by Jennifer A. Slivka. This text may be archived and redistributed both in electronic form and in hard copy, provided that the author and journal are properly cited and no fee is charged for access. 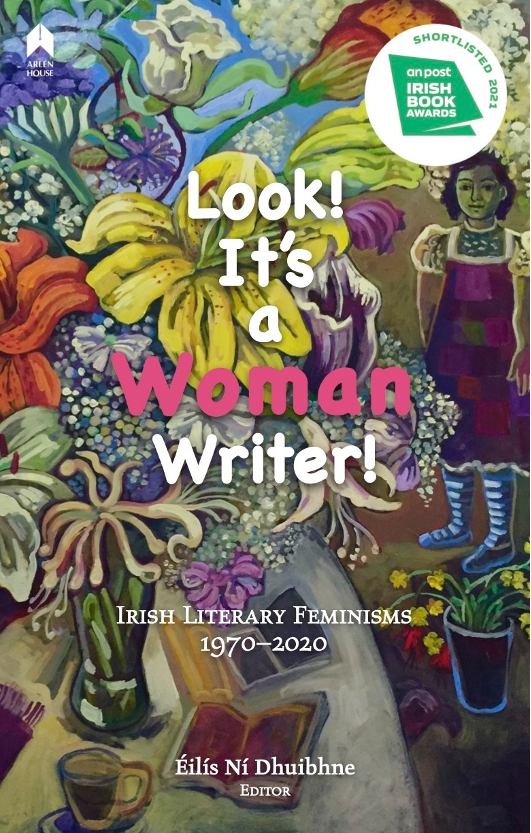 Recognition of pioneers in Irish feminist publishing begins immediately in Look! It’s a Woman Writer!: Irish Literary Feminisms, 1970-2020. After the title page, in large font, editor Éilís Ní Dhuibhne declares, “We stand on the shoulders of giants,” paying tribute to Catherine Rose, Eavan Boland, Dr. Margaret MacCurtain, Róisín Conroy, and Mary Paul Keane. The collection of twenty-one essays continues this project of recognition by showcasing covers and informational snippets about ground-breaking books, anthologies, and journals by feminist writers in Ireland from the 1980s and 1990s on certain verso pages. These visuals merely underscore the fact that Irish women writers have not received the kind of attention their male peers – aka “just writers”- received from publishing houses, critics, and even university syllabi. Indeed, the inspiration for assembling this collection of essays came to Ní Dhuibhne after the 2015 Waking the Feminists movement, which was created to “protest against the poor representation of women playwrights in the Abbey Theatre’s programme commemorating the centenary of the 1916 Easter Rising” (13). Many of the complaints raised by the younger generation in the Waking the Feminists movement reminded Ní Dhuibhne and her “sister writers and friends, mostly aged sixty and over, of the points we had been making since the 1970s and 1980s” (13). Although they supported the movement’s critique of gender inequality in the Irish theatre world, Ní Dhuibhne “felt that the earlier revolution regarding gender issues in Irish literature had already been largely forgotten” (13), as was the male-dominated literary landscape that women writers of the 1970s-1990s had to navigate, writers whose work paved the way for subsequent generations of female writers.

Ní Dhuibhne asked the contributors, who hail from both the north and south, write in Irish and English, and across various genres (i.e., fiction, drama, and poetry), about their journeys to becoming a writer. She believes “the change regarding gender representation which has occurred in the field of literature to be more revolutionary, profound and historically significant than anything else that has happened in the closing decades of the twentieth century. It is a story which needs to be told” by the writers themselves (14). These writers were born mid-century and came of age during the transformative decades of the 1960s and 1970s. One of the notable commonalties emphasised throughout the collection was the introduction of free secondary education in 1966 and the introduction of university grants in 1967. In the Forward, Martina Devlin states that “with secondary school education now freely available irrespective of gender and family circumstances, girls learned something with far-reaching consequences. The female mind was smart – every bit as keen as the male’s […] Those with the writing gene were given a fighting chance” (12). The Irish Women’s Liberation Movement of the 1970s and ’80s also heavily influenced the majority of the contributors in both their personal and professional lives.

There are common themes throughout the collection. Most of the contributors track their love of literature from a young age, most frequently citing the work of Enid Blyton and Jo March from Louisa May Alcott’s Little Women as inspirations. This early reading sparked their interest in writing, and public libraries were often viewed as refuges for several writers. Yet, interestingly, several writers did not start to write until the economic downturn of the 1980s; it was a “now or never” moment. For example, Liz McManus found the economic recession liberating, as there was “no architecture work to be had […] and [she] became a full-time mother […] and began to write seriously” (281). On the other hand, several writers felt as though they had to choose between being a mother or a writer. The social and cultural mores that Irish women writers had to overcome, which were often internalised, feature significantly throughout the collection. Mary Morrissy calls this internal “virus of doubt” and failure, the “Cringe” (53). This self-doubt, which arises from internal and external expectations, manifests in questioning one’s status as a writer; whether or not work deserves to be published or not; whether writing is worth it; or if a woman writer can make a living solely as a writer (all contributors say “no”). Catherine Dunne describes how writing began for her as a private act to help with the grief of a stillbirth, but turned into a “privacy laced with something that feels as toxic as shame” (114-15). Dunne notes that “Mary Beard might have something to say about that: about how women work under the cultural constraints of silencings that are so pervasive we have almost ceased to notice them” (115). Mary O’Donnell echoes this when she describes her experience studying abroad in Germany in 1970: “A young victim of cultural inferiority, I am occasionally crushed by the feeling that nothing Irish is quite as good as things elsewhere” (156). Ageism only intensifies the Cringe, or what O’Donnell labels “the gendered perspective,” which creates “an obscuring or ignoring of the written work of older female authors” and a “sneaking question in the minds of some people: but is women’s writing any good? – invoking the perennial doubt about the mere possibility of female genius” (159). Like others in the collection, Mary Rose Callaghan addresses the double standard for older women writers, explaining that “age is not an impediment to writing but it could be to getting published […]. Age and appearance are considerations for women in ways that would never exist for men, who are always either writers or men, never men writers” (291).

Many writers sought to give an authentic voice to women’s lived experiences through the act of writing, as Lia Mills did for survivors of sexual assault through her fiction, but many ran into difficulty when faced with the male-dominated publishing field of the late-twentieth century. Ceila de Friéne describes the poetry scene of the early 1990s as “being not only dominated by men, but that nature formed the theme of many poems which were, naturally, celebrated within a rural setting. There seemed little place in the canon for my poems which had an urban setting and which were surreal in style” (258). Most male editors were gatekeepers whose authority dictated what was considered not only publishable, but worthy of the label “literature.” In the afterword of the collection, titled “Irish Literary Feminisms, 1970-2020,” Alan Hayes, Arlen House publisher, outlines a condensed history of Irish women and publishing, and notes that the “publishing world continues to downplay serious literary writing by women under the frivolous chick-lit moniker” (346). In the subsection, “A Brief Snapshot of Mainstream Irish Publishing,” Hayes identifies Poolbeg Press’s first editor, David Marcus, as publishing “an impressive list which was developed not from a feminist consciousness but from his commitment to short fiction which didn’t discriminate on gender grounds” (346). Indeed, the majority of contributors cite David Marcus as the editor who gave them their first publication. However, Evelyn Conlon, who had two short stories published by Marcus, draws attention to the fact that he was still a major gatekeeper. She notes that he was a “much-respected figure, a person who came to have a lot of say in how the Irish short story would look from the 1970s onwards. Or at least the ones that were published – not to mention lauded and prized. But somehow, after those two were written my next endeavours were deemed not suitable” (185). According to Conlon, it is because her subject matter changed, “the literary view of women was not keeping pace with the real lives that I was watching. No pageant was being made of our actual thoughts and of how we saw our world” (185-186). But this is where the Irish feminist publishers stepped in.

Hayes highlights the contributions those five pioneers made to the field, and also maps out the literary landscape of the time period, specifically focusing on Irish feminist publishers founded during the 1970s and 1980s: Arlen House, Irish Feminist Information, Women’s Community Press, Attic Press, and Women’s Education Bureau. He notes how these feminist presses “broke new ground, challenged authorities and markets, and created a new vision of Irish publishing. The repercussions of this continue to be felt today” (314). Many of the authors featured in the collection had their work published by at least one of these presses. Several of the contributors also acknowledge the importance of women-only workshops, most notably those spearheaded by Eavan Boland, which supported their continued development as writers.

Others from Northern Ireland had different experiences from their counterparts in the Republic, as the violent backdrop of the Troubles and sectarian politics were inescapable influences on their lives. This is seen first-hand in Anne Devlin’s essay. Medbh McGuckian describes how she was the only woman at her first poetry reading in St Malachy’s College, and “in the 1970s the whole scene became militarised, while the literature course at Queen’s was even more colonial” (232-33). Both northern and southern contributors emphasise the lack of female writers on literature syllabi when they attended university. Although Sophia Hillan recounts how wonderful it was to be a student at Queen’s University Belfast when Seamus Heaney was teaching there, McGuckian outlines the gender bias of the literature course where the only female writers included on the syllabi (Dickinson and Plath) were “portrayed as weird or suicidal” (233). University College Dublin was not much better. In the 1960s Máiríde Woods described the English syllabus as being “designed to put a young person off […] read[ing] minor texts by dead authors” (269-70), and in the 1970s, Ní Dhuibhne states that only Jane Austen, Emily Brontë, and Emily Dickinson were covered during the three-year program. Mary Dorcey notes that it was not until her final year at school that she discovered Edna O’Brien and Elizabeth Bowen and, later, Kate O’Brien (242). These works along with the student politics of the 1960s and 1970s, greatly influenced Dorcey; she was one of the founders of the first gay rights group in Ireland.

Despite the commonalities in the collection, reading the essays is like dipping into twenty-one different memoirs. Each contributor approaches the topic in their own way, from Cherry Smith’s numbered sections that take us through the stages of her writing life in a sort of modernist, stream-of consciousness style, to Mary Morrissy’s essay written in the second person, to the more traditional autobiography that most writers in the collection use, though even that ranges from major milestones over the course of their literary and personal lives, to one or two impactful moments that informed their identity as a writer. There are also great differences around the topic of geography. For some writers like Moya Cannon, the rural landscapes of childhood were an inescapable muse, whereas for others like Mary O’Malley, “not being from Dublin or Northern Ireland was a far greater obstacle than womanhood” (170). Yet all of the contributors emphasise a similar point: they write for themselves, either because they want to or need to. Most of the authors cannot pinpoint an exact description of this creative urge, they only know that it is something they cannot ignore, and neither should we. This collection is supremely personal; yet these women’s experiences are part of Ireland’s national story. These parallel and often intersecting stories are crucial readings for those interested in twentieth-century Irish writing, and more importantly, in Ireland beginning to recognise the valuable literary contributions its women have made.