by Constanza del Río-Álvaro. This text may be archived and redistributed both in electronic form and in hard copy, provided that the author and journal are properly cited and no fee is charged for access. 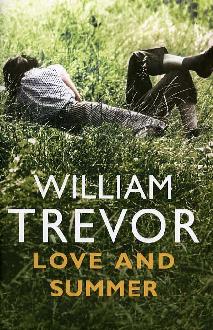 Love and Summer by William Trevor

Faithful to his practice of alternating short stories and novels, after his collection Cheating at Canasta (2007) William Trevor has recently published a new novel, Love and Summer(2009). In it Trevor chooses provincial Ireland — the Ireland of his short fiction and life experience, the Ireland of the small town and scattered farms on the hills  —  to stage a moving drama that develops during a hot summer in Rathmoye, Co.Tipperary, in the 1950s. The world of the Big House, so central in many of Trevor’s previous novels about Ireland, has become in Love and Summer just a ruined and ghostly presence, but one that will nevertheless play a crucial role in this novel’s unexpected denouement. Most of the narrative, though, is infused with the feel of the small town and the farm; a world of tractors, cows and Rayburns, of pubs, lodging houses, Bovril and Bisto.

Rathmoye seems to be a place where nothing happens, or so its people say. Yet, a knowing narrative voice soon ironically alerts the reader: “That nothing happened was an exaggeration too” (3). After an initial section of omniscient narration and bird’s eye view to present the town and some of its inhabitants, the focus starts to fall alternately on the main characters, all of them introduced with economy of means coupled with psychological depth, this being an art in which Trevor excels. Thus we learn that in Rathmoye there is indeed a lot going on, if only emotionally, under a calm surface. Some characters are haunted by their pasts and corroded by guilt, resentment or a sense of failure. Others, it is true, are content with what they have since there is so very little they have been taught to expect from life. For ones and the others, things will change with the arrival in town of a stranger, Florian Kilderry, a young man who will inadvertently set in motion the characters’ desires and feelings, including his own.

There is Ellie, a young, beautiful, childish and innocent foundling, the heroine of the novel. Raised in an orphanage where furniture, clothes and schoolbooks had all been passed on, and educated by nuns, she has learnt to accept and be grateful, and considers that she is fortunate to have been hired as a maid and then proposed marriage by Dillahan, a widowed farmer older than Ellie whom she does not love. Ellie’s discovery of love with Florian plunges her into an emotional turmoil from which she will emerge, if not unscathed, at least more experienced.

There is Dillahan, Ellie’s husband, a silent man always kind and gentle with Ellie. Permanently worried about his farming and the new field he wants to buy, Dillahan is secretively haunted by a sense of shame and guilt for the tragic accident in which he ran over and killed his first wife and child. His only solace is his young new wife who, as he confesses, has made it easier for him by helping him to confront his irrational fears.

Florian Kilderry is the stranger, a young Protestant man in search of his own destiny and a place he can call home. When he cycles for the first time into town to photograph Mrs Connulty’s funeral, he immediately attracts Ellie’s and Miss Connulty’s attention. Only son of bohemian and gifted parents  —  lapsed Catholic Italian mother and Anglo-Irish father  —  he nostalgically idealises his dead parents, their lifestyle and their mutual love and devotion. He feels he failed them in their artistic expectations for him and he moves though life letting things happen, only realising the consequences of his thoughtless acts when it is frequently too late. Now he has made the decision to sell the family country house and immigrate toScandinavia. Burning and disposing of the contents of the house convey Florian’s symbolic goodbye to his parents and memories of the past, and his intention to start from scratch and find his way in life. Yet, while getting ready for his final departure and chosen exile, during the hot season he gets involved in an adulterous love affair with Ellie. For him, this relationship is just a summer friendship; a casual relationship similar to previous ones and pursued for the same reasons, that is, to help him forget his unrequited love for his Italian cousin Isabella: “This beginning was as previous beginnings had been, its distraction potent enough already. Isabella would never be just a shadow, but this morning an artless country girl had stirred a tenderness in him and already his cousin’s voice echoed less confidently, her smile was perhaps a little blurred, her touch less than yesterday’s memory of it” (84).

The novel starts with Mrs Eileen Connulty’s funeral and the reader is soon offered an insight into her daughter’s consciousness. Miss Connulty is a middle-aged single woman, whose hatred and resentment at her unsympathetic and domineering mother and secret joy in her death are superbly expressed in how she fondles her mother’s jewellery, now finally hers. Miss Connulty keeps her past secrets too: in her youth she had a love affair with a married English man who disappeared leaving her pregnant. Against the mother’s will, Miss Connulty’s father took her to a Dublin chemist’s shop to terminate the affair. Fond as she is of watching people from her window, Miss Connulty soon realises that something is going on between Florian, “a plunderer” (88), and innocent Ellie. Influenced by her own experience, Miss Connulty will try to protect Ellie from a destructive liaison, as if Ellie were the child she could never have.

There are in Love and Summer other secondary characters, such as Joseph Paul Connulty and his devoted secretary, Bernadette O’Keeffe, excellently realised, but one deserves special mention for the role he will unwittingly play in the novel’s conclusion. This is Orpen Wren, the fool, the madman who tells the truth even when he is fantasising or confusing the present with the past. Orpen was librarian of the St Johns, the Anglo-Irish family who left the county many years before. Only the gate-lodge remains now of Lisquin, the St Johns Big House, but, loyal to the Anglo-Irish family, Orpen still awaits their return and lives “in both the present and the past” (42). So potent is his desire that it is materialised when he mistakes Florian for George Anthony St John, old George Freddie’s grandson.

With these characters and these raw materials Trevor weaves a drama where chance, loneliness, bitterness, nostalgia, guilt, shame, acceptance and generosity play a fundamental part. While the reader follows the protagonists in their daily chores, tasks or activities, magnificently and realistically detailed and narrated, s/he glimpses their innermost desires and feelings as well. There is irony in the narrator’s approach, but sympathy too. At the end of the novel, one gets the feeling, and this differentiates Love and Summer from previous novels by Trevor, that the characters are finally spared a tragic fate. The events of that hot summer bring about a sense of catharsis in some characters or the ability to learn and mature in others that redeem them and help them accept and confront life. This is a novel to be relished, read and reread. Only William Trevor can write a passage such as the following one: “The events of that day had not receded for Miss Connulty. Her cruelty to the dead was their ceremonial preservation: the time for pain was over, yet her wish was that it should not be, that there should always be something left  —  a wince, a tremor, some part of her anger that was not satisfied” (76).