by Elsa Meihuizen. This text may be archived and redistributed both in electronic form and in hard copy, provided that the author and journal are properly cited and no fee is charged for access. 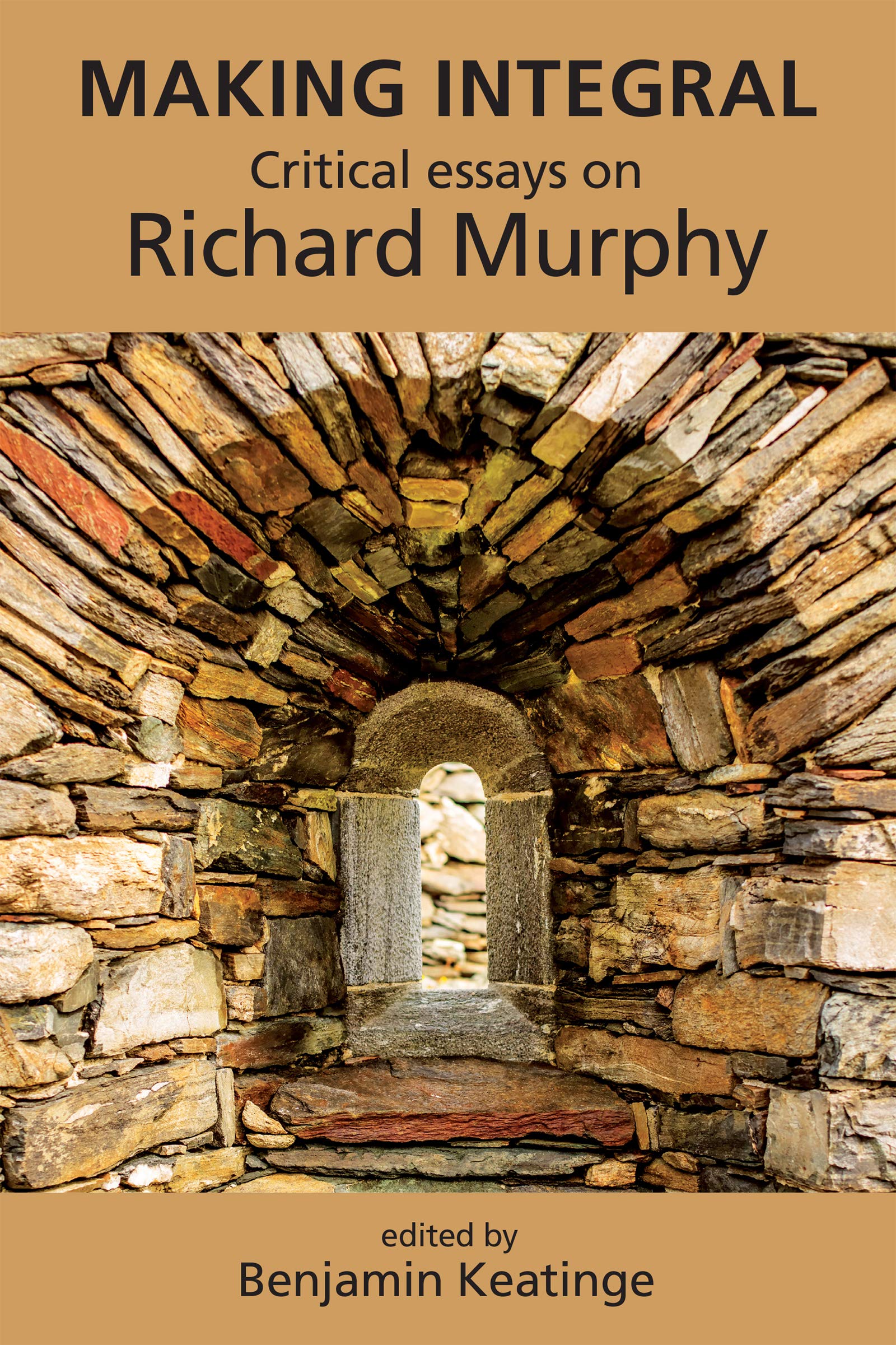 Benjamin Keatinge, editor of Making Integral: Critical Essays on Richard Murphy, states in his introduction that the central concern of this publication is “to show how Richard Murphy has made ‘integral’ in his poetry a set of diverse experiences – his own and those of others – along with incidents from the wider panorama of history and geography, in ways which show the poet seeking definition of himself through others” (2). The essays included in this substantial work indeed succeed in reflecting the diversity, complexity, and broad-ranging concerns of the poetic achievement celebrated, and of its remaining importance both within an Irish and a broader literary context.

One of the important underpinnings of Murphy’s poetic achievement evidenced in the studies included here is the autobiographical centre of his writing. This insight forms an important point of departure, or an underlying premise, in several of the essays, as typically expressed in Joseph Sendry’s discussion of Murphy’s sense of history encapsulated in the concept “aftermath”. The critic points out here that complex, sometimes obscure, biographical references characterise much of Murphy’s work, and that, therefore, not only factual data about his life are often needed to elucidate the poems, but, in order to uncover the poems’ multiple layers of significance, Murphy’s writing “must also be placed within several interlocking matrices: genealogical, social, national, historical, even world historical” (127). The explanation for this tension between the self and the other can be found, as argued convincingly by Benjamin Keatinge, in Murphy’s “… ‘impossible’ situation as belated Anglo-Irishman in mid-twentieth-century Ireland” (3) which, on the one hand, informs an acute feeling of exclusion, but, paradoxically, also helps him to feel an affinity with the wide range of voices celebrated in his poetry. In several of the essays valuable information is provided on the sources in which Murphy, especially in his later years, documented autobiographical information to assist the reader in uncovering this multifaceted significance of his poetry. These sources include: interviews and radio broadcasts; critical reviews of older and contemporary poets’ work; extensive notebooks kept for four decades; his memoir, The Kick; notes on the genetic process of the sonnet sequence The Price of Stone (published initially in Poetry Ireland Review and collected and expanded in In Search of Poetry (2017); and the prose sections included in The Pleasure Ground: Poems 1952-2012 (2013). The indivisibility of Murphy’s autobiographical writing from his poetry is underlined in Barbara Brown’s account of her first-hand experience of the making of The Kick. In discussing the process of selecting material for the memoir, Brown quotes from one of Murphy’s notebooks where, while composing The Price of Stone, the poet states his belief that although the poem is not autobiography, autobiography is one of the building materials you need to construct a poem. Brown reminds us that much of Murphy’s poetry can also be characterised as narrative, and that, for instance, the narrative in The Price of Stone corresponds to that of The Kick.

The golden thread running through the narrative of Murphy’s life as reflected in his poetry and life writing, is the quest for a secure identity. In his contribution to this publication Maurice Harmon describes the root cause for this quest as “division and distress” (11), and points to a family background divided between colonial Protestant Anglo-Irish and conquered Catholic peasant, an education divided between British rationality and Irish sensuality, aspirations contrasting the rigidity of the rectory and the military with the wildness of the cottage and the sea, and a divided sexuality. One of the decided strengths of the book is the depth of attention given to these complexities that comprise Murphy’s identity, and to the ways his writing reflects his efforts to resolve these complexities. In the poet’s own words –“to look inward at the divisions and devastations in myself as well as in Ireland” (Murphy, The Pleasure Ground 255).

A number of studies focus on the exploration of these “divisions and devastations” offered in the longer narrative poems, The Battle of Aughrim, The God who Eats Corn, and The Price of Stone, drawing on existing critiques, but also offering new insights and perspectives. An important point of consensus reached in these studies (and echoed in the volume generally) is that Murphy’s creative work has a universal and timeless quality, and that his concern with the fractured and often conflicting nature of the human condition plays an important role in this achievement. This quality of Murphy’s work was not always appreciated or acknowledged, as pointed out by Siobhán Campbell and Tara Stubbs. With reference to an earlier review of Murphy’s work, Campbell argues that “the kind of literary criticism of birth, of upbringing and therefore of expected affiliation with which we are all too familiar in Irish letters” (112) often stood in the way of a full appreciation of Murphy’s inclusivity of thought reflected, for instance, in The Battle of Aughrim, a poem she regards as “applicable to our violent present”, and that “seems to speak directly to our now” (125). Taking as point of departure an earlier judgment detecting an unease and programmatic quality in Murphy’s preoccupation with shaping his inheritance into a poetic theme, Stubbs explores the shaping of inheritance in The Price of Stone. She sees the accusation of unease “upturned by The Price of Stone, because Murphy places his unease at the centre of things”, and she offers the insight that “The ventriloquized ‘unease’ of Murphy’s self-acknowledged ‘split mind’ becomes instead the bastion of the sequence – at once its cause, its symptom and possibly, also its cure” (221).

The quest for a secure identity informed by division, duality and insecurity is also manifest in Murphy’s writing as a search for structure, ranging from the need for a settled, principled way of life, to a preoccupation with physical construction and reconstruction of buildings and boats, to the creation of the well-written word or line. It could be seen as sadly ironic then that the author’s life remains marked by “[a] sense of loss, being lost, and of leaving a life behind, unfinished, incomplete” (49), as concluded by Gerald Dawe in his essay focusing on this aspect of Murphy’s oeuvre. An important result of Murphy’s search for structure is his moving between different geographies, which is also ironic in certain respects. The irony is evident, for instance, in the phrase “fluid geographies” included in Philip Keel Geheber’s study of Murphy’s poetics of place. Here it is shown that Murphy relates geographical relocation to the crossing of boundaries, transgression of received limits, and to both creative and destructive processes. Similarly, Lucy Collins sees Murphy’s gravitation towards the island as both a dwelling place and artistic inspiration, as essentially a move to a place of origin, but also as the articulation of a profound sense of separateness, of reworked temporal and linguistic histories, which “speaks to the radical displacements of our age” (77). Michael J. Moir Jr also points out that, even when Murphy set himself the task in The God who Eats Corn to write a poem in his father’s honour, the result is the depiction of a space characterised by instability, encroached upon by violence and disorder.

Arguably, one of the most moving passages included in Richard Murphy’s memoir is the poet’s account of his father’s death and burial in 1965. After describing in characteristic, almost cinematic, detail this traumatic experience within the family, Murphy narrows the focus to his own relationship with his father. This has evidently been a strained relationship, reflected here in Murphy’s references to fundamental differences in basic principles and life choices, which for his entire life has made talking to his father difficult. His father had represented, however, a “firmament of power” for him, and Murphy’s way of dealing with this loss was to collect “trailer-loads of pink granite from the remnants of seven abandoned cottages near Cleggan, to build a new house out of the old and replace in stone the lost firmament” (Murphy, The Kick 248).

A desire to preserve, to secure for posterity, has been, from a very early age, an important reason for Murphy’s ambition to write poetry. The poet writes in his memoir that as a boy he “took refuge in the Renaissance conceit that a poem, if well made, could last longer than its maker, giving life after death to himself and his loved ones in the minds of his readers (Murphy, The Kick 85). I would argue that Making Integral: Critical Essays on Richard Murphy testifies to the fact that, even if Murphy has not always been able to preserve and secure the firmament of his personal life, he has certainly succeeded in leaving for posterity the well-made poetry he dreamt of writing in his youth. As part of his Acknowledgements in the opening pages of the volume Benjamin Keatinge expresses his regret that Richard Murphy has not lived to see the outcome of the project undertaken when he was still alive. Indeed, but Richard Murphy would approve of this tribute to his achievements – not only for the quality of the scholarship contained in its pages, but also for its making Murphy’s voice better heard, indeed integral, in Irish letters, in other poetic traditions, and amongst those of other poets who served as inspiration or who helped to shape his writing, such as W.B. Yeats, Ted Hughes, Dennis O’Driscoll, Philip Larkin, Theodore Roethke, Ezra Pound, and Robert Lowell.