by Elisa Pezzotta. This text may be archived and redistributed both in electronic form and in hard copy, provided that the author and journal are properly cited and no fee is charged for access. 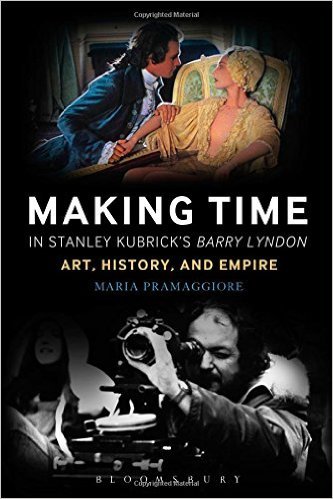 I consider Stanley Kubrick one of the major auteurs of the twentieth century because whenever I re-watch one of his films, my viewing experience changes. And time is for me one of the more compelling concepts. Although our life is dominated by it, we are unable to grasp it: it is omnipresent, but abstract, it schedules our days, but melds our present with our past and future and, even if we live for a few decades, it discloses to us the idea of eternity. Although the pace of time is measurable and perfect, our experience of it is always different, much like my experience of Kubrick’s oeuvre. Thus I welcomed Maria Pramaggiore’s book with enthusiasm because it proposes a discussion of how one of the greatest directors ‘created’ time, sharing his experience of it with us.

Stanley Kubrick’s Barry Lyndon (1975) was adapted from William Makepeace Thackeray’s novel The Memoirs of Barry Lyndon, Esq., Of the Kingdom of Ireland (1856). The story follows the rise and fall of Redmond Barry (played by Ryan O’Neal in the film) during almost all of his life: from the 1750s, when his father is killed in a duel; through the Seven Years’ War (1754-63); to the final scene set in 1789, when the French Revolution began. American audiences failed to relate the Vietnam War, which ended in 1975, the year the film was released, to the Seven Years’ War, which is regarded as one of the first world wars because of its imperial ambitions. The protagonist Barry is an Irishman; the Calcutta-born Thackeray was English and married an Irish woman; and Kubrick was an American director living and working in the United Kingdom, who began to shoot his Barry Lyndon on location in Ireland, but had to retreat to the United Kingdom after the IRA’s campaign of violence in 1972. These clues let us realize how much history and Irishness, from a national and transnational, colonial and postcolonial point of view, are intertwined in the diegesis of the film and in the extradiegetic context of the history of its making and reception. Kubrick is an auteur and “Thackeray’s inquiry into fictional and historical narratives provides Kubrick with a means of addressing the relationships among narrative form, history, and cinematic time, a nexus of interest that recurs throughout the director’s films” (26).

Pramaggiore summarizes her goal when she explains: “I became interested in the way Barry Lyndon produces temporality, and I began to think of the way emotions and critical judgements are intertwined in that process as the creation of aesthetic time” (9).

Paradoxically, the majority of the criticisms of the film concerned its temporality, although scholars have not previously discussed this controversial feature in depth. Firstly, the film’s production period was considered excessive, but the director had to deal with several unforeseen difficulties. Secondly, the film’s genre, costume drama, was perceived as obsolete although, during the 1970s, both the American and British film industry released period films. Barry Lyndon’s failure was a consequence of its implications of genre, gender, and stardom: it is a costume drama, a literary adaptation, and an epic; it participates in “the feminization of history achieved by the costume romance film” (185); and Ryan O’Neal’s star persona was that of a “feminist man” (186). Finally, the film’s running time, 184 minutes plus intermission, was judged exaggerated, despite other films of equally excessive length being released in the 1970s.

Robert Altman, Ingmar Bergman, Bernardo Bertolucci, Francis Ford Coppola, Rainer Werner Fassbinder, David Lean, and Stanley Kubrick “have been retroactively designated the progenitors of ‘slow cinema’” (19). Barry Lyndon’s slowness is achieved through its ASL of 13 seconds, long takes, centred, static compositions, characters and objects that move slowly, and the circularity of narrative that at the end brings its protagonist back to his Irish, humble origins.

These features are responsible for the charges of boredom made against the film. Pramaggiore cites Heidegger’s third form of boredom, profound boredom, because this mood “redirects attention to thought itself and to the passage of time” (41). Although profound boredom is an incisive concept to explain how spectators are led, through slowness, to reflect upon time, and was used, for example, by John Rhym to comment the last scene of L’eclisse (Michelangelo Antonioni, 1962), it does not clarify why the majority of the viewers are simply bored by the film. Slowness is a vehicle of profound boredom for those viewers who enjoy the slow pace of the film because it urges them to think about time; but the majority of the spectators impatiently wait for the film to end. Why is there this difference among viewing experiences? This question, posed indirectly, is left unanswered.

Both Thackeray and Kubrick were interested in the figure of Napoleon: the writer met the leader twice, wrote several times about him, and set Vanity Fair (1848), which the director considered adapting, during the Napoleonic Wars; and Kubrick did extensive research around shooting a film about the Emperor. Following the chronology of history, the story of Barry Lyndon ends in 1789, the year of the beginning of the French Revolution, when Napoleon rose to prominence, and Barry’s braveness foreshadows Napoleon’s. Following the chronology of Kubrick’s projects, Napoleon precedes Barry Lyndon, and the Emperor’s ambition and failure mimic Barry’s rise and fall. The fascination with Napoleon is not the only link between Thackeray and Kubrick: they shared physical and biographical resemblances; they adopted caricature and satire to lay bare the hypocrisy of the military and high society; and they believed that visual imagery can create a tension with narrative elements producing “a temporal delay in the experience of reading or watching. This is the structure that produces the possibility of aesthetic time, of thinking and feeling” (67). In Kubrick’s film the intertitles, the third-person voice-over narrator, the juxtaposition of paintings and characters, and the reverse zoom translate the temporal delay that in Thackeray’s faux memoir is achieved through the adoption of a first-person unreliable narrator.

Through the strategy of narratus interruptus, both the writer and the director “foreground the cause-and-effect sequence through which the events are represented, providing a particular experience of narrative while at the same time asking readers and viewers to think about that form of time” (95). This technique, together with the back and forth, unreliable reading and watching process, challenges the idea that individuals’ wills and actions shape history, and that the latter follows a straight, chronological timeline directed towards progress. Thackeray’s novel is an adaptation of his The Luck of Barry Lyndon: A Romance of the Last Century, edited by George Savage Fitz-Boodle, published in instalments in Fraser’s Magazine (1844). The temporal delay of the publication of the instalments underscored that of the readers’ experience, and is adapted by Kubrick through interruptions, pauses, and the intermission. In the cinematographic medium, slowness expands the experience of the present moment that, thanks to the plot, is haunted both by the past, the killing of Barry’s father, and the future, the death of Barry’s son. Past, present and future coexist, as in Henri Bergson’s duration and Gilles Deleuze’s time-image. The film is defined as a palimpsest because, under the layer of present structures, it discloses strata of past designs. Voice-over narration, intertitles, the choice of staging Barry’s marriage in Part II, entitled “Containing an Account of the Misfortunes and Disasters Which Befell Barry Lyndon”, and the several changes of the protagonist’s name, disclose that histories and identities are revised over time. “Thackeray and Kubrick’s rejection of historical realism is also a realization that history is an aesthetic endeavour” (109).

The film’s narration and its production process undermine the causal logic and the linearity of colonial time, introducing repetitions, circularities, and a return of the repressed. On the one hand, the recurrence of duels, fights, and deaths imbues the narration with cyclical patterns; on the other hand, the IRA’s violent actions envelop the film’s production with British colonial history, the film’s historical background. Moreover, thanks to slowness, the characters’ facial and physical expressiveness, musical choices, the mise-en-scène and reverse zoom shots that isolate the protagonist, the director represents Irishness through the ideological frame of a postcolonial or racial melancholia. The latter is related to Irish national identity because “it implies a pathological inability to recover from the losses suffered under centuries of British colonial rule” (133). Similarly, Barry’s colonial Irish body can be described by the figure of the “Anglicized Celt”, which “is defined doubly by a thwarted ambition to acquire an unattainable Englishness and a repressed identification with a Gaelic culture that is reviled and revered” (130). As Kubrick’s production remained trapped in the cyclical temporalities of postcolonial conflict, the wanderer Barry is imprisoned in the repetitions of losses and failures: Barry Lyndon is an Irish odyssey.

Together with melancholia, Kubrick adapts another ideological frame that participates in a colonialist figuring of Ireland, and that regards the relationship between landscape and portrait painting: the eighteenth century debate about the beautiful, the picturesque, and the sublime (46, 128, 154). Pramaggiore adopts the word sublime to connote Barry’s violence (137, 142), and Irish violence (139), and to contrast it with the picturesque landscape (137, 142), and the rational (184). In Chapter I, as in the Introduction (10), she claims: “This experience (of aesthetic time), which allows for the synthesis of affect and judgement, should not be confused with the aesthetic of the Romantic sublime” (39); but she uses the expression “sublime linguistic confusion” (77), and a paragraph of Chapter I is entitled “Boredom, or the slow sublime”. The relation between boredom and the sublime, and the connection between slow and sublime remain unclear to me; and the title, linking the experience of time and the sublime, seems to contradict the statement cited above.

Whereas the other chapters discuss the “irreversibility of events (the sense of before and after)”, and the “repeatability of events”, Chapter V regards the “contemporaneity of the noncontemporaneous (or, the coexistence of multiple time)”, that are, according to Reinhart Koselleck, “the three primary modes of temporal experience” within modernity (45). The latter is present in the film through: anachronism, with the adaptation of the nineteenth century painter Adolph Menzel to shoot candlelight scenes, and the choice of Franz Schubert’s Piano Trio in E Flat composed in 1827; and the use of paintings in the mise-en-scène that allow a comparison between the spatio-temporal experiences offered by the cinematographic and the pictorial medium. The spectators’ oscillation between these two media highlights both the characters’ entrapment in their social milieu and in the aesthetic forms that surround them, and the viewers’ reflections about the characters’ role in history and fiction. Kubrick adopts eighteenth century paintings because they embody the charm of history, help to create the mise-en-scène and, at the same time, suggest that other media have taken the place of painting. Moreover, if these paintings are adapted to recreate the reality of the eighteenth century, they lay bare the relativity of the idea of realism, and reproduce the rhetoric of colonization.

This brief review cannot do justice to Pramaggiore’s interesting and compelling work. The book offers considerable information and explanation, much of which was obtained through research carried out at the Stanley Kubrick Archive and at the Warner Brothers archive, and stimulates the reader to pose other questions: it allows for a “synthesis of affect and judgement”.