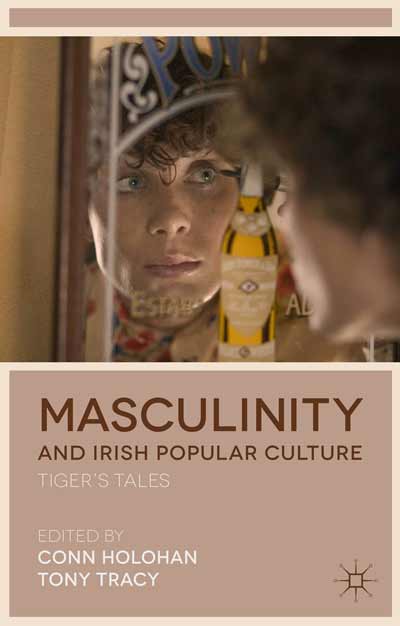 Masculinity Studies has certainly experienced a dramatic flourishing in Irish Studies in recent years, with a number of monographs and edited collections published in this area since 2010, including Fintan Walsh’s Male Trouble: Masculinity and the Performance of Crisis (2010), Brian Singleton’s Masculinities and the Contemporary Irish Theatre (2010), Caroline Magennis’ Sons of Ulster: Masculinities in the Contemporary Northern Irish Novel (2010), Joseph Valente’s The Myth of Manliness in Irish National Culture, 1880-1922(2011), Irish Masculinities: Critical Reflections on Literature and Culture, edited by Magennis and Raymond Mullen (2011), and Debbie Ging’sMen and Masculinities in Irish Cinema (2013). Conn Holohan and Tony Tracy’s collection, Masculinity and Irish Popular Culture: Tiger’s Tales, published in 2014 by Palgrave (a press which has a notable catalogue in the area of masculinity studies, and indeed published a number of the aforementioned texts) places itself firmly within this burgeoning field, stating in its introduction its desire to “offer a provocative […] overview of the myriad ways in which Irish masculinity has been imagined and reimagined into being within cultural texts” (4). The collection arises from a conferenceon the subject held in NUI Galway in 2011, and comprises a hefty sixteen essays, on a variety of subjects and across a variety of disciplines, including sports, popular culture, music film, television, fiction and drama. Such a number of essays certainly promisescope, although there are a number of overlaps between the essays that perhaps work against this potential. There are three chapters on music, for example, and two on post-conflict Northern Ireland – and some of the chapters cover critical and cultural territory already comprehensively interrogated (and not always in particularly new ways). Perhaps the editors could have used this generous canvas to further increase the breadth of the collection – for example, there is little by way of sustained analysis of race and ethnicity, outside of a brief though engaging discussion in ZélieAsava’s essay on “othered” masculinity in Celtic Tiger cinema, and only one essay that deals with recessionary configurations of masculinity, Diane Negra’s astutely observed closing essay, “Adjusting Men and Abiding Mammies: Gendering the Recession in Ireland”. The collection itself is organised along vaguely formal lines, sometimes helped by obvious connections: the three essays on music comprise “Musical Masculinities”, there’s a section on theatre and fiction, and a section on masculinity on screen (although the sections on queer masculinities, and the odd final section on post-Tiger masculinity, which consists solely of Negra’s essay, seem oddly constituted within the overall logic of the structure). Tracy and Holohan’s introduction, however, does a good job of creating structural and thematic connections between the essays, and solidly lays out the importance of interrogating masculinity and its socio-cultural contexts, and the way in which “gendered bodies function to work through social shifts and tensions” (7).

The editors note rightly in their introduction the dominating influence of R.W. Connell’s theory of hegemonic masculinity in the field of masculinity studies generally. It’s a pity, therefore, that the collection is as a whole somewhat uneven in its taking up of alternative critical tools with which to complicate the ideological construction of Irish masculinity. The editors comment specifically on the critical underpinnings of the collection in the introduction, speaking favourably of a move away from a (post)colonial framework of analysis, and praise the contributors for “considering masculinity and its functions in under-explored fields and texts … and by drawing on the insights into gender and sexuality by disciplines such as queer studies” (4).Of course, this form of critique has a long history in Irish Studies, particularly in the feminist and queer scholarship of Gerardine Meaney, Kathryn Conrad, Elizabeth Butler Cullingford, Joseph Valente, Patricia Coughlan, Moynagh Sullivan (amongst many others), which seeks to problematize and challenge the postcolonial, epistemological and ontological discourses of Irish national culture, identity and gender. However, only a small number of the essays demonstrate a real critical awareness of this field. Of course it’s key to avoid discursive reification or canonisation, but given that much of the work here is indeed directly addressing the intersections of masculinity and nation, it seems important to retain a sense of this analytictradition in order to avoid reductive, simplistic or ideologically charged dichotomies of gender, national identity, and authenticity. Neither is there much by way of reference to alternative, non-nationally focused paradigms within masculinity studies itself – for example, the significant body of work on the masculine body in film and screen studies over the last two decades, including a number of monographs and collections by Kaja Silverman, Richard Dyer, Yvonne Tasker, Linda Williams, Steven Cohan, and Peter Lehman.However, this issue is not specific to the collection per se, but perhaps an element of a growing field that is still finding its (critical) feet.

The best essays in the collection are those that move beyond the notion of hegemony covered so rigorously by Connell, as well as the simplistic “masculinity-in-crisis” model that typifies much of the critical work on contemporary masculinity, and instead productively read masculinity in terms of postmodernism, queer theory, affect theory, performance studies and textuality. Annabel Sheehan’s reading of Patrick McCabe’s 2006 novel, Winterwood, for example, complicates the notion of crisis masculinity in Ireland as a symptom of globalisation and postmodernity, instead considering the male subjects of the novel through the lens of psychic trauma, memory, language, temporality and history. The essay makes a compelling connection between the Lyotardian unpresentable and the uncanny, and reads the ‘broken narrative’ of the novel as an engagement with the traumatic uncovering of institutional abuse scandals over the last two decades. Miriam Haughton’s startling and arresting essay on Louise Lowe’s The Boys of Foley Street (2012) likewise offers a complex engagement with masculinity and crisis. Haughton forcefully asserts the ethical and affective dimension of Lowe’s radical and confrontational “postdramatic” theatre form in Anu Productions’ “Monto Cycle”, and argues strongly that such an interventionist approach forces the spectator/participant to engage with and receive the performances as testimony rather than as symbolic. Haughton’s reading of the performance of “troubled masculinity” in The Boys of Foley Street thus resists an easy and “safe” appropriation of the text as national allegory, while maintaining an emphasis on the local. She argues that the play’s presentation of the “lived experience of traumatised bodies situated in site-specific locales” (147) shifts the focus from a generalised ideological reflection to the understanding of “oneself as part of a wider community, and implicated within a culture that creates, sustains, and informs, troubled masculinities.” (155). Barry Monahan’s piece on RTÉ drama Pure Mule(2005-9) is also refreshing in its approach to neoliberal masculinity that avoids defaulting to the position that consumerism and globalisation equals emasculation and inauthenticity. His reading here of Tiger narratives complicates established dichotomies of interpretation. The use of the Western as a framework of analysis is particularly persuasive, and brings forth insightful commentary on masculinity, mobility and futurity.

Besides the particularly noteworthy essays mentioned above, there are also solidpieces on post-conflict masculinity (although Emilie Pine’s and Sarah Edge’s essays cover similar ground, both bring something fresh to the table – Pine’s reading of Steve McQueen’s Hunger as aesthetic decommissioning, and Edge’s interrogation of the commodification of the masculine victim in the “marketing” of the peace process, are particularly insightful), as well as good readings of contemporary urban masculinity (in Asava’s and Negra’s pieces, particularly, and in Cormac O’Brien’s essay on Celtic Tiger theatre). There is an intriguing, though ultimately not fully realised, presentation of an écriture masculine in the fiction of Sean O’Reilly in Fiona McCann’s essay, and in the best of the three essays on music, Sean Campbell’s focus on diasporic configurations of Irish masculinity in the band Oasis proves a productive angle of analysis.

As a whole, the collection, while it is a useful addition to this growing field of study, perhaps doesn’t fully grasp the opportunity to break new ground, and rather capably, though somewhat predictably, follows critical pathways already established, particularly by Singleton and Ging. With some exceptions, particularly in the three chapters discussed above, the collection’s approach to masculinity seems a little safe, and on occasion, a little incidental to the analysis (although the focus may always be on men, it doesn’t necessarily follow that masculinity is being examined). Nevertheless, Irish masculinity studies is an important field to cultivate, and all of the essays here are extremely welcome within the broader movement to interrogate and complicate modes of masculine subjectivity in Irish cultural ideology.