by Viviane Carvalho da Annunciação. This text may be archived and redistributed both in electronic form and in hard copy, provided that the author and journal are properly cited and no fee is charged for access. 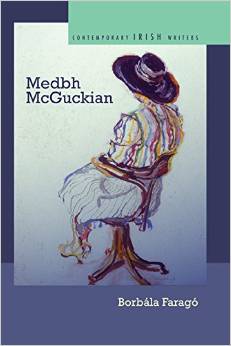 In the poem “On Ballycastle Beach”, Medbh McGuckian invites the readers to a moment of poetic discovery.  Simultaneously addressing an unresponsive interlocutor, she points to the deceitful nature of language, as the fourth line of the second stanza proposes: “words are traps / Through which you pick your way”. Additionally, the metaphor suggests that these traps are the symbolic path chosen by the reader in his or her interpretative process, given the fact that traps can also have the colloquial meaning of personal belongings. This is exactly the strategy used by Borbála Faragó in order to explain the intricate relations of Medbh McGuckian’s poetry. Instead of falling back on obvious feminist readings or obscurantist deconstructionist analyses, the critic investigates the creative performance of the poet in its complexity and totality. Even though the task is indeed challenging – due to the symbolic and polysemic nature of McGuckian’s oeuvre – the author could master it through a detailed attention to the poems and careful consideration of McGuckian’s thoughts about art and personal distresses.

In order to fulfill her objective of reading Medbh McGuckian’s poetry as “performative creativity” (10), Faragó chooses a chronological approach. Throughout five chapters, she examines issues such as feminism, political affiliations, death, spirituality, religious influences and poetic psyche. This multiplicity of themes gives the reader a clear account of the importance of McGuckian’s poetics. Moreover, the chronological interpretation allows the critic to draw parallels between the historical situation of Northern Ireland and the ideological discussions of the poems.

The first chapter is dedicated to the “formation of the creative self” (10) in McGuckian’s first four collections, The Flower Master (1982), Venus and the Rain (1984), On Ballycastle Beach (1988) and Marconi’s Cottage (1991). Stressing the importance of the National Poetry Competition prize and the problematic relationship between the poet and her first publishing press, Oxford University Press, Faragó explains how the poet started her career with the demanding task of expressing self in language. According to the critic, poems such as “The Singer” and “The Seed Picture” stress that McGuckian’s dynamics of writing tend to “failure in success” and “collapse in completion” (21). This failure is further developed in the volume Venus and the Rain (1984) which explores feminine worries, such as post-partum depression and the function of the female muse for a woman poet. Another important question that the critic raises is that of “an involuntary happening of poetic creation” – which is directly linked to the poet’s physical change on account of becoming a mother. An important poem for this period is “The Dream-Language of Fergus”, which represents, simultaneously, her own ars poetica, and the opening of her practice to the reader’s creative and active interpretation.

The second chapter of the volume is dedicated to the “politicized aesthetic” of the volumes Captain Lavender (1994), Shelmalier (1998), and Drawing Ballerinas (2001). Given that the 90s was a crucial decade for the resolution of the conflict in Northern Ireland, the poet’s work did not ignore the grievous situation of her own historical time. In search for a “quest of conscience and the formation of a creative self” (68), politics is addressed through “hidden allusions and metaphorical twists” (71). Poems such as “Script for an Unchanging Voice” and “Dream in a Train” exemplify McGuckian’s technique of seeing politics as a multilayered parchment. Quoting Slavoj Zizek’s understanding of Adorno, Faragó argues that Drawing Ballerinas represents an “enabling impossibility” (82) in which politics is transformed into an imaginative consciousness rather than a definite stance. In this way, in order to avoid propagandistic opinions, the poet creates a spiritual engagement with violence and death.

The third chapter examines the volumes The Face of the Earth (2002), Had I a Thousand Lives (2003) and The Book of Angel (2004) in which McGuckian incorporates religious discourse and iconography in order to expand the creative scope of her poetry. The critic identifies a subversion of biblical passages and a reversal of spiritual meanings as a depiction of the creative process, like a painful and harmful practice. The poem “Rain” and “The Gas Curtain” are instances of this method, since they describe her words as hazardous material that injure the linguistic soil. Another relevant poem is “Navicella”, which engages with the Renaissance fresco of the same name by the artist Giotto. Continually reflecting on the meaning of religious parables and symbols, the poet meditates on faith and how those images can lead to a “Virgin-Mary-like acceptance of” (104) Christianity.  Another icon that is appropriated by McGuckian is the angel, which proposes alternative ways of communication, especially prayer, for angels act as mediators between heaven and earth.  This is also a way for the poet to deal with the issue of identity in Northern Ireland.

The last chapter of the book examines McGuckian’s latest poetical volumes: My Love Has Fared Inland (2008), The Currach Requires No Harbours (2010) and The High Caul Cap (2012). Faragó asserts that they represent an introspective journey in which existence is seen as hurt bodies which do not render easy interpretations. The analysis of poems such as “The Nth of the Marchember” and “Kaluza’s Law” portrays the poet as a witness of death and decay. While the former shows McGuckian at her mother’s deathbed, the latter represents the speechlessness of the trauma caused by a disturbing loss. Summarizing the plurality of themes in McGuckian’s poetry, the last chapters reaffirm the centrality of “performative creativity” in her work.

Essential to any postgraduate student or literary critic that is engaged with Irish and Northern Irish poetry, Medbh McGuckian is a book that offers a thorough panorama of McGuckian’s oeuvre. By being faithful to the problems and difficulties posed by the poems themselves, the critic constantly reminds the readers of the subtle poetic subjectivity that is constructed by her work. Since the book does not focus on a specific theme, it is also a resourceful study for those who seek to pursue further research McGuckian’s poetry. However, the most significant accomplishment of the volume is to demonstrate that McGuckian is an essential poet not only for feminist or historical criticism, but for universal poetics.