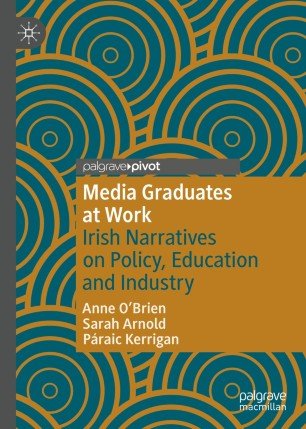 This short monograph is an essential read for all Irish 3rd level educators in the fields of film studies, media studies, communications, and new media. A tacit problem in film and media education in Ireland over the last thirty years has been a perceived disconnect between national policy, 3rd level media education, and a direct path to employment in film or media industries. Media Graduates at Work: Irish Narratives on Policy, Education and Industry, written by Anne O’Brien, Sarah Arnold and Páraic Kerrigan, is a timely and illuminating book which critically contemplates this problem for the first time in a major Irish academic study, building on recent work by O’Brien and Kerrigan themselves (2020) and complimenting recent work by John O’Hagan, Denis Murphy, and Ruth Barton (2020).

Published as part of a new series from Palgrave which analyses “creative working lives” in the creative and cultural sectors, Media Graduates at Work exposes difficult home truths regarding State policy in Ireland and its relationship with media education, the jobs market, and the neo-liberal skills-focused economy. The aims of the authors are to “systematically examine various factors that shape media work which include the State and its policies, industrial and organizational practices and cultures of media education” (1). The central thesis examines “the extent to which there is an interrelation between policies, industry norms and educational practice for the worker” (2) whilst noting the “tensions between educators and industry, the ambivalence that media graduates have about media education, and the sometimes poor alignment between each” (ibid). The book is structured across six short chapters, including a brief introduction and conclusion (which considers the already precarious nature of media employment in the light of the Covid-19 pandemic). The authors’ methodology is based on data acquired through interviews with graduates, employers, and educators, alongside a discourse analysis of Irish state policy. The text provides well researched explorations of four key issues: an analysis of policy; an outline of the perspectives of media educators; the viewpoints of employers, and finally an overview of the outlook of recently graduated students.

Chapter two analyses Irish State policy relating to the creative industries and examines the consequences of the “education for industry” discourse and the “human capital” narrative of skills development that has emerged in Irish education over the last twenty years.  This analysis is predicated by the central claim that “Irish audiovisual policy essentially disregards the reality of media work and fails to understand the function of the higher education sector” (10). The chapter analyses Irish audiovisual policy since the 1990s and the Culture 2025 framework as case studies and attempts to understand how they have shaped education, training and media work. The authors argue that at the level of policy creation a narrative of inadequacy has developed surrounding Irish audiovisual education and they note that this perception has caused misalignments in policy which display little concern for sustainable media employment or the promotion of what they describe as “good work”. In a damning verdict the authors state that “Irish audiovisual policy misrepresents the precarious nature of media work, fails to engage effectively with the higher education sector and simultaneously charges educators and workers with failing to meet the needs of industry” (8).

The authors highlight an influential 1995 finding by STATCOM (a statutory committee tasked with reporting on the audiovisual industry in Ireland) which stated that academically orientated education was of little value if it didn’t meet the needs of industry (14). This report failed to see non-market private and social benefits of a liberal academic education and it stated that “conceptual thinking about film and television had no relation to the practice of film and television” (ibid). This problem now overshadows wider media education in Ireland, but also contradicts the evidence of potential employers, as the authors note in later chapters. The consequences of the shift of focus in media education towards skills-based learning has meant that “policy […] focuses on industry and not on worker precarity and vulnerability”, or indeed a commitment to lifelong learning (25).

The book next turns the spotlight on those who work in media education. Chapter three assesses the value of media education and its relationship to industry from the perspective of educators. This took the form of 23 interviews with educators from across the Irish 3rd level sector, including Universities, Institutes of Technology, and Colleges of Further Education. The interviews show that many educators regard media education as fulfilling a broader role in the lives of students rather than simply as preparation for employment (although the authors do note considerable variation in response, from those who felt that media education should challenge social and political hierarchies to others who did regard employability as the goal). Educators felt that the development of critical thinking skills were as important as subject specific knowledge and this highlights the contested relationship between media education and media work; regarded by some as not academic enough and by others as not vocational enough. Some educators were frustrated with a lack of budget or infrastructure which would allow them to develop the goals of policy makers, and whilst some were happy for industry involvement, others were sceptical of the importance of industrial participation in education. It was also clear that there has been an erosion in the liberal education model of media studies, which is often not in the best interests of graduates, or indeed desirable for employers.

Some of the most interesting findings arise when the authors assess how media industries view graduates of media education. This research consists of 13 interviews with representatives of companies of varying size which were “selected for their salient position in creative industries, that is, broadcasting, film, digital production or communications more broadly” (57). It was found that employers did see media graduates as possessing “work-relevant” skills and many underscored a commitment to recruiting media graduates with a 2.1 degree (still regarded as a basic entry requirement for work in creative industries). Storytelling and research skills (beyond the capacity of a google search) were regarded as core competencies and two of the most important skills that industry saw as relevant in a media education. Also regarded as relevant were “analytical skills” and a “broad sociological perspective on digital practice and its histories” (the authors point to a possible deficit on the part of universities to similarly regard these critical and analytical elements as key skills). In addition, a broad suite of technical skills were highlighted to fit a range of media industries such as radio, television, film, PR, and digital production. Significantly, the authors found that employers did value the skills acquired by graduates, which was a finding at odds with audiovisual policy documents. Some findings were beyond the control of educators: employers highly valued “taking initiative” which they did not regard as something that could be taught in college. It was also found that university qualifications still meant starting at the bottom within industry, but it is noteworthy that employers regarded internships as a path to potential employment. Internships were valued as a means for students to acquire industry-based training. Of great importance is the finding that the optimum outcome for employers was a balancing of the liberal education model with skills based industrial knowledge.

The final chapter focuses on the experiences of 20 recent media graduates and their attempts to negotiate careers in media characterised by “precariousness and uncertainty, where graduate trajectories are highly contingent and continually negotiated” (77). One of the problems for Irish media graduates is that they enter into an industry in which educational attainment is not necessarily valued in creative work and where practical experience often shapes entry routes (81). Some key points emerged, for example the gap between education and the actual transition to media work, and the fact that some felt short-changed by their degrees. Students also had to adapt their expectations of media work and quickly realised that portfolio work would facilitate them in gaining professional experience, and that career pathways could be further enhanced by support from industry for further training initiatives.

If a criticism could be made of the study it is that very little information and detail regarding the interviews and the questions put to participants is provided to the reader. As such, the authors could be accused of the subjective interpretation of data rather than a reliance on completely objective findings. This is however a minor point. O’Brien, Arnold and Kerrigan’s book is an excellent analysis of one of the biggest “elephants in the room” for Irish media educators; the disconnect between media education and pathways to employment. Their study is of critical importance given that there are now over 200 media education programmes of varying levels in Ireland catering for only 7000 jobs (12).  The authors conclude by emphasising that there is a current “mismatch between the stated priorities of national policy, educators, employers and students” (103). The mismatch begins with Irish audiovisual policy, which provides 3rd level institutions with conflicting recommendations of skills shortages without any clear articulation of what skills are required, or for which roles. The book actually underlines the importance of industry-based skills, but a key takeaway for both educators and policy makers is the essential role that critical thinking and research skills play in media employment. The aforementioned disconnect between policy, education and employment is reflected in the paradoxical situation highlighted by research in this book wherein employers valued the very skills that graduates and policy makers did not consider valuable. These are not unsolvable problems, and the authors note that a more coherent synthesis between education, policy and industry could be reached if all the actors involved were allowed to communicate to a greater extent (107). Media Graduates at Work: Irish Narratives on Policy, Education and Industry is a measured, informed and contemporarily relevant book which should be regarded as a future starting point in any continued engagement between academia, policy creation, and media industries.