by Maria O’Brien. This text may be archived and redistributed both in electronic form and in hard copy, provided that the author and journal are properly cited and no fee is charged for access. 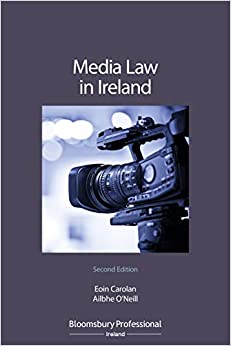 The legal concepts pertaining to the production, distribution and consumption of media are of significance given the important role of the media in a democratic society. Recently, public debates on such issues as blasphemy, the funding of public service media, and regulation of political advertising illustrate the significance of these media law issues to wider society. This is a fast-developing and ever-changing area of law, and thus the second edition of this book is welcome. Neither law nor the media operate in a political or social vacuum but draw on issues ranging from constitutional law, politics, and the philosophy of the nature and operation of a democracy.

The second edition of Media Law in Ireland by Eoin Carolan and Ailbhe O’Neill is a practically focused text aimed at legal practitioners, students, and academics. Primarily, it explicitly and deliberately focuses on what is traditionally known as the Fourth Estate; that is, the more traditional forms of broadcast and journalistic media. The pragmatic decision not to extensively cover law as it applies to new media is, according to Carolan and O’Neill, justified by the speed of developments in this area.

The authors emphasise the balancing act between the protection of free speech, the freedom of the press, and the role of the state towards the operation of the media. Media Law in Ireland approaches the subject matter in a comprehensive fashion, offering an in-depth, insightful analysis of the legal issues pertaining to media law from an Irish and EU perspective (and international where relevant). Significantly, it combines this analysis with an overarching conceptualisation of the fundamental theoretical concepts shaping our understanding of media law. This is illustrated by the thematic nature of the book, which, usefully insists on foregrounding the significance of media to democracy and society.

The authors’ insightful approach to the wider social and political significance of the legal issues relating to media is illustrated by the framing of the law in this area around the fundamental issues of theories of freedom of expression as covered in Chapters 1 and 2. The provision of this theoretical lens through which legal issues around media are explored underpins the subsequent chapters. Further into the book, the framing of the intersection of media and politics in Chapter 4 and the media and courts in Chapter 5 illustrate the holistic nature of this approach. These chapters provide a foundation beyond normative legal concepts to interrogate the development of defamation law, privacy and regulation of the press and broadcasting, covered in Chapters 6, 7, 8 and 9 respectively. Throughout, the development of legal jurisprudence from an Irish, UK and European perspective is placed in a well-illustrated, wider social and political context.

The legal requirements governing political advertising offers a contemporary illustration of the present-day relevance of media law issues. For example, the (problematic) announcement by Twitter on 20 October 2019 that they will not accept political advertising[1] raises questions around the legislation in Ireland banning political advertising on broadcasting (a ban that does not extend to print or internet). The ban, contained in s 41(3) of the Broadcasting Act 2009, provides that “a broadcaster shall not broadcast an advertisement which is directed towards a political end”.   As Carolan and O’Neill state, apropos of the disquiet in Ireland over the use of social media as a campaigning tool during the referendum to remove the 8th Amendment (i.e., relating to the constitutional ban on abortion) from the Irish Constitution, “whether such self-regulatory measures are appropriate or sufficient” is “questionable in an era in which news and current affairs consumption is increasingly realised through social media and other online sources” (147). The exploration of the significance of the decisions of the European Court of Human Rights (ECHR) under Article 10 of the European Convention on Human Rights (ECtHR) (such as Tierfabriken I and II and TV Vest)[2] illustrates both the breadth of knowledge of the authors of Irish and EU law but also the international nature of legal developments in this area and the political significance of such decisions.

As indicated above, the authors explicitly state that they do not cover legal issues around new media forms, holding that while the “ever-shifting nature of the media environment” (preface v) means that the range of potential legal issues expands to include a multitude of other areas, their focus is upon the law as it impacts on media in the more traditional sense. Nevertheless, the authors correctly eschew technological determinism in their application of the law to newer forms of media where appropriate. For example, Chapter 6 on the law pertaining to defamation refers to online issues where appropriate throughout the chapter, while also addressing the distinct characteristics of defamation online.   It is not a criticism of this book to express a hope that the authors will, in future editions, expressly apply their insightful approach to media law to new forms of media. Rather, it is an acknowledgement of their extensive knowledge and comprehensive understanding of the complexity of the multiple legal and regulatory issues arising out of engagement with forms of media from the perspective of the creator and consumer.

Media Law in Ireland at times echoes the emerging approach in legal scholarship of law and political economy (LPE), given its recognition of the relevance of power structures (most particularly in concepts of broadcasting regulation and media ownership). LPE “focuses on how relations of power are legally and politically configured and reconfigured over time and in distinct periods, and how in turn this conditions the development of the economy” (Wilkinson and Lokdam 2). The coverage of media ownership in Chapter 10, which references the Media Pluralism Monitor 2017 carried out by Roddy Flynn is a particularly interesting example of the potential intersection of law and political economy as it pertains to the discourse around forms of media.

This book is a welcome addition to the field of media law books, complementing Cox and McCullough’s Defamation: Law and Practice from 2014, and the recently published UK-focused Media & Entertainment Law by Ursula Smartt (4th edition, 2020) for example. This is an invaluable resource for practitioners and academics, but should also be referenced by those with interest in political economy of communications or media industries regulation. While the text is aimed at legal practitioners and law students, it is also an example of the potential richness of interdisciplinary approach between law and political economy.

The regulatory and political decisions which shape law-making towards the media are not made in an economic or social vacuum but are part of wider society. Analysis of our media needs grounding in legislative and regulatory concepts to further understanding of the wider context within which all forms of media are produced, disseminated and consumed. The insightful analysis of media law issues contained in Media Law in Ireland reflects the importance of mediated forms of communication to our daily lives.