by Gavin Titley. This text may be archived and redistributed both in electronic form and in hard copy, provided that the author and journal are properly cited and no fee is charged for access. 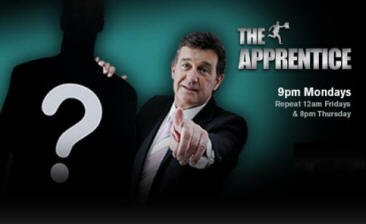 Produced by Screentime ShinAwiL for TV3 under licence and guidance from Mark Burnett Production in Los Angeles.

The Apprentice unfolded as the nation’s political economy unraveled. Shot between July and September 2008 and broadcast as the anchor of TV3’s autumn schedule, what was then termed ‘the coming recession’ seeped slowly into the steep learning curve of the 14 proto-apprentices. The contrast between their furious multi-tasking and the economic meltdown of the autumnal viewing context could, at a push, be described as dialectical. Contestants striving to embody the flexibility of the new capitalism were frequently book-ended by news of the ur-flexibility of capital itself, bidding ‘adios’. As programme participants trumpeted the adaptability of their ‘skillsets’, retreating CEOs and politicians soothed the newly redundant of Ireland’s regions with assurances that their skillsets were just great; ‘it’s not you, it’s so us’. As desperate final stage contestants pleaded, skillsets numbed, that they would walk through walls for the Master, a desperate government exhorted the nation’s workers to take a little pain — then a little more  — for team Ireland. It is always so much more interesting when television captures the zeitgeist so unwittingly.

When TV3’s Director of Programming, Bill Frow, flagged The Apprentice as one of a new series of programmes ‘hold(ing) a mirror up to contemporary Ireland’ (Healy 2008) this is probably not what we were expected to see in the reflection. The Irish version of the show was seen as a significant domestication of a format which, in its previously syndicated British and American guises, had proved highly popular with Irish audiences. In focusing on the workplace, it consolidated the continuing fascination of Irish reality television formats with the performance of self in pressurized and team/task driven work contexts. The Apprentice is also one of the pivotal programmes deployed to develop TV3’s emerging multimedia and cross-media strategies, from the provision of additional online content to the use of an off-shoot series  —  The Apprentice: You’re Fired!  —  to launch TV3’s surrogate channel 3e (Channel 6 made over as E4). Licensed to Irish production company Screentime ShinAwil by Mark Burnett Productions, the latter are now reported to be keen to potentially ‘bundle’ the Irish Apprentice with other versions for sale in the southern hemisphere (Sweeny 2009).

As a reality television format, The Apprentice follows the usual procedures of hybridizing generic possibilities, blending a competitive gameshow format with docu-soap intimacies. In its travels, this generic cocktail has been combined with more culturally embedded aspects, from the BBC’s branding of their version as a public service contribution to ‘economic education’, to Donald Trump’s Jerry Springer-like sermons on the morals of accumulation in NBC’s original version. So how has it been rendered Irish? The key act of localization is the persona of the Master, and the Irish role was filled by Bill Cullen, a media-friendly entrepreneur and self-mythologised, self-made man with a lucrative sideline in motivational speaking and coaching (‘be a Happy, Healthy Achiever’, www.goldenapples.ie). Cullen’s casting was astute, as his persona follows in the tradition of Irish television personalities so well captured by Kuhling and Keohane as figures that combine the ‘ideal of fully actualized individualism in modern society’ with being “‘household names’, embodiments of the idea of community” (2004: 80).

In common with other Masters, Cullen is designed to embody a recognizable myth of national capitalism. Donald Trump, in the NBC series which commenced in 2004, set himself squarely in the tradition of the grand family oligarchies of US industry, actively encouraging his first apprentice, Bill Rancic, to see himself as the creator of cross-generational wealth. Alan Sugar, as Jim McGuigan points out in his discussion of ‘cool capitalism’ in the UK Apprentice, “ is instantly recognizable in Britain as the very type of an East-End barrow boy made good” (2008: 315) and this self-made authenticity is shared and amplified by Cullen. These biographical reference points hover in Master/apprentice encounters as ambivalent touchstones of real experience, implicit counterweights to the participants’ shakier mediations of self, formally reliant as they are on the contingent vocabularies of self-realisation common to reality television and the fluidities of the ‘new capitalism’.

The pleasures of Sugar/Trump involves their unambiguous policing of the bottom line, their insistence on what Alain Badiou calls ‘an ontology of profit’. Yet to understand Cullen, attention must also be paid to versions where this ontology is partially obscured by the affinities between the performative imperatives of reality television and the self-actualising scripts of the ‘new economy’. In the Finnish version Diili, for example, the management consultant Jari Sarasvuo dissolved Sugar/Trump autocracy in the postmodern pretence of the corporation that wants to be your friend, symbolized by his refusal to fire people, preferring to release or free them. Bill Cullen’s persona is an almost perfect synthesis of these generational fractions, as his captain of industry bravura is fused with a fondness for the possibilities of late capitalism’s cannibalization of forms of cultural legitimation. He shares with Sarasvuo a penchant for vocabularies hewn from books arranged in steps, and for candidates who not only make money, but who do so in ways that allow a window on their warrior soul.

Their search for the soul or spirit of the contestants is a substratum of a wider search, expressed in the cultural forms of reality television and immanent in what Richard Sennett has termed the ‘culture of the new capitalism’. Writing in 2006 in the book of the same name, and reflecting on reactions to his previous study of subjectivity, labour and capitalism The Corrosion of Character (1998), Sennett rightly criticises commentators who saw his ethnographic accounts of disoriented workers in their flexibilised environments as cautionary tales of American excess. The forms of rationalisation and reorganisation described were not only global, he argued, but had come to occupy a position of symbolic value in the wider economy and beyond, exerting ‘… a profound moral and normative force’ (2006: 10). Sennett’s respondents make common cause with Zygmunt Bauman’s imagined ‘individuals’, forced to try and find ways of responding biographically to institutional and political-economic disjunctures, or even required, in conditions of instability, to frequently improvise, re-fit, or ‘… do without any sustained sense of self.’ For Sennett, societies are searching for a normative flexible subject, a new type that can embody what he critiques as a profoundly damaging ‘cultural ideal’ (2006: 5).

Reality television is not quite an orchestrated search for this ideal, but it is possible to read the fusion of competition, surveillance, life experiment and heightened reflexivity as a cultural form intimately shaped by the ambivalences of liquid life. The Apprentice sits easily in this flux as it features contestants presented as searching not so much for a job as for a vocation, a new stage of existence, one where the membrane between life and work has given way to a portfolio of projects, one of which is the self. The competition is organized around weekly projects tackled by teams, teams which were initially organized into ‘lads and ladies’ on the prevalent reality television assumption that gender, race or class must be formally shoehorned to assure immediate conflict. With the exception of the first task  —  selling fruit on Dublin’s Moore Street as a living footnote to Cullen’s autobiography Penny Apples  —  the tasks are extended product-placements, with the proto-apprentices briefly indentured to clients who have paid for the commercial exposure. Nevertheless this client portfolio manages to reference some of the prime conceits of the Celtic Tiger; designing a ‘personal loan card’ for Blue Cube Loans, producing a commercial for the exclusive Elysian residential development in Cork, upping sales of duty free in Dublin airport, and in the grand finale, organizing tax-deductible philanthropy at a Charity Gala Dinner.

The vast majority of the fourteen candidates  —  with the important exception of the eventual winner  —  were drawn from similar backgrounds in commercial sales, and their regional backgrounds were not parlayed into the kind of simulation of GAA fandom so prevalent in RTÉ’s competition-based formats. Instead, the candidates who manage to carve out a presence as ‘characters’ beyond the rituals of being natural bornwinners that don’t take crap from anybody were those that realized, in effect, that they were involved in a double mediation; their warrior business self, and the warrior business self folded into fashioning their distinctive ‘backstage’ self over the course of the series’ narrative. Meet Stuart, who set out to translate his ‘lack of formal qualifications’ into a form of biographical destiny  —  he will be the new Bill. And Joanna, an early ‘front-runner’ and favourite of the tabloid media coverage who cheated by phoning a friend in the task for week 7, and so became the node around which discussions of ethics could be wired.

The discussion of Joanna’s sin illustrates how the revelatory narratives of reality formats and the self-fashioning imperatives of the mediated, flexible self not only interconnect, but must also diverge. Commenting in an early extract from The Apprentice: You’re Fired, Cullen and his partner and fellow judge Jackie Lavin conclude that Joanna wanted it too much. Not a happy healthy achiever then, but when is too much, too much? Stuart, similarly, in the semi-finals, found his ‘lack of formal qualifications’ read bluntly as a liability by a special panel of business consultants, and blinked back the tears as the possibilities of what Sennett calls the history-less individual were over-ridden by reality television’s exhaustive capacity for surveillance. Wanting it too much, or too little, education doesn’t count, and then it does; the point is not inconsistency but that the criteria are situational, derived from the ways in which the contestants unfold themselves and are unfolded as characters, as models of conduct, as object lessons on ‘values’.

In the end the series was won by Brenda, a bridal shop owner, and her status as a successful small business owner now ready to ‘take a step up’ is the appropriate translation of the Master’s geist. With just enough history and embedded in her ‘community’, yet ready to move to Dublin and fully actualize as an individual for Bill, she emerged just in time for The Apprentice to issue a reassuringly local rebuke to the wayward global capitalism that has rocked its world (symbolized by the aerial views of Dublin’s financial services sector). You couldn’t script it; all soundness and local know-how, the good woman from the West sweeps into Dublin to authenticate our Apprentice, a particularistic triumph over the empty globalism of the format. Unless of course one is inclined to see the empty globalism as precisely the particularity of the Irish Apprentice; there are few things more redolent of the immediate past than one of the key elements of the final task; recruiting Irish celebrities  —  including a former Big Brother contestant and a ‘glamour model’ step up to the plate  —  to sell mobile phones in big, empty shopping centres.

If there is a consistent attempt to self-consciously ‘theme up’ the Irishness of the series, it is in the lacquering of our essential decency on the unavoidable brutality of the bottom line. Bill tells it like it is, but those weak in warrior spirit lack ‘liathróidí’ rather than ‘balls’, the Irish word soulfully mediating a Sugar/Trump article of faith (you must have balls). Much is made in the retrospectives of how team-mates grilled in the board room were reluctant to criticize or damn each other  —  fair play to the ‘sound lads’ and ‘girls with mega-liathróidí’  —  yet as McGuigan perceptively argues, The Apprentice simulates “… a turnstile world of work, (where) the mask of cooperativeness are among the only possessions workers will carry with them from task to task, firm to firm, these windows of social skill whose ‘hypertext’ is a winning smile” (2008: 112). Perhaps that’s the reflection in the mirror; this condensed commonplace of recited Irishness being mobilized to theme away the humiliations and insecurities of the new capitalism.