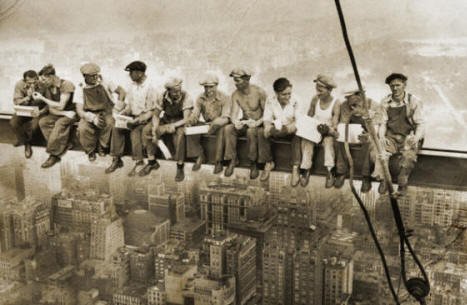 Men at Lunch is the story of one of the better-known photographs of the 20th century. Usually attributed to the photographer Charles Ebbets, the image depicts eleven steelworkers taking a lunch break astride a steel girder 800 feet above the streets of midtown Manhattan, oblivious to the perilous drop below. The ubiquity of this 1932 group portrait has made it a focal point in the creation myth of the American nation. To many, it depicts the casual heroism of the “huddled masses”, encapsulating, as one of the film’s contributors puts it, “the moment where America ceased to be the America of the Mayflower and became instead the America of Ellis Island”.

Given the iconic status of the subject photograph, one of the most extraordinary things about director Seán Ó Cualáin’s engaging yarn is that the film had not been made before. For apart from the intrinsic interest of the image itself, a number of enduring questions suggest that here is a story ripe for the telling. Is the photograph real or was it faked? Who took the picture? And who are the men on the beam?

The solving of these mysteries provides Men at Lunch with much of its narrative energy. The filmmakers travel to the vast underground warehouse where the original glass plate negative is housed in a high-tech, climate-controlled environment reminiscent of a James Bond film. We learn that the photograph is one of the best-selling pictures in the Corbis archive. The company archivist provides reasonably compelling evidence that the glass plate negative is indeed an original (although he fails to address the more common contention that the image was staged, or is at best a forced-perspective optical illusion).We are told that the beam on which the men are perched is part of 30 Rockefeller Plaza. We travel to that building’s in-house photographic archive and discover a number of contemporary images that cast doubt on the claim that Ebbets was the photographer.1


In relation to the third question —  the identities of the men on the beam  —   the story remains murky. Such is the iconic power of the image that it has become something of an American cliché to claim descent from one of these steelworkers. The filmmakers go to some lengths to establish this fact, but then — seemingly unaware of the irony — advance a decidedly dubious theory that two of the men are emigrants from the tiny Galway village of Shanaglish.

Seán Ó Cualáin has stated that the film derives from a chance encounter with the photograph in a Galway pub (Ó Cualáin 2012). Given this starting point, it is hardly surprising that his film builds towards an examination of this theory, which is based on the claims of two elderly Irish Americans. While there is little doubt about the personal conviction of these Shanaglish descendants, they present precious little evidence for their case. Indeed the connection between Shanaglish and these Manhattan steelworkers seems to be based on a highly debatable physical resemblance and little else but an intuitive hunch. “You don’t grow up to the age I am now without knowing who you are and who your father is”, claims one of the would-be descendants, and who are we to argue? For we do not know either, nor could we from the evidence presented.

A more likely motivation for the Irish-American connection might be found in the requirements of the funding bodies that contributed Men at Lunch’s production budget. The film, commissioned by TG4, received a €50,000 Irish Film Board production loan (IFB 2011) and €80,000 from the Broadcasting Authority of Ireland’s Sound & Vision Fund (BAI 2010). The stated intentions of both of these funding bodies reflect the prioritisation of film and television project that fulfil certain general cultural objectives. In the case of the Film Board, projects must “tell Irish stories, drawing on and depicting Ireland’s culture, history, way of life, view of the world and of itself” (IFB 2013a).  In a similar vein, the Sound & Vision fund targets new television programming on “Irish culture, heritage and experience”, including history, the Irish language, and “the Irish experience in European and international contexts” (BAI 2010: 3). It is difficult to see how the filmmakers could have fulfilled these eligibility requirements without embracing this Irish “angle” (tenuous though it may be) to the story of the famous photograph.

Within the limitations imposed by this cultural requirement, it is to Ó Cualáin’s credit that he has made a film of international appeal, as is obvious from the film’s reception on the festival circuit, where at the time of writing it is still doing the rounds. Indeed the production company, Sónta Films, found the resources to produce separate Irish- and English-language versions, fulfilling the requirements of its (Irish language) host broadcaster yet making the film more festival friendly, especially in the Anglophone markets where, given its subject matter, it might be expected to have the most impact. Following its Irish premiere at the 2012 Galway Film Fleadh, the film was warmly reviewed at the Toronto International Film Festival and DOC NYC. Its appeal to the American audience appears to be ongoing, with a sale to the US public service broadcast network PBS possibly in the works.2

There is little doubt that the international appeal of Men at Lunch is bolstered by the film’s refusal to limit itself to the smaller story of its mooted Irish angle. The photo’s history allows Ó Cualáin to weave in an appealing, if romanticised, tapestry of contextual narratives. There is the American immigration story, where the fusion of disparate immigrant experience contributed to the extraordinary explosion of American popular culture. There is the tale of the heroic labour, ingenious design and technological innovation that produced the skyscraper − “a city of industry soaring up to the sky, a monument to human endeavour”, in the words of Fionnuala O’Flanagan’s voiceover, eloquently written and sensuously delivered (in both language versions). And there is the story of the Depression-era American steelworker, for whom the cruel statistic of “one dead worker for every ten floors” underscores the human suffering that lay beneath the upward trajectory of the celebrated skyline.

A dependence on talking heads is a feature of this kind of film, and their inclusion rather undermines the film’s otherwise unexpectedly cinematic qualities. Nevertheless Men at Lunch was praised by Variety for its “impressive” production values (Leydon 2012), no mean feat for a television documentary emanating from the typically low-budget environs of TG4. The film is notable for its extensive use of striking, carefully chosen period photography and archive footage. The most notable visual element, however, is a rostrum effect in which the iconic photograph is animated in the “virtual 3D” style pioneered in the 2002 US documentary The Kid Stays in the Picture. The effect is well executed, and it is clear that its intention is to add a fresh perspective to a familiar image. But it still feels overused, detracting from its other intended purpose, to avoid an overdependence on the original version of the image.

This is a pity, because otherwise Ó Cualáin and his Director of Photography Réamonn MacDonncha have taken commendable pains to avoid the pitfalls of filming in what Ó Cualáin (2012) knows to be “the most photographed location on earth”. The production teamspent an extended period in New York researching and then shooting Men at Lunch, and the resultant familiarity is evident from the way they have filmed the city. Thankfully, there is little footage of Times Square (it is there, but so perfectly contextualised that its visual excess fades into insignificance). One of MacDonncha’s most inspired decisions is to film the city from the Roosevelt Island Tramway, avoiding the perhaps more tempting (and more expensive) use of helicopters and cranes. This resourceful vantage point  —   a relatively little-known location providing unusual city views from an elevated position  —   is one of which the “mad photographers” who braved the heights of 30 Rockefeller Plaza would undoubtedly have approved.