by Regina M. Ponciano. This text may be archived and redistributed both in electronic form and in hard copy, provided that the author and journal are properly cited and no fee is charged for access. 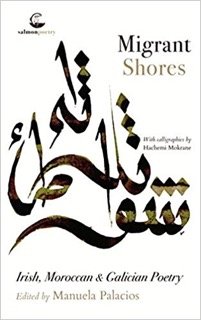 
The editor of Migrant Shores: Irish, Moroccan & Galician Poetry, Manuela Palacios, is no foreigner in the world of anthologies, translation, or the poetic borderlands of these three Atlantic communities. After To the Winds our Sails: Irish Writers Translate Galician Poetry (2010; co-edited with Mary O’Donnell), Forked Tongues: Galician, Basque and Catalan Women’s Poetry in Translations by Irish Writers (2012), Six Galician Poets (2016; translated by Keith Payne), and Los Ritos de los Sentidos (2016; co-edited with Jaouad Elouafi, Bahi Takkouche, and Arturo Casas), amongst others, the present volume is Palacios’ latest anthology that seeks to redress the literary canons that have marginalized Galician, Irish, and Moroccan poets in general, and women poets in particular. In line with this trajectory, Migrant Shores provides us with a textual space which carefully cultivates a rich intercultural dialogue between these communities of multiple belongings to unearth novel connections between gender and mobility.

The anthology –bilingual in format but with poetry in three languages – comprises an introduction by the editor and two main sections, “Morocco & Ireland” and “Galicia & Ireland”, all preceded by a tailored calligraphic design by the Algerian plastic artist Hochemi Mokrane. Each section includes seven contributions by Moroccan and Galician writers, respectively, and are followed by their translations into English together with a response poem at the hands of fourteen Irish poets. Palacios’ coupling of Mohammed Bennis & Paula Meehan, Eva Veiga & Maurice Harmon, or Gonzalo Hermo & Keith Payne, to name a few, adumbrates the collection’s aim to provide a holistic forum where both male and female poets from diverse generations and holding different positions within their respective social hierarchies and literary traditions come together to elaborate a pluralistic conversation. The high degree of original content together with the noticeably close collaboration among the creative writers resonates in the thematic cohesiveness of the volume as well as in the high literary quality of the translations.

The Moroccan contingent displays a wide array of voices, colors, and textures, united nonetheless in their penchant for evocative landscapes and conflicted lyric subjects. Starting on strong footing, the volume opens with “Laka al-turuq al ‘adīda [The Lessons of Exile]” (2000) by Mohammed Bennis,1 a prominent voice of contemporary Arabic poetry, mediated and countered by the equally salient Irish poet Paula Meehan. Bennis delicately handles spatial tropes to explore the life lessons taught by exile, a theme that reverberates throughout the collection. Meehan’s response, “By the Autumn River”, thinks back through Bennis’ motives to echo his view on painful instructiveness inherent to any journey into exile, yet significantly closes by suggesting its potential for “unlearning” – for deconstructing our notions of selfhood.

The following poems illustrate the processes of learning and unlearning during childhood, and their concomitant affective exile. Taha Adnan, himself a member of the Moroccan diaspora, distressingly conveys in “al-Māruksīluāz [The Maroxelloise]” (2009) the self-censorship of its heroine, a Moroccan girl from a traditional family growing up in multicultural Brussels. The pulsating verses relay the struggles of Adnan’s “tongue twisted” hybrid to reconcile private desire and familial expectations, and culminates in painful encounters with the realities of the female body. In her response poem, Máighréad Medbh, too, portrays the social alienation of a dissident daughter. “All About Her” speaks of the expulsion and return of the lyric voice’s anorexic sister from the very home in which she was punished for not conforming to her father’s expectations of proper female conduct.

Fatima Zahra Bennis’ “Naham [Longing]” (2008) and Susan Connolly’s “Anxiety”, provide another two private yet opposing insights into the relationship between female desire and women’s restricted self-determination. Bennis’ verses express the longing for the right to desire without remorse in rebellious tones and through natural imagery. Connolly formally mirrors Bennis’ two stanzas, but finds the equation of nature and woman oppressive.

Veering the anthology from intimate to political, Imane El Khattabi’s “Fīl-harb [In the War]” and Hugh O’Donnell’s “It Ain’t Over” both allude to the current refugee crises. El Khattabi’s poignant stanzas convey the devastating effects of the war through the continuum between material and emotional damages of a female refugee on her voyage to “a place untouched/by fire”. Hugh O’Donnell resumes her life-story once established on the other side of the frontier. Read together, then, El Khattabi and O’Donnell’s verses powerfully channel the chronicity of migration.

Memory and fantasy play complementary roles in the migrant’s mental landscape. Mohamed Ahmed Bennis’ “Khayāl bilā tarīq [Imagination without a Path]” (2012) addresses the migrant’s disorientation when the memory of home wanes and technology proves a frustratingly inadequate means to quiet the migrant’s sense of dislocation, leaving the imagination as sole source of comfort. Catherine Phil MacCarthy provides a prose reading of Bennis’ poem as well as a response poem, “O Halloran’s Fort”, in which the poetic voice constructs an imaginary house “built with our own wit” in which to take shelter from real-life invasions.

In contrast, Aicha Bassry exposes how the migrant’s imagination works both ways. Bassry’s female persona in “Al-sābiha fīl- ‘atash [Woman Swimming in Thirst]” (2014) is seated at a hotel room window overlooking the very boat that will take her away from her home country. If one reads the first stanza as expectant in tone, the second makes clear the woman’s reservations towards the country of destination as she visualizes herself “on the opposite seashore, […] a woman withering/ In a dark corner of life”. Sarah Clancy responds in one of the most explicitly dialogic poems of this anthology, “Poem for a Migrant Poet Waiting to Make Her Crossing”, with a lament of her own poetry’s and her society’s insufficiency to ease the migrant’s ordeal, and a bid to poetic voices such as Bassry’s: “please come poet with your poems and your art/come with your hope in the future/we have never needed you so much”.

The curative potential of poetic exchanges between migrant and local communities is restated as the Moroccan section reaches an end in Mezouar El Idrissi’s “Layl ġarnāṭa al-’ān [Tonight in Granada]” and Thomas McCarthy’s “Reading ‘Noche de Granada’ of Mezouar El Idrissi”. El Idrissi and McCarthy depart from the rest of the collection’s predilection for borders to celebrate the cultural and literary bridges between “North and South”.

The section “Galicia & Ireland” broadens the anthology’s horizons with two beguiling pieces about female transatlantic migrants by Cork-based poets Martin Veiga and Eiléan Ní Chuillenáin. Veiga’s “Unha Casa na Habana [A House in Havana]” delves into a woman’s vibrant reminiscences of her childhood home in the Cuban capital where she “nacín/por primeira vez ao mundo [was born the first time into the world]” to Galician migrants, and the distressing voyage towards her parents’ home country. Entwining sensorial and oneiric imagery into her recollections, Veiga brilliantly captures the migrant’s lasting affective attachment to a place from which she was so involuntarily detached. Ní Chuillenáin recovers her poem “She Was at the Haymaking” (2016) depicting a young Irishwoman’s departure to a novitiate in America through layered images of restriction and release.

Chus Pato and Lorna Shaughnessy set out on another radical shift in terms of perspective by conveying the experience of migration from the point view of those left behind. Pato’s “Asun” (2010) recurs to unconventional cadence and line breaking to skillfully convey the tension between migrants’ projection of success in the form of photographs and the ensuing sense of estrangement with their “voz totalmente inadecuada [voice that is completely out of place]” when the real conditions of the migrant are phoned home. In “Liberty Landing”, Shaughnessy’s lyric voice muses about the real and imagined photographs of a young Irish girl’s wanderings in New York on her day off in contrast with her absence from the family albums.

Echoing Fatima Zahra Bennis’ handling of female desire, subject matter and language in Eva Veiga’s “sentir o corpo [to sense the body]” elude fixation in favour of free associations that fluctuate from the carnal to the spiritual, and back again, thereon scrutinizing one’s conflicted relationship with the “brutal ocupación [brutish possession]” of the body. Maurice Harmon’s response poem, “Fluttering Handkerchiefs” (2016), however, focusses on the recurrent concern in this collection with the lack of historical memory in the West. Harmon’s last stanza, in particular, denounces the collective ostracism of refugees by the Irish, whose society is very much rooted in exile.

Baldo Ramos’ “amada estranxeira [foreign beloved]” draws a picture of the frustrated attempts of a Galician family to settle down in post-Great Depression America. Ramos makes effective use of the image of the tree that is continuously uprooted and pruned as the family moves throughout the oxymoronic migrant space, “[o] noso definitivo/baleiro [our final void]”. Evoking William Shakespeare’s The Tempest, Celia de Fréine’s “Doth Suffer a Sea-Change” urges for a more empathetic encounter with the refugees that currently wash up on our shores. As Pato and Harmon, amongst others, de Fréine finds blame with the “false promises” that have fatally attracted migrants in the past and do still.

Gonzalo Hermo’s self-reflexive “A estranxeira inventa a utopía [The outsider invents utopia]” (2011) is presented as an “acto de vinganza [act of vengeance]” against the poet’s persisting recursion towards idealized, heteronormative muses. Hermo’s “verso violento [violent lines] reject the “‘árvore esquelética’ [‘skeleton tree’]” and impositions that have conditioned, and castrated, the voices of the belligerent. Keith Payne renders Hermo’s dialectics with remarkable vigor, yet his own contribution is exquisitely delicate. Paying homage to Manuel Rivas while also echoing Hermo’s concerns, “The Outsider Watches the Woods from Her Room” depicts yet another female foreigner’s perpetual liminality and silencing.

Marilar Aleixandre sets out to relocate her female personae to a lunar utopia in “auga na Lúa [moonwater]” (2016), where they are no longer forced to participate in or likened to the exploitation of the earth but in an empowering communion with nature. “The Path We Make with Our Feet Follows Us Everywhere”, by Breda Wall Bryan moves through non-descript terrains as she depicts wrenching impressions of a migrant’s flight plagued by loss, torture, and despair along every step of the way.

Migrant Shores closes as strongly as it opened with the already acquainted María do Cebreiro and Mary O’Donnell, whom fittingly offer similar accounts of two women’s perambulations in red-light districts. In “O Barrio das Chinesas [The ‘Cosmopolitan’ Quarter]” (2005), very deftly reworded by O’Donnell, do Cebreiro expresses a woman’s curiosity towards, admiration of, and identification with streetwalkers and cross-dressers. Multiple encounters with these harsh realities in this quarter prompt, however, a vision of emancipation: “Pero en toda prisión/hai unha reixa, e en toda reixa hai fendas [Yet in each prison/there are bars,/and between them are gaps]”. O’Donnell’s “Remembering Amsterdam” transports us to one of the most emblematic districts of sexual exploitation, where the lyric voice feels ashamed by her participation in the fetishizing of her fellow women. Recognizing culpability, as this poem evinces, is nonetheless also the first step towards solidarity.

The depth and breadth of Migrant Shores arises from a thoughtfully calibrated coordination of twenty-eight highly representative writers from Morocco, Galicia, and Ireland that endorses revisionist discourses on age-old questions such as conflict between selfhood and nationhood, body and state, poet and politics. The anthology fulfils its aim to make a substantial contribution towards (re)covering female voices and experiences as migrant bodies, but also towards broader, emergent discussions about (non-)belonging that have recently become so poignant in the context of resurgent xenophobia and the reinstatement of borders. As a whole, then, Migrant Shores constitutes an extremely rich network of poetic exchanges that is equally appealing to the general reader as well as to academic scholars in fields ranging from translation studies, comparative literature, trauma studies, or ecocriticism, amongst others.