by Jane Ruffino. This text may be archived and redistributed both in electronic form and in hard copy, provided that the author and journal are properly cited and no fee is charged for access. 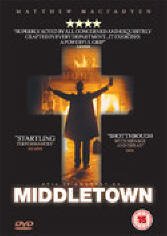 Ireland produces so few feature films that when the rare opportunity comes to say something over the course of two hours, directors and writers frequently try to say too much and end up showing the same repressed Ireland; conveying an overarching sense of isolation and entrapment that is old news to most viewers. Despite the presence of a talented cast, Middletown is no exception. Rather than being the barbed comment on fundamentalism set in a blackly comic landscape he seems to have intended,  director Brian  Kirk’s  attempt to satirise the bleakness of 1960s Ireland is just yet another foggy, formless Irish film. Kirk places his story in a hyperbolic state of relentless misery, a small town that could be anyplace, anytime, and while it would be wrong to suggest that the grimness was gratuitous, that the payoff –if there was to be one– is not apparent makes it difficult to wonder why anyone should bother watching it.

The story opens with ‘good son’, Gabriel Hunter being told by his father (Gerald McSorley) that he has been chosen to inherit the role of church minister, while ‘not-so-good son’ Jim waits outside the church, getting into fights. Fast forward to adulthood, and Jim (Daniel Mays) is married to the only woman of seemingly marriageable age in the town (by far his luckiest break), Caroline (Eva Birthistle – who won an IFTA for her performance). They live in a caravan beside their half-built bungalow on the outskirts of the town, while Jim works for his father in the local garage, and Caroline tends bar in her family’s pub.

The Reverend Gabriel Hunter returns from his seminary training, and his time working in the missions, to take over the parish church from Reverend Cray (Mick Lally), as was determined in his childhood. From the moment he is installed in the pulpit, the downward spiral begins, and none are safe from his bombardment of moral proclamations, his fire-and-brimstone war on immorality. The Reverend sweeps into the town with the vehemence of a maverick Texas sheriff, hell-bent on fire-and-brimstone justice, cinematic homage, perhaps, to Johnny Cash, whom Kirk cites as an influence. The problem is that, rather than a man who comes undone in the presence of stubborn immorality, McFadyen’s character appears almost to arrive with the intent, not to reform the locals, but to lose his head entirely.

In the dank back room of the town’s only pub (and even this lacks verisimilitude – what Irish town has just the one pub?) the residents find solace in their weekly cockfights. Solace, indeed, but not pleasure, nor mirth, nor glee, nor the constant barrage of cheap puns and innuendoes one would expect to surround a cockfight in any Irish town. In fact, the inhabitants of Middletown almost entirely fail to respond to their surroundings in any believable way. Rather than use a contemporary lens to satirise an Ireland of the recent past,Middletown profiles the sort of Irish misery that might be easily packaged and sold to an audience too cool for Frank McCourt, looking for an Angela’s Ashes with a bit of edgy sophistication, something for the Tribeca Film Festival set (where Kirk’s feature was first screened).

The only female characters, apart from Caroline, move in creepy unison around church and town. It may not be far-fetched to wonder if this purposely recalls another small-town Irish priest, Father Dougal McGuire, the well-beloved simpleton from Channel 4’s Father Ted, who once described a similar Cerberus-like she-beast of Craggy Island as being ‘like jam – jam made out of old women’. Middletownstrives to move away from the Father Ted brand of parody and into a subtler form of satire, but it moves to a point so distant that it alienates the wit that could have made this more engaging and more entertaining while losing none of its weight. It is a challenge indeed to construct an atmosphere of joylessness without rendering the experience itself unpleasant, and this satirical statement about singleminded zealotry comes across, not as a Gothic satire, but as a one-dimensional dirge of misery. So grim, in fact, that the ‘cock’ reference, the use of the so-twee-it’s-sinister Ulster-American Folk Park as a backdrop, the ooze made out of tut-tutting women – it is difficult to know if these were meant to amuse. But a touch of humour, an acknowledgement that in miserable situations, it is part of Irish life North and South, to laugh, to ‘take the mickey’, to make light of even that which is the most grave, would have thrown the bleakness and the hopelessness into the high relief it deserves.

Kirk deliberately omitted references to the denomination of the Reverend Hunter which, rather than creating a universal fundamentalism on which to comment, confused some international audiences. His vaguely flippant response the comments of one critic, who wrongly assumed Middletown’s religion to be Catholic, reveals another difficulty between Irish directors and international audiences, and that is that rather than tell people something they may not already know about Ireland, they are blamed for not knowing the ins and outs of mid-20th-century Northern Ireland already.

The ‘Middle’ in Middletown was perhaps an attempt to blur distinctions between north and south, old and modern, satire and reality, ‘good’ and ‘evil’, salvation from drink and the damnation from sin, and earthly hell and heavenly paradise, but instead of creating a liminal space in which to explore the nexus between misery and mirth, or between steadfast commitment and terrifying fundamentalism, it instead just sits on the fence and tells the same old tale of woe.

Middletown could have been so much, and yet it was a missed opportunity to share an insight about Ireland or about fundamentalism, or at least to spin a good yarn. Brian Kirk, who also directed the first episode of Showtime television’s hugely successful Irish-American gangster series Brotherhood, is a talented director who summoned a highly talented and established cast of actors for this barn-raising of a feature, but saddled them with an leaden script, while subjecting its audience to a tragicomic experience of an unintended sort.