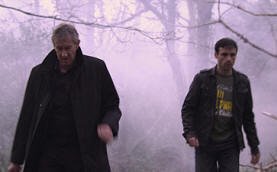 Since the mid 1990s, and particularly from the early 2000s, Irish directors have increasingly turned to horror as a form through which to explore aspects of Irish society, culture, history and, indeed, their representation. Examples include Enda Hughes’ The Eliminator (1996), Conor McMahon’s Dead Meat (2004), Stephen Bradley’s Boy Eats Girl(2005), Patrick Kenny’s Winter’s End (2005), Billy O’Brien’s Isolation (2006), Paddy Breathnach’s Shrooms (2007) and Red Mist (2008), Justin O’Brien’s Ghostwood (2008), Eric Courtney’s Seer (2008), Aisling Walsh’s The Daisy Chain (2009), Conor McPherson’sThe Eclipse (2009) and David Keating’s The Wake Wood (2010). Irish directors have found the genre a useful means of exploring Irish locales and stories through a form familiar to audiences throughout the world. Furthermore, the Armagh based production company Midnight Pictures have specialised in making low budget horror films since the mid 1990s including Zombie Genocide (1993) and Don’t Look in the Attic (2005) while in 1997 the Horrorthon festival was founded by Michael Griffin and Ed King (producer of Dead Meat), to showcase new Irish and international horror cinema as well as offer rare screenings of acclaimed horror classics.1 Apart from feature films, horror has also been a recurring aspect of short film work in this period with some of the most successful Irish shorts choosing this genre, including Emer Reynolds’ White (2001), Tom Cosgrove’s All God’s Children (2002), Brendan Muldowney’s The Ten Steps (2004), Tom Cosgrave’s Rógairí(2005), Ciaran Foy’s The Faeries Of Blackheath Woods (2006), and Alan Brennan’s Shapes(2008).2 Unlike the pastoral idyll associated with Ireland in the cinema through films like John Ford’s The Quiet Man (1952) and more recently The Secret of Roan Inish (John Sayles, 1994) and The Matchmaker (Mark Joffe 1997) (to name but a few) what is interesting in Irish horror film is how the comedic and idyllic aspects of such representations are subverted in dark and disturbing works set in often rural locales that feature little of the pastoral beauty of these films. Indeed rural Ireland is often depictedin contemporary Irish horror film as a place far removed from the welcoming and reassuring locale represented in tourist iconography often influenced by this pastoral tradition in Irish (–American) cinema. It is a space haunted by the hideous monsters of biological farming experiments (Billy O’Brien’s Isolation), or a tortured girl’s nightmares (Eric Courtney’s Seer); populated by meat-eating zombies who appear without warning, attack and devour (Conor McMahon’s Dead Meat); tormented by the traumatised victims of clerical abuse who, it seems until the film’s surprising climax, pick off their victims one by one (in Paddy Breatnach’s Shrooms); and afflicted by an apparently demonic fairy changeling child adopted by an unsuspecting immigrant English couple (Aisling Walsh’sThe Daisy Chain). Interestingly, in both Dead Meat and Shrooms, it is tourists who constitute the central protagonists. In Dead Meat, Spanish tourist Helena (Marián Araújo), lost in the Leitrim countryside and assisted by the local gravedigger Desmond (David Muyllaert) and trainer of the local underage hurling team, Cathal Cheunt (Eoin Whelan), survives her ordeal of Leitrim’s zombies only to be locked up in a truck, like an animal, at the film’s close. In Shrooms, the American students who have come to rural Ireland to experiment with drugs, are all – bar one – horrifically killed by the narratives’ close, hardly a story Fáilte Ireland – the Irish National Tourism Development Authority – would wish to promote. 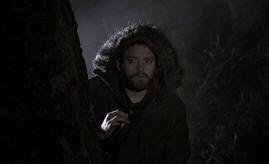 Tourists also have their positive expectations of Ireland dashed in Robert Quinn’s TV filmNa Cloigne (The Heads) (2010), in the form of two French fishermen who are led by the local poacher Diarmaid Ó Máille (Joe Steve Ó Neachtain) to the discovery of the decapitated body of a young woman in a river in the haunted woods beside the fictional village of Cloigeann. Na Cloigne began as a three-part mini-series first broadcast in January 2010 before been edited into a 2 hour feature film, broadcast at Halloween on TG4. While sharing similarities with other Irish horror works, Na Cloigne is distinctive in that it is the first feature length Irish language horror film. The Irish language features in all of the international “pastoral idyll” features mentioned above, rarely however does it rise above providing local colour – indeed the language cannot function for most of its hoped-for audience, often in the United States, above this level as none of these films include subtitles and therefore the local Irish speaker and the language itself are effectively silenced. However, director Quinn and screenwriters Lauren MacKenzie and Darach Ó Scolaí use the language convincingly in Na Cloigne as a natural part of the landscape and culture in a drama set entirely in the Connemara Gaeltacht and featuring some of the leading actors of Irish language theatre and television, several of whom will be familiar to Irish viewers from prominent roles in the popular Irish soap opera “Ros na Rún”, including Macdara Ó Fatharta, Áine Ní Dhroighneáin and Joe Steve Ó Neachtain.

Na Cloigne is set on the edge of a haunted wood where local DJ Seán Ó Dónaill (Darach Ó Dúbháin) and artist Nuala Ní Dhireáin (Siobhán O’Kelly) are having relationship problems which come to a head when Seán brings back two girls from the local pub to their house one night. An understandably furious Nuala chases the girls out of the house and drives off herself. The following day the naked decaptitated body of a woman is found in the woods and when Sean awakes with no memory of the night before but to find his T-shirt covered in blood and a bag containing a head left in his kitchen, he begins to suspect that he may have been responsible. The film then follows the attempts of the local Gardaí, led bySuperintendent Ó Sé (Barry McGovern), to unravel the events that led to the death of this girl and another whose similarly decapitated body is found shortly after. Barry McGovern is excellent as Superintendent Ó Sé and brings his considerable experience to bear on a role that might have appeared hackneyed if played by a lesser actor. Ó Sé is an officer worthy of the X-files combining acute observational abilities with the capacity to sense supernatural voices and emotions from the ‘other side’. When Nuala is discovered in her crashed car, unconscious and in a coma, shortly after the first body is found, Ó Sé senses that she is trapped on a threshold between this world and the next and that only Seán can bring her back.

Combining handheld camera work with impressive effects to create this ‘other world’ and the mysterious threatening hooded figures haunting the woods nearby, Na Cloigneundermines the romanticised vision of the West. Like Bob Quinn’s Póitín it eschews the sweeping coastline and whimsical characters and is similarly set in a seemingly isolated village inland populated by troubled and sometimes unsavory characters, such as poacher Diarmaid Ó Máille, a figure reminiscent of Niall Toibín’s Poitín seller Sleamhnán.

full awareness stops at the level of plot, action and character, in which the most dangerous and subversive implications can disguise themselves and escape detection … this is why seemingly innocuous genre movies can be far more radical and fundamentally undermining than works of conscious social criticism.

The West of Ireland, and Gaeltacht communities, have long been the subject of questionable representations – an issue that also partly inspired another film produced this year, Risteard Ó Domhnaill’s excellent TG4 funded documentary An Píopa /The Pipe) (2010).  ((This film, reviewed below by Eileen Leahy and Harvey O’Brien, documents the protest of the Gaeltacht community in Béal an Átha Buí, North Mayo against the development by Shell of an onshore gas processing facility in their locality. Ó Domhnaill has acknowledged in a visit to the Huston School of Film & Digital Media in November 2010 that a major concern in making the work was to address the serious misrepresentation of the local people and their protest in the national press and media, on occasion associating a community based protest with elements of the real IRA and indeed on one occasion, with a Polish anarchist. (See http://www.shelltosea.com/content/correspondence-press-ombudsman-complaint-sunday-independent for further on this))) The unsettling observational camerawork in Na Cloigne focused from the woods on the village of Cloigeann itself and Seán and Nuala’s home, while suggesting a community constantly being watched by threatening forces, could also be interpreted as a community deeply uncomfortable with its construction from without. As noted by Zélie Asava with regard to the observational camerawork of The Daisy Chain in last year’s edition of this review, such cinematography “obscures and constructs our view of this world, just as the picturesque view of the rural is itself a construction.»3 Na Cloignebelies its limited TV budget to create a convincing and at a times deeply unsettling locale and is another significant step forward for drama in the Irish language.