Nature and the Environment in Nineteenth-Century Ireland.

Nature and the Environment in Nineteenth-Century Ireland.

by Marie Mianowski. This text may be archived and redistributed both in electronic form and in hard copy, provided that the author and journal are properly cited and no fee is charged for access. 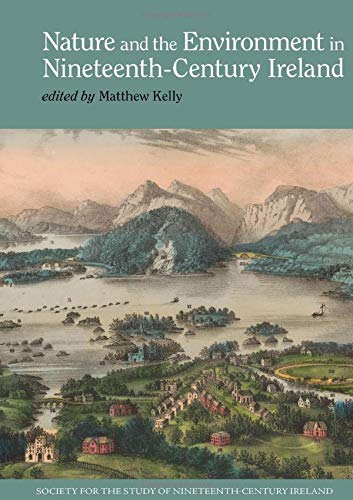 As announced in the title, the ten chapters assembled in the very stimulating volume Nature and the Environment in Nineteenth-Century Ireland, edited by Matthew Kelly, all address the issues of nature and the environment in nineteenth-century Ireland. In the introduction, Matthew Kelly explains that the aim of the book is to fill a gap in Ireland’s environmental history. And even if not all the contributors of the book work in the environmental humanities, each chapter opens fresh perspectives and identifies new areas of research. The originality and the excellence of this book reside precisely in the diversity of the fields investigated by the contributors who, in their individual areas of research, show how nineteenth-century Irish history and literature can be reassessed and better understood when the issue of the environment becomes the central critical focus.

In the introduction, Matthew Kelly explains very precisely both the role of the book in scholarly work on the environment, and the paradox it aims at solving in Irish history. Although the Land Acts, agrarian reforms, as well as the Great Famine have been the object of a great many scholarly works over time, the nineteenth century has never been researched from the perspective of nature, the environment, and the complex fabric of the human and non-human. It seems all the more paradoxical as land, crops, and soil were at the heart of crucial events and political arguments during that century.

The book opens with four chapters dealing with various social issues and portraits of politically committed people in nineteenth-century Ireland. The first chapter on “The Nature of Improvement”, by Helen O’Connell, shows how the notion of “improvement” itself was instrumental in blending or blurring the limits between the social and the natural and how the discourse on improvement tended to prove that nature was culturally determined. O’Connell demonstrates how the “excess of naturalness”, which characterised discourse about Ireland and was contrasted with the “more improved” condition of England, meant that the whole country was perceived as under-developed. Chapters 2 and 3 showcase the actions of two men in relation with the environment, tying the knot between environmental factors and political actions and discourse. In David Brown’s chapter “Palmerston and the Conquest of Sligo”, Viscount Palmerston’s (1784-1865) actions are described as key factors in social, economic, and environmental change. In chapter 3 “‘A Voice for Ireland’: Isaac Butt, Environmental Justice, and the Dilemmas of the Irish Land Question”, Colin W. Reid explains how Isaac Butt (1813-1879) defended Irish tenants because he thought that the Union should benefit Ireland and not just the imperial power, since, in his opinion, land reform should lead to environmental justice.

The three following chapters focus on aspects of life and events in nineteenth-century Ireland which were directly concerned with the environment and which, for that reason, open new perspectives for the present day. In “Therapeutic Environments in Nineteenth-Century Ireland: Hybrid Spaces and Practices”, Ronan Foley defines hybrid spaces and practices as the consequence of the blurred relations between culture and nature. He studies how the two combined together can co-produce healing and stresses how making sense of those hybrid spaces might influence our understanding of present-day ecologies. In “On Why the UK’s First National Park Might Have Been in Ireland”, Matthew Kelly raises questions about the role of the state in safe-keeping places of natural beauty in nineteenth-century Ireland and its connection with present-day policies, while Juliana Adelman explains the place of animals in Dublin in the nineteenth century in a chapter entitled “Towards an Environmental History of Nineteenth-Century Dublin”, showing how the River Liffey divided the city of Dublin into four quadrants which defined different relationships between humans and non-humans. She shows how the sociology of Dublin and the organisation of human life are related to the presence of living nonhuman animals.

Finally, the last three chapters address environmental studies through the perspective of singular publications. Mary Orr’s chapter deals with a very specific aspect of natural history and shows how essential an inter-cultural and inter-disciplinary history of the natural sciences is, in order to understand the colonial history and geography of Ireland. In “Mainstream or Tributary? The Question of ‘Hibernian’ Fishes in William Thompson’s The Natural History of Ireland (1849-56)” Orr argues for the need to historicise the terminology and systems of classification in the middle of the nineteenth century, because those frames of reference are often different from those in use today, and because they had consequences in the shaping of intercultural relationships. Finally, Nature and the Environment in Nineteenth-Century Ireland concludes with considerations of works of fiction and poetry. Patrick Maume examines two novels by Emily Lawless in chapter 9, “The Ocean of Truth: Atlantic Imagery in Emily Lawless’s Major Lawrence, F.L.S. (1885) and Grania: The Story of an Island (1892)”, where he explains how Lawless navigates the quandary between the anti-teleological views of the Darwinian tradition and the need for scientific explanations of natural phenomena. In the last chapter, Seán Hewitt writes about the poems of Seumas O’Sullivan and their power to re-enchant the world. In “Seumas O’Sullivan and Revivalist Nature Poetry”, Hewitt explains how a relatively unknown poet used scientific knowledge as a way of re-enchanting nature, all the time trying to find a balance between the material, the spiritual, and the natural, making nature agential to both the material and the spiritual. Through its three final chapters, Nature and the Environment in Nineteenth-Century Ireland concludes by emphasising the necessity for the entire spectrum of research on nineteenth-century Ireland to revisit that century of Land Reform Acts, Catholic Emancipation, and famines in the light of nature and the environment, not only to reassess and refine our understanding and our knowledge of that period, but to update the critical tools, the vocabulary, and the concepts used to understand how natural spaces, landscape, and place were intricately woven within a fabric of human and non-human agents, of material, spiritual and natural elements which all influenced political decisions in ways that need to be explored anew. This exemplary and very welcome book fulfils wonderfully its goals to spark new ideas and clear fresh grounds as every chapter invites readers to explore various paths across the nineteenth century, including ones thought to be already well-trodden.