by Eoin Flannery. This text may be archived and redistributed both in electronic form and in hard copy, provided that the author and journal are properly cited and no fee is charged for access. 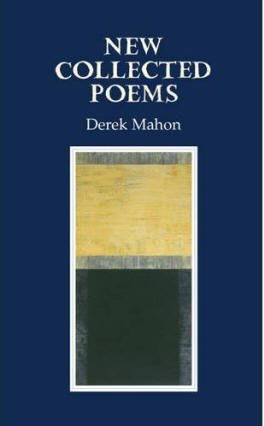 Such has been Derek Mahon’s productivity since the publication of hisCollected Poems by Gallery Press in 1999, that it is not entirely surprising to see the recent appearance of his New Collected Poems in 2011 under the same imprint. In the last seven years alone, Mahon has published: Harbour Lights (2005); Adaptations (2006); Life on Earth(2008); and An Autumn Wind (2010). And what is remarkable is not simply the quantity of Mahon’s new poetry, but, more importantly, the signal quality of much of this later effusion. There remains the stylistic formality of the earlier work, and a concentration on aesthetics; displacement; and politics. Likewise Mahon treats of the diverse topographies through which he has travelled and resided, alerting us, once again, to his ecological vision. Yet, it seems, in these more recent works that there has been a qualitative change in the nature of this ecological vision. Certainly, Mahon employs the deformities and excess of urbanised global capital in this recent poetry, but there are intimations that this later Mahon is confronting environmental history from a more ‘green’ political standpoint. In a sense, the poetic voice frequently assumes the tones of ecological advocate for the assailed natural world; forcing a reckoning or, at least reflection, on the past, present and future of all ‘life on earth’. Ranging from a largely American-based ‘ethics of proximity’, which values the ecological credentials of place-dwelling and situated, responsible living, to advocates of planetary ecoconsciousness, the geographical nodes of on-going ecocritical debates are pitched between the intimately local and the macroscopically global. The ecological concentrations of Mahon’s recent collections meditate on the relationships between human and non-human ecologies; on matters of ecological belonging and placelessness, in local and international contexts; as well as probing the ethics of anthropocentric historical narration in terms of geological time and the ‘deep’ past.

By far the most sustained of Mahon’s ecopoetry in Life on Earth is the sequence, ‘Homage to Gaia’; in fact, the sequence is one of the most explicit examples of the coincidence of ecoconsciousness and poetry in contemporary Irish writing. While the sequence cannot measure up to either New York Time or Decadence in terms of sheer length, as well as assuming an alternative formal structure, nevertheless, its relative length and protracted treatment of ecological issues recalls those earlier epistolary and reflective meditations on urban, modern life patterns, which are, of course, ecological in their own ways. Yet, as stated above, there are tonal and thematic divergences between the later sequence and its predecessors, though an ecological sensibility conjoins the earlier work and more recent volumes. In entitling the sequence, ‘Homage to Gaia’, Mahon signals his concern with a specific, and not uncontroversial, school within contemporary climate science.

In both ‘Blueprint’ and ‘World Trade Talks’ from An Autumn Wind, Mahon picks up on the potentially restorative ecological agency of the past in the present and towards the future. Juxtaposing the patterns of urban living in New York City, and thereby cursorily re-visiting the cityscape of New York Time, with a less corporatized worldview rooted in the past, ‘Blueprint’ insists that: ‘There was a blueprint from the past/ but scribbled on by guilty pens/ till it was virtually effaced’. The vehemence of the faith in a historical source is joined by a sense that the source itself was/is, in some respect, taboo or clandestine, and is qualitatively different from the etherized scripts of the internet and digital knowledge. Not only is the unspoken source a suggestive alternative to the present of ‘Trucks from New Jersey (fruit and veg),/ panting beneath the window ledge […] Jeep, Dodge and commuter trains […] [and] the corporate buzzards’, but it is cast in morally ambiguous terms – though this seems to be inconsequential given its inevitable supersession or obsolescence in contemporary times. And the supersession of the titular ‘blueprint’ is described in further ambivalent language; Mahon’s placement of the word, ‘virtually’, means both/either partial but extensive effacement, and that said ‘blueprint’ has already been effaced through technological means. And the uncertainty here is important, because if the former is favoured, then the ‘secrets the ancients understood’, referred to at the close of the poem, are resilient and constitute stubborn utopian survivals or potentials from the past in the present. Whereas the latter, clearly, intimates the future has succeeded, and the past has been processed out of any informative relevance. So, given the impulses divined in ‘Ithaca’, earlier in An Autumn Wind, it appears that Mahon tends towards the former, a point that is only endorsed in ‘World Trade Talks’. The latter poem is an uncompromising confrontation with ‘the winds/ of double-edged finance […] the Chicago Boys, the World Bank and the IMF,/ the dirty tricks and genocidal mischief […] the war machine’. Abstract financial trading, together with the institutions and philosophies that motor and underwrite the dizzying formulae of inequality and exploitation, jostle for space in Mahon’s poem with his own pleas for change, and his apostrophized praise for the critic, Naomi Klein. Amidst the dehumanizing intrusions and agenda of the institutional bodies listed above – whose antics Mahon gestures to in striking a partial rhyme with ‘IMF’ and ‘mischief’ – ‘World Trade Talks’ urges for the consideration and imagination of other ways of living in and thinking about the world and its future. By way of contrast to the rhetorics of violence and manipulation, which attach themselves to capitalist and militarist technocracies, in each of the four stanzas Mahon registers a note of hope or resistance. From the first stanza we hear him ask: ‘organic crops/ and comely maidens, is it too late/ to push for these demands/ and pious hopes?’ Mahon’s irreverent nod to DeValera’s prescriptive social imaginary does not invalidate the serious political intent of the query, or defuse the hope contained therein. In the middle two stanzas, he employs ‘fight back’ and ‘survives’, suggesting subversion and endurance, and, in particular, the notion of survival is consistent with the thematic and political keynotes of the poems discussed thus far. And survival is the dominant feature of the concluding stanza in ‘World Trade Talks’, as the poet envisions the future through a constructive use of the past. Coming full circle from the opening stanza: ‘Next spring, when a new crop begins to grow,/ let it not be genetically modified/ but such as the ancients sowed/ in the old days’. Again there is an explicit allusion to the guiding wisdom of the ‘ancients’, of the past; Mahon conveys the idea that tradition is a viable imaginative agent in the present, and is not an obstacle to ecological and political awareness.

With the addition of new poems, as well as the more explicit ecological orientation outlined in the poems above, New Collected Poems also sees Mahon dispense with earlier poems such as: ‘The Forger’; ‘The Apotheosis of Tins’; and ‘A Kensington Notebook’ from his self-selected personal canon. The erasure of ‘The Apotheosis of Tins’ does appear incongruous, considering its direct thematic and political relevance to the renewed ecological attentiveness of his newer work. Besides these deletions, Mahon has also chosen to re-title a number of individual poems and longer sequences. So we note: ‘De Quincey in Later Life’ (1999) and ‘De Quincey at Grasmere’ (2011); ‘Thinking of Inis Oirr in Cambridge, Mass.’ (1999) and ‘Inis Oirr’ (2011); and ‘Morning Radio’ (1999) and ‘Radio Days’ (2011). Of more significance are the substitutions in longer works, where ‘New York Time’ replaces ‘The Hudson Letter’; ‘The Yellow Book’ gives way to ‘Decadence’; and ‘The Yaddo Letter’ becomes ‘Yaddo, or A Month in the Country’. Whatever about the titular changes to the shorter poems above, these changes to longer poems really do not add any value to the titles they have replaced. The fin-de-siècle resonances of ‘The Yellow Book’ are sorely missed, while the epistolary subjectivity of the other two works are jettisoned to little improved effect. Nevertheless, New Collected Poemsis a substantial volume, a testament to a singular voice in modern Irish poetry. Mahon is a poet of conscience, of irony, of the local and the cosmopolitan, and is a writer characterised by an exemplary humanism, as well as an advanced ecological vision.