by Eduardo Barros-Grela. This text may be archived and redistributed both in electronic form and in hard copy, provided that the author and journal are properly cited and no fee is charged for access. 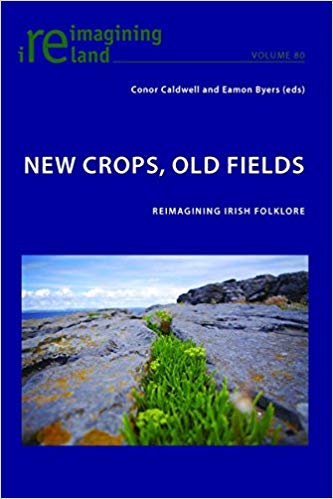 Traditionally, Irish cultural research has disclosed a rising interest in the discussion of folklore as a cultural artifact in the production of contemporary identities. In particular, scholarly research has focused on the controversial topic of the production of national identifications, which might be considered as marginal in other geographical European environments, but is central to the liminal position of Ireland within Postcolonial Studies. Certain studies are pivotal in the articulation of theory and non-fiction film, and noteworthy examples of such studies could be Eoin Flannery’s works on Irish cultural studies or Declan Kiberd’s study on subjectivity and postcolonial writing.

New Crops, Old Fields: Reimagining Irish Folklore embarks on the discussion of how tradition works and how it is represented in literature, film, and the arts. The authors introduce the concept of construction as a metaphor to articulate folklore, in the terms of a contemporary recycling of original cultural discourses. By examining this concept, authors Byers and Caldwell do not dodge the problematic definition of tradition, but rather embrace its contradictions and celebrate the controversial nature of the term—not only semantically but ideologically too. They refer to the importance of tackling this notion from diverse approaches that study the relevance of tradition in the construction of a national identity, as cultural nationalists began doing in the nineteenth century, when they “succeeded in researching, recording, reviving and, yes, inventing, folkloric traditions” (2). The provocative position adopted by the authors in their introduction to the book unambiguously draws from Homi Bhabha’s notorious opening of Nation and Narration:

Nations, like narratives, lose their origins in the myths of time and only fully realize their horizons in the mind’s eye. Such an image of the nation – or narration – might seem impossibly romantic and excessively metaphorical, but it is from those traditions of political thought and literary language that the nation emerges as a powerful historical idea in the west. … This is not to deny the attempt by nationalist discourses persistently to produce the idea of the nation as a continuous narrative of national progress, the narcissism of self-generation, the primeval present of the Volk. (1)

Reimagining Irish Folklore adheres to this controversial dichotomy in the production of popular culture as an identity marker, and encompasses a variety of contributions that support this critical premise by offering diverse approaches to the study of the folklore.

The first chapter Diarmuid Ó Giolláin’s “Folklore: A Zombie Category”, delves into the editor’s preoccupations about the semantics of “folklore,” and projects the discussion into the current alignment of academic studies with anthropocentric reterritorializations of the discipline. The endurance of folklore as an independent field of study underpins, therefore, Ó Giolláin’s reclamation of historical discourses to shelter the autonomy of folkloristics. Thus, the historical deconstruction of the concept reveals, according to the author, its current cultural connotations, which are often associated, in the Irish context, with national sensibilities. He argues that “[w]hile folklore could be interpreted as transmitting a national tradition, it was inherently fragile” (15). Giolláin articulates this idea with his discussion of the ontological plausibility of the “popular”, which he situates in the performative component of cultural production, a position that had already been supported by Ulrich Beck in 2002 and García Canclini ten years earlier. The question of cultural authenticity also hovers around Giolláin’s well-documented research, and following Steven Feld he alludes to the resignification of the concept as a distinctive quality that can be found in the twenty-first century emergence of explicit hybrid cultural identifications. All in all, this chapter works adequately as the opening contribution to the book, because it offers a social, historical, and academic contextualization of the term “folklore”, thus facilitating the readers’ engagement with the chapters that follow.

One of the contributions that benefits from Giolláin’s theoretical introduction is Manuel Cadeddu’s “Legends and Oral History in Bram Stoker’s The Snake’s Pass. In his analysis, the author leans on Benedict Anderson’s claim that nationalism and nationality are “cultural artefacts” (4) to observe the creation of an Irish identity as well as its representation in Stoker’s narrative production about Ireland’s folklore. In particular, Cadeddu refers to the violent nature of Irish traditions, which are based on discontinuity rather than stability and conservatism, as is usually the case with folkloric discourses (37). His acute examination of the common memory of Irish narratives of tradition allows him to observe in Stoker the goal of preserving the national identities of the past and while consolidating them with modernization in order to create – or imagine – a thriving and independent future.

Anjili Babbar and Rebecca Long follow similar lines of argumentation in their respective chapters (3 and 4) to discuss oral tradition and music as an essential part of Irish folklore. While the first uses the literature of Frank Delaney to explore the relevance of subjectivity in the production of historical discourses, not only in the oral tradition but also in the narrative attempts to reconcile orality and written historical accounts, the second also focuses on subjectivity to discuss the “performative nature of story and music” (53) to unveil cultural constructs and reimaginations of tradition. Both authors agree about how the inquisitiveness of Kate Thompson and Frank Delaney manifests an urge to find new ways of reimagining and regenerating the key events in Irish tradition, a practice that would both reinforce and renovate the production of folkloric identifications.

There is yet another set of contributions in this volume that study music as one of the most important components of Irish folklore. Chapter 5 introduces Maria Byrne’s intertextual approach to Valse Shilly Shally, “an Irish expression of the Viennese Waltz” (65). Although the editors claim in their introduction that “many scholars have been historically frustrated by Ireland’s failure to produce an internationally renowned composer whose language imbues that of ‘traditional’ forms of Irish music” (6), they also recognize that Byrnes’ exploration of Harry Hardy’s idiosyncratic assemblage of Irish dances and melodies opens new – and innovative – forms of research about the impact of Irish music on mid-nineteenth-century recollection of traditions, particularly from the perspective of the band of the Royal Irish Constabulary. This chapter evidences an appropriate research methodology, based on the author’s use of newspaper archives.

In “Musical Interpretations of Fenian Literature by Contemporary Irish Composers”, Angela Horgann Goff also pays attention to the connections between folklore and music. The writer approaches the correlation between cultural discourses and the production of identity to explore contemporary musical revisions of major episodes from the Fenian Cycle. Her examination of Tír na nÓg-inspired works by composers Philip Hammond, Eric Sweeney, and Elaine Agnew – considering the differences in each composer’s stylistic construction – provides a musical and textual analysis that reflects the timelessness of the Fenian tales. Horgann Goff successfully links the pluralistic interest of these creators in this discourse of Irish folklore to the recent attention – from both scholars and general audiences – to the connections between literary and musical traditions. The author ends her chapter with a reflection on the operation of folklore and its impact on contemporary identifications, claiming that “…the eclectic responses to the tale do not expunge musical ‘Irishness’; rather, they embed it in an evolving modern Irish cultural context” (98).

Although the contributions in this collection offer an intersectional and transdisciplinary approach in most cases, the structure of the book lets the reader go from a theoretical chapter about folklorism to two blocks of essays which are centered, respectively, in literature (chapters 2, 3 and 4) and music (chapters 5 and 6). After these first glimpses of folklore through a literary and musical lens, the second part of the book offers a compendium of studies centered on cultural discourses and diverse – and still transdisciplinary – focalizations: drama, film, and cultural studies.

Chapter 7, by Daithí Kearney, studies the articulation of music and drama through the themes of Samhain and Hallowe’en, and he pays particular attention to two different performances, both entitled Samhain, produced by Siamsa Tíre, The National Folk Theatre of Ireland. Based on the form of folkloric theatre, including song, dance, and music, these performances draw inspiration from the past, according to Kearney, to provide relevant significance to a contemporary audience (100), and have therefore a high pedagogical interest through the use of folkloric elements to engage modern audiences.

In “From Page to Stage and Beyond: (Re)Imagining Cré na Cille,” Eilís Ní Dhúill presents a comparative study, as her title indicates, of Máirtín Ó Cadhain’s novel (1949) for various stage adaptations and one for film in 2006. Focusing on the power of memory, the author looks at these adaptations of the novel as they reflect on the transmission of cultural traditions to younger generations, who reinterpret storytelling through (post)modern performances.

Intergenerational communication through film is also the subject of Jack Casey’s contribution on “Mother Ireland: Folklore and the Fractured Family in Irish-Themed Cinema” (Chapter 9). The author examines four Irish films produced in the last twenty- five years (Into the West, The Secret of Roan Inish, A Shine of Rainbows, and Ondine) through a lens directed at the folkloric transmission of the mother in Ireland as cultural icon, and how it is being reconstructed from a multicultural point of view.

Chapters 8 and 9 are therefore interested in looking at the possibilities of adapting folklore to contemporary times with the use of non-traditional narrative forms. Such adaptations should be interpreted as a effort in the conservation and reconceptualization of the discourse that create a particular set of identities and identifications, in this case in the area of Irish folklore. These contributions are consistent with Ben Simon’s in “Discovering and Celebrating Ireland’s Tree Folklore”, the final chapter of this collection. Simon’s exquisite research into the cultural discourses produced by and around trees in Irish folklore enhances the critical aspirations of this book. Here again traditional diverse forms of narrative are read from a renovating perspective to keep telling things about Irish identities, not only from the past but also in their modern-day forms. For example, Simon refers to “The Forest of Belfast,” an urban project (1990-2014) created to encourage “a tree culture” among citizens that investigated the veiled oral narratives – and cartographies – around specific trees and types of trees, which encapsulated living traditions and folklore themes.

This collection of essays succeeds in compiling a set of current foci of folklore studies in Ireland, and offers a variety of insightful perspectives on the subject. Directly drawing on Locating Irish Folklore: Tradition, Modernity, Identity, the famous study authored by Diarmuid Ó Giolláin, leading voice in Irish folklore studies and one of the contributors to the present volume, New Crops, Old Fields successfully fills the gap in the contemporary study of Irish traditions and folklore from a transnational, transdisciplinary, and cultural perspective. Intended for a scholarly audience with expertise in Irish folklore studies, the editors of this volume provide an interesting and stimulating composition that brings together the new explicitness of the Irish cultural sphere, explained through discourses of diversity, migrations, and globalization, and the traditions that inform its connection to the folkloric past. I am convinced that this book will open up new lines of research into the treatment of Irish folklore. Its emphasis on the relevance of new forms of looking at traditions opens new windows to the study of Irish identities. This call for further research is a testimony to Caldwell and Byer’s success in their captivating volume.