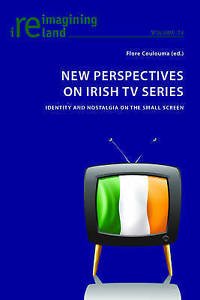 Subtitled “Identity and Nostalgia on the Small Screen”, Flore Coulouma’s reader on Irish television series might just as well have included some reference to the Celtic Tiger and its aftermath on its front cover. This is very much a zeitgeist collection, and barely a contributor fails to reference the new Irish society of the boom years or the crash in public confidence when the end came. It is, in this way, a timely collection of essays and fills a useful gap in Irish television studies. Not all the essays cover recent productions; in fact, the opening essay by Sylvie Mikowski is devoted to the four-part series, Family, scripted by Roddy Doyle and first broadcast in 1994. She interestingly locates this within the British social realist/documentary tradition, an influence contingent upon the choice of Michael Winterbottom as director. Where it departs, she argues, from that model is that the series does not propose any cultural resistance in the shape of an authentic working-class culture. Just what she intends by the term “authentic” is not quite clear since she also refers to Ballymun as a symbol of the forgotten, marginalized Irish working-class. Perhaps it is more the notion of resistance that is most useful as an argument here. Certainly, Doyle’s tone shifts considerably in this series from his earlier “Barrytown Trilogy”, with its celebration of working class resilience in the face of circumstances not of their own making, to an image of marginalised suburban identities, whose ability to fight back, or even to form a cohesive community, is negligible such is their abjection.

Mikowski discusses Family as exemplifying a “form of dark naturalism” (23) which she traces back to writers of the twentieth century from George Moore and James Joyce through John McGahern and Dermot Bolger. This project, of debunking the myth of the “poor but happy” Irish is shared by a number of television productions discussed in New Perspectives on Irish TV Series. Thus, Sheamus Sweeney turns his attention to Prosperity, the four-part series written by Mark O’Halloran and directed by Lenny Abrahamson which was broadcast on RTÉ in 2007. A day-in-the-life of Dublin told from the perspective of four different characters, Sweeney is right to bemoan RTÉ’s neglect to publish this on DVD or any other accessible format, a complaint that could be applied across the board, and certainly has hampered the development of Irish television studies. Since then, Prosperity has circulated as kind of samizdat offering, in exchange perhaps for some other jewel from RTÉ’s past, like A Week In the Life of Martin Cluxton (RTÉ, 1971). Indeed, placing those two side-by-side would provide an interesting commentary on the relationship between RTÉ’s programme makers then and now. Sweeney too considers the influence of British social realism on contemporary productions, arguing that Prosperity benefits from its makers’ lack of didacticism, and its refusal to act as a vehicle for social transformation. In particular, he notes how the series refuses to demonise the authority figures who stand in for the (invisible) state apparatuses but also refuses to embrace the neo-liberal position of blaming the poor for their poverty. If there is one overarching point to be taken from Prosperity, then, it is that poverty infantilises those who are caught in it.

If Family and Prosperity are productions that are clearly informed by a desire to investigate social disadvantage through fictional forms, then other RTÉ series are more evidently escapist in their audience appeal. Deirdre Quinn, for instance, discusses the popular police procedural, Single-Handed (RTÉ, 2007-2010), which was broadcast in the period from the end of the Celtic Tiger, through early austerity; while Catherine Conan looks at the Quirke adaptations (BBC, 2014). Both are very different and the critical fate of Quirke was rightly derisory. Single-Handed, on the other hand, was well-acted, scripted and shot, with the kind of remote rural setting that has been productive ground for detective fiction in the UK and elsewhere and the forum for examining an older culture of secretive dealings. The series drew its inspiration from the revelations of Garda corruption in Donegal and is focused on the repressions of Irish rural life that emerge in a series of criminal investigations. In season one (“Natural Justice”), Quinn writes, “the complicities of communities and close family members in concealing instances of abuse” form a consistent narrative thread. “It also examines a layer of society that was largely unseen until scandals surrounding the sexual and physical abuse of children in the care of both the Catholic Church and the State emerged in the 1990s” (76-77). What is interesting about the series, is Quinn’s assertion that the past “unleashes the potential to undo the present” (79). The accusation so often levelled at films about the Irish past, The Magdalene Sisters (Peter Mullan, 2002), for instance, is that their narrative closure affirms the pastness of the past. This leaves the viewer in a safe place, at a distant remove from an old history of Irishness that is no longer part of their world, particularly the world of the Celtic Tiger. Single-Handed instead insists that little has changed in the present, which is as corrupt, if in a different way, to that older Ireland. Indeed, little can change in a rural Ireland insulated from outsiders. Benjamin Black’s (aka John Banville) period detective thrillers, from which Quirke was adapted, were, on the other hand, written in the Celtic Tiger years but made in the post-Celtic Tiger era. The question that this raises for Conan is whether the subversive power of noir can survive the re-mediations of the contemporary TV series. These remediations, she argues, allow for the foregrounding of a specific Irish obsession over questions of paternity and filiation. I am not so sure just how specific to Ireland these questions really are, and there is a danger of drawing overarching conclusions about national identity from a very flimsy text that in turn found little favour locally. However, Conan makes interesting, if broad claims for Quirke as speaking to social discourses in post-De Valera Ireland around paternal legitimacy, and post-Crash society’s collective guilt following the sexual abuse revelations. Reflections on the culture of violence in Irish society are also the topic of Flore Coulouma’s analysis of Love/Hate (RTÉ, 2010-14). She argues that the popular series allowed for Irish audiences to understand violence in the relational context of post-capitalist societies and global TV series such as The Wire (HBO, 2002-08).Thus Nidge (Tom Vaughan-Lawlor) and his fellow gangsters model themselves on American gangsters. Yet the series retains its sense of the local both through place and accent, but also through its being part of a tradition that includes The General (John Boorman, 1998), and (she might have mentioned), older Irish films such as The Courier (Frank Deasy, Joe Lee, 1988). Coulouma’s analysis of recent Irish television’s project as reflecting on the fundamental rottenness of Irish society is one she shares with the majority of this volume’s contributors.

Another thread running through this collection is the question of how contemporary entertainment productions deal with older national stereotypes. In his essay on The Savage Eye (RTÉ, 2009-2014),Thierry Robin considers how David McSavage (aka David Andrews jnr.) its co-creator and star, tears into a series of recognisable Irish types – the priest, the politician, the rural publican – with scant regard for political correctness or the sensitivities of the television audience. Nor does it spare national treasures, such as Mary Robinson, Pat Kenny and Joe Duffy, the latter consistently portrayed as being aroused by the misery stories related by members of the public on his hugely popular confessional phone-in radio show. Yet, under this display of anarchy, Robin astutely notes: “the series is actually driven by a highly moralizing political agenda denouncing corruption, sleaze, incoherence, superficiality, hypocrisy, intolerance – e.g. homophobia, racism, bigotry, sectarianism, chauvinism. As usual with satire, the transgression on the surface hides a craving for order at a deeper level” (98). Still, the series reflects on many of the new formations of the Celtic Tiger era, most notably the reversal of fate that sees the Irish, once the victims of racism, now proved to be racist themselves. Thus, old stereotypes are replaced with new and the series usefully draws attention to the anxieties of the new post-Celtic, post-Capitalist, post-Catholic Ireland around questions of national identity and belonging.

The theme of nostalgia promised in the book’s sub-title emerges in relation to one particular series, Moone Boy (Sky One, 2012-15). Based on actor Chris O’Dowd’s personal recollections of growing up in small-town Ireland, the series was hugely popular both in Ireland and overseas. Anthony McIntyre analyses Moone Boy as informed by O’Dowd’s “down home” persona and his distance from the hedonistic excesses of Celtic Tiger-era stars such as Colin Farrell and Jonathan Rhys Meyers. This is then located within a space (small-town Ireland) and time (the late 1980s) before the country was transformed by the boom economy. The kind of nostalgia evoked by this reinvention of an Ireland of simpler times, McIntyre convincingly argues, speaks to an attempt to “shore up a fractious present through recourse to a more optimistic past” (145). In this happy past, the Moone family’s relative poverty brought them together rather than destroying them as it might have in a series set in post-Celtic Tiger Ireland. Yet, at the same time, as he argues, the series speaks to male anxieties around the erosion of authority during the recession (or mancession, if you must). Where it allows for a reading as a progressive text is in its refusal to render weird the youngsters’ playful attitude to conventional masculine roles.

Several of the series analysed in this collection are literary adaptations and the book ends with Ruth Lysaght’s analysis of three short Irish-language adaptations for Irish-language broadcaster, TG4. Unusually for this volume, the past here is seen not as the bearer of unspeakable histories but as a repository of cultural riches, heretofore buried as a consequence of the minority status of the Irish language in which the original stories were written. What Lysaght’s essay does have in common with the other contributions is a light theoretical touch. It is interesting how little existing theoretical (as opposed to historical) work exists on Irish television for these contributors to draw on and develop, which in turn points to the under-development of Irish television studies as a discipline. This very useful reader goes some considerable way to righting this and one hopes will inspire others to follow. It is also to be hoped that future generations of Irish television scholars will have at their disposal greater access to Irish programme making than is currently the situation, and which will allow this emerging discipline to take its place amongst other national television studies.