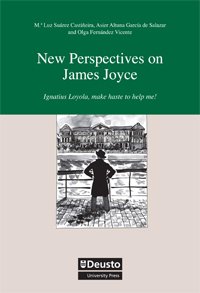 One of the most famous phrases attributed to James Joyce is the one where he hoped to keep the critics occupied with his work for at least 100 years. And as the editors say in the preface, “since James Joyce’s death in 1941, his work has been subject to intense scrutiny by scholars of all ages throughout the world. At the end of the first decade of the 21st century, research goes on unabated”. James Joyce went down in history as an emblem of what the Irish critic Colm Tóibín has called “dual identity”: the writer torn between loyalty to his roots in Ireland and his need to rewrite it in other places and with other linguistic and literary codes. He is without question a paradigm of the continuous journey in search of places where Ireland could be rediscovered and reinvented.

We have seen fit to include this paragraph as a preliminary substratum in order to adequately assess the contributions of the volume in question. First we should celebrate the fact that it is the University of Deusto who is undertaking a new approach to the figure of Joyce. It is undeniable the great influence that the Jesuits had in training the writer on different levels and in the very title of the conference which originated this publication — the 20th Conference of the James Joyce Spanish society, under the topic “the Jejune Jesuit Back in Ithaca. 23-25 April 2009 —, we find allusions to the schoolboy under the tutelage of the Jesuits.  And the second part of the title of this publication is a quotation from Ulysses (U9.163), alluding both to Saint Ignatius, founder of the society of Jesus and to his birthplace, now the sanctuary of Loyola in Azpeitia (Gipuzkoa, Spain).  However, it is noteworthy that only one of the articles, “Allude me as a Jesuit: James Joyce and His Educators”, by Bruce Bradley, is concerned with this theme, consequently this leads us to acknowledge that the weakest aspect of the volume is some lack of consistency between the second part of the title, “Ignatius Loyola, make haste to help me” and the contents. In fact the work as a whole responds to the second part, “New Perspectives on James Joyce”, stressing the European dimension of Joyce and the network of influence and intertextuality that runs through his work, essential aspects that we stated in the first lines. In this sense, the volume offers a variety of approaches and in most cases interest and originality.

In any case the Conference held in Bilbao establishes a bridge between the Irish territory and the Basque, and between the nationalist traditions the two have shared. The index reveals, however, that the contributions of the volume go far beyond what could have been a comparison of similarities or differences. The real value of this publication is that it shows the versatility and complexity of the Joycean work, just as we said in the first paragraph and presents a balanced spectrum of themes in Five parts: On the Genesis of Joyce’s Works, On Irish-Basque Literary Relations, New Comparative Approaches, New Theoretical Approaches to Joyce´s Aesthetics, On myth and religion in Joyce and, as a conclusion, An interview with Alfonso Zapico, Comic Illustrator.

A closer look at the index indicates the main parameters dealt with, firstly, the genesis of the Joycean work, a source of unlimited and inexhaustible study, where we highlight the interest of Fritz Senn’s “Random Instances of Joyce’s Handling of Time”, which is a lucid analysis of different Joycean titles. Just as valuable is the contribution of Anne MacCarthy “A Catholic Literature for Ireland: James Duffy and Duffy’s Irish CatholicMagazine”. There is no doubt that Catholicism was an essential axis in the formation of the Irish national consciousness and in the personal and artistic education of Joyce. The stated article uses the sources well and annotates a context of considerable importance for understanding not only the figure and his work, but one of the more deeply-rooted frameworks in Irish life and culture. As stated above, the volume hardly abounds in an essential vein, which is the spiritual and religious dimension of Joyce and for that it pines for more contributions addressing his most emblematic work in this sense: A Portrait of the Artist as a Young Man, a prodigious exercise in the exorcism of the great demons of Irish nationalism — language, patriotism and religion — as well as the carnal, spiritual and artistic demons of the young Dedalus. In the book a unique article on this topic stands out, Jose Mª Tejedor Cabrera’s “The Stephens-Joyce Connection”, well structured and documented.

In the second part, On Irish Basque Literary Relations, the philological rigor and depth of Francisco García Tortosa’s “Vascuence in Finnegans Wake” is highlighted. It is an invaluable study that sheds new light to decipher one of the most impenetrable works of literature and in our opinion one of the best contributions of the book. We must not forget that Finnegan’s Wake exhibits the most prodigious techniques and unsurpassed literary refinement, complemented by an amazing exercise in verbalization. This article offers unprecedented angles to decipher the oral epic “world of words” as it has been defined, that few scholars dare to confront. Following the same lines are the studies “A Lyric Weakling in the Wake” by Jefferey Simons and “The Quinet Motif and Joyce’s Memory for Finnegan’s Wake” by Ricardo Navarrete Franco. The other two contributions of the section address the system of relationships between Basque and Irish literature and the connections between the Irish writer and the Basque writer Ramón Saizarbitoria. The similarity of paths of Ireland and the Basque Country has frequently been stressed, obviating in many cases the difference in the evolution and historical context. These two contributions — Jon Kortázar’s “Relaciones intersistémicas entre la literature vasca y la literatura irlandesa, Joyce y Saizarbitoria” and  Asier Altuna’s “…and wild dwellers by Vizcáy? Ye, the unconquered remnant of the brave old celtic race”. The Basques in The Nation” — prove to be really  illuminating contributions in the field of literary interconnections. New angles are also provided in the work of Alberto Lázaro and Teresa Iribarren “Shedding Light on the Mystery of the First Catalan Ulysses: the Letters of Joyce J.F. Vidal Jové”.

In the third section, New Comparative Approaches, we highlight Mª Luz Suárez and Olga Fernández’s article “James Joyce and Pío Baroja: common sources”, affecting what we initially called the European dimension of Joyce and its extensive universal ramifications. Mention should also made of Joaquim Mallafré’s “Ulysses/Ulisses: digging for common ground”, which strikes a good balance of theory and practice.

In the fourth part Marisol Morales’s “James Joyce’s Early Writings and Ecocritical Theory. A new Turn?” and Margarita Estévez’s “Could we speak about an Eco-feminist Joyce?” represent outstanding contributions, both offering valuable insights.

The interview with artist Alfonso Zapico which closes the volume — “Making Joyce accessible to the wider public. An interview with Alfonso Zapico, Comic illustrator”, by Olga Fernández Vicente, is a stimulating way of discovering new dimensions in Joyce’s endless universe. Zapico is the author of Dublinés, the first Spanish comic based on Joyce, and a good example of how to make Joyce accessible and enjoyable for a wider readership.

We can say, in conclusion, that the volume presents some disparity between its contributions in terms of relevance. However, there is enough quality in several articles, such as those mentioned above, and the volume offers new approaches in the complex and vast task of Joycean criticism.