by Veronica Johnson. This text may be archived and redistributed both in electronic form and in hard copy, provided that the author and journal are properly cited and no fee is charged for access. 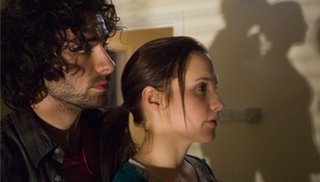 2008 saw the release of two feature films which focused on the home as a place of danger.  Given Ireland’s obsession with house-hunting and home-making over the past decade it is perhaps not surprising that cinema is beginning to reflect this aspect of our national psyche.  In A Film with Me In itthe homemaking is of a rather haphazard and impermanent nature. Rather than a house, the main couple live in a run down basement flat which they rent and are therefore marked as ‘losers’ of some sort.  In contrast the main protagonist of Alarm – Molly (Ruth Bradley) – is able to buy the home of her dreams as soon as she decides to make a fresh start.  Money is no object here, not only can she purchase her home immediately but she can happily afford to pay €5000 more to the estate agent to secure the sale and begins to decorate and furnish it immediately.  This disparity in wealth marks the protagonists in each film as occupying opposite ends of the spectrum of life in modern Ireland.  The protagonists of A Film With Me In It belong to the Dublin which was also inhabited by the characters in Once; that part of Ireland which was marginal to the wealth of the Celtic Tiger. In contrast Molly in Alarm seems to represent the excess of the Celtic Tiger mentality in all its covetous consumption.  Despite having a home with and older couple – Frank and Jess – and a large group of friends she chooses to abandon this life in order to, as she says herself “get a foot on the property ladder”.  She is a representative of the modern Irish woman: financially independent, ambitious and successful.  Yet as with the characters in A Film With Me In It, her home, her place of refuge turns into a house of horror. 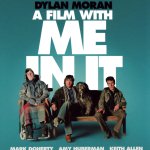 In A Film With Me In It the home is attacked by the people who live there, by the inhabitants themselves.  A series of disastrous accidents befall every living creature connected with the house, except for the two protagonists who are the involuntary instigators of each and every accident.  As a black comedy, all of these incidents are played for laughs, the humour increasing with each accident as each seems more implausible than the previous one.  By the end of the film, it can be said that we have been watching a “house of horror”, one dog, and four human beings have been killed over less than two hours of story time.

In contrast, Alarm plays on the anxiety, stress and tensions that arise when a home is no longer a sanctuary.  Here the horror begins in the protagonist’s first home, the place where she grew up.  Near the beginning of the film we watch a flashback which establishes why she is undertaking counselling and living with friends of her father.  We learn that her father was murdered during a night time robbery when he was awoken by the home alarm system.  Hence Molly’s refusal to place an alarm on her newly purchased house and the film’s title.

The death of her father leaves Molly fragile and vulnerable.  When the film opens she announces to her therapist that she wants to make a fresh start and has decided to purchase her own house away from the city in order to find peace and quiet.  Shots of gridlock and an amplified soundtrack of city traffic nicely capture the daily stress of living in a major city.  However, rather than the rural idyll that she is searching for Molly encounters problems with her new home even before she purchases it.  The morning after viewing the property she decides to buy it only to discover that someone else has got there before her.  On hearing this news she breaks down in the estate agent’s office and is only consoled when the agent illegally offers her the house for an inflated price which he will pocket.  She accepts.

Alone in her new home Molly is soon the victim of unwanted attention.  Her house is broken into and although nothing is stolen the event has a major impact on her.  All that she has been working towards since the death of her father: peace, quiet, independence, a home of her own,  has been violated by a random act.  A second break-in convinces her to purchase the initially unwanted alarm system, but this decision brings with it more difficulties, with accidental tripping of the alarm and questions as to who she can trust with the alarm code.  As each incident is unresolved Molly becomes more and more suspicious of every other character in the film.  While she and new boyfriend Mal quickly establish a loving relationship and make a home together she is unsure as to whether she can trust him and eventually begins to suspect that he might in fact be the cause of all her recent difficulties.  The home, traditionally a place of refuge, succour and safety, a place to return to has become the place which Molly wants to escape from.  Moving from the home as the centre, to the home as the place which promotes nightmares, it seems that writer/director Gerry Stembridge is reflecting on the changes brought about in Irish society as a result of the economic boom.  In showing us that most of Molly’s neighbours are rarely at home due to the long commute to and from Dublin he is commenting on the fact that while Molly’s unhappiness with her home might be an extreme case, it is certainly not unique in contemporary Ireland for homes to be abandoned, for people to be sheltering in houses rather than creating homes.

While Molly searches for tranquillity in her life and seeks to build a home for herself to replace the one she has lost, the protagonists in A Film With Me In It rarely have a moment of tranquillity and live in a world of unfolding chaos.  They are aimless, feckless and (until their talent for dealing with dead bodies comes to the fore) rather gormless too.  Dylan Moran’s Pierce is the latest cinematic version of the Irish bachelor, a man so engrossed in alcohol, gambling and the camaraderie of male friendship that his life seems unlikely to change or progress anytime soon.  Mark Doherty takes the role of Mark the homemaker, an unemployed actor who is henpecked by his girlfriend Sally (Amy Huberman) and under threat from his landlord for non payment of rent.  The flat which Mark shares with Sally and David (David O’Doherty) his disabled brother, is falling apart at the seams, the prototype dingy student flat.  In fact so run down and in need of repair is this home that many of the deaths which occur there are a result of faulty equipment, furniture or fittings.  The first to succumb is the golden Labrador whose demise occurs as a result of a badly hung bookshelf.  Next is David, thanks to a precariously connected chandelier.  Sally manages to avoid the other dangers in this house of horrors, her end coming when she slips in David’s blood and cracks her skull.  Perhaps there is a sense that the carnage will end when Jack the landlord (Keith Allen) comes to fix another potential danger spot; the light in the kitchen, but he too becomes a victim of this dangerous home.  The final victim, a Garda (Aisling O’Sullivan) who has come as a result of a neighbour’s complaint about Doherty’s trumpet playing equally fails to make it out alive.

The old Irish saying “Níl aon tinteán mar do thinteán féin”, (there’s no fireside like your own fireside), a variation of “There’s no place like home” rings true in both of these films but certainly not in the original meaning of the saying.  For the firesides in these two films are not the welcoming, homely places of domestic bliss.  There certainly is no comforting fireside for Molly in Alarm and as the film progresses it becomes clear that her intense desire to create a home for herself to replace the one that was so violently taken from her has led her further into despair rather than the security she wished for. In A Film With Me In It Pierce and Mark are the type of characters who would happily sit at any fireside.  However, even these two laid back characters eventually become overwhelmed and anxious at the level of sheer bad luck that is generated by their domicile.  The Irish home as represented by these two films then is a place of violence and mayhem, a place distinguished by terror in Alarm and ferociously black humour and violence in A Film With Me In It.  Each film centres on the living space with only rare excursions into the outside world, for the protagonists in these films everything important that happens, happens in the home.  This works to place the focus on the significance of the home and its place in modern Irish society.  Both films seem to contest the myth of security, the obsession with home ownership in Ireland offered. How right they were.