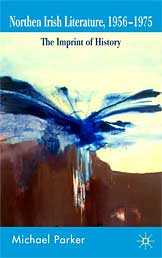 “Each gives the other’s lines a twist,” claimed Michael Longley about his fellow poets in their northern statelet who conversed and contended with each other (1: xviii).  The twists, and the contortions, of Northern Ireland entangled themselves into its intricate poetry, drama, fiction, and criticism over the past fifty years. Michael Parker straightens out their creators’ mutual connections, and tracks their deviations from each other’s lines. Parker’s narrative of the long escalation and gradual easing of the Troubles, historically analysed and politically amplified, accompanies his two-volume critique of selected literary productions from the province.

Parker, professor at the University of Central Lancashire, compiled The Hurt World (1995), an anthology of short stories about the Troubles, along with an examination of Heaney; he has co-edited essay collections, one on postcolonialism, and another on contemporary Irish fiction. His qualifications show his familiarity with an abundance of authors, famous and otherwise, worthy of inclusion. Nearly free of jargon — although “verfremdungseffekt” leaps out of a Mahon critique  —  and accessible to those outside the academy, these paired volumes were eleven years in preparation. They combine close readings — from lesser known and more familiar poets, playwrights, and short story writers, and novelists — with a detailed history of political conflicts in the province from the implementation of both British decolonisation and IRA’s Operation Harvest through the decommissioning of the IRA and the recent institution of power sharing.

Rather than endlessly reciting texts and dates, Parker analyses fewer authors. He selects representative works from men and women, unionists and nationalists. By a chronological presentation, he tallies a half-century’s responses to violence and its cessation. Exploring instability, he addresses the “twist” of “the other’s lines” drawn on paper  —  or sketched as boundaries sundered by invasion, subversion, or imposition.  Each chapter opens with an historical description, interspersed with microscopically close readings of one text.  Literary criticism, journalism (both contemporary and retrospective reports), and interviews enrich contexts within which writers respond to escalating disruptions.

Addressing Sam Thompson’s Over the Bridge, Parker reveals his strategy. First performed in 1960, this play “anticipates the apprehensiveness of many subsequent ‘Troubles’ writers over direct representations of violence” (1:7). The oblique, or detached, preference that Ronan Bennett has argued dominates many Northern Irish writers’ responses does not jibe with Parker’s alignment of those who may hesitate, but who do not beg off their engagement with the tensions that trap them alongside their neighbours. Sifting through material that has been refined by previous investigators, Parker’s careful recovery of artifacts may overwhelm a casual observer. For example, volume one lists over 1250 notes for about 260 pages of text. Maps, timelines, and bibliographies follow. Yet, Parker’s diligence reveals determination to present honestly actions blurred by revision.

Summarising NICRA’s August 1968 march takes a long paragraph. Six citations move from Communist organiser Betty Sinclair to Marxist Anthony Coughlan’s clash with NICRA back to Sinclair before quoting Gerry Fitt, Bernadette Devlin, and an historian on the IRA. In one endnote, Parker substantiates Coughlan’s claim with a paper now in Roy Johnston’s collection; Parker locates an error from a leader interviewed by historians in their Dungannon account which relied upon this reference. Parker then quotes from Johnston’s letter to him in support of his own correction.

These superscripted numbers add up to hundreds per chapter, but by this diligence Parker accumulates a comprehensive evaluation of primary and secondary sources from participants as well as commentators or critics. Furthermore, Parker remembers the telling detail. At the much-mythologised Dungannon where NICRA faced an RUC police cordon and “1500 counter-demonstrators from Paisley’s UPV,” that NICRA contingent heard Sinclair, perhaps cannily given the media’s presence, exhort two-and-a-half thousand marchers to join her in “We Shall Overcome” (1: 75). Most had never heard of it. They reverted soon to “A Nation Once Again.”

Reacting to the August 1969 riots that overcame such civil rights protests, John Hewitt struggled with what many of his peers would face: how to transfer words and thoughts from the private domain into a larger political narrative that demanded articulation? Parker recovers Hewitt’s An Ulster Reckoning (1971) along with works such as Heaney’s “The Tollund Man” or “Punishment” which cloaked Irish struggles within earlier sacrifices. Parker quotes Heaney’s self-scrutiny regarding linguistic failure to do justice to local atrocities. “Now there is of course something terrible in that, but somehow language, words didn’t live in the way I think they have to live in a poem when they were hovering over that kind of horror and pity. They became, they just became inert, strangely, for me anyway” (1: 176). Heaney’s own hesitation emerges in his stumbling account of his own contortions which would be preserved by his bog-buried victims from Iron Age Scandinavia in Wintering Out(1972) and North (1975).

Yet, Parker reminds how poets could overreach. Auschwitz cannot be compared with Belfast. The lingering gaze of Heaney over the body of the young girl condemned for her dalliance unsettles Parker. When authors succeed in capturing the difficulties of poetically conveying their responses to their provincial horror, Parker acknowledges their triumph. If they stumble, he proportionately corrects their fall.

“Punishment,” as Parker limns Heaney’s attempt to “understand the exact / and tribal, intimate revenge,” integrates Heaney’s expression of nationalist fears in the early 1970s that Catholics faced assault from both loyalists and “security forces.” Parker warns, however: “yet to comprehend the motives of others is not necessarily to endorse their actions, or to be free of one’s own conflicting allegiances” (1: 245).  The voyeurism, the lingering scrutiny, the helplessness of the aroused but impotent onlooker dramatised by Heaney, Parker explains, remains unsettling. It implicates “all those reading the poem” and reminds them of the Northern predicament, and its inextricable complexity for those witnessing the Troubles  —  as spectators.

The second volume, after the murders and attacks by 1975 appeared to have perhaps reached that infamously assessed level of “acceptable violence,” looks beyond verse and drama. As the conflict protracted, novelists and story creators entered the fray. They tended towards more nuance through sympathetic characters as flummoxed as their creators in attempting to understand what they told — perhaps to an international audience. Heaney’s success spurred Muldoon; Montague sparked Medbh McGuckian. For fiction, fewer predecessors guided. Volume one dissects no fiction; Volume two examines eight novels or stories out of thirty-four exemplary texts.

Benedict Kiely’s novella Proxopera (1977), Jennifer Johnston’s Shadows on Our Skin (1977), or Bernard MacLaverty’s Cal (1983), all of which gained an international readership, nevertheless betray how the Troubles defied complete success in narratives as well as in many staged or versified versions. Parker accurately pinpoints the failures in this trio to avoid stereotyping, simplification, caricature, or sentiment. By comparison, Parker’s enthusiastic introductions to writers left out of the canon invite readers to rescue abandoned texts. Una Woods’ The Dark Hole Days (1984), judging from his praise, deserves much more elaboration; Anne Devlin’s “Naming the Names” (1983) benefits from its shorter length, for Parker can better interpret its intricacies within the chapter’s limits allotted to early 1980’s fiction.

Such compression may prove a slight weakness inherent in any editorial construction, joining a detailed provincial history with textual analyses, within so few pages. Parker deserves not blame but praise for alerting audiences to many of the forgotten selections he recovers. With care and precision, he directs the reader towards in-depth encounters with poetics, symbolism, and dramaturgy; simultaneously he balances his examinations with wide-ranging perspectives on an immense amount of interviews in print, on television, or the radio, blended with political and social events throughout the North over five decades.

Despite his ambitious project, Parker never loses sight of the reader unfamiliar with this genre. Readers studying these two books will find fresh texts to pursue. Those familiar with politics may be less so with lesser-known poets; those expert on drama may encounter a novel previously ignored. Parker, steadily arranging a well-ordered sample of reactions to unrest, keeps his prose direct, intelligent, and respectful of the human costs involved — rather than a routine slog through statistics, acronyms, or slogans.

Muldoon’s sequence concluding Quoof (1983) sums up 1980s despair at hatred’s routine. Parker proposes “The More a Man Has, the More a Man Wants” registers “the near-complete desensitisation of a culture and a people. Its narrator’s deadpan delivery is symptomatic of this virulent condition, which at times seems to number compassion, art and meaning alongside its many individual casualties” (2: 97).

As the survey nears the millennium, the outlook brightens. A “postmodernist distrust of grand narratives” as attention shifts from an insular redoubt to global geopolitical change encourages  Northern Irish writers to examine domestic and family concerns (2: 225). National identity retreats as a preoccupation of poet, playwright, or storyteller; the Good Friday Agreement offers them and their fellow residents a chance to tick “both/and” and not “either/or.”

However, intimate dimensions of identity, Parker corrects, emerged earlier. Nick Laird’s nimble, clipped, and quirky verse captures the Northern demotic. Often warped into exaggeration or derision, Laird’s charged syntax speaks for many of his counterparts as he restores a visual, raw, and daringly compassionate delivery into figures consigned to cartoonish roles as thugs, terrorists, or tramps.  Those men assembled in To a Fault (2005), Parker reflects, exemplify “Edna Longley’s contention that ‘the speech or eloquent silence of the father’ is one of the most important, recurring motifs in Northern Irish poetry” (2: 230).  Their shared experience of enduring the Troubles, Parker continues, “intensified solidarity between generations, as well as within communities.” Today’s churches, paramilitaries, and police have all been reduced. They dominate fewer enclaves of sectarian adherents. Laird, and many of his peers, turn now away from these superstructures. They portray rather those who lived under them, within the rubble, who rebuild, resist, and revive.

Alan Gillis’ “Progress” from Somebody, Somewhere (2004) ends Parker’s second volume. Gillis shares Laird’s conversational and lyrical shifts. Gillis shapes an image that in clumsier hands “so easily might have descended into embarrassing and tasteless whimsy” (2: 238). “Progress” deserves citing in full as an expression of an aspiration Parker brings his study towards.

They say that for years Belfast was backwards
and it’s great now to see some progress.
So I guess we can look forward to taking boxes
from the earth. I guess that ambulances
will leave the dying back amidst the rubble
to be explosively healed. Given time,
one hundred thousand particles of glass
will create impossible patterns in the air
before coalescing into the clarity
of a window. Through which, a reassembled head
will look out and admire the shy young man
taking his bomb from the building and driving home.

Among younger generations of Northern poets, literature may provide — after long agony from many of its creators at its passivity amidst destructive acts —  a source of healing now in its lineaments. Parker’s coupled volumes thoroughly excavate literature from the six counties’ political ruins. Writers refill the social gaps with home-grown speech. “Progress” arranges a young Belfast poet-critic’s final “twist” of lines into a municipally healing shape, after fifty years of provincial contortion.