“Not in front of the American”: place, parochialism and linguistic play in John Michael McDonagh’s The Guard

“Not in front of the American”: place, parochialism and linguistic play in John Michael McDonagh’s The Guard 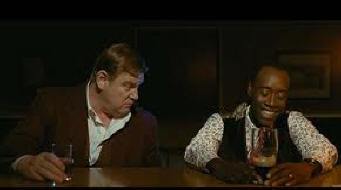 That John Michael McDonagh’s The Guard became, in 2011, the most successful independent Irish film in Irish box office history, must be a source of cheer to the beleaguered Irish Film Board. However the work itself, a Galway-set hybrid of spaghetti western and the New British and Irish gangster dramas of the 1990s and early 2000s, has been greeted in uncritical terms, with exploration of its themes and frames abandoned in favour of a naïve celebratory discourse which has privileged ‘market value’ and industry awards over textual or stylistic innovation.  While The Guard attempts to cast a fresh eye over ossified genre conventions, this film too features an unlikely protagonist – the titular Guard being Sergeant Gerry Boyle (Brendan Gleeson), a law enforcement officer in rural West Galway – who finds himself entangled with a ruthlessly amoral criminal gang amid a series of blackly comic and occasionally shockingly violent incidents, concluding in a Pyrrhic rather than conclusive climactic victory over them.  Owing more to the theatricality of Synge than it does to any cinematic antecedents, despite its sub-Tarantinian litany of cultural references, it is primarily the intensity of its desire for an extreme ‘localisation’ of the genre that marks it out.

Parochialism is a key characteristic of The Guard. Ireland here appears as some kindred of the American West, complete with bar brawls and blunderbusses, but defined also by the sort of whimsical eccentricity that has dominated representations of Ireland since before The Quiet Man. Characters – although safely ‘rooted’ in the contemporary by clunky references to lattes and cappuccinos – are defined explicitly and obsessively in relation to what seems a distinctly pre-modern and xenophobic emphasis on locale.  All are defined through their presumed geographic origins or genealogy, whether a suspect incensed at being called “a fucking Italian”, a murdered Garda’s widow mistaken for a Romanian (on finding she is Croatian, the solemn endorsement of “Good footballers, the Croatians” is bestowed), or via repeated references by the drug traffickers that Boyle and his beleaguered American counterpart FBI Agent Wendell Everett (Don Cheadle) are hunting, to “the fucking English”. 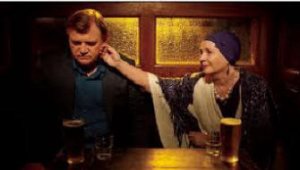 These last are double-coded to leave space for a critical reading of the Irish as unpleasantly obsessed with their own oppression – we are told, “That’s the trouble with the Irish…they never forget” – but the point lacks interrogative sharpness, its ultimate expression coming when an IRA operative states, harking back to the era of Kim Philby and associates, that gay agents were “the only way we could successfully infiltrate the MI5”, simultaneously pejoratively linking associations of Englishness and homosexuality, and seeming to claim a kind of quasi-progressive status for the IRA and by extension the Irish.  This winking feint-and-parry style is employed throughout, with McDonagh approaching each tendentious point close enough to deliver an obvious gag without exploring further. The result is acutely self-conscious, the film weighed down by non-sequiturs as it progresses towards its Mexican stand-off conclusion.

The film reserves a special place for “the Dubs”, producing a mixture of straightforward comic insults (“fuck off back to Dublin”; the insinuation that an STD is the only logical outcome of sex with Dublin women), and a more complex challenging of presumed metropolitan attitudes to Boyle’s “lowly country nobody”, a phrase misheard by ill-fated new partner McBride (Rory Keenan) as “lonely country nobody”.  Hints of a more subtle take on the urban-rural divide emerge, but the overall picture is of a – successful, if perhaps cynical – attempt to co-opt rural audiences into accomplices, positioning them as members of a counter-movement to the dominance of images of the capital in contemporary Irish cinema. However, this appeal to localism frequently swings into an intensely venial parochialism that, paradoxically, has a simultaneous wide common appeal; the film’s international success indicates that the categorisations on offer could as easily be transported to Swindon or Cleveland and be as relevant, and as negative, as they are here.

Local knowledge is repeatedly emphasized as superior to any other, with Boyle’s access trumping Everett’s by-the-book investigation, and insularity presented as a quality intrinsic to the Irish, and as a legitimised source of pride, as we see Everett canvassing uninterested GAA fans and being ejected for not being from a ‘glamorous’ enough division of the FBI.  One set-piece revolves around a family of Gaelgóirí who refuse to respond to him in English, protesting that “this is Ireland.  Go over to England if you want to speak English”.  Here, the complex realities of Irish-language debates are ignored in favour of a momentary symbolic resistance to the supposed encroachment of English-language culture that only serves to emphasise McDonagh’s distance from and lack of engagement with the ‘real’ Ireland.

It is America that seems to loom just offshore in this imagined Ireland; not so much the ‘land of opportunity’ of a few generations ago, as the bedrock of a seam of running pop-culture references and jokes. These encompass the mocking of the phrases ‘John Doe’ and “putting out an APB”, multiple police procedural show references, a slang comment greeted with “He thinks he’s in fucking Detroit”, and Boyle’s bonding with Everett over the mention of Tupelo, Mississippi – birthplace of Elvis, but also Everett’s wife’s home town, calling to mind the traditional Irish practice of ‘tracing’ parish origins.  They also serve to highlight the debt that The Guard owes to Tarantino and his imitators, as evinced by a scene in which gang leader Francis Sheehy-Skeffington (presumably a tricksy reference to the Irish suffragist and pacifist of the same name) asks the question “what did they throw off the Tallahatchie Bridge?” Here, American pop culture is more at issue than anything distinctively Irish, and Boyle’s function seems designed to appeal to presumed insecurities: a surrogate who ‘gets one over’ not on our old colonial masters, but our new ones, the Americans, this mastery-through-bonding complicated through Everett’s positioning as an African-American.

Distinctive, too, is the way in which The Guard uses transgression, and specifically transgressive language play, as a source of humour. Provocation is emphasised, with references to bestiality, a paraplegic described as a ‘spastic’, and Boyle mockingly asking McBride if he has “interfered” with a corpse before.  The references are complicated by their framing not just as specific comedic devices, but as attacks on assumptions Boyle appears to believe others (Dubliners, Americans) make about the rural Irish.  However, these assumptions are not borne out by characters’ behaviour, which makes his pre-emptive attacks on what might be termed “PC attitudes” unwarrantedly bitter and gratuitous; in emphasising supposed Dublin-rural and Irish-American value contrasts, and privileging an atavistic interpretation of Irish attitudes – “Ah would you fuck off to America with your ‘appropriate’” – the film valorises humourless hectoring over genuine verbal dexterity.

It is the disingenuousness of this stance that strikes a disquieting tone.  Boyle is positioned as a man whose motivation is to ‘tell it like he sees it’, whether admiring the “enterprise” of Colombian drug exporters, professing that babies look the same unless they are exceptionally ugly, or cheerfully recounting his drug use to Everett, and it is his use of language as a weapon – in a distinctly theatrical, not cinematic, fashion – that rings loudest.  Through Boyle, McDonagh may attempt to recuperate the ‘village idiot’ of The Quiet Man or Ryan’s Daughter, but the ferocity of his verbal attacks are not diminished by his “Would you lighten up, for fuck’s sake”, the bully’s disclaimer of “I’m only having a bit of fun, like.”  Boyle may ‘tell it like he sees it’ but this is at the expense of other, more vulnerable characters.

The prostitutes he gleefully patronises, dressed in parody uniform, are simpering ‘happy hooker’ ciphers, and Boyle is ignorant of his responsibility for the beating one of them receives. When she states “there are no nice fellas” he replies “I wouldn’t be too sure about that now”, denying his complicity in her sexual servitude, reducing their transaction to a simple free-market exchange.  When Boyle publicly declares “I thought only black lads were drug dealers. And Mexicans” and is censured by the corrupt, dimwitted Inspector Stanton, he retorts “Apologise for what?…I’m Irish, shur, racism is part of my culture” he is on the brink of positing a challenging thesis about contemporary Ireland. McDonagh discards the opportunity, however, the situation merely a set-up to highlight Boyle’s anti-establishment credentials, rather than an attempt to explore the film’s – or Ireland’s – leanings towards xenophobia.

While The Guard sells itself as a no-holds-barred comedy, it notably has a sudden attack of conscience when Boyle upbraids IRA man Hennessey (Pat Shortt) on the ethics of combat, saying “It’s not as if you lads were ever that keen on getting in close for a scrap now, was it? Blowing up Australians by mistake from a distance was more your modus operandi.”  Given McDonagh’s cheerful skewering of ‘spastics’, prostitutes and ‘Romanians’, and references to the FBI being “more used to shooting at unarmed women and children” this reflects a degree of post-ceasefire delicacy that could be regarded as creatively craven, or born of the necessity to cultivate Britain as a marketplace.  Hennessey may be a cheerfully bucolic ‘cute hoor’, but the film represents republicanism and the IRA through a ferociously conventional framework of moral unacceptability.

It is the verbal ritual of ‘slagging’ which dominates The Guard, as Boyle’s bonding with Everett reveals.  From questions about growing up in “the projects” to noting “I thought black people couldn’t ski”, language functions primarily as display, or masculine challenge given and accepted.  Boyle’s racist play with words forms a paradoxical bonding activity; male friendship solidified by the kind of verbal abuse that, we are to infer, only a ‘real’ Irishman can deliver. Mastery of language, it implies, is mastery of all, whether used as much to hide as it is to reveal, as in the case of the tight-lipped locals Everett compares to the residents of Compton as “not too keen on talking to the law”, or to display status and exert control, as with the verbose drug traffickers who exchange favourite philosophers’ aphorisms, decry Americanisms, and argue over correct clinical definitions of the words ‘sociopath’ and ‘psychopath’.

The film’s broad call to cultural knowledge and status – the references to Chet Baker and Russian literature as well as philosophy – is worn heavily and while McDonagh may be championing a culturally sophisticated image of Ireland, it feels like a more cynical exploitation of literary and intellectual heritage, designed to substitute scattershot references for anything deeper.  However, in many cases this is masked by Gleeson’s fine work in humanising an inconsistently-written and often gratingly charmless character.

Unfortunately McDonagh lacks the imaginative edge and visual daring that would elevate The Guardbeyond its overly-wordy sophistry. Despite some entertaining comedic moments, an often nuanced approach to the rhetorical discourse of the drugs trade and law-enforcement, and a sensitively observed mother-son relationship, the gangster tropes employed here are too tired to be easily resuscitated, and McDonagh opts for irreverence over real intensity.  In the end, aside from the interesting implication that Ireland is so corrupt it must be escaped from, no trace left behind, it is Boyle’s combination of winking whimsy and swaggering contrarianism that prevails, a vision of Irish manhood that panders to parochialism while claiming the virtues of subversive individualism.