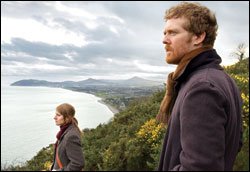 It is now eleven years since John Carney came to the attention of Irish cinema audiences with his fresh and fiercely independent debut, November Afternoon(1995). It was the early years of the re-established Irish Film Board (1993); but the video stock, cast and crew cost virtually nothing with the Film Board providing financed for post-production and prints. Written and directed in collaboration with Tom Hall, the duo followed this atmospheric and uncomfortable tale of incest in the city with Just in Time; a similarly unvarnished exploration of sexuality in modern Ireland. It is fair to attribute to these films the overused appellation of ‘groundbreaking’ both in their stylistic immediacy and thematic daring.

A search for John Carney on Google and will produce more hits relating to American independent maverick John Cassavetes, thanks to the prolificacy of his Boswell, Ray Carney. The accident is a happy one since it is hard to find precedents for John Carney’s ambition in Irish cinema or literature. His sources of inspiration include the Cassavetes school of character-driven, low-budget, intense and complex narratives of often superficially conventional characters with swirling depths of desperate longing and confused identities. He is, above all, a resolutely modern film-maker; his stories concerned with private emotions rather than public morals. He is also utterly urban in focus and disposition and more particularly, takes inspiration from his native Dublin. His films and television work –notably Bachelors Walk1 – glide through a city of familiar pubs, streets and settings, often eschewing the shine and surface of ‘new’ Dublin, in favour of locations related to the 1980s declaring a sensibility at once contemporary and out-of-place.

After the critical success of his first co-written and co-directed features, Carney went solo in 2001, directing On the Edge, produced by Jim Sheridan’s Hell’s Kitchen in association with Universal Pictures. This represented a substantial step forward in terms of profile and budget and his cast off teenage oddballs included Cillian Murphy and the American actress Tricia Vessy. Clearly aimed at the American ‘indie’ market’s taste for good-looking misfits and loners –who may or may not be mentally unstable– the film disappointed both critically and commercially. Though it featured his characteristic preoccupation with the difficulty of emotional contact, On the Edge –in ironic defiance of its title– seemed less convincing than the earlier, more immediate and less polished films.

More than one critic has noticed Carney’s debt to Eric Rohmer and the French nouvelle vague – it’s a comparison difficult to avoid in his choice of black and white photography and the jazz soundtrack in November Afternoon. It’s an influence felt once again in Carney’s fourth and most recent feature, Once (2006), which sees him once again employing the mobile ‘flaneur’ camera of the early work, in a delicate story of heterosexual yearning. The film is structured as a series of songs strung across a fine thread of frustrated attraction. It is quite unlike anything seen in Irish cinema before; yet its themes, use of location, technique and use of music make it unmistakably ‘Carneyesque’.

Once details the unfolding relationship between a busker (Glen Hansard) and an eastern European immigrant (Czech musician, Marketa Irglova) over a couple of weeks in and around Dublin city centre. Hansard will be familiar to audiences as ‘Outspan’ from The Commitments – the first, hugely successful, adaptation of a Roddy Doyle novel. He is better known these days as the charismatic front-man of Dublin band The Frames –of which Carney was originally a member– and as a highly respected musician. He has written music for an earlier Carney project and suggested Irglova as ideal for the role of the girl in the film, following a recent musical collaboration2 . Hansard’s character –referred to in the credits simply as ‘the guy’, is in the wake of a break-up with his girlfriend who has moved to London. Irglova’s ‘the girl’ is one of Ireland’s new immigrants and lives alongside similar ‘new Irish’, sharing a flat with her mother and young daughter Ivana in a run-down part of the inner city. She encounters Hansard singing on Grafton Street one evening as she is selling the homeless magazine ‘Big Issue’, and they develop a relationship based around songs which at first gives voice to his heartbreak and bitterness, giving way to his attraction to her and her gentle but stoical rejection of his advances.

There is something wilfully anachronistic about the way Carney uses Dublin; a curious mixture of topicality inflected with a very particular affection for a city now experienced rarely, if at all. Walking down Grafton Street recently I saw an eastern European man playing energetic Abba on an accordion as he danced and sang in an incredibly powerful, heavily accented, voice . . . ‘Oh Chiquita, you and I know, that the heart aches come and they go . .’ Once has Hansard –at one time a Grafton Street regular– meet the feisty and forward foreign girl and bring her back to his Da’s small vacuum cleaner repair-shop before inviting her up to his bedroom to listen to cassette tapes of his music. Cassette tapes! What kind of musicians would even know where to find a tape-recorder today; never mind the Jimi Hendrix poster which line the walls of this 30 something singer-songwriter. His Da –wonderfully played by Bill Hodnett  is but one of a gallery of small parts in the film played by ‘real ould Dubs’ in public places; in a music shop, on the bus, selling second-hand suits. And though Carney does nothing to hide or obscure the recent building bonanza around the capital we find ourselves in locations well-known to the denizens of an older Dublin; Simon’s Place café, Grogan’s Pub, the George’s Street Arcade, McCullough Piggot’s. Not a mobile phone, iPod or panini in sight. There’s even a late night dinner party which turns into a music session straight out of Dead as Doornails – Anthony Cronin’s account of 1950’s literary Dublin. Among the performers, Dubliners of a certain vintage will recognise Pete Short, the long-time seller of In Dublin magazine outside Bewley’s of Grafton Street. And though Sean O’Casey’s Mountjoy Square tenements are now inhabited by immigrants like ‘the girl’; they are presented as the contemporary equivalent of O’Casey’s decent, working class characters. This is brought home in one amusing scene where three foreign lads from next door walk into ‘the girl’s’ flat unannounced, to watch the soap-opera ‘Fair City’. ‘Fair City is brilliant,’ they say . . . ‘we learn English from Fair City’. The girls are still pretty, even if they’re from the Czech Republic.

Once is effortlessly charming and affective. This is down to the charisma and depth of Hansard’s generous and open performance, the easy chemistry between him and Irglova, the melancholic appeal of the music and a script and direction which displays a lightness of touch that comes with confidence of vision. That vision, as we’ve suggested, is naturalistic without being realist. The central romance is credible because of ‘the guy’s’ vulnerability and attraction and ‘the girls’ inability to respond because of her circumstances. The prospect of romantic love offers the opportunity for self-reinvention as musical expression; singing away the pain of the past and sharing harmonies of the heart. Melodrama in its purest form. There are few more engaging stories than frustrated romance between good people. But Carney’s romance extends beyond emotions to include a vision of modern Ireland inspired by a rose-tinted view of the past. Dublin is a place where no one has much money but everyone gets by and shares what they have. The ‘locals’ and the immigrants are basically the same, living classless, communal lives with open doors and shared resources. It’s not quite Amelie –there is no element of pastiche or nostalgia– but neither is it Ken Loach. In its primacy of matters of the heart as the grounding narrative, this is Irish cinema with a French accent, a republic of emotions. But this foregrounding of people over place does not ultimately endure. The couple’s crossing of cultural boundaries –a refreshing representation which has not been sufficiently explored in contemporary Irish cinema– is ultimately a digression rather than a re-orientation as they return to the claims of their cultures’ pasts and emotional pairings which reinforce rather than breakdown the divide between the Ireland of 20 years ago and today’s multicultural city-dwellers. Working in an entirely different cinematic idiom of the celebrated duo of Irish-International cinema –Jordan and Sheridan– John Carney is building an idiosyncratic and resolutely personal body of work that offers confidence and inspiration to aspiring Irish cineastes; an impression reinforced by the recent success of Once at the Sundance Film Festival.