Every Plot has a Story. One Million Dubliners (Aoife Kelleher 2014)

Every Plot has a Story. One Million Dubliners (Aoife Kelleher 2014) 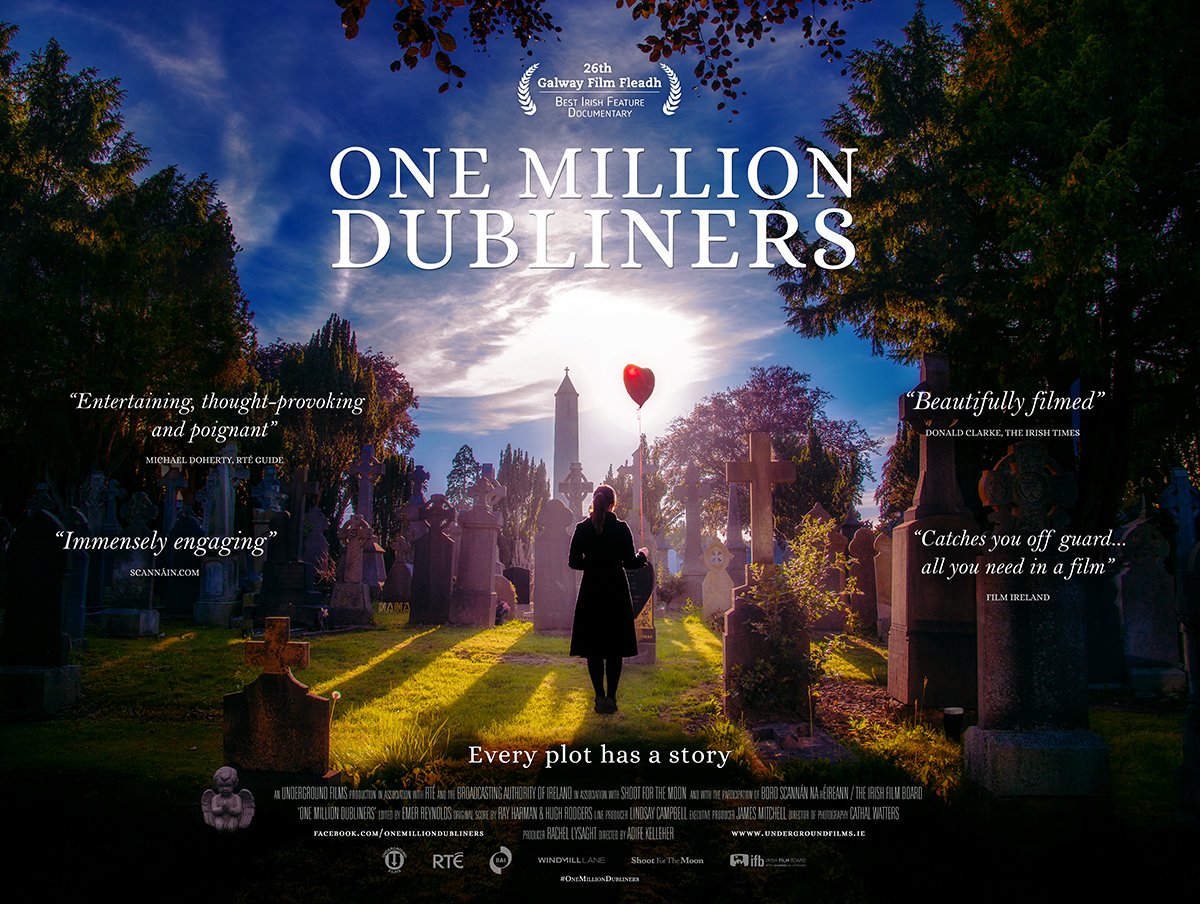 The success story that was One Million Dubliners raises a number of interesting issues around the appeal of indigenous productions to Irish viewers. As elsewhere, documentary has enjoyed a considerable revival in Ireland, now regularly claiming a place on cinema screens and in awards ceremonies. Other recent examples include Broken Song (Claire Dix 2013), Pyjama Girls (Maya Derrington 2010) and The Pipe (Risteard O’Domhnaill 2010). One Million Dubliners is thematically the least radical of these but was certainly the most widely viewed. It received a theatrical release at the Irish Film Institute (IFI), where the original week’s run was extended to two weeks and included a number of additional screenings. One Million Dubliners sold 1,961 seats, which translates to a gross of €12, 972 (O’Flynn 2015). RTÉ was quick to realise the documentary’s potential and ran advertising for the screening while the film was still playing theatrically. (It closed within 48 hours of the television broadcast, a situation that has traditionally been regarded as box-office death but here proved otherwise.) The television screening reached 254,000 viewers or 27.21% audience share at its high point, with people actively seeking it out as a consequence of the Twitter campaign (Lysaght). Both Sunniva O’Flynn at the IFI and Rachel Lysaght at Underground Films emphasise the importance of social media to the film’s success (O’Flynn 2015; Lysaght 2015).It was also notable for being distributed by the producers, and thus able to access funding under the Irish Film Board’s “Direct Distribution” scheme (Irish Film Board).

Canny marketing, however, still is no guarantee of success and we need to look further to understand why audiences so warmly embraced a film about a burial ground and crematorium. The topic of the documentary is Dublin’s Glasnevin cemetery and much of it is seen through the eyes of its resident historian, Shane Mac Thomáis. One Million Dubliners opens with preparations for a funeral and segues swiftly to the dawn arrival of a coach load of American tourists who have just been picked up from Dublin airport. It closes with the burial of Mac Thomáis, an unexpected revelation that may come as a shock to the viewer and which belatedly explains the identity of the coffin at the opening.

One Million Dubliners was the joint winner of the “Best Irish Feature Documentary” at the 2014 Galway Film Fleadh and was voted “Best Irish Film” in an on-line competition held by the Irish Times’ entertainment supplement “The Ticket” in December 2014. In interview, its director, Aoife Kelleher, has said of it that: “The themes are universal, but I do think that there’s something very, very Irish about the tone. There’s a quirkiness and a certain way of looking at life and death that’s very Irish. I’d love to see it travel, but for me, the most important audience is an Irish one. That’s who it was made for, really” (Murphy 2014).

Kelleher’s film, as she suggests, integrates into its diegesis and aesthetic certain common representational signifiers of Irishness. Perhaps surprisingly, the fabled Irish attitude to death is the least obvious of them. The rituals of the wake and the practice of “open coffin” have become increasingly anachronistic, particularly among younger people and in urban areas. Cemeteries the world over are now highly visited, and no evidence exists to suggest that Glasnevin’s visitor rate is exceptional. In keeping with changes in attitude to religious practices and beliefs, the interviewees express a range of opinions about their own wishes as to the disposal of their bodies and to whether or not they anticipate moving on to an afterlife. Some hold on to conventional religious beliefs, others voice quite opposite opinions. In one sequence, Derek O’Brien, a wheelchair user, visits the grave of singer Luke Kelly and, with complete sincerity, explains how he looks forward to meeting Kelly in the next world. Yet, viewers are neither nudged towards sentimentality in their response to these interviews nor treated to a vision of a culture that shares common attitudes to death. Much more so, Irish society is shown as modern and plural, indistinguishable in this respect from many other Western societies.

In other ways, however, the Irishness of One Million Dubliners permeates its narrative. On a simple content level,  its showcasing of the tombs of Michael Collins, Daniel O’Connell, Brendan Behan, Maud Gonne McBride and Countess Markievicz and those of other public figures positions the cemetery as a repository of Irish history. At the same time, its inclusion of “ordinary people”, such as the young woman who comes to pay her respects to the grave of her mother, recognises that Irish history is not just a narrative of charismatic leaders and bucolic artists, but of others whose names will be unknown to the wider population. A space within the cemetery dedicated to unbaptised infants, the Holy Angels plot, invokes another history, of the discovery of mass unmarked graves across the country. In conventional Catholic teaching, such infants could not be buried on hallowed ground as they were still in a state of original sin. Thus, they resided in limbo, caught between heaven and hell. Glasnevin’s own part in this tradition offers something of a comfort, however, in that it did lay aside an area for these burials, attenuating the national narrative of shame with a small note of compassion.

Glasnevin here is, in Mikhail Bakhtin’s terms, a chronotope, where time and space are linked, “a piece of human history, historical time condensed into space” (Bakhtin 1986: 49). History/histories flow through the cemetery, defining it both temporally and spatially. Other histories are also evoked in the documentary, notably via Shane Mac Thomáis’ voice-over. Mac Thomáis’ father, as he mentions, was the Republican, Éamonn Mac Thomáis, a historian, editor, broadcaster and well-known figure in Irish public life until his death and burial in Glasnevin in 2002. Mac Thomáis is at once tour guide and raconteur. As the film’s tagline promises, “Every Plot Has a Story” and most of these are told by him. Always nattily dressed, his populist recounting of the tales surrounding the many burials and crypts dispenses with the elitism of conventional scholarly history. He jokes with schoolchildren and jollies along the cold, jet-lagged American tourists. The revelation of his untimely death at the end of the film is thus a shock, a sudden merging of historical time and real time, a reminder of ordinary loss. Yet, it is also toned down – an editorial decision omits the information that Mac Thomáis committed suicide in the cemetery.

Doreen Massey has written of the need to recognise space as dynamic and unbordered, as articulating social relations:

which necessarily have a spatial form in their interactions with one another. If this notion is accepted, then one way of thinking about place is as particular moments in such intersecting social relations, nets of which have over time been constructed, laid down, interacted with one another, decayed and renewed. Some of these relations will be, as it were, contained within the place; others will stretch beyond it, tying any particular locality into wider relations and processes in which other places are implicated too (Massey 1994: 120).

Written before the now widely understood concept of the networked society, Massey’s words anticipate how audiences productively employ social media to create their own linkages to cinematic narratives. Here, the cemetery’s space was to become claimed and reclaimed by viewers who went on-line in their droves to tell their own stories of loved ones buried in Glasnevin.

The camerawork, too, has an unboundedness that would appeal to Massey’s vision of place. An early overhead camera movement (shot with a drone) glides over the graves, opening up the area rather than closing it down. The title, One Million Dubliners, further endows the space with connotations of community, the slightly old-fashioned use of “Dubliners” suggesting a lineage that is at once diffuse and specific. Indeed, it offers a belongingness after death that many may not experience in their current earthly existences. One Million Dubliners played against the backdrop of headline news of homelessness and at a time when many of Ireland’s inhabitants were expressing intense feelings of alienation from national government.

Another, highly engaging, segment concerns the “mysterious French lady” who comes to visit the tomb of Michael Collins. Accompanied by her friend Phuong Tran ThiBinh, she explains to camera why she loves “Michael”, whose story she came across after viewing Neil Jordan’s Michael Collins (1996). Her assumption of familiarity aligns her with the dynamics of fandom and its promise of intimacy with a stranger. This is, however, a particularly postmodern fandom in that Véronique’s only experience of the object of her love is the filmic construction of that historical person. As one of the florists explains, “A lot of foreign people fell in love with him [Collins] from the movie”. If the reference to Irish cinema is concrete in this sense, in another it is evocative of a long tradition of representation. Véronique assumes the role of the foreign, often eccentric “other” who frames Irish history and identity through a discourse of exoticism. However, just as much as her gaze calls the indigenous Irish into being, so the film offers a contrapuntal gaze, as the Irish look back. Of the various looks of the film, the most obvious counterpoint to Véronique’s is that of the florists, Claire Hickey and Catherine Kearns, who run the shop at Glasnevin’s entrance. They have a proprietary positioning within the play of looking and utterance that invites the local viewer to align themselves with them and thus to look back as knowing insiders.

To conclude, One Million Dubliners’ appeal can be ascribed to its careful interweaving of tropes of the Irish past into a present that acknowledges and offers consolation for multiple passings. Where its conservatism becomes evident is in its unwillingness to consider how the cemetery will adapt to Irish identity patterns in the future. The film does not raise the question as to how successfully it will integrate, or, even, has integrated, Muslim and other non-Christian believers into its promise of belonging.

Another of its consoling narratives is self-sufficiency. In the documentary, Shane Mac Thomáis explains the financial imperatives that lay behind the policy of persuading the next of kin of famous figures to consider Glasnevin as the final resting place of their loved ones, while Philip Ryan, Grounds and Facilities Manager, talks of how dwindling government subsidies forced management to embrace commercialisation. Despite this imposition of neo-liberal policy-making, everyone is coping.

To label One Million Dubliners conservative is not a critique so much as an observation. In many respects, such as Ray Harman and Hugh Rodgers’ light-touch score with its mix of the elegiac and the contemporary, Kelleher’s film shows itself willing to break with convention (another director might well have taken the easy option of choral accompaniment). Rather more, it is a film that offers its audiences a space of their own to contemplate loss.