by José Lanters. This text may be archived and redistributed both in electronic form and in hard copy, provided that the author and journal are properly cited and no fee is charged for access. 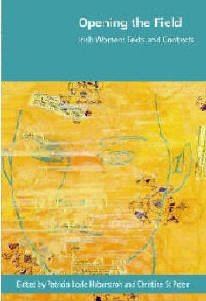 Two defining moments in late twentieth-century Irish publishing history serve as springboards for the ten essays in this excellent collection: the publication of Eavan Boland’s 1989 pamphlet A Kind of Scar, and the 1991 launch of the first three volumes of the Field Day Anthology of Irish Writing. The former articulated the necessity for women to move from being the objects of poems by male writers to becoming the creators of their own representations, while the all-male editorial team of the latter notoriously underscored the urgency of the problem by largely excluding women writers, necessitating the addition of two subsequent volumes to correct the ‘oversight.’ Since then, developments within feminism and women’s studies both in Ireland and internationally have moved the debate far beyond the issues of nation and gender raised by the Field Day controversy, and have pushed traditional binary thinking about (Irish) identity towards notions of greater multiplicity that also take into consideration class, ethnicity, etc., from different theoretical perspectives.

The purpose of the editors of  Opening the Field was to illustrate this variety of approaches within the complexity of the feminist debate. The book’s title suggests both this broadening of theoretical diversity (the contributing approaches encompass psychoanalysis, lesbian studies, queer theory, materialist feminism, postmodernism, postcolonialism, and body theory), and the unearthing and reassessment of work by previously ignored women writers.

The contributors to the volume were asked to explain the value of their chosen approach and to apply it to a text of their choice. Fittingly, given the centrality of the Field Day debacle, Gerardine Meaney’s opening essay addresses her involvement in editing volumes 4 and 5 of the anthology, with emphasis on questions surrounding canon formation and change and the necessity for generating new critical paradigms. Like several of the other contributors, she begins with a personal note by sketching the scene at UCD in the early 1980s, where literature by predominantly male writers was taught by predominantly male lecturers to predominantly male graduate students. For Meaney, the discovery of French feminist theory opened an avenue to function within and against this academic structure, but also led her to recognize the need to focus the theoretical perspective according to the particularities of Irish history, and to interrogate the ways in which national Irish identity has traditionally been gendered.

The two essays that immediately follow Meaney’s suggest that nineteenth-century women writers were, in their own way, questioning expectations of gender in literature and society. Eiléan Ní Chuilleanáin argues that Maria Edgeworth’s Ormond consciously echoes and challenges novels by her English predecessors Fielding and Richardson in dealing with themes of masculinity and patriarchy. By altering the standard plot surrounding the male hero in subtle but significant ways, Edgeworth situates Ormond within a dialogue between male and female novelists about the purpose of novel reading and writing. Heidi Hansson’s article on Harriet Martin’s Canvassing (1832) both recovers this once popular novel and reads it from the perspective of “locational feminism” as negotiating the specific expectations placed on women by place and time. Depicting femininity as performance, Martin exposes both Irish election practices and the marriage market as equally corrupt systems, thereby making her own act of writing a form of «canvassing.»

Patricia Coughlan’s article on Peig Sayers’ autobiographies, and Katherine O’Donnell’s queer reading of Kate O’Brien’s Mary Lavelle (in which, interestingly, she takes Coughlan to task for her 1993 feminist critique of O’Brien’s novel) recover their subjects from previous, less favourable criticism. Coughlan argues against masculinist readings of Sayers that deny her full authorship and question her artistry, not only through careful assessment of the material, but by addressing and exposing traditional male-oriented expectations about genre and gender. She sees the debate about who ‘owns’ Peig and what she ‘means’ as a reflection of the roles women are/not allowed to occupy in Ireland. O’Donnell’s argument shows that feminist readings of texts can have a heterosexist or heterocentrist bias, and focuses on the need to include lesbian and queer perspectives within feminist analysis.

The remaining articles of the collection focus on contemporary women artists. Cathy Leeney’s approach to Marina Carr’s play Portia Coughlan foregrounds the importance of physical performance within neorealist drama, and suggests that Carr’s manipulation of expectations about realist forms of theatre opens up a space for an examination of Portia’s pain – which Leeney reads as an articulation of the female rage of the nation – and pushes audiences towards their own act of interrogation and imagination. In her essay on contemporary interpretations of the sheela-na-gig figure by female poets and visual artists, Luz Mar González-Arias suggests the image is used to represent the embodied, speaking subject evoked by Boland in A Kind of Scar: a powerful sexual body that opens her lips in more ways than one. Rebecca Pelan addresses the particular way Northern Irish women have been trapped – more so even than their Southern counterparts – by the binary identity markers generated by the ‘Troubles,’ and makes the case that Northern women poets in particular have used gender as a ‘third position’ from which to interrogate existing divisions in Northern Irish society.

The collection’s concluding essays consider two different novels by Mary Morrissy. Ann Owens Weekes reads Mother of Pearl, published in 1996 but set in the 1950s, as a fable that warns against the dangers of denying women’s history and unquestioningly accepting gendered myths. Weekes sees the narrative as a presentation of the reality of mothering rather than the fiction of maternal desire, and hence as ultimately empowering. Anne Fogarty reflects her discussion of The Pretenderthrough the ethical and aesthetic dilemmas that arise in the wake of woman’s shift from object to subject,  pace Boland’s pamphlet: how may the female self be adequately portrayed? She shows Morrissy’s postmodernist fictionalization of the life of the Polish woman who claimed to be Anastasia, the youngest Romanov daughter, to be driven by a quest for a narrativity that can both expose and question the ways women’s lives are shaped, and an art that can override history and supplement its omissions and suppressions.

At the end of each essay, the contributors offer information about the biographical and critical contexts of each author. These sections are brief and often repeat material already introduced in the body of the essay, or else exclude artists who are not the article’s primary focus: the entry at the end of the sheela-na-gig article, for instance, focuses on Susan Connolly to the exclusion of Carmel Benson, whose painting ‘Crouching Sheela’ is used as an illustration, while the entry concluding Pelan’s essay features Ruth Carr, the editor of the Word of Mouth Anthology, but does not mention Medbh McGuckian, among others, whose poetry is also discussed. What was probably meant as an additional means of highlighting and discovering thus becomes itself a selective exercise. That said, Opening the Field is a strong collection that does important work in showing the extent to which ‘the field’ has already been opened in fruitful ways, and pointing to places where the plough still has to go.