by María José Carrillo-Linares. This text may be archived and redistributed both in electronic form and in hard copy, provided that the author and journal are properly cited and no fee is charged for access. 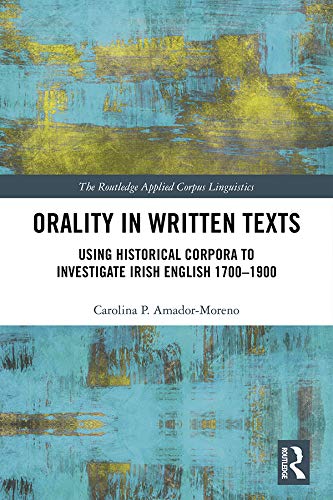 Any comprehensive study of a language requires deep insight into its structure and the paths and turns that the language has taken and which have conditioned the output we come across, both in its present state or in any, remains from the past. Far from being monolithic, a language owes its plurality among other factors to social contexts, regional boundaries, time, political constraints, and individual speakers along its history. Thus, the history of a language is the history of its varieties and subvarieties: a massive jigsaw puzzle where most of the pieces are missing and the extant ones are not always neat and clear. An attempt to reconstruct the past is essential in order to achieve a better understanding of the present, and the best historical linguists can do is to contribute by bringing out some of these extant pieces and shedding some light on them.

Orality in Written Texts. Using Historical Corpora to Investigate Irish English 1700-1900 is such a scholarly contribution, through which the oral language, one of the biggest gaps in the historical puzzle, can be dimly lit. This study is a snap shot that contributes to make up the incomplete picture. The general approach of the book shares some of the principles of micro-history, making everyday common events, such as private letters, the object of study. In doing so, the author, like micro-historians, holds a microscope rather than a telescope in her hands, bringing together elements of social, cultural and language history. Again, as in micro-history, the ultimate aim is to look for the answers to greater historical questions. In this work the author’s contributes with some new pieces to the English language puzzle.

Corpus Linguistics is the methodological framework for the analysis, and it is mainly carried out using “A Corpus of Irish English Correspondence” (CORIECOR), currently being compiled by Carolina Amador-Moreno and Kevin McCafferty. The corpus consists of emigrant letters, mostly of a Northern Irish origin, from c. 1800 to 1900. The data extracted from this corpus are compared to those extracted from other corpora such as “The Corpus of Late Modern English Texts” (for British English) or the “Corpus of Modern Scottish Writing” (for Scottish English) among others. The focus of the study resides in structures that portray an oral component in the linguistic output of Irish emigrants in Canada, USA, Australia, New Zealand, Argentina and UK, and some of their relatives and friends in Ireland.

The book is divided into seven sections, three of which treat the theoretical approach to the subject, three more, the corpus analysis, and the last one is a three-page section of concluding remarks. The introductory chapter sets the context for the analysis that will be carried out in the second part of the book. Here, the general aim of this study is established: to explore how written correspondence can provide evidence of how oral Irish English was used in the past and how speech-like features can be recorded in these writings. The analysis carried out is justified by an extensive and thorough theoretical background. The main focus falls on historical sociolinguistics, historical pragmatics, letter writing, and their application and processing through corpus linguistics.

The second chapter deals with other areas which are essential to carry out any socio-linguistic analysis: the historical context in which the letters were written is scrutinised and issues about Irish migration and its relation to education and literacy are discussed. Likewise, as another element of the matrix, the author addresses in this block the linguistic situation of Ireland and the relation of Irish English with Irish, its Celtic neighbour.

Chapter three focuses on assessing the role of letters for research into the history of a language as a complement of other more traditional research sources. The letters studied allow access to the private lives of ordinary people. They combine formulaic language with different degrees of formality or even informal language, thus portraying a wide scope of registers and in this case the social life of Irish letter writers. The author rightly claims that even if letters are not speech they provide useful information about communicative habits or changes in styles.

The next block of chapters moves onto the analysis of certain “oral” linguistic features in the corpora. Chapter four tackles specific issues such as “Discourse-pragmatic markers”. Examples retrieved from the corpus are discussed. The markers analysed are “so”, “anyhow”, “anyway”, “like”, “sure”. The corpus analysis seems to contradict some previous ideas about the dialectal character of some markers such as “anyways”, and it also corroborates previous thoughts on the use of “like”. Of special interest is the description of the use of “sure”, since many of the elements taken into account for the analysis as a whole are not dialectal in nature, most of them occurring in different varieties. The particular present-day Irish English use of “sure” as a discourse-pragmatic marker is exemplified with historical instances as early as the 1760s and the author considers this dialectal feature in the letters an indicator of identity marking.

Chapter five is devoted to “deictics” which are seen as markers of “the sense of immediacy that is characteristic of spoken discourse” and thus, included in the analysis as examples of oral features in written texts. Spatial deixis is exemplified with “here” and “there” or “this” and “that”; personal deictics with examples of the use of personal pronouns. From the dialectal point of view the most significant pronominal forms in the chapter are those for the second person singular and plural, as the rest of them do not show any sort of variation across time or space. No time deictics are mentioned. The conclusions in this chapter go beyond the linguistic interpretation to enter the field of psychology through emotions and feelings that the author attributes to the use of these linguistic elements.

The last chapter in the analysis deals with “embedded questions”. Here again, orality is understood in the act of asking questions, and the focus is on the particular interrogative type where there is an inversion of subject-verb that some varieties of English do not allow for in formal discourse. Some authors have connected this pattern with the interference of Irish in bilingual speakers and the subsequent spread of the inverted structure to monolingual speakers of Irish English. However, the pattern is widespread in overseas varieties of English, such as American English, Australian English or different varieties in Asia. The analysis of the data in CORIECOR does not reach a definite conclusion regarding this matter, and the author suggests that both language contact and the fact that it was a pragmatically useful construction were equally responsible for the emergence and survival of such a structure.

All in all, Orality in Written Texts. Using Historical Corpora to Investigate Irish English 1700-1900 is a valuable study. From the viewpoint of historical dialectologists, the strongest points in the book have to do with the possibilities mentioned several times throughout the work for comparing the results of this analysis with similar ones on certain features in varieties of English which, in some way, have been in contact with Irish English. From a more historical linguists’ point of view, a much better understanding of overseas varieties and their history can be achieved through the comparison of what seems to have been dialectal features in the varieties of English spoken by the immigrants that settled in different regions or countries. Thus, studies of this type are welcome. The weakest point from a linguistic perspective, however, seems to be the chapter on ‘deictics’ since these are not strictly strong markers of orality. Besides, the linguistic analysis here cannot serve to draw conclusions about the history of this particular variety, nor are the psychological conclusions drawn from the usage of these features always totally convincing, as they are generalisations difficult to prove. The bibliography revised for the all the chapters is comprehensive, covering all these areas dealt with in the work. As a whole, this book is an interesting and valuable contribution to the fields of Irish Studies and the History of English even if the discussion of more oral dialectal forms would have been highly desirable to provide a wider scope and more elements to compare with other varieties of English with a view towards filling further gaps in the English language historical puzzle.