Out of Here and What Richard Did: Listlessness & Inarticulacy in the Young Irish Population

Out of Here and What Richard Did: Listlessness & Inarticulacy in the Young Irish Population

by Deirdre Molumby. This text may be archived and redistributed both in electronic form and in hard copy, provided that the author and journal are properly cited and no fee is charged for access. 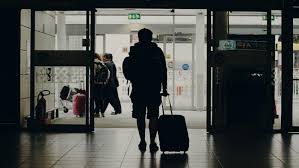 In recent years, Ireland has seen a major shift in confidence and self-value as the growth generated by the Celtic Tiger collapsed in the wake of the financial crisis. Recent Irish cinema has responded to this through the prism of young Irish people’s experience of these events. Three years ago, director Lenny Abrahamson released his third feature, the critically-acclaimed1 and award-winning2 What Richard Did, a representation of the young, affluent post-Celtic Tiger generation, albeit with a dark underbelly. In 2014, Donal Foreman’s debut feature Out of Here was released, this time reflecting on the experiences of the young, lost generation of Ireland in the wake of the recession.3 Foreman has said that he was attracted to Out of Here by “the idea of using the vehicle of a character returning to the city after a year away as a means to explore Dublin, especially Dublin as it is for young people, from a fresh angle – places he was once familiar with would now be estranged, so he has that double-sided relationship with the city.”4 Photographed by Piers McGrail, every shot and stylistic feature of the film feeds into this theme and the overall tone of the film. When Ciarán first arrives back at his house in Dublin, the shots taken through hallways and from outside of doorways create a sense of distance and strangeness in what should be a familiar place for Ciarán. There are a number of shots throughout the film of Ciarán simply walking around the city, reflecting his roving attitude and ambiguous feelings towards his return home. The film offers a mix of ugly and beautiful images, a city centre rubbish bin contrasts with the hidden spot that Ciarán is brought to by his friend, John (Dean Kavanagh). These mirror how Ciarán is now viewing Dublin in alternately familiar, new, and surprising ways. Foreman refuses to get too sentimental about Dublin but still gives the locations a sense of character and liveliness, whether it’s a mower tractor crossing an idyllic park scene, a jogger passing by as Ciarán looks out across Dublin bay, or even a seagull idly swimming past Ciarán as he himself takes a swim.

Fionn Walton, who stars as Ciarán (having previously appeared opposite Jack Reynor in What Richard Did), has said of his character in Out of Here: “He’s a reasonably ordinary young Irish man, so hopefully he’ll be relatable for the majority of audiences. In his early twenties, he’s on the cusp between adolescence and manhood, and he’s finding the transition quite difficult to navigate. He’s in the all too familiar situation of having expected that he might by now have some degree of clarity of what direction he’d like to take in life, yet feeling dismayed, adrift and conflicted about his future. He’s certainly restless and very frustrated, and there’s a great ambivalence to how he feels about his native city, which the film explores… I could certainly identify with the kind of listlessness he experiences, the difficulty he has in motivating himself, and the uncertainty he feels in relation to his future.”5

It is through Ciarán’s perspective that we follow the events of the film, but listlessness is also evident in the other young characters. His friends work in call centres or in short-term apprenticeships and, like him, most of them still reside at home, their reliance on cycling or public transport to get around a signifier of their limited financial means. His younger sister is planning on travelling for the year with a friend but they haven’t “sorted out exact jobs yet.” Jobless and lacking in motivation, the adolescents revel in drinking and socialising rather than worrying about the future, and are seemingly indifferent to it. The film presents a generation which, having completed formal education, is now confronted by a highly unpredictable future, lacking the predetermined pathways of earlier generations. Ciarán alone seems to exhibit frustration at this state of affairs: if other characters feel the same way they seem unable to express it.

Indeed, Out of Here represents the inarticulacy and incapacity of Irish young people to communicate their feelings effectively.6 Debbie Ging has identified Irish men as ‘variously troubled by verbal expression’ as a recurring feature of recent Irish cinema including Garage (2007), Kings (2005) and Parked (2010). In the case of Out of Here, both the trauma of recession and the unpredictable course of adulthood have also rendered its young male characters unable to articulate their fears and disappointment. This theme is indicated from the very first scene in which Ciarán and a friend have a nonsensical conversation at the end of a staircase. It is hard to take the exchange completely seriously given the two are intoxicated, laughing throughout the conversation, going from talking about ‘fisting’ to how they are best friends, and Ciarán makes sarcastic comments such as ‘You smell delightful’ as they hug. Ciarán also has a sarcastic exchange with Jess (Annabell Rickerby), his ex-girlfriend, and her new boyfriend at the cinema. When asked what he did while he was away, he jokes that he has actually been staying in his basement all this time.

The communication we see between the adolescents is based on humour, teasing and sarcasm. Conversations “curl and meander”7 rather than revealing emotions, which is probably why Ciarán is discouraged from articulating how he really feels about his return to Ireland. Asked how he feels about being back, he merely says “it’s my scene anyway”, which reveals little. He finds it difficult to express his feelings to Jess, who is much more open and says she was disappointed that he did not write to her. Even his apology for this turns into a joking “sorry for everything I ever did”, which breaks the tension and allows them to evade the subject. The truth about why he came home, that he was robbed, not because he wanted to return, is told to a group of drama students he has only just met rather than to his friends. His confession – “Now, I’d fucking kill to walk down one of these streets and just not bump into, or not see anyone I know… and I’m sick of walking around this place and being reminded of shit that’s over” – is told to people he will probably never see again. When he finally tells Jess he still has feelings for her, he can barely compose his words: “I like you, we should be together. I’m sad. I mean, if we can’t, I mean you’re the only…”

The adolescents of What Richard Did are from a very different background, inheritors of the ‘boom’ era rather than the ‘bust’. It is worth noting that that film follows the younger age group of seventeen to eighteen year olds rather the twenty-something year olds of Out of Here, and thus the characters don’t have the same pressures of “settling down and getting a job”. Richard (Jack Reynor) and his friends are well-educated, cheerful characters with Richard as their ‘golden-boy’ – accomplished and adored by all his peers. Though they are more affluent, like the young people of Out of Here they lack a sense of direction. Richard says he wants to study full-time and play rugby but we never learn what he intends to become. His girlfriend Lara (Roisin Murphy) is also unsure of what she wants to work as, telling Richard’s parents she will “just do Arts”. In both films, the youths spend a great deal of screen time drinking and having ‘craic.’ The Dublin setting shared by both films is also important. According to Frank Mort, the urban landscape evokes “fractured identities” for young men as the spaces and places of cities “thro[w] up new cultural personas.”8

Although Richard tells his friends early on in the film that he “can talk to them about pretty much anything”, this turns out to be untrue as he becomes closed off and introvert when he and his friends accidentally kill an acquaintance, which marks the turning point of the film. When he confesses what he has done to his father, his father walks away from him. Instead of opening up to friends and family, Richard cries to himself and a particularly powerful scene in which Richard screams and thrashes about in anguish at what he has done captures the frustration of a generation that is unable to grasp or do anything about the unprecedented changes that adulthood and responsibility brings. Richard seemingly gets away with his crime, as he is shown attending college in the film’s closing shots, but he no longer socialises and keeps to himself.

Although Richard comes from a very different context to Ciarán, both share traits of listlessness, inarticulacy and trauma. In Ciarán’s case, the latter comes from a combination of “reverse cultural shock” in returning to Dublin as well as the impediments incurred by the financial crisis. While a society experiencing permanent crisis creates difficult if not intolerable conditions, Ciarán can be seen as particularly traumatised given he was part of a generation raised in more prosperous times.9

Richard experiences trauma as a result of murdering someone and having to lie about it. If Richard is a child of the Celtic Tiger, it may not be too much of a stretch to say that his lies and unacceptance of responsibility mirror those of the politicians and bankers of the era.

What is also refreshing in both films is that neither Abrahamson nor Foreman judge or, in Richard’s case, punish the young men for the situation they find themselves in. This has been recognised by other critics: Debbie Ging has written that What Richard Did “is preoccupied with the moral crises experienced by the characters after the event rather than with their motivations”10, while Gavin Burke, in his review of Out of Here, also recognises that “there’s no pointed finger, no blame – this is just how it is.”11 Though Ging assigns a degree of blame to Richard’s father, who does not exercise paternal authority and instead helps his son “get away with it”,12

it is a relief that, rather than assigning guilt, the audience is left to make up their own minds about what it means to judge a character, particularly when they are young and have not yet become responsible adults.

One could argue that the themes of listlessness and inarticulacy are not uniquely Irish but universal issues for young people. However, I have shown that what make these texts unique are their foundations in place and time. While What Richard Did contemplates the inability of the wealth generated by the Celtic Tiger to solve young people’s problems (and in fact, arguably, led to a morality crisis as materialism and competitiveness replaced values such as self-sacrifice), in Out of Here the financial crisis has left the young generation jobless and freewheeling.

The final shot in Out of Here is glorious and celebratory, as Ciarán and his friends run naked into the sea until they are lost in the darkness, their delighted shouts lost in the distance and only the ocean waves heard as the credits roll. It would seem that the Great Recession has not quite crushed the spirit of the young people it left behind and that Ciarán has decided to live life for the moment. Although this resolution only really delays Ciarán’s dilemma (and that of the Irish young people he represents), still, perhaps inaction is unavoidable. Irish youths may have no other choice except to emigrate or to wait for things in the country to get better. The only problem with this is it won’t be long before they become the adults responsible for that change.