Out of the Earth: Ecocritical Readings of Irish Texts (2010)

Out of the Earth: Ecocritical Readings of Irish Texts (2010)

by John Eastlake. This text may be archived and redistributed both in electronic form and in hard copy, provided that the author and journal are properly cited and no fee is charged for access. 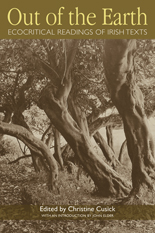 Out of the Earth: Ecocritical Readings of Irish Texts by Christine Cusick (ed.), with an introduction by John Elder.

Irish Studies has seen a proliferation of theoretical perspectives made explicit in the past decade, even while questions linger about the disciplinarity of Irish Studies itself. Whether viewed as a concentration of interests, lines of inquiry based on a foundation of literary and cultural theories, or an emergent discipline, Irish Studies has proved a warm and welcoming environment for the application of multiple theories to familiar subjects. Unlike the growing momentum behind “Transnationalism” in Irish Studies which has resulted in multiple publications in various areas of the discipline, and innumerable panels at the major Irish Studies conferences, Ecocriticism has yet to be established as a major feature of our academic landscape. (For instance, at IASIL 2010, there was no dedicated panel for Ecocriticism.) The volume in hand collects eleven essays, bracketed by John Elder’s “Introduction” and the editor’s interview with Tim Robinson. Ecocriticism has the demonstrable potential to develop into an important area within Irish Studies, as the recent “Ireland and Ecocriticism” conference, organised by Dr Maureen O’Connor, attests. This volume may therefore prove useful in the further development of Ecocriticism in various Irish Studies venues, and will hopefully encourage the development of coursework on Ecocriticism and Irish literature.

The contributions by chapter, with two exceptions, focus on single authors and selected texts thereof: Eamonn Wall on Richard Murphy; Joy Kennedy-O’Neill on J. M. Synge; Joanna Tapp Pierce on Elizabeth Bowen; Greg Winston on George Moore; Kathryn Kirkpatrick on Paula Meehan; Donna Potts on Michael Longley; Maureen O’Connor on Edna O’Brien; Miriam O’Kane Mara on Roddy Doyle; and Karen O’Brien on Martin McDonagh.  Jefferson Holdridge discusses both Lady Morgan and William Carleton, and Eóin Flannery addresses Irish tourism, colonialism and landscape. The volume is cleanly edited, well presented, and includes both a collated bibliography and a useful index. Though the contributions are of consistently high quality and benefit from being brought into proximity with each other, there is no direct engagement between contributors. Some chapters focus tightly on Ecocriticism, demonstrating its capabilities as a perspective and tool, while others stray further afield in pursuing their readings. As Elder notes, the authors and texts discussed stem mostly from the late-nineteenth and twentieth-centuries, which provides a coherent focus for this collection of essays. In general, Elder’s introduction is laudatory, and pithy. He writes, “There’s a purposeful and dialectical character to this volume’s critical project” referring to his assertion that ecocritical readings have the potential to simultaneously reveal both “the sceptical and debunking energies” of Irish authors, while not “denying their underlying intention to find a more sustaining and positive vision”. He adds that ecocriticism should  be “muddy boots crumping into the academy”, riffing off Tim Robinson’s comments in the closing interview, suggesting ecocriticism may be a galvanizing force in the study of literature in the academy on both sides of the Atlantic.

Initially, the lack of an editorial introduction, laying out, at length, the emergence of Ecocriticism and its applications in Irish literature, may be off-putting to the reader, who is seeking justifications for the project. However, the editor has done her work well, as the chapters are arranged to draw the reader along. Wall’s essay opens the collection and does a good deal of heavy lifting in explaining in fruitful summaries the development of environmental studies in the USA, and the manner in which ecocriticism has subsequently become available to critics of Irish literature, especially poetry. And, in Kennedy-O’Neill’s essay, (reprinted from ISLE), she argues for the utility of ecocritical reading: “by examining Synge’s use of nature with an ecocritical approach, one can see that it does not conform to many of the traditions of British writers” and reveals “a blend of uniquely Irish ambiguities towards place”. Winston further advances the overarching discussion by examining agrarian spaces in Moore’s The Untilled Field, acting on a need to push ecocriticism beyond wilderness/civility dichotomies of environment. As well as collapsing and transcending analytical dichotomies, O’Brien (in a essay first published in the Journal of Dramatic Theory and Criticism) identifies ecocriticism as a way to address contradictions in representation  and mimesis, such as those found in McDonagh’s attack on Man of Aran, which she argues parallels the “fracture that displaces the interrelationships between the human and nonhuman world”. Further on, the links between Ecocriticism and Ecofeminism are introduced and interrogated in both Kirkpatrick and O’Connor’s essays. O’Connor writes: “The historical background of another emerging field, in which this current volume makes an important intervention, that of Irish ecocriticism (and ecofeminism), has suffered similar neglect, possibly for a related reason; that is, the humiliating history of British colonial discourse that has both feminised and zoontologised the Irish”. While there is no single chapter that recaps the history of ecocriticism, the contributions, in volume form, are admirably efficacious in developing the reader’s appreciation and understanding of the origins of Ecocriticism in environmental studies and literature and its current polyvalent potentials.

A recurring theme in several chapters raises questions about the relationship between ecocriticism and the voluminous body of space/place theory, and as this discussion is left to the background, the argument for ecocriticism’s utility in this respect is, perhaps, left unmade. In Tapp Pierce’s contribution, Bowen’s use of landscape is allowed “to come fully alive” through an ecocritical reading, focusing on the relationship between “’literature and the physical environment’”, but Tapp Pierce also acknowledges the overlap or even interchangeability between it and a reading based on “sense of place” and “neo-primitivist animism”. Tapp Pierce goes on to explore the complexities of Bowen’s work admirably, teasing apart the differing threads of Bowen’s relationship with her family home of Bowen’s Court, but in doing so, raises a question about how prominent “physical environment” is when compared with the historical, social, cultural, personal, and familial aspects of place. The legacy of Seamus Heaney’s work on “sense of place” is keenly felt, as are Tim Robinson’s contributions. While Ecocriticism may be fully compatible with the work of space/place geographers and philosophers, a direct examination of this issue would be most welcome. The lack of a full editorial chapter (beyond the editor’s “Acknowledgements”) is a missed opportunity for a volume that is described as “an unprecedented integration of Irish Studies and Ecocriticism” on the jacket. Two major areas are left unaddressed as a result: the lack of a chapter on Ecocriticism and Irish-language literature (of any sort); and, a general lack of discussion about the potential “depth” of Ecocritical approaches in Irish literatures in Irish and English. Without any explanation given, that the poetry and prose of Nuala Ní Dhomhnaill (for example) are not discussed in a volume centred around modern Irish literature and the environment, is simply mystifying. It is alluded to in several of the chapters, and on the jacket copy, that eco-based readings of Irish literature are likely to be sustainable for all periods, not just the modern. The jacket asserts that the importance of place “is in fact rooted in ancient traditions of Celtic mythology and place-lore”. This is something of a leitmotif throughout the volume, which perhaps calls for a follow-up volume to argue this assertion that looks at a much broader range of texts including earlier periods and from both the Irish-language and English-language literary traditions.

This volume will serve the interested reader well, marks a stimulating entrance for Ecocriticism into our discipline, and could be the starting point for another sustained discussion in Irish Studies.