by Tina O’Toole. This text may be archived and redistributed both in electronic form and in hard copy, provided that the author and journal are properly cited and no fee is charged for access. 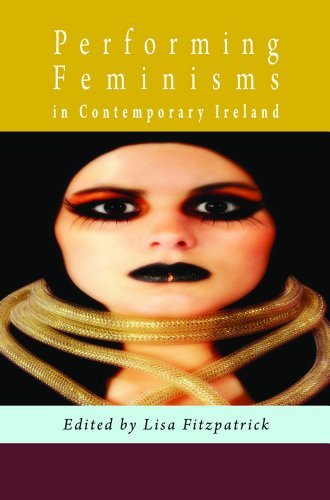 Edited by Lisa Fitzpatrick, who teaches drama at the University of Ulster, this collection foregrounds work by scholars, practitioners, and activists in the field of contemporary Irish performance. Opening with Derek Speirs’ arresting photograph of the ‘Pill Train’ in May 1971 which captures the public staging of Irish feminist resistance, the book charts the subsequent history and experience of feminist performance. Fixing individual moments in that history, contributors confirm some gendered clichés associated with Irish theatre (for instance, that women are not as well represented as men at all levels of the profession; that canonical Irish drama and its reception is a masculinist domain), while countering others by advancing new perspectives on contemporary Irish drama and its staging, both inside and outside formal arenas.

Foundational essays by Sara Keating, and by collaborators Charlotte Headrick and John Countryman, explore women’s participation in contemporary Irish theatre. Keating’s discussion of the 2011 Dublin Theatre Festival underlines the growing significance of site specific performance, citing Louise Lowe’s recent work as one example of this kind of theatre, in which woman are visible at all levels of the production. This is a timely piece given that Anú Productions, with Lowe as Artistic Director, achieved significant public attention and critical acclaim in the summer of 2013 for its “Living the Lockout” project (recently nominated for a Jury Prize in the Irish Times Irish Theatre Awards). Headrick and Countryman explore the disjunct between contemporary Irish-based work where women playwrights and directors are now achieving prominence, and the international staging, reception, and anthologising of Irish drama, which is still a male-dominated field. Amplifying these issues, essays by Maria Kurdí, Brenda Donoghue, and Susanne Colleary home in on specific representations of gender and sexuality onstage, considering the work of Irish women writers and performance artists such as Teresa Deevey, Marina Carr, Miriam Gallagher, Stella Feehily, and Maeve Higgins.

Tom Maguire and Carole-Anne Upton’s thought-provoking exploration of gender binaries in Irish myth attempts to “renegotiate women’s representation on the Irish stage” (80). Dealing with two stagings of material from the Ulster Cycle (Storytellers’ Theatre production of Mary-Elizabeth Burke-Kennedy’s Women-in-Arms (1988) and Big Telly’s The Pursuit of Diarmaid and Gráinne (1999)), they outline the spatial liberation of the female figures, and the emphasis on gender fluidity in both plays (87; 89). However, they concede that despite the apparent radicalism of this work, each play nonetheless “sets the agency of the women as a source of threat to their own people” (89). Furthermore, highlighting the marginalization of women in “the specifically masculine sphere of violence” onstage, they suggest that this has more widespread application in the culture: “Even Derry Playhouse’s recent Theatre of Witness production I Once Knew a Girl (2010) … found it difficult to present openly the violence in which female members of paramilitary organizations were involved” (89).

Considerations of women’s agency and armed dissent are apposite in this “decade of centenaries”. In their fine essay on the reception and memorialization of Constance Markievicz, S. E. Wilmer and Mary Caulfield lament the “scant efforts” made to represent women in nationalist iconography and in the Dublin cityscape specifically (although the recent naming of the Rosie Hackett Bridge following a public vote may be an optimistic sign of things to come). Providing a “thick description” of Markievicz’ life and career, Wilmer and Caulfield outline her diverse contributions to national culture as a writer, public speaker, and activist across a range of organisations and publications in the revolutionary period and beyond. Throughout, the essay attends to Markievicz’ self-conscious performativity as a militant, her investment in the narrative of Joan of Arc (whom she played in a suffragist pageant in 1914), and her ongoing engagement with theatre both as public spectacle and as an impetus in the national struggle. The received idea of “the Countess” tends to fix on that well-known photograph of her in full uniform which, Wilmer and Caulfield suggest, is perhaps “too iconoclastic to gel with Irish notions of female modesty and subservience” (100). This conclusion is based on one of the few monuments to Markievicz in Dublin, a domesticated one in which she is represented in a modest ankle-length skirt and blouse, alongside her dog, outside the swimming pool named after her (109).

Extending the impetus of site specific work mentioned earlier, several essays in this collection focus on community-based and activist arenas for feminist performance. In her introduction, Fitzpatrick signals the intention to enliven “the performances of everyday life that mark and shape identities” in order to “consider the ways in which feminism is ‘performed’ in everyday life by ordinary women” in contemporary Ireland. This move is evident, for instance, in Jacinta Byrne-Doran’s exploration of the “intergenerational influences” on working mothers, and in Fitzpatrick’s own essay which focuses on the interaction between domestic violence in the lived experience of Irish women and its representation onstage. Fitzpatrick’s work on the reception of such plays in the 1990s is useful; the line from one contemporary review, “Brothers, I think this is one for the Sisters” is particularly revealing (189).

Something of the grassroots creativity and determination of feminist activism is in evidence in Megan Buckley and Julia Walther’s analysis of second-wave publishing, and the more recent interventions foregrounded in Fiona Bloomer’s treatment of parades and the pro-choice movement in Northern Ireland. That same energy animates Alyson Campbell and Suzanne Patman’s account of Ruth McCarthy’s queerzine activism in the 1990s and 2000s, which they describe as “an irreverent but vital response to a prevailing culture of conservative heteronormativity” in Belfast at that time (224). McCarthy’s recent achievements as Director of the OUTburst Queer Arts Festival may be seen as a sign of how much has changed in that city in the meantime. Interventions such as these, perhaps, suggest ways in which activism and performance can interact to provide new directions for future development.

Taken as a whole, this collection provides informed insights into Irish theatre, to the wider sphere of performance, and to the achievements of Irish feminist activists in the culture over the past four decades. Achieving what it sets out to do, Performing Feminisms in Contemporary Ireland makes a welcome and timely contribution to Irish studies and to gender studies.