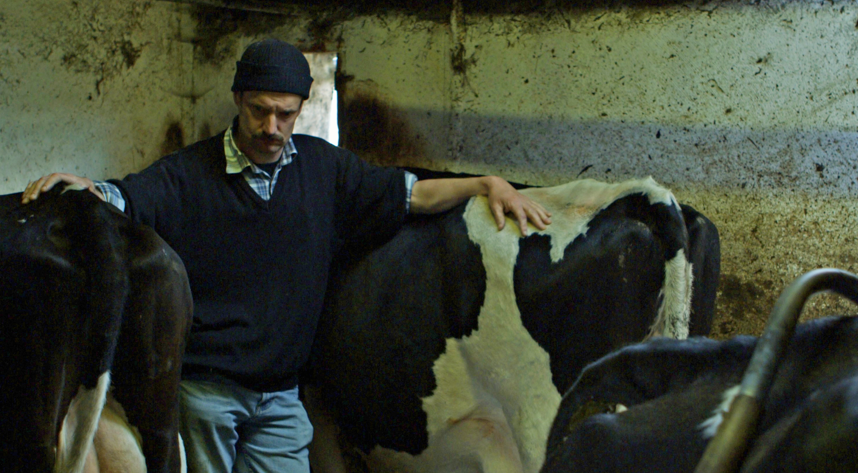 Gerard Barrett’s low-key Pilgrim Hill was a somewhat unexpected hit during 2013, the Brown Bag Films writer’s debut feature not only receiving its international premiere at the Telluride Film Festival, but earning him its Great Expectation award.  Add that to the Bingham Ray award at the Galway Film Fleadh and places at the London BFI Film Festival and Busan International Film Festival, as well as an IFTA Rising Star award, and the film’s success appears wildly disproportionate to its ultra-low-budget origins.  Costing a meagre €4,5001 and filmed in just seven days in Barrett’s native Kerry, part of the film’s subtle appeal lies in its resolutely downbeat approach to its material.

Joe Mullins (Killinascully) stars as Jimmy Walshe, a middle-aged, under-educated farmer eking out a living on a small farm on the eponymous Hill, where the natural sounds and measured seasonal rhythms of rural life dominate, and emotional connection remains elusive. Jimmy clears the rushes from his boggy land, cleans and maintains his pebble-dashed bungalow and outbuildings, feeds and milks his small herd of cattle, with the same deliberate care with which he tends to his bedridden father. This is no Rousseau-inspired bucolic idyll, nor does it call to the romantic representations of rural Ireland of The Quiet Man.   Jimmy’s silence speaks of regret and loneliness, the demands of his solitary life eased only by the occasional match or funeral, his closest companions the cows to whom he deals out unsentimental, companionable pats.

A painstaking measuring-out of time dominates, Barrett’s – often silent – focus primarily on the accumulation of moments, the minutiae of Jimmy’s daily life.  The leisurely pace resolutely refuses to fetishise the Irish countryside or the unfolding of ‘natural’ time, placing its passage of time not as ‘serene’, so much as ‘anaesthetic’, and solidifying gradually into a picture of rural Ireland in crisis.  In one sense, this is a deeply personal catastrophe of identity.  Jimmy, the product of an unhappy “arranged marriage”, his mother’s early suicide, and his father’s resulting bitterness, admits that he “kinda feel[s] trapped sometimes with it all”.  The practical obligations of farming and the familial obligations which concern him are not presented as ‘timeless’ inevitabilities, but are contrasted with Jimmy’s more contemporary awareness that other options could once, perhaps, have been available to him. In this sense, Jimmy occupies a hinterland between modern and (implied as more restrictive, and emotionally brutalising) traditional visions of Irish masculinity.  Although he frames this generational transition in explicitly personal terms, speaking of his regret at not standing up to his father and talking of his wasted longing for a family of his own – specifically a daughter, which would mark a kind of symbolic end to the patriarchal dominance of the countryside – the generational issues invoked here are not Jimmy’s alone.

Barrett’s Kerry is almost exclusively occupied by men, and old men at that; bidding on calves at the mart, in the pub casually conversing about the weather. Jimmy’s shyness isolates him from them too, but the cumulative impression is one of rural Ireland embedded in a kind of transitional limbo, one which seems as defined in masculine terms as much as in socioeconomic ones.  This is seen clearly in two elements.  The first is the pointed distinction made between Jimmy and the brash Tommy, who is “ridin’ the dole train” for want of better options.  While emigration to Canada or Dubai is his only real future, Tommy’s youthful naivety – suggesting that the barely literate Jimmy should abandon the farm to go to college – signals a clear rejection of traditional rural norms.  So too does his description of Jimmy’s turf-cutting as “caveman stuff”, and his misguided attempt to engage Jimmy in a more contemporary social milieu, all conversation lost amid the banging techno and bikini-clad podium dancers of the local nightclub.

Alcohol here occupies a privileged and yet problematic place, as seen in the emphasis given to Jimmy’s anxious encounter with the Garda who breathalyses him on his journey home.  While the Garda – presented, significantly, as new to the area, in contrast to the deeply-embedded Jimmy – notes gently that “if you only had the one you’ve nothing to worry about”, the process is framed both as an invasion of Jimmy’s privacy as an individual, and as an intervention into the ‘traditional’ practices of rural Irish men, whose social lives have, it is implied, historically been dominated by pub culture. Here the film edges towards didacticism, in that drink-driving limits have become a notable contemporary battleground for the politics of rural Irish culture.  However, Barrett turns away from explicit position-taking on the matter, preferring instead to focus on a more general concern with the impact of bureaucracy and technology on rural Ireland.

The very technology that allows Jimmy to eke out a living on “thirty acres on the side of a hill out in the back end of nowhere” – his milking machine, his tractor – also guarantees his increasingly painful solitude. The rhythmic cadence of the milking machine may still, as he casually strokes his animals, call to older patterns of life, but a more telling shot is that of Jimmy and another man at the petrol pump, each silently filling a car, never communicating, intent on the screens.  This focus on presenting modern Irish life as both emotionally distancing and structurally bureaucratised is reinforced when a Department of Agriculture official arrives to inform Jimmy that a tuberculosis reactor has been found in his herd, and he must hand over his cattle’s papers and dispose of each day’s milk.  Here, while there is no direct criticism of the work done, the emphasis is on illustrating the intimacy of bureaucratic controls, the intensity of the watchful Departmental eye contrasted with Jimmy’s day-to-day loneliness.

Pilgrim Hill is anchored by Joe Mullins’ thoughtful performance as a man who visibly dwindles before us as his options shrink. The film’s visual style demands a particular kind of realist performance, as Jimmy’s hesitant monologues are framed as responses directly to camera: there is no sign here of the interrogator, but the implied-interview style, and the emphasis on – often appealingly overlapped – diegetic sound, create the sense of the film as a ‘documentary’.   In that context, Mullins’ occasionally halting facial gestures and tentative speech give the deliberate, greatly affecting, sense of a man who has been so seldom emotionally engaged with, that his capacity to express, or even identify, his own feelings has begun to ossify.The restricted budget, with interior shots often greatly limited in their scope, such as those in which Jimmy is framed from the corridor, talking to his forever unseen and unheard father in the bedroom beyond, also works to emphasise the constraints and limitations of Jimmy’s life and opportunities.  As the film comes to a conclusion, however, the framing shifts to a more self-consciously ‘cinematic’ style (albeit a rather distanced one) with lush music overlaying the climactic stand-off  between Jimmy and those allied forces of bureaucratic Ireland, the Garda and the Department of Agriculture. Such a climax could have been discordant, or indeed overly sentimental, but Barrett manages to avoid this by briefly silencing dialogue in favour of music, then returning the film swiftly to its previous spare, analytical style.

Jimmy’s conclusion is as unsentimental and spare as his affection for the cattle which have been taken from him: “My future is thirty acres on the side of hill out in the back end of nowhere, with no prospects. Maybe a life in the pub. And grow old, like so many people I’ve seen, with nobody.  So many people who’ve given up. And just exist.”  The film’s final shots of the empty farm, soundtracked simply by the wind, are left to point towards an implied future of loneliness and despair, a rural Ireland which speaks only of lost youth and wasted opportunity.