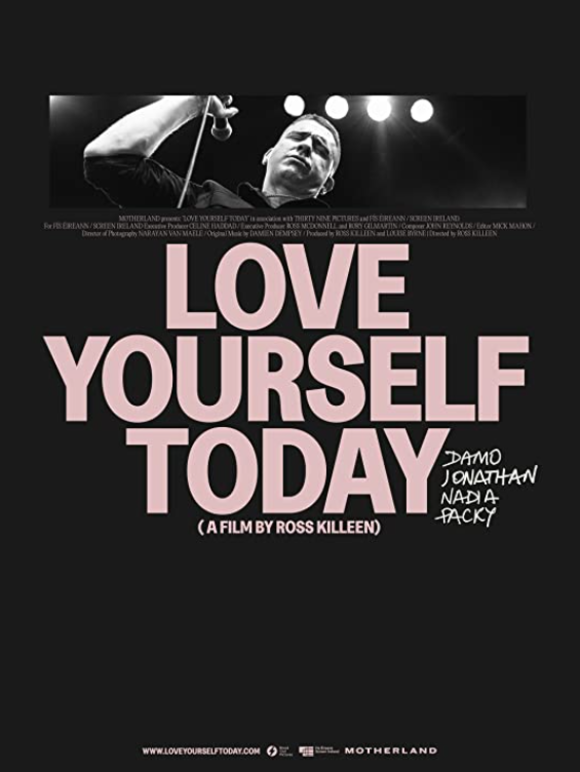 There is an extraordinary moment about halfway through Ross Killeen’s gorgeous, absorbing, life-affirming documentary/concert film, a work that probes the meaning of Dublin singer-songwriter Damien Dempsey’s everyman appeal. As ‘Damo’ performs his ballad Chris and Stevie, the camera lingers on several audience members shedding quiet tears at the story of two friends lost to suicide. Harnessing the emotion of the moment, Dempsey rides the wave and coaxes the audience into catharsis, as they join as one to deliver the song’s powerful coda:

Talk to me and tell me how you feel.

Lean on me, I’m here, my love is real

It’s impossible not to be moved by the emotional power of the sequence. In that instant, the documentary equivalent of a narrative point of no return, the film reveals itself. Dempsey (‘Damo’) is the centre, the linking figure between several overlapping narratives, but ultimately, the story is not about him. It’s about trauma, as revealed through the stories Killeen and editor Mick Mahon weave around Damo’s triumphant annual Christmas gig at Dublin’s Vicar Street venue. It’s also about the healing, redemptive power of music in dealing with that trauma. During Damo’s shamanic performance, it feels as if the music flows through him, not from him – echoing the singer’s recollections of advice received from Christy Moore, one of his heroes and early champions. The performance, from Christmas 2019, and more importantly the audience reaction captured by the filmmakers, are powerful reminders of the value of live music to Irish cultural life, and the loss represented by the shuttering of venues like Vicar Street during the Covid-19 pandemic.

Dempsey’s songs, thematically concerned with a multitude of issues – drugs, religious oppression, the working-class suburbs, gentrification, anxiety, anger – project a powerful sense of place. Killeen’s documentary explores the boundaries of that place, interweaving impeccably captured performance footage with portraits of four trauma victims. We meet Nadia, a former heroin addict; Packy, whose depression fuels his love of boxing; Jonathan, a recovering alcoholic; and Damo himself, whose youthful ‘wildness’ might well have brought him to an entirely different place. Killeen documents these four characters and their formative experiences, eloquently articulated by the individuals themselves, as they navigate their respective journeys towards self-insight and varying degrees of redemption. Their relationship with Dempsey’s music is never directly articulated. However, their presence at the performance, their obvious familiarity with the music, and their clear identification with the often dark themes of the songs, all combine to underline the importance of the music to their lives.

Cinematographer Narayan Van Maele’s empathic visuals reveal the dignity and beauty in these characters’ everyday actions: Packy’s quiet encouragement of a young boxing pupil; Nadia’s affection for the women and men in her counselling programme; Jonathan’s love of sea-swimming; Damo’s embrace of nature on the slopes and forests of Howth Head, the Dublin landmark that looms over the northside suburbs where he was born and raised.

Love Yourself Today blends the poetic with the observational in a seamless combination of documentary modes. Van Maele’s monochromatic tableaux highlight, in a literal way, the contrast between light and shadow that represents, metaphorically, the emotional worlds of the four protagonists. And protagonists they are: without these stories, Dempsey’s performance would be stripped of much of its power, reduced to the tribalism of football-terrace chanting – a quality it undoubtedly contains, but easily transcends.

The film is Ross Killeen’s feature directorial debut, following the short films Becoming Men (2013) and 99 Problems (2019), both of which contain visual and narrative elements that prefigure the Dempsey film. Killeen’s production company, Motherland, is based in Dublin’s north inner city, bringing together a self-described “collective of directors, producer and editors”, making commercials, corporate multimedia, music videos and now features. Much of Motherland’s short-form work is infused with the social realism and sense of place that infuses Love Yourself Today, characteristics that set the film apart from other Irish music documentaries and concert films more generally.

To make the film, Motherland received a production loan from Screen Ireland and further subsidy through the Section 481 tax credit. The film had a limited theatrical release in Ireland and the UK in November, realising (according to the-numbers.com) box office revenues of $22,500 from 20 screens. Distribution was handled by Break Out Pictures, a recently established company headed by Nell Roddy and Robert McCann Finn, both formerly of Element Pictures. While the box office return has been unspectacular, the delayed release was undoubtedly affected by the Covid-19 pandemic, which continues to impact on the cinema and other sectors of the arts. Motherland, Dempsey and everyone else involved will have been encouraged by the January 2022 announcement that Love Yourself Today has been picked up for global distribution by 101 Films International, the London-based distributor and sales agent.

It remains to be seen, then, if Ross Killeen’s documentary/concert film, and indeed Damo’s musical persona, will appeal to audiences beyond Ireland, perhaps through a ‘long tail’ strategy across various international streaming markets. Either way, the film represents a considerable achievement for Killeen, Motherland, and Dempsey himself, whose film involvement to date has been mostly confined to cameo roles in home-grown crime dramas such as Between The Canals (2011), Split (2016), and Cardboard Gangsters (2017).

Undoubtedly, Love Yourself Today is a more suitable vehicle for Dempsey’s unique ability to connect with an audience. There is no arguing with the “positive vibes” that wash over the ecstatic Vicar Street crowd, as the camera swoops from the rafters, discretely capturing moments of intimacy, ecstasy and collective abandon.