by Jenny Knell. This text may be archived and redistributed both in electronic form and in hard copy, provided that the author and journal are properly cited and no fee is charged for access. 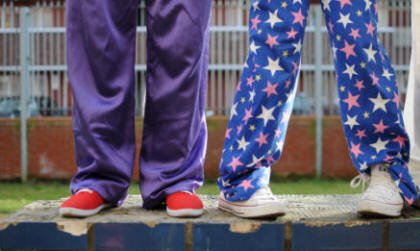 Pyjama Girls, the latest feature documentary from the Still Films collaborative, explores the provocative fashion of daytime pyjama-wearing which is commonplace amongst Dublin’s working-class communities, particularly the inner city flats. Over the past decade, the so-called ‘pyjama girls’ (this trend is exclusively female) have become an increasingly visible cultural icon of the city’s working classes, reinforcing, for many, stereotypes about social exclusion, unemployment and absent ambition in these already stigmatised areas. Although pyjamas may simply be considered a fashion choice for the young girls, they have become, in the wider cultural imaginary, an ideologically-charged uniform of class that constitutes part of a larger process of socio-spatial division within Dublin’s urban landscape. In this sense, the film’s attempt to document this class-specific subculture renders visible the “possibilities for how class can be spoken and known, both directly and indirectly, across a range of sites” (Skeggs 2004: 5). It is through this process of transference that Pyjama Girls articulates class. By using the symbolic figure of the ‘pyjama girl’ as the thematic hook, the film explores how social class, more broadly, frames the experiences and marginalised position of young, working-class women in Irish society.

The film’s director, Maya Derrington, initially conceived the idea for a documentary on the ‘pyjama girls’ based upon her own fascination with the ubiquitous presence of nightwear on Dublin’s inner city streets, combined with the increasingly impassioned reaction to this which was often publicly vented through various media outlets. Alongside the primary inspiration of the ‘pyjama girls’ themselves, Derrington synchronously imagined the project through a spatialised awareness of ‘the flats’ as ghettoised urban spaces that exist outside of society’s line of vision. According to Derrington, Pyjama Girlsattempts to show the other side of the social class divide to “those living in Dublin today who have no idea of the parallel lives of the people living around them” (O’Connor 2010).  As iconographic mainstays of Dublin’s classed geography, ‘the flats’, like the ‘pyjama girls’, represent another form of class transference, whereby socio-economic difference is inscribed upon urban space through the same process of inscription that marks the working-class female body. The working-class landscapes of the city become knowable and are produced through these culturally-specific and readily visualised entry points.

Filming in the Basin Street flats, Derrington initially worked towards compiling interviews on the pyjama theme until, relatively late into the production process, she met Lauren Dempsey and Tara Salinger, two teenage girls who spoke frankly and honestly with the filmmaker about their life experiences. While maintaining the overarching ‘pyjama girls’ structure, Derrington shifted the film’s orientation towards exploring the girls’ relationship and their home lives, particularly Lauren’s fractious relationship with her drug-addicted mother. As a result, Pyjama Girls, despite the implication of the title, is less about the fashion phenomenon and more resolved towards observing the ‘microdramas’ (as the filmmaker describes them) of teenage life and the enduring bonds of female friendship. Derrington builds her documentary around three main subjects: the girls, who provide the film’s warmth and emotional core; the pyjamas, which maintain a consistent presence throughout the film on the level of narrative theme and visual motif; and the flats, which likewise reoccur throughout the film as another storyline.

Pyjama Girls is anchored emotionally in the girls, and the many scenes revolving around Tara and Lauren and unraveling their life stories infuse the film with heart, and give the narrative meaning and substance. Derrington foregrounds friendship as the supportive and stabilising influence for the girls, particularly for Lauren, whose turbulent relationship with her mother is a source of massive upheaval in her young life. As the documentary unfolds, Lauren reveals the bittersweet and often harrowing details of her childhood: her mother’s manic, drug-fuelled episodes which resulted in the fragmentation of the family unit and the infliction of physical violence on her eldest child. Lauren later reveals that she has enrolled in anger management therapy because, she only half jokes, «me ma’s a gearhead» (i.e., addicted to heroin). Tara and Lauren’s behaviour appears to be largely informed by such violence and aggression. Further, the girls’ unselfconscious discussion of such topics as drugs and teenage pregnancy suggest that these types of social issues are everyday realities, and therefore normative, in a tough environment like the flats or Ballyfermot (where Lauren now lives with her grandmother). Through these insights into their everyday reality, the film implicitly shows how social class fundamentally shapes the girls’ lives in the form of premature exposure to danger, violence and drugs.

Despite the absorbing drama created by the girls themselves, the film consistently turns back to the eponymous pyjama subject. Derrington foregrounds pyjamas in the film’s opening (and bookend closing) scene, which shows Lauren and Tara shopping for pyjamas and discussing their affection for this relaxed type of clothing: Lauren declares, “They’re comfy, gorgeous. I’d even get changed into them to go down the road.” Throughout the film, Lauren, Tara and the majority of their friends wear their pyjamas in the flats, around Ballyfermot and even into town. Derrington directly addresses mainstream society’s vexed reaction to the ‘pyjama girls’ by overlaying an audio recording of an Irish radio call-in show devoted to this topic, significantly, upon a montage of still images of the flats. While the DJ concludes that the fashion trend can be reduced to the attitude of “Society doesn’t give a toss about us, so why should we give a toss about society?”, the film, speaking through one of the ‘pyjama girls’, dismisses this politicised interpretation. Lauren offers the film’s definitive explanation for this phenomenon by explaining that the choice to wear pyjamas relates to the close-knit environment of the flats and the resulting perception of the community’s extended space of home. The whole flat complex becomes like ‘your house’, and there is a familiarity engendered by everybody knowing each other. The wearing of pyjamas represents belonging and communal identity for girls, while also, more broadly, suggesting that the confined architecture of the flats has given rise to specific ways of inhabiting urban space for Dublin’s working classes. Despite the film’s attention to the pyjama question, Derrington conspicuously ignores certain areas of inquiry associated with Dublin’s pyjama girls, such as the role that Penneys, in particular, has played in promoting this fashion trend. (Interestingly, Derrington indicated that she shot the required ‘pyjama’ scenes in Dunnes because Penneys declined to give the crew permission to film in their stores. It is unclear as to whether this was for logistical or ideological reasons.) As a result, film has a limited engagement with the broader context of the pyjama-wearing trend. The ‘flat culture’ theory unsatisfactorily (albeit with interesting implications for the film’s rendering of urban space) consolidates the complexity of the issue into a singular view that fails to account for the widespread embrace of pyjamas outside the confines of the flats.

Space plays a central role in determining the experiences of the documentary’s subjects, on the one hand, but also fundamentally informs the structure and aesthetics of the film. Although Pyjama Girls is mainly filmed in Ballyfermot, Derrington’s interest hinges upon constructing the real and imagined spaces of the flats. The flats, for Derrington, in addition to their powerful signification of the urban working-class landscape, provide a visual counterpoint to the pyjamas:

There were two things in my mind as I began, one was the bright softness of the pyjamas as a metaphor for female teenage life and against that the harsh lines of the flats. I was really struck by the architecture of the area which combined brutality and community, so I wanted the place to be very present within the film («Spotlight» 2010).

Derrington’s conception of the flats is highly emotive and grounded in the physical texture and orientation of Dublin’s working-class architecture. The film establishes the ‘character’ of the flats through Lauren’s description of her experiences of the inner city complexes: “blocks and blocks of young ones with kids”, Lauren remarks, and attributes the beginnings of her own teenage rebellion (i.e., dabbling in drugs) to the damaging influence of this environment. The flats assume a life of their own within the film, even generating their own storylines through several short scenes involving a group of young boys with seemingly directionless energy: they are shown breaking apart Styrofoam, drawing on concrete blocks and startling the locals by hiding in a flat screen television box. These events, insignificant in and of themselves, become highly evocative of place in terms of capturing the atmosphere of this environment. Perhaps Derrington’s most original contribution to contemporary Irish cinema’s rendering of Dublin’s working-class spaces, however, is through the highly stylised montages of the flats and their surrounding environment, which, as the film establishes, constitutes the extended space of home. Stationary shots lingering upon the architectural detail of the flats are combined with similarly framed images of resonant environmental objects in the surrounding area. For instance, shots of the stairwells and balconies of the flats are edited together with images depicting satellite dishes, CCTV warning signs and telephone wires. This unique approach to cinematic landscape, which draws clear inspiration from the visual arts, effectively captures the grittiness of the inner city environment in all its visceral detail. By suturing together the architectural details of the flats from different perspectives, Derrington dynamically captures the physicality of these spaces and thus presents a challenge to the conventional representations of these iconic working-class environments.

Working-class females often remain voiceless in Irish society. In attempting to render this marginalised population visible, Derrington has the difficult task of negotiating the creative tension between trying to answer the central question of who the ‘pyjama girls’ are versus society’s perception of them. In other words, does the film give an authentic voice to its working-class subjects or simply appropriate their voices in order to challenge ways of thinking about Dublin’s urban space and the divisions wrought by social class? While the documentary’s observational style works towards producing an authentic representation of the girls’ experiences, the film significantly alters their reality at the same time. According to the filmmakers, deliberate choices were made to not feature Lauren’s mother in the documentary and, later in the editing process, to cut out all men from the film. On the thematic level, these omissions facilitated the film’s portrayal of the three generations of Dublin women, the middle generation of which (represented by Lauren’s mother) has been obliterated by drugs. Without a doubt, these editorial decisions powerfully underscore the impact of drugs upon Dublin’s working-class communities, but they also distort the lived reality of the documentary’s subjects and subordinate their individual experiences to the film’s thematic coherence.

Ironically, the class struggle so present in the film became manifested through the ‘need’ to subtitle Tara and Lauren’s working-class accents for the wider Dublin audience. When the film premiered at the IFI’s ‘Stranger Than Fiction’ Documentary Film Festival in April 2010, subtitles were intermittently applied throughout certain sections of the film. The implication that the working-class accents of the documentary’s subjects could not be understood in their own city more saliently underscored the deeply entrenched nature of Dublin’s socio-spatial divisions. Subsequently, in the hopes of international distribution, Still Films took the decision to fully subtitle the film with the result that much of the Dublin vernacular and syntax authentic to working-class identity was glossed into standard English. The subtitling of Pyjama Girls delegitimizes its subjects’ working-class culture, quite literally through the appropriation of their voices, and accommodates their marginalised identities only through the process of bringing them closer to the mainstream. In this sense, Derrington’s attempt to traverse Dublin’s class boundaries through the filmmaking process unwittingly replicates the larger power structures fundamentally implicated in society’s marginalisation of the ‘pyjama girls’.