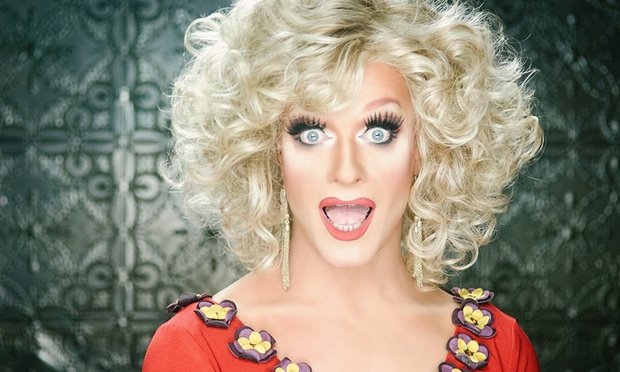 ‘It’s a great day for a social revolution’: Panti, Drag and the Politics of Performance in Conor Horgan’s The Queen of Ireland

Like Panti herself, a self-declared ‘accidental activist’, Conor Horgan’s The Queen of Ireland was partly shaped by the serendipitous coalescence of certain events. When Horgan began filming in 2010, he could not have foreseen Rory O’Neill’s legal row with the public broadcaster, Panti’s Noble Call speech in the Abbey Theatre or Ireland’s resounding yes vote in the 2015 marriage referendum, all emotionally charged events that would provide him with a dramatic and deeply affective ‘third act’. Yet, while there is no doubt that the stars aligned in mysterious ways to produce the unexpected and wonderful story that is The Queen of Ireland, this documentary is also the product of meticulous archival research, a keen awareness of the importance of queer history and a deeply held humanist sensibility. Similarly, Panti’s trajectory from drag queen in Japan to prominent LGBT spokesperson is not merely a tale of happenstance but also a journey shaped by the synthesis of creativity, intellectual curiosity, political activism and hard work. Horgan’s outstanding achievement – like Panti’s – is that he has successfully drawn together the political, the personal and the performative in a way that demonstrates how drag can function as a potent agent of social change.

In 1968, the year of Rory O’Neill’s birth, a documentary called The Queen was released in America. It was a behind-the-scenes insight into a New York drag-queen contest, and it divided the critics, some of whom welcomed it as a sympathetic exposé of the real people behind the caricatures, while others feared that it would do the gay rights movement more harm than good by playing into “flaming queen” stereotypes (Luther Hillman 2011). Drag has long been a central presence in gay culture and politics: drag queens and street queens featured heavily in the 1969 Stonewall rebellion in New York, and have been central to Gay Pride marches all over the world since the 1970s. As Judith Butler has commented, drag is, by its nature, both gender-transgressive and progressive, not only because it highlights the fact that all gender is performance but also because it exposes “the failure of heterosexual regimes ever fully to legislate or contain their own ideals” (Butler 1993: 26). But drag has also been a contested and divisive issue in LGBT politics. As Luther Hillman (2011: 158) notes:

While some liberationists appropriated drag as a symbolic statement against gender norms, others saw drag as exacerbating stereotypes of ‘effeminate’ homosexuality. Still others aligned with radical feminists who saw female impersonation and drag as an affront to women, reinforcing cultural stereotypes of femininity. These debates coalesced into contradictory stances on the political and cultural meanings of drag and drag queens as constituents of gay liberation.

Almost 50 years later, when the prospect of a referendum in Ireland on marriage equality finally came into view, a not entirely different set of tensions emerged in debates within the LGBT community. Those with more conservative leanings readily embraced the idea of marriage, while more radical queer activists feared that conforming to an outmoded, patriarchal institution such as marriage and its attendant investment in procreation, monogamy and the nuclear family would reduce and restrict the possibility of more fluid understandings and articulations of gender, sexuality and the family. Why would anyone want to assimilate a restrictive set of ideals and constructs into queer culture, they – rightly – asked. But besides the practical issues that were at stake regarding people’s rights in relation to children, property inheritance and next-of-kin arrangements, this was seen by almost everyone as a basic human rights issue. And so even those who were ideologically opposed to the institution of marriage got behind the campaign because there was growing consensus that it was, first and foremost, about recognizing all of Ireland’s citizens as equal. LGBT people and their allies, whether they were monogamous, Fine Gael-voting Christians or anarchist, polyamorous BDSMers, understood that persuading the electorate to vote yes would require empathy as its key strategy as well as a certain degree of convincing the nation’s more conservative citizens that LGBT people were the same as everyone else.

One could have been forgiven, therefore, for thinking that transgressive, “flaming queen” queerness might not cut it with the crucial swathe of Middle Ireland who were undecided, and who were ultimately going to swing the vote. Except somehow it did. This is Panti’s most remarkable achievement, and the power of Horgan’s documentary lies precisely in its subtle exploration of how Rory O’Neill’s “giant cartoon woman” alter ego succeeded in getting an older, more traditional Ireland on the side of marriage equality. Clearly, the marriage equality campaign was not championed by Panti alone – it was the result of many years hard work by hundreds of committed activists – but the fact that a glamorous and outspoken drag queen became its key figurehead is remarkable. O’Neill has lived a remarkable life through remarkable times: born in the year of the student riots in Paris, he embodies Ireland’s transformation from a conservative, Catholic state to a modern, secularizing nation. From the murder of Declan Flynn in 1982 through the emergence of HIV and AIDS to Dublin’s burgeoning queer club scene in the 1990s, the decriminalization of homosexuality in 1993 and, finally, marriage equality, Horgan presents a concise but colourful and insightful history of LGBT rights in Ireland through the prism of O’Neill’s life as a performer and activist. O’Neill narrates much of this story in interview and narrative voiceover, allowing us an insight into the intellect, self-reflexivity and humour that have given rise tothe more flamboyant persona that is Panti. As O’Neill comments, Panti allows him to play the role of the clown, the fool, the court jester; to say the unsayable.

Crucially, both Panti and Horgan’s documentary refuse to play into obvious homonormative strategies of tolerance and acceptance. The documentary’s unapologetic celebration of gay life and culture includes stills of risqué nightclub posters from the HAM and GAG club days as well as an anecdote about a fetish club performance in which a string of pearls was secreted in – and ceremoniously removed from – “Panti’s person”. These images and segments sit alongside photos from O’Neill’s 1970s childhood and postcard-type shots of his hometown of Ballinrobe, not to create a montage of striking juxtapositions but rather to imply that these experiences of Ireland are now oddly compatible and harmonious. The glue between the personal and the political, and between Ireland’s rural past and modern present is most effectively rendered, however, through the sparse but powerful presence of O’Neill’s parents throughout this story. Open, warm and unassuming, they are impressively unfazed by the drama that their “fourth daughter” has brought into their lives. O’Neill’s is not a conventional coming out narrative of struggle and eventual coming to terms, therefore, since his parents recognised and accepted his difference from the outset. Over a montage of photos of his early childhood, his smiling mother proudly comments, “He’s his own man”. When O’Neill speaks candidly about discovering he was HIV-positive in 1995, his father talks about how he prayed to Jesus for a solution. However, it is not conventional Catholicism but rather their understated humanism that makes O’Neill’s parents such compelling and inspiring characters in this story.

It is this same humanism that is at the heart of Panti’s potent balance of humour, political activism and righteous anger, and the shows that O’Neill has been doing since 2007, such as In These Shoes, All Dolled Up and High Heels in Low Places, are testimony to the political and affective power of drag. Beneath the ribald anecdotes and self-effacing humour lies a sophisticated theorisation of gender and sexuality. Panti is exceptionally clear about why she dresses as a woman and what it means: she is not pretending to be a woman, nor is she celebrating or appropriating stereotypical (hyper)femininity – she is lampooning the extreme rigidity of gender roles and is using that performative space to expose gender as a cultural code that relies on mimicry and cultural reinforcement, just as drag kings lampoon hypermasculinity by performing as soldiers and sailors. She is conversant with intersectional politics, and sensitive to both the achievements and limitations of second-wave feminism. In this sense, Panti is something of a Trojan Horse, smuggling serious gender-political analysis and queer politics into popular forums in the guise of entertainment, always with a well-measureddose of righteous anger. This becomes especially evident in the marriage referendum segment of the film, when she addresses the crowd at a post-Pride rally as follows: “Any asshole can get married but not you. Any dumbfuck soccer hooligan can get married. Any gay basher on Georges Street at 4am can get married. Any fascist, any murderer, any sex offender can get married. But you cannot…you should be angry about that”.

The Queen of Ireland reaches its emotional crescendo in the unfurling of those extraordinary events that preceded the referendum – Pantigate, the outstanding Noble Call speech in the Abbey theatre and the heady reaction it provoked when it went viral, with supportive tweets sent from Madonna, Martina Navratilova, Stephen Fry, Boy George and Ru Paul – culminating in the victorious day itself. Seeing the footage ofDublin Castle on the 23rd of May is deeply moving, and it is impossible to imagine anyone watching these scenes without crying. But it is the documentary’s final segment – Panti’s return to Ballinrobe to perform in a marquee erected in the car park of the local tyre business – that provides the film’s real tear-jerker finale. Conceived of as a show for O’Neill’s mother, this performance serves as the ultimate narrative reconciliation of queer culture with small-town, rural Ireland. Panti’s walk from the family home to the marquee, flanked by her parents wearing rain jackets and carrying umbrellas, calls to mind (a peculiarly Irish twist on) Mike Silverstein’s comment about the revolutionary power of drag:

When a Street Queen walks down the street, she’s a one-person rebellion, her being an affront and attack on the straight world around her…The Street Queen denies the reality of the whole structure of Masculine-Feminine roles. She refuses to be either a man or a woman, and that is the most profoundly revolutionary act a homosexual can engage in (Silverstein1970, cited in Luther Hillman 2011).

The final scenes, in which O’Neill’s parents laugh hysterically at in-jokes about a local character called Cock Jennings are overlaid with the film’s moving original score, and serve as a poignant affirmation that the world can be changed in astonishing and unexpected ways.

Luther Hillman, Betty. 2011. “‘The most profoundly revolutionary act a homosexual can engage in’: Drag and the Politics of Gender Presentation in the San Francisco Gay Liberation Movement, 1964–1972”, Journal of the History of Sexuality 20(1). 153-81.