by Patricia Coughlan. This text may be archived and redistributed both in electronic form and in hard copy, provided that the author and journal are properly cited and no fee is charged for access. 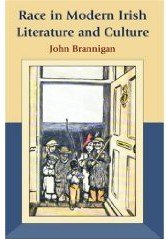 Complex processes have constructed white Irishness, and we are only beginning to understand these. This excellent book is a welcome addition to the slowly-growing literature on this subject. Brannigan’s  premise is that race is and has been a category actively at work in Ireland, at least since the foundation of the State. Specifically, he argues that Irish national identity, as a social formation, always was founded on what are, in effect, recognizable as racial assumptions: this has its roots well before 1922, in Herderian, more or less essentialist, positions about organic identity. From the outset he distinguishes his own project from some influential post-colonialist criticism, noting the partial blindness of the latter to the active workings of racism and racialised perspectives in Irish culture and society from even before the achievement of independent statehood. The racialisation of the Irish has been well elucidated, but scarcely at all that by the Irish: Brannigan adds his enterprise to those already fostering this uncomfortable realization. He questions the idea that “a people secure in their national philosophy”, in Declan Kiberd’s phrase, will thereby be all the more capable of solidarity with ethnic others, but rightly acknowledges a 1990s counter-current within post-colonialist criticism (e.g. Deane, Innes, Lloyd) towards making common cause with other formerly colonized peoples.

The book does not attempt a full, chronological history of Irish representations of race, but rather analyses specific nodes of cultural production and of race-sensitive events and transactions, over eighty years or so, with a short prefatory look at the earlier twentieth century. It draws on the important social-science scholarship on race in Ireland (by Lentin, Garner and others), and internationally by David Theo Goldberg, as well as historians’ elucidation specifically of the numbers, circumstances and experiences of Jews in Ireland and of Irish anti-Semitism. Brannigan’s work is contiguous with that of other recent investigators (e.g. on Travellers, Hayes and Lanters) in the gradual constitution of an anatomy of Irish racisms.

But his own focus, as a literature scholar, is cultural: he reads race as a cultural construct and argues eloquently, and hopefully, that it depends upon the aesthetic sphere for its authority and affective power, and therefore can be resisted by the cultural intervention of alternative and dissident voices. In literature, he discerns and implicitly endorses a moment of critique of the predominant vision of community as “repressively homogeneous and stiflingly insular”. He shows convincingly that the operations of Irish nation- and identity-construction are clearly — and most often oppositionally — revealed in writing (and painting). He analyses literary and theatre texts of varying stature, ranging from Ulysses (a particularly rich and compelling discussion), O’Flaherty, and (briefly) Beckett, through Edna O’Brien, Aidan Higgins and Behan to more minor work including MacDonagh’s 1921 comedy The Irish Jew, fiction by MacManus and Plunkett, and Clarke’s satire “Flight to Africa”; a case-study of Dublin black rock musician Phil Lynott ends the final chapter.

The argument is also sustained by other kinds of documents. Archives include the Harvard physical anthropologists’ mid-’30s phenotypical study of Irish faces, with their disturbing eugenics-inflected implications; there are also fascinating records from the 1922 Paris Congress on the Irish Race, with its speeches by both Yeats brothers, 1925 reports on the State’s first deportation (of a self-styled “Prince of Abyssinia”), and the 1960s government’s dismissive responses to persistent discrimination against African students.

Chapter 2, the longest, is entitled “Face Value”. At its centre is the Harvard study, which curiously combines empirical measurement and positivistic classification of racial types with value-laden assumptions concerning ethnic purity and other social-symbolic meanings. Brannigan appropriately prefaces his discussion of this archival material by recalling that disturbing equation of Irish identity with Western racial hegemony, Yeats’s “The Statues” (“measurement began our might…”). The anthropologists’ findings are placed in the context of facial representations in O’Flaherty, Jack Yeats and Beckett: the latter two robustly reject the notion that the human face can legitimately be read as a racial sign. Particularly good is the tracing of Yeats’s development away from illustrative art (shown at its strongest, and most directly nation-oriented, in the Synge collaborations) towards his mature modernist-expressionist style. This transformed his rendering of the face and perhaps also stripped his Irish faces of ethno-national representativity.

This strategy of contrasting these radical aesthetic and ideological visions with 1930s phenotypical assumptions is highly effective. Brannigan’s reflection on the face in Levinas and Wittgenstein is a little too elliptical and its implications for the overall argument obscure. A more concrete issue this chapter explores well is the warm welcome given the Harvard study by both Free State and Northern governments; Catholic suspicion of eugenics discourses seemed overcome by the flattering attention (in both jurisdictions) of these distinguished scientists and the prospect (congenial, as Brannigan shows, to Free State ideology) of a vindication of Irish ethnic purity.

Derrida argues: “there is no home without the foreigner”: Brannigan’s third chapter analyses the nation-state as constituted by the exclusion of others even while guaranteeing rights to its own citizens, a troubling paradox widely explored in the theoretical literature on racism.A “racialising” State is identified in the developing 1930s-‘40s struggle between ethnos anddemos, where a “civic, modernising nationalism” meets a “recalcitrant” ethnic one with intensifying anxieties about the infiltration by “strangers” of a national character often defined in terms of organic authenticity. In the Free State imaginary, “the foreigner” played a role grotesquely out of proportion to the minuscule numbers of actual foreigners; we see how in these decades, fears of a notional cosmopolitan rootlessness merged with pre-existing hostility to the former colonising power, shadowing the notional ideal of Irish hospitality.

The “alien” is a significant trope in Johnston’s 1932 Moon on the Yellow River; there are effective readings of the challenges posed by female foreigners’ transgressions against bodily containment and regulation, in later fictions (by Kate and Edna O’Brien and John Montague). Higgins, by contrast, rejects the “exotic fantasy of the foreigner as agent of social change” with his sexually predatory, parasitic Otto Beck in Langrishe Go Down. A 1956 Plunkett story about the social marginalisation of a Polish refugee character completes this suite of texts which are said to expose “the figural limits of the nationalist project”. While Brannigan sees an “exhaustion of imaginative and ethical resources” in the mid-century Ireland these fictions represent, he argues that they can themselves be read as contesting such limits and such exhaustion.

Chapter 4 argues that 1960s-‘70s Ireland evinces continuing “prescribed” racial figurations which hinder the recognition of heterogeneity. While Behan’s Richard’s Cork Leg stages a black character who might be meant to “dislodge fixed identifications”, his blackness is an unstable trope, skirting stereotype, and 1972 reviewers were underwhelmed, as also by Desmond Forristal’s 1974 debate-play about missionaries and Nigeria, which revealed the ambivalence of Irish gestures towards cross-racial solidarity. The discussion here is more sketchy and is unavoidably foreshortened by the as-yet-unfolding impact of multi-cultural in-migration. Clare Boylan’s Black Baby (1988) and Donal O’Kelly’s Asylum! Asylum! (1994) broke new ground in examining Irish welcomes from the perspective of racialised “others”, but before the concrete reality of such others’ presence. Brannigan ends by reiterating the key role of race within the “social glue of the nation-state”. He also restates his governing imperative: that Ireland must find ways to imagine community and integration “beyond the terms of national or racial affiliation”. On the other hand he reads, in Irish culture’s recurring expressions of radical doubt  —  from Joyce onwards  —  about the “ideological legacies of nationalism” and “the validity and efficacy of racial ideologies”, signs of hope.