Reflections on the European Sports Film The Racer (2020)

Reflections on the European Sports Film The Racer (2020)

by Seán Crosson. This text may be archived and redistributed both in electronic form and in hard copy, provided that the author and journal are properly cited and no fee is charged for access. 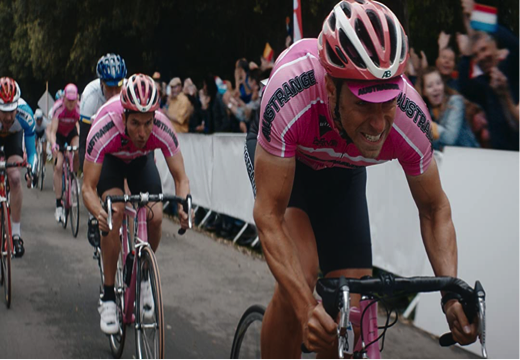 Reflections on the European Sports Film

Sport cinema is not the first genre that one would associate with Irish fiction film (or any other European film culture for that matter) given the popularity of other genres, including melodrama, romantic comedy and the gangster genre in recent decades. However, while Hollywood has largely defined and popularised the genre, sport has featured prominently in the European context, including some notable Irish productions (Clash of the Ash (1987), The Boxer (1997), Studs (2006)). European sport cinema now includes both acclaimed works, from Rocco e i suoi fratelli (Rocco and His Brothers, 1960), This Sporting Life (1962), and Boxer a smrť (The Boxer and Death, 1962), to distinctive national sub-genres such as Spanish ‘Kick Flicks’ (Ashton 2013). Furthermore, European Sport cinema has proven on occasion to be remarkably popular in specific contexts with indigenous productions breaking local box office records, including in Norway (Flåklypa Grand Prix (Pinchcliffe Grand Prix) (1975)), Russia (Движение вверх (Going Vertical (AKA Three Seconds) (2017)), and Spain (Campeones (Champions) (2018). As I have discussed previously (Crosson 2021), European sport cinema has historically been primarily national in both its focus and reception and in some contexts, as in Nazi Germany or Franco’s Spain, this has involved the employment of sport on film to affirm and promote hegemonic and exclusionary constructions of national identity. However, the advent of the European Economic Community in 1957 (and the European Union (EU) in 1993) and the establishment of a range of European international co-production and film funding initiatives – including Eurimages (established by the Council of Europe in 1989) and the EU’s own MEDIA Programme (1991) – has encouraged and facilitated the increasing importance of coproduction partnerships in the production of European films, including sport cinema, accounting now for approximately 20% of relevant productions (Crosson, 2019). While more research is needed of these productions and the phenomenon more generally of European co-productions, this increasingly transnational production context does appear to be impacting upon the content of relevant productions with the narrower more nationalistic sentiments apparent in an early period less evident. In its place we find rather an increasing focus on international and inter-cultural concerns and encounters, including in some of the most commercially successful European sports films of recent years (e.g. Bend it It Like Beckham (UK/Germany/USA, 2002), Sixty Six (France/ UK, 2006), Looking for Eric (UK/ France/ Belgium/ Italy/ Spain, 2009), The Keeper (UK/ Germany, 2018).

This focus on the European context in discussing Kieron J. Walsh The Racer (2020) is necessary not just to place the production in relation to previous relevant sport cinema texts, but also because the film is above all defined and distinguished by its Europeanness. That it has an Irish director and co-producer (Blinder Films which has specialised in international co-productions) and is set in Ireland is secondary to this crucial aspect. This is already suggested from the early and unmissable Eurimages logo that fills the screen and precedes the film’s title and the following logos for international entertainment company Caviar Films (with offices in Los Angeles, London, Brussels, Paris and Madrid), and French producer Jesus Gonzalez-Elvira’s Luxembourg-based Calach Films. In other respects, the film follows the familiar trajectory found in the majority of sport film texts of the underdog (usually male) athlete who attempts to overcome, (at least temporarily), considerable personal and professional challenges through the achievement of some degree of sporting success. Here, the focus is on domestique Dominique Chabol (Louis Talpe) who at 38 is riding what is likely to be his last Tour de France (an ongoing anxiety) in the rather thankless role of a support rider to the team leader, in this case the arrogant and unstable Italian, Stefano Drago (Timo Wagner). There is also the inevitable love interest, though the underdeveloped role of race doctor Lynn Brennan (Tara Lee) and her relationship with Chabol is a particularly risible example of this trope. The film’s largely fictionalised narrative is (as has often featured again previously in the genre) placed in relation to an actual sporting moment, in this case the opening stages to the 1998 Tour which took place in Ireland. Cue ample opportunities to foreground further familiar tropes, including shots of the extraordinary Irish landscape (which riding through the Wicklow mountains facilitates), Irish music, Irish dancing, the Irish pub (and its quirky array of characters) and (God help us) boyzone.

The initial Tour stages in Ireland were undoubtedly noteworthy at the time, particularly for Irish people who recall those days (as I do) as heady times indeed, and perhaps a final moment of national excitement (and innocence) in Ireland’s extraordinary engagement with Le Tour which reached its peak in the previous decade with the successes of both Sean Kelly and Stephen Roche (a winner of the Tour de France in 1987). Roche was central (along with then President of the UCI Road Commission Pat McQuaid) in bringing the race to Ireland. However, the ‘98 Tour is most remembered today for bringing the use of banned substances by riders (including allegedly Roche during his career (O’Donovan, 2004)) to international attention. Three days prior to the start, Team Festina’s soigneur (masseur) Willy Voet was discovered by customs officials at the Belgian border carrying large quantities of controlled substances (including erythropoietin (EPO), growth hormones, testosterone and amphetamines) and syringes in his car and this event arguably overshadowed for many the events in the race itself. Though no riders were found doping during the race, this was more a reflection of the inadequate testing regime in place at the time than actuality on the ground.

A comparable “Willy Voet moment” is briefly mentioned in The Racer, though referred to as “Settosa’s soigneur […] Manni Torche”; here as elsewhere in the film actual team names and individuals featured in the 1998 Tour are fictionalised (understandably given the depiction of drug-use in the sport). However, the central role of a soigneur in providing banned substances to team riders is foregrounded through the central character of team Austrange’s (for which Chabol rides) soigneur “Sonny” McElhone (Iain Glen). The film chronicles in some detail this aspect of cycling in the period concerned, particularly in its detailed depiction of Sonny’s work with team riders in preparing and delivering their performance enhancing cocktails. There are also suggestions of the devastating physical impact these substances had on the riders concerned; Chabol’s heart almost stops while sleeping on several occasions due to his extraordinarily low resting heart rate as a consequence of EPO use. There is also a rather pessimistic view offered of the use of such substances in the sport; the one young rider who refuses to do so – French rookie Lionel Dardonne (Warm Kerremans) who insists on riding “clean” – is essentially blacklisted and attacked by other team members. Chabol himself ultimately decides to continue to use these substances, winning a stage in Ireland, and travelling with the other riders to France for subsequent stages, despite his threat to leave his team and the race in disgust at these practices.

However, none of these sequences bring anything new to the depiction of cycling – the abuses in the sport have by now been well chronicled including in former Irish Pro cyclist Paul Kimmage’s fascinating and revelatory Rough Ride (initially published in 1990), a brutally honest and excoriating account of the Tour and the widespread (and seemingly accepted) practice of doping in the 1980s. The past year also saw the release of a further relevant cycling documentary (one of many now available on the subject), the ESPN production Lance directed by Marina Zenovich, which focuses on the most corrupt exploiter of banned substances, Lance Armstrong. Armstrong was also the subject of Stephen Frear’s much superior 2015 feature The Program (a further, in this case French/British, coproduction), which also included much more detailed and impressive sequences of cycling than apparent in the rather short (if competently realised) cycling scenes in The Racer.

What is most distinctive here, however, is The Racer’s foregrounding of its Europeanness. This is most obviously apparent in the range of nationalities featured in the film, including Belgian, Scottish, English, Portuguese, Italian, French, Luxembourger, and Irish, while Chabol’s team also features a New Zealand rider. However a further still more unusual feature (as regards sports cinema) is the diverse use of language: Chabol is (at least) trilingual, moving between French and English with team members, and speaking his native Flemish in conversations over the phone with his sister regarding his father’s passing, just prior to the start of the Tour. Other languages featured include Italian, and (briefly) Spanish and Portuguese – even Irish has its moment as we hear the Aer Lingus pilot share his ‘cúpla focal’ as the plane carrying the riders to Ireland makes its final descent. Language and multilingualism was a founding principle of the EU and have been a key concern throughout its history, evident in its recognition (and facilitation at considerable expense) today of 24 official working languages. This is, indeed, a striking and commendable feature of The Racer, in its foregrounding of linguistic diversity with lengthy non-English speaking sequences in a variety of languages in a genre that is not renowned for this practice. It reflects broader concerns with foregrounding international and intercultural encounters within European co-produced sport cinema. However, in its reliance on familiar signifiers of both genre and place, The Racer may also speak to one of the biggest challenges of both European co-productions and perhaps the European project itself; how to define itself as a distinctive and engaging shared cultural experience for both audiences and citizens.

1I want to acknowledge the as always insightful advice and feedback of Dr Tony Tracy in preparing this review. I am grateful to Tony also for his invitation (some 15 years ago!) to contribute to this important annual review of Irish cinema, which he initiated, and which has become a critical resource for all of us engaged with the topic.