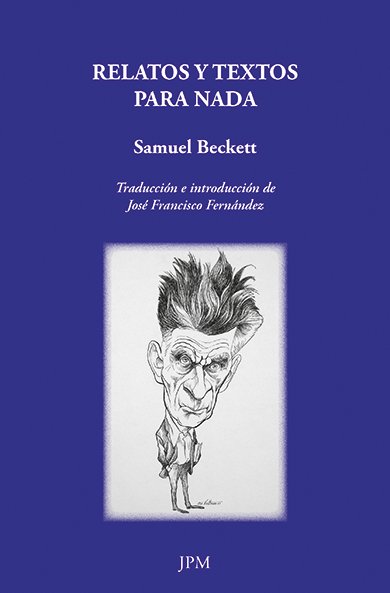 Stories and Texts for Nothing (1967) has its origin in an exceptional moment in literary history, one that has provided us with some of the major texts of 20th century literature: Samuel Beckett’s ‘siege in the room’, the period of frenetic writing activity that he spent when he returned to Paris in 1946. It was at this stage of his literary career that Beckett took the crucial decision of abandoning the English language in favour of French, and that he wrote the story “Premier Amour” (1970), the novel Mercier et Camier (1970), the plays En attendant Godot (1952) and Eleuthéria (1995), and the three novels that make up his famous Trilogy: Molloy (1951), Malone meurt (1951) and L’Innommable (1953). He also wrote the texts included in the collection under review here: the stories “La fin” (1946), “L’expulsé” (1947), and “Le calmant” (1955), and Textes pour rien (1955), thirteen numbered short prose pieces.

Beckett’s adoption of French implied a radical transformation of his writing style, with the erudition, exuberance and stylistic virtuosity of his first texts giving place to an austere, restrained and minimalist linguistic expression. It is probably in this sense that we should understand Beckett’s famous assertion that “in French it’s easier to write without style” (Perloff 1990: 162). Beckett’s association of French with “weakness” and “asceticism”, as opposed to “the temptation to rhetoric and virtuosity” that he found in the English language (Cronin 1996: 360), certainly permeates his post-1946 French texts, as well as the translations into English of those texts that he himself carried out, and on which José Francisco Fernández has based the present translation. Hence, the main strength of this translation – the indispensable condition without which it would have been a failure, and which turns it into an undeniable success instead – is the way it preserves the simplicity and precision in the use of the language that Beckett no doubt saw as an essential dimension of Stories and Texts for Nothing.

As regards the composition and publication process of these literary works, the stories “La fin” and “L’expulsé” came to light in different journals in 1946 and 1947 respectively. Together with “Le calmant”, their revised versions were included in Nouvelles et Textes pour rien (Minuit, 1955). The English translations – carried out by Beckett himself, with the collaboration of Richard Seaver in the first two –, with the titles “The End”, “The Calmative” and “The Expelled”, were subsequently published in 1954, 1962 and 1967. In 1967, the three stories came to light in America within Stories and Texts for Nothing (Grove) and in England within No’s Knife: Collected Shorter Prose, 1945-1966 (Calder).1 These two collections included the first English translation of Textes pour rien, which had been written in French between 1950 and 1951. As for the reception of these texts in Spain, most of Beckett’s works were translated from French into Spanish towards the end of the 60’s and beginning of the 70’s, and the Stories and Texts for Nothing constitute no exception. Thus, the Nouvelles were first translated in 1970 from French into Spanish by Álvaro del Amo for Tusquets, whereas Ana María Moix translated Textes pour rien also for Tusquets, in 1971. Both of them have had subsequent editions. Surprisingly enough, this is the first time that these texts are translated from their English version into the Spanish language.

The late arrival of this much wanted translation must be partly due to the neglect that, as Gontarski has pointed out, Beckett’s short fiction has tended to suffer from (1995: xi), both in terms of Beckett’s canon and of the short story tradition in general. Beckett’s stories, however, will provide the reader with an excellent introduction into the new kind of narrative that the Irish writer produced after his turn to French. Together with the stylistic qualities discussed above, the three stories, as Kenner explains, are the first texts by Beckett to incorporate the dimension that was going to become central in his later narrative: “the uncertainties of the first person” (1973: 116). Certainly, the use of the monologue as technique of narrative representation entailed that “the narrator’s inability to describe and account for himself” became “the central dilemma” in Beckett’s writing (Pattie 2000: 63). The stories also meant the definite consolidation of the vagrant figure as the protagonist of Beckett’s texts. Thus, in “The Expelled” – “El expulsado” – an unnamed character is thrown out of his house and undertakes the search for new lodgings. “The Calmative” – “El calmante” – begins with the famous line “I don’t know when I died”, and from that post-mortem point tells the story of a voyage through countryside and town. The protagonist of “The End” – “El fin” – is also expelled from what looks like a charitable institution and, after meeting a variety of characters and situations, seems to resign himself to ebb life away.

In his translation, Fernández perfectly conveys the impression of stylistic simplicity, realistic atmosphere and narrative straightforwardness that Beckett permeated these stories with, as we see in the following passage from “El fin”:

The sentence in which the narrator wonders about the temporality of those events, thus putting the reliability of his account into question, is an example of the many self-doubts, contradictions and speculations which pervade these stories, and whose semantic undecidability Fernández is faithful to. In this way, the apparent realism gives way to a dreamlike world that is ultimately unknowable and inscrutable, full of events that remain unexplained. This goes together with a failure to construct a fully coherent identity, and an inability to establish a meaningful relation with the world, manifested in a radical mismatch between story and life, as we see at the end of “El expulsado” – “No sé por qué he contado esta historia. Bien podría haber contado otra cualquiera. Quizá algún día pueda contar otra. Ya veréis, criaturas, lo mucho que se parecen” (2015: 33) – or in the final lines of “El fin”: “Me vino una memoria borrosa y fría de la historia que podía haber contado, una historia a semejanza de mi vida, quiero decir, sin el coraje de acabar ni la fuerza de seguir” (2015: 75).

Nonetheless, in spite of its narrative and representative uncertainties, the ‘I’ of the stories “remains more or less … psychologically and narratologically whole” and “something like representable external reality still exists,” even if it is “inseparable from the consciousness perceiving it” (Gontarski 1995: xxiv-xxv). This partial psychological wholeness and this notion of a representable external reality completely disappear in Texts for Nothing. What has taken place between them? The Trilogy. After finishing The Unnamable, Beckett found himself in a creative impasse that he tried to overcome through the writing of Texts for Nothing. As he explained in 1956, “the very last thing I wrote – ‘Textes pour rien’ – was an attempt to get out of the attitude of disintegration, but it failed” (Shenker 1999: 148). Disintegration, then, understood in multiple ways – psychological, existential, narrative, linguistic – is the key feature of Texts for Nothing, which are a major leap beyond the Stories and which continue the trend begun in Molloy, Malone Dies and The Unnamable. As Gontarski points out, in The Trilogy, Beckett replaces external reality and literary characters by “something like naked consciousness” and “a plethora of voices”, elements that are kept in Texts for Nothing, which should not be seen as “‘completed’ stories but shards, aperçus of a continuous unfolding narrative, glimpses at a never to be complete being (narrative)” (1995: xxv).

But in a way, the Texts for Nothing – Textos para nada – go even beyond the Trilogy. Whereas in the three novels, there is at least the sense of “progressive disembodiment”, thus conforming to “the oldest pattern of story-telling, the voyage or quest” (Abbott 1994: 106), linear continuity is totally absent in Texts for Nothing, pervaded by an overwhelming sense of narrative inertia and paralysis, provoked by incessant aporia and paradox:

The translation of a text that does not offer any of the conventional formal and thematic handles is never easy. Fernández, however, is fully successful, as he replicates Beckett’s paratactic and irregular syntax in order to convey the meditative mood of a narrator unable to present itself as a stable or unified subject; thrown into a meaningless void with no ontological supports; unable to go silent, but also to tell a coherent story:

As critics have pointed out, Beckett’s post-1946 narrative was deeply affected by his experiences during the war in France. In this collection, the reader will encounter texts that have been largely neglected, but which are essential in order to get a sense of the way in which the terror and pain of existence were translated into the linguistic texture of Beckett’s later narrative. Besides, the reader will find useful orientation in Fernández’s brief but informed introduction, which gives the main clues needed to contextualise and understand these baffling and singular texts.

With the translation of this collection, and after having published Sueño con mujeres que ni fu ni fa (Tusquets, 2011, with Miguel Martínez-Lage) and Mercier y Camier (Confluencias, 2013), Fernández, one of the most important Spanish Beckettian scholars, consolidates himself as an expert translator of Beckett’s work. His contributions, furthermore, are being vital in covering important gaps in the reception of Beckett’s texts in Spain. One can only hope, then, that he will soon surprise us with another Beckettian story, a “farrago of silence and words, of silence that is not silence and barely murmured words”.

Abbott, H. Porter. 1994. “Beginning Again: The Post-Narrative Art of Texts for Nothing and How It Is”. The Cambridge Companion to Beckett. Cambridge: Cambridge UP. 106-23.