by Niamh Kirk. This text may be archived and redistributed both in electronic form and in hard copy, provided that the author and journal are properly cited and no fee is charged for access. 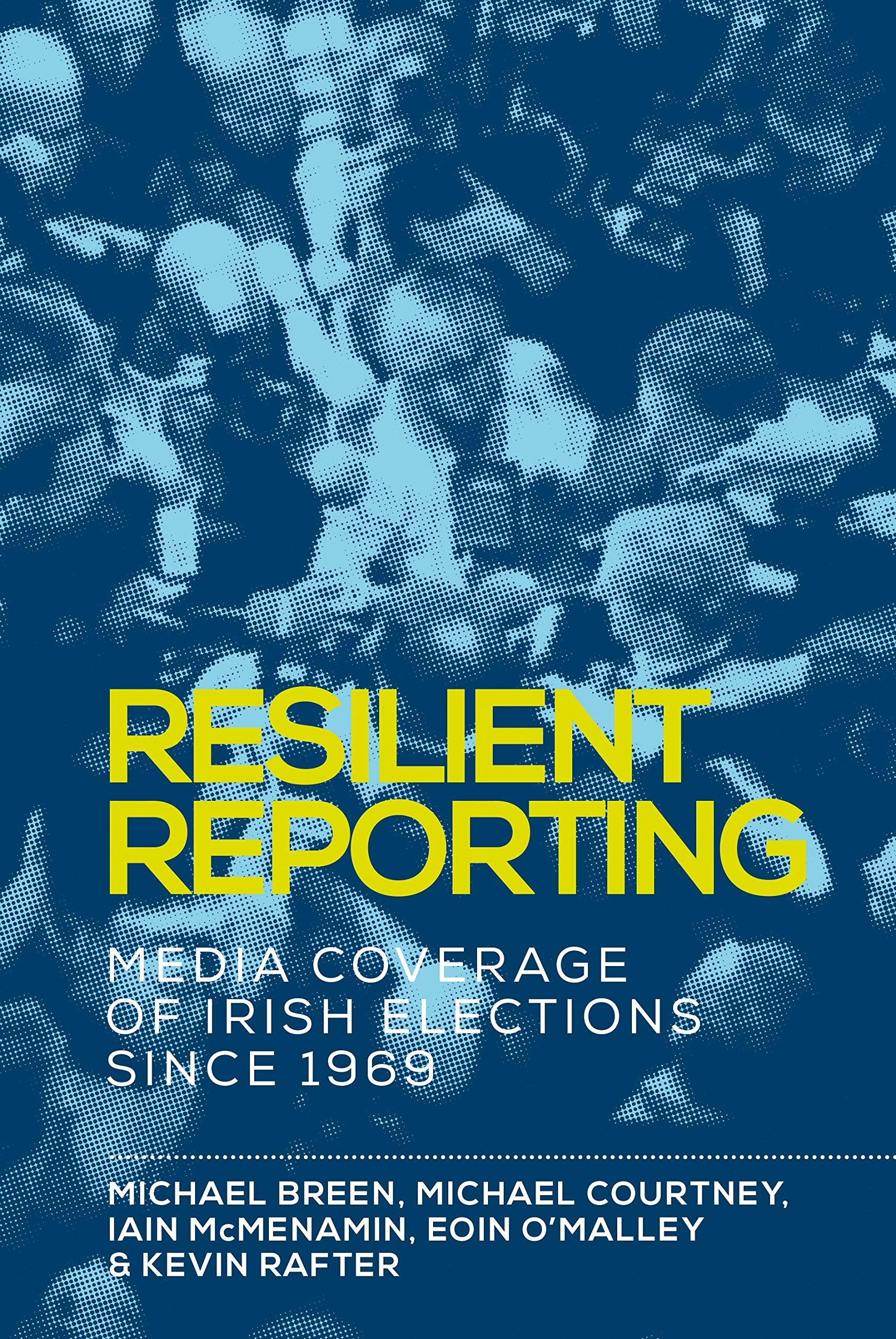 Resilient Reporting is an examination of election news coverage in Ireland since the mid-twentieth century, revealing a shift in the approach to electoral and political journalism. It inspects the character of election coverage across a number of key areas by establishing the evolution of the Irish media system, media responses to political developments, the role of the economy, gender biases, political party leaders and the personalisation of politics, commercialisation of election coverage, and finally, economic crisis coverage.

Three broad hypotheses are addressed throughout this book. Firstly, it questions the extent to which the norms of critical impartiality are sustained over time. Secondly, it examines the degree of shift towards hypercritical infotainment. And thirdly, it questions how exogenous factors have reshaped election reporting in Ireland. The title of the book is fitting given the core finding that in the evolution of Irish journalism, election coverage has largely remained resilient in a critical approach despite the changes in the wider system and potential for a shift towards “infotainment”.

This book provides a comprehensive review of the coverage of Irish politics in the main Irish news sources over fifty years. The longitudinal approach provides a critical insight into political news reporting by charting transformative developments in Irish news media while identifying the retention of core journalistic values over a long period of time.

Taking a computational approach to the analysis of framing, tone and distribution of coverage across several key issues, it uses a substantial dataset consisting of some twenty-five million words derived from a large sample taken from across newspapers, radio and television. As well as comparing political coverage it also compares mediums, online to TV and radio, to establish if changes may be happening in one sector more so than another.

The underlying investigation throughout this book is the evolution of Irish political and electoral news coverage and asks whether critical impartiality is a norm or whether election journalism has succumbed to hypercritical infotainment as it has elsewhere. Furthermore, it examines the extent to which exogenous factors, such as changes in the media system, professional norms and technology, have reshaped election reporting in Ireland.

It argues that there was a reduction of partisanship coverage in Irish media since the 1960s which is shaped by wider changes in the social context and professional norms resulting in a shift towards what the authors describe as “critical impartiality”. The core of the shift, they argue, is a move away from reverence reporting on political and religious authorities, to engaging in debates, nuanced coverage and accountability.

While arguing that election coverage in Ireland more recently has retained a critical and nuanced approach that values critical analysis reporting, it finds that there is overt negative coverage of Sinn Féin. In this instance it questions the legitimacy of such coverage and suggests that this is an area where Irish reporting, to some extent, fails to meet its own standards.

The team behind Resilient Reporting largely come from the Departments of Law and Government (Iain McMenamin, Eoin O’Malley and Michael Breen) and Communications (Kevin Rafter) at Dublin City University, Ireland, working with statistician Michael Courtney. The authors bring a wealth of experience to the topic and the collaborative, interdisciplinary approach renders a comprehensive and innovative review of the coverage of Irish politics.

This book would be of benefit to scholars of political communication, Irish journalism, history of Irish media and more broadly anyone comparing media systems. Because the chapters are thematically grouped into the key factors that might shape election coverage, such as commercialisation and gender, this book would also be of benefit to scholars in economics and sociology.

The introductory chapter situates the broad theoretical approach to media systems, arguing that Hallin and Mancini’s (2004) concept of media systems is a dynamic path-dependent approach whereby evolutions in any one of the three institutions that make up a media system can create a domino effect that changes the others. The core theoretical hypothesis of this book is outlined here. It asks if the evolution of Irish election coverage within the liberal media system over time resulted in a shift from critical impartiality to include hypercritical infotainment, with exogenous factors running in parallel shaping developments.

Chapter two offers an outline of the evolution of the political and media landscapes in Ireland over the past fifty years. It tracks i) developments in party politics, such as the emergence of a consensus system; ii) the emergence of new parties and their impact on the political ecosystem; iii) the recent economic context; and iv) social changes that anticipate an impact on media coverage, including lessened gender bias and less deference to former authorities such as the church. It describes some of the developments in the Irish media system, including the impact of advancements in communications technology and commercialisation.

Chapter four turns attention to the third of the book’s core ideas, the exogenous factors shaping election coverage. This chapter addresses the influence of the economy on election coverage. Perhaps unsurprisingly it finds poor government performance in the economy results in more negative coverage in election news. However, somewhat surprisingly, positive government performance does not generate more positive coverage but rather has no effect.

Continuing the examination of exogenous factors, chapter five looks at gender in election coverage, noting that there is a gender bias in Irish politics with men “severely over-represented in the executive and legislature” (76). It argues that previous election coverage of female candidates was less focused on the “political” although more positive in tone than today. Over time this tone shifted and by 2016 little difference in sentiment between the genders is found in election coverage. Although, it does stress that female candidates were under-reported on in comparison to their male counterparts in the 2016 General Election.

Chapter seven addresses the commercial interests of newstitles and election coverage. It questions whether the more vulnerable a newstitle is to commercial decline would induce more negativity in election coverage. It finds no association between the two nor any association between an increase in competition framing in relation to market vulnerability.

Chapter eight looks to the issue of the economic and financial crises, focusing on the 2011 election. It asks, “When does poor economic performance become a crisis, and what are the implications of a crisis for media coverage?” (128) and shows that the economic crises at the time shaped changes in framing of the election over the course of the campaign, with the news media shifting focus to economic policy issues.

The final chapter concludes with the argument that there has been little shift in Irish coverage of elections towards a hypercritical infotainment style and has largely maintained a critical impartial approach despite evolution in the commercialisation of news media, and changes in the profession of journalism and public attitudes towards it. This underlines the theme carried in the title of the book, that Irish political election news is resilient to the potential detrimental effects of profound changes within and outside of the Irish media system.

Additionally, it includes comprehensive appendixes about Irish elections since 1969 and the data and methodology which are useful in themselves for understanding the context of Irish elections and election coverage as well as the innovative methodological approach that applies a series of computational methods to answer the main and operational research questions.

The authors provide clear descriptions of their computational methodological approaches noting some of the limitations. The sample from 1969–2016 is focused on two main news titles, the Irish Independent and the Irish Times in this regard, some of the analysis focuses on elite media. However, this is mitigated by the more comprehensive analysis of the more recent 2016 elections, which includes a wide range of traditional and new media. So, while offering insight into developments in elite legacy media historically, it provides a comprehensive depiction in the contemporary state of political coverage.

Resilient Reporting offers a welcome insight into the mediation of political and electoral developments in Ireland that also identifies what content was in circulation among the Irish electorate at various phases of evolution and how key internal and external factors influenced journalism. The longitudinal approach offers an important view of the evolution of election coverage including the representation of political parties, leaders and critical policy issues. Similarly, the comprehensive approach to the 2016 election provides an important analysis of the current nature of coverage and what shapes it.

This book underlines how guiding ethical and professional principles in Irish media have prevented the degradation of political journalism during elections. Despite all the internal and external factors that could have transformed or compromised the Irish political news system, it has largely retained its integrity. This is an important and substantial contribution to scholarship in Irish journalism studies and Irish political studies.