by Rosa González-Casademont. This text may be archived and redistributed both in electronic form and in hard copy, provided that the author and journal are properly cited and no fee is charged for access. 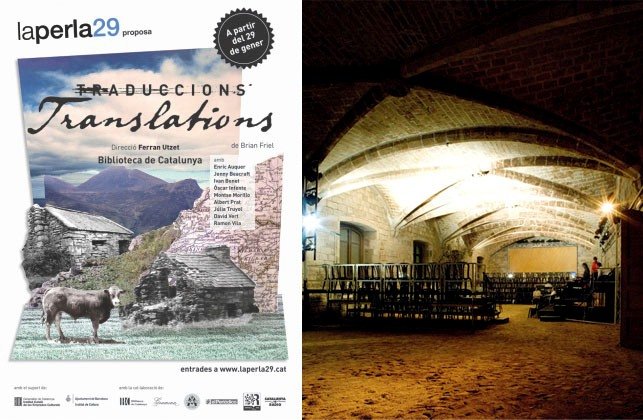 As announced in last year’s section of Irish Studies in Spain, a production of Brian Friel’s Translations, translated into Catalan, opened in January 2014 at the National Library of Catalonia (Barcelona). Under the direction of Ferran Utzet, who had made his directorial commercial debut in 2011 in the same venue with an acclaimed production in Catalan of Conor McPherson’s The Weir, Friel’s play has been rendered literally as Traduccions. Following a six-week-run in Barcelona, the production toured to seven towns (Badalona, Girona, Manacor, Cerdanyola, Vilafranca, Sant Cugat, El Prat de Llobregat) from September 27th–November 30th 2014.

As documented by Maria Gaviña in the chapter devoted to the reception of Friel’s work in Spain in her 2011 book Érase una vez Ballybeg. La obra dramática de Brian Friel y su repercussion en España (reviewed by Teresa Caneda in this issue), Translations is (quite understandably) the play by Friel which has awakened more interest in Spain, particularly in the Basque Country and Catalonia, two autonomous communities where Spanish is co-official with their respective native languages.

In March 1988, eight years after its historic première in Derry, Translations had a four-day-run in the Basque town of San Sebastian, followed by a one-year tour across the Basque Country. The production, entitled Agur, Eire … agur  [Good Bye, Eire … Good Bye) was directed by Catalan director Pere Planella, and had two versions, one in Spanish (translated by Teresa Calo) and the other bilingual, using Basque (translated by Iñaki Alberdi and Julia Marín) for the Irish characters and Spanish for the English sappers.

In Catalonia, despite a fine, though relatively unknown, translation made in 1984 by Josep Maria Balanyà (See Gaviña 2011) there was no staging of the play until the Abbey Theatre’s  2001 European tour took Ben Barnes’ production (with subtitles in Catalan) to the recently opened TNC (National Theatre of Catalonia) for four days. By then, Catalan audiences were already familiar with the playwright thanks to a notably successful production of Dancing at Lughnasa [Dansa d’agost (1993, directed by Pere Planella and translated by Guillem-Jordi Graells)], to which were later added the titles Faith Healer [El fantàstic Francis Hardy (2004, dir. Xicu Massó, transl. Ernest Riera)], Molly Sweeney (2011, dir. Miquel Górriz,  transl. Jordi Fité) and Afterplay (2013, dir. Imma Colomer, transl. Jordi Fité).

Whilst Translations was not Friel’s visiting card in Catalonia, the 2014 staging reviewed here has certainly been his most acclaimed. This may be partly due to extra-theatrical factors, in particular a socio-political juncture which has intensified the centrality of language in Catalan culture. Indeed, whereas the link between language and identity has always been strong, the notion of Catalan as the main identity marker has been foregrounded in the wake of the central government’s recent offensive against Catalonia’s educational linguistic model.

The so-called language immersion method, a learning technique that incorporated Spanish and Catalan but used the ‘minoritised’ language (in this case Catalan) as the main medium of classroom instruction, had been introduced in 1983 with a view to normalizing this language after its prolonged proscription from the public realm during the Francoist dictatorship (1939-1975). Despite occasional and unsubstantiated claims that the systems of normalization and language immersion were a means to turn the newly established Autonomy of Catalonia into a monolingual community, this is far from the case for, being “enrichment-oriented” (Fishman 1976: 36) models, they have fostered bilingualism. This is testified to by several student assessment and literacy surveys which reveal that pupils end their compulsory education with a similar level in Catalan and Spanish (Badia 2010: 21), that almost three million people whose first language was not Catalan are able to speak it now, and that at present 50.7% of the population over 15 use Spanish as their habitual language, 36.3%  use Catalan and 6.8 use both Spanish and Catalan (Generalitat de Catalunya 2013: 6). Thus, rather than acting as a divisive force, the educational linguistic model has contributed to social cohesion in a society which features a large number of immigrants with different language backgrounds.1

Traduccions has undoubtedly invited current audiences to draw comparisons with the linguistic question in Catalonia, but the reception of this production has encompassed other central issues probed by Friel’s play, such as its dramatization of “tradition and progress. Adaptation or resistance” (Ferré  2014) as well as the fact that, as pointed out by director Utzet, Translations addresses the irruption of violence, subtly describing how it emerges “almost by accident out of a very tense situation” (Zaballa 2014), a point taken up by another reviewer who perceptively observes that whereas in the play “violence is generated by the less educated ones … the victims are those who might become links in the act of cultural recovery” (Bordes 2014: 38).

I would even venture to say that the play’s (exaggerated) depiction of the supposedly uncouth Irish characters as fluent in Irish, Latin, Greek (and English in the case of Hugh and his sons) is another potential asset for Catalan audiences aggrieved by derogatory opinions, voiced through some sections of the Spanish media, which qualify Catalan culture and society as inward-looking and narrowly provincial, a view which contrasts sharply with their self-image as a cultured, dynamic society with a cosmopolitan outlook.

Ultimately, though, one would like to think that the impact of Traduccions rests above all on the merits of Friel’s text, ably rendered into Catalan by award-winning translator Joan Sallent, and by a fine production, featuring a generally competent cast of nine actors.

Utzet’s production, set in the Gothic hall of the National Library of Catalonia, a 15th century building formerly occupied by a hospital, where the audience sits a few yards from the stage, places us in the back yard of a rural school bathed in ochre shades, a manger-like setting whose bucolic quality is abruptly broken by tragedy (Bordes 2014). The performance lasts two hours and 45 minutes including the interval, a considerable duration for a play that is driven by the characters’ speeches rather than by action. This length is due to the presence of two different elements added to the original: a narrator who provides the non-Irish audience with information about the Irish context at both ends of the performance, and music that enlivens the increasingly gloomy mood of the play. The narrator delivers most of Friel’s stage directions (about the period, the hedge school and the characters) at the beginning, and then, at the end of Act Three, he intersperses Hugh’s broken recitation from the Aeneid with the following summary of the fate of the Irish language:

Some summers later, after laying waste all the crops in the country, the potato blight will finally reach Baile Beag.There will be migrations, whole villages will disappear. In 25 years the Irish population will decrease from eight to four million. People will remember these years as An Gorta Mór, the Great Famine. The Irish will still have to fight a war against the English, and a civil war. Eventually, in 1937 they will achieve their independence. English, though, will have replaced Gaelic as the first language of the island. Towards the end of the 20th century little more than 30% of Irish people will understand or will be able to read Irish and only 3% will use it as their first language (My translation).

The performance then concludes with “The Wild Rover” sung by American actress Jenny Beacraft (Sarah in the play), accompanied by the rest of the company. Further than this and the reel specified in Friel’s stage directions for the brief interval between the first and second scene of Act Two, (during which the Catalan production keeps Owen, Yolland and Maire on the stage in a lively drunken scene in which Owen mockingly tells Maire to keep an eye on Yolland because “the English can’t hold their alcohol”), there are three more instances of musical insertions: The Dubliners’ “Oró Sé do Bheotha obholle” [Welcome Home] at the end of Act One, after Hugh’s words of hospitality “Gentlemen – welcome” to Lancey and Yolland; Eddie Vedder’s soundtrack for the film Into the Wild (Sean Penn 2007) “Guaranteed” at end of the love scene between Maire and Yolland, and this is followed by actress Beacraft’s rendition of the ballad of the ’98 Rising “The Wind that Shakes the Barley” at the beginning of Act 3.

On the other hand, there are a few minor omissions, mostly of culturally-specific references that were probably deemed to be unfamiliar to a foreign audience. Thus, part of Captain Lancey’s reading from the white document about the military occupation of British colonisation has been cut down (“All former surveys of Ireland originated in forfeiture …”), as has the allusion to Daniel O’Connell’s use of Irish just “when he’s travelling around scrounging votes … and sleeping with married women”. Other references are reworded with a view to making them more accessible: when Maire says to Manus “The passage money came last Friday” in the Catalan version this is rendered as “last Friday I received a letter from Brooklyn; my brother says he’s found a job”; and  when Hugh asks the whereabouts of Sean Beag, instead of Manus’ original answer (“he’s at the salmon”) we get “he had to leave, he had a family affair”.  Adding  “English soldiers” to a passing reference to “the Red Coats” or substituting “Hibernophile” with “irlandòfil” [Irishphile] are other minor changes that contribute to making culturally-specific details more accessible. The substitution of William Wordsworth with George Gordon Byron as the romantic poet who lived close to Yolland, though, seems less justifiable, since both writers are equally well known in Spain.

Last but not least, Joan Sallent’s version of Translations passes with flying colours the linguistic challenge that Friel poses on the credulity of the audience and becomes a solid asset of the production. As the translator himself has said, he faced a double challenge and decided to rule out not only “the temptation to transfer the conflict to the situation in Catalonia so that some characters would speak in Catalan and others in Spanish, [but also] the option of making the Irish characters speak a clearly identifiable dialectal variant of Catalan (as spoken in Mallorca for instance) and the English ones to speak the standard peninsular form, for this would have worked as a distracting element” (my translation) (Sellent 2014: 11, 12). Instead, he chose to use two different registers of Catalan: a popular, atemporal variety, non identifiable with any concrete dialect, to be spoken by the local characters,2 and a normative standard by the English soldiers. Both forms flow with great naturalness and make possible the necessary ‘suspension of disbelief’ asked from the audience.