Rhythms of Writing: An Anthropology of Irish Literature

Rhythms of Writing: An Anthropology of Irish Literature 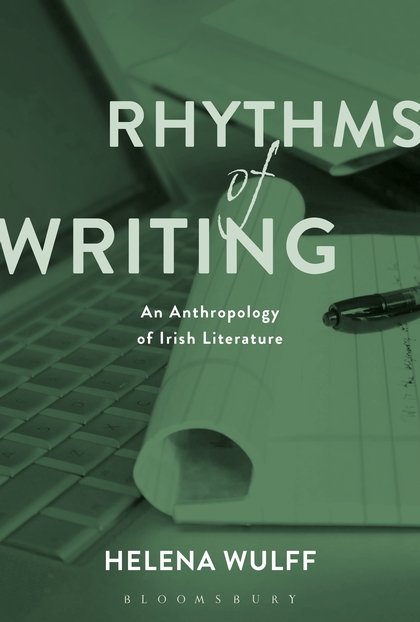 Irish writers and their bodies of work are the subject of scrutiny by journalists, literary critics, linguists, academicians, historians, biographers, film-makers and others. They have been analysed by period, genre, gender, thematically, stylistically, and even psychologically. These writers have, in turn, approached Irish society forensically for generations, often treating their subject matter – the Irish people – as anthropological subjects. Helena Wulff’s book is, to my knowledge, the first time that an anthropological lens has been focused on Irish writers themselves and what constitutes their communities both public and private. They are, it seems, a fascinating group to study in their natural habitats.

Wulff, Professor of Social Anthropology at Stockholm University, benefits from being in the best of all anthropological positions, as both an insider and an outsider. She has spent much time in the country, and has befriended, and ingratiated herself with, a variety of contemporary Irish authors. She is most interested in understanding the productive environment in which an Irish writer is bred and develops to maturity. In these pages she examines not only the home-based writer and his or her place in the society, but also the nurturing and flourishing of Irish literary reputations abroad. She is most interested in prose writers – few poets’ and dramatists’ careers are mentioned here – but the book’s thesis and supporting evidence seem sound enough to be applied to writers in those fields.

Although many writers and other creatives in Ireland may complain bitterly that there is insufficient support for their cohort in today’s Ireland (The biggest problem for writers now is probably one which affects the society at large – skyrocketing house prices and rents and an egregious housing shortage). Wulff illustrates effectively, however, that even from the primary school level, government initiatives such as the Writers in Schools scheme, and other private efforts such as Roddy Doyle’s laudatory Fighting Words programme provide encouragement and early aperçus for budding talent. Wulff continues through the life cycle, cataloguing creative writing degree programmes and other adult courses throughout the 32 counties, and other supports to the process, including writing bursaries and subventions to literary magazines. Literary and arts festivals, and that utterly unique Irish institution, The Summer School, combine to provide initial small scale publishing opportunities, and intimate venues where seasoned and new authors alike can read from their works. Another Irish institution – the book launch – is a constant on the Irish horizon (whereas in the UK it is the preserve of a privileged few writers). In Ireland, in season, there can be an embarrassment of choice for launch goers in Dublin and other cities, and in many smaller towns. And we haven’t even begun to consider, The Writers’ Centre, Poetry Ireland, Aosdána, PEN, and the various media outlets that can and do highlight literary talent, offer paid work, exposure and more subventions. Television and radio arts programme give time and space to new and established writers, and individual slots on mainstream entertainment programmes are available, such as that of Ryan Tubridy’s daily morning radio show. Another radio host, Sean O’Rourke, is one of many who feature a broadcast book club and there are podcasts galore. Lyric radio, the classical music station, hosts an arts programme that includes literature and drama and interviews artists and reviews their work. Arena, with Sean Rocks, and various multi-media arts programmes hosted by John Kelly have all given prominence to writers, along with Olivia O’Leary’s new Poetry Programme on Radio One. Broadcast and print media interviews are also legion, offering the new writer with a book appearing to have a biographical profile in print to coincide with the publication of a new volume.

It might be argued that these opportunities are to be found in other countries, and, indeed, they are – but perhaps not in such profusion. Then there are the prizes. Irish writers do love their prizes, and are eligible for more than writers in most countries because of their scope across the Anglophone world. If one adds in the book tours, the tireless work of agents (sometimes in several countries), the marketing efforts of publishers and the opportunities provided for writers to review each others’ works in newspapers and journals and even to write op-ed pieces in the media, one can begin to piece together what makes up the environment of this rarefied species. One might also begin to wonder – is it endangered? If so, what are its predators? Is it protected? Should it be?

Wulff’s interlocutors are numerous, and with only a couple of exceptions, they are named. Prominent among them are Éilís ní Dhuibhne, Colm Tóibín, Colm McCann, Anne Enright, Deirdre Madden, the aforementioned Roddy Doyle, John Banville, Celia de Fréine and Belinda McKeon. That list alone indicates Wulff’s democratic range with a balance of gender and reputation – some preeminent household names, others less known but with wide readership.

The author points out a feature in the developmental stages of Irish writers’ lives which might not be immediately apparent, to wit, the large number who either earned their living as journalists before embarking on creative writing, and the equally large number sustained by ongoing and multiple journalistic opportunities. Wulff also points to the existence of government subsidized literary journals which provide a nursery for talent, suited as they are to that pre-eminent of Irish prose forms, the short story; but also to excerpting longer works of fiction in progress. Her extensive interviews with critical players in what might be called the creative support industry are revealing, especially with Declan Meade, founder and editor of The Stinging Fly, a literary magazine and book publisher; and Anthony Farrell of Lilliput Press, a niche publisher avant le mot.

As valuable as this book is, it does have limitations. It may well be in the nature of such undertakings that they can be seen as nearly inevitably rendering themselves out-dated, but The Rhythms of Writing is a bit confusing in this regard. A recent enough talent, Donal Ryan, is discussed in some detail, but there seems no awareness of a veritable slew of new writers coming up alongside and immediately behind him. These are writers who had begun winning prizes years ago, such as Eimear McBride, Lisa McInerny, and Kevin Barry (who has also done much to foster the writing of others by guest editing literary journals, and embarking on Winter Papers, an impressive annual arts anthology). And, along with these and many others publishing in the last decade (Rob Doyle, Paul Lynch, Colin Barrett, Sara Baume, Claire-Louise Bennett and many more)) there have been seismic paradigmatic thematic shifts which make Wulff’s categories for Irish prose themes seem nearly quaint. It suggests perhaps that the book took a long time from its completion to publication, but then there are other recent reference points, like Brexit, appearing within her pages.

Although Wulff notes how important “product placement” (to be crude about it) of a short story or poem in The New Yorker or Granta can be for an Irish writer’s book sales, there is no mention of Paul Muldoon, who served as poetry editor for The New Yorker for a decade. Muldoon embodies the kind of expatriate writer she discusses in one of her five categories, to say nothing of having been well-placed to promote the work of other Irish writers. He is also one of the many Irish writers who hold currently, or have held in the recent past, lucrative and prominent sinecures at American universities. Wulff does write about Seamus Heaney and Colm Tóibín in this regard, but it is an arena that called for more in-depth focus if only because of the degree of prominence in American letters these writers since Ben Kiely and Frank O’Connor have enjoyed, and which resulted in heightened reputation both inside and outside Ireland, while providing crucial financial security. Paul Muldoon’s directing the Creative Writing programme in Princeton, and Poet Eavan Boland filling the same job at Stanford for much longer, have not only raised the profile of Irish writing but influenced new generations of young writers abroad.

A couple of remaining quibbles. Wulff is forced in places by the book’s weak construction to refer us rather too often back and forth either to things she’s already written or what is to follow. She chooses to highlight the maternal in literary autobiography, and while mothers can and do figure, the form is famous (or infamous) for its Oedipal tugs of war between writers and their fathers. Finally, the prominent London-based literary agent Paul Feldstein, who represents so many Irish writers, is referred to as Feinstein as least twice before his name is recorded correctly – in the same paragraph as one of the erroneous references.

Rhythms of Writing is an eye-opening and intelligent book that de-familiarizes a world one might have thought one knew. It may and should become the prototype for more such valuable work to follow.