by Tony Tracy. This text may be archived and redistributed both in electronic form and in hard copy, provided that the author and journal are properly cited and no fee is charged for access. 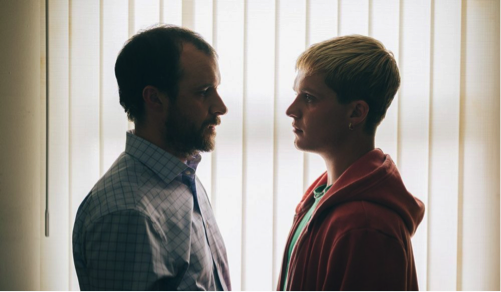 Interior-day-A middle-aged man in his place of work talks with a work colleague, then answers the phone. Exterior-day-A high angle shot of a modern port, thousands of containers neatly piled high; a car is seen leaving. INT-day – a charmless modern shopping centre. In the public toilets the man nervously engages in a sexual rendezvous with a young streetwise male before anxiously fleeing. EXT-day – the man is seen in the lush garden of his suburban family home where he assumes the familiar role of father and husband.

The opening scenes of Rialto offer a quick series of counterpoints: close ups and wide shots; open and claustrophobic spaces; emotional vulnerability and crude sexuality. They blend private and public, intimacy and anonymity, the tender and transactional. Holding these oppositions together is the figure of Colm (Tom Vaughan Lawlor) who is clearly under a great deal of pressure. Loved by his kind and sympathetic wife (Monica Dolan), Colm is in the midst of some kind of crises and while it evidently has a sexual dimension, a combination of factors combine to suggest something more complex and fundamental.

As the narrative unfolds, we learn that Colm is coming to terms with the recent death of his (abusive) father and supporting his mother to get rid of his belongings and arrange a memorial service. Then a recent takeover at his work threatens his job. Unable to confide in his wife and alienated from his son he seeks comfort in subsequent encounters with the male prostitute from the opening scene – Jay – that become something deeper.

Rialto resonates on several levels with Adam and Paul (2004) the film that first brought its writer Mark O’Halloran to widespread attention, along with director Lenny Abrahamson. Its feeling for contemporary inner-city masculinities for instance, themes of alcohol and alienation, and its sense of Dublin, including the evocative – and loaded – backdrop of the Poolbeg chimneys. Abrahamson and O’Halloran subsequently collaborated on Garage and the RTE mini-series Prosperity, before moving on to a range of other projects individually. (They have recently worked together again on the adaptation of Sally Rooney’s Conversations With Friends). While Abrahamson attained an increasingly international reputation through successes with Frank, Room and Normal People, O’Halloran has remained busy and creatively stretched in his dual profession as a writer and actor for film and stage.

While their separate, subsequent work has been varied one can retrospectively identify in Adam and Paul as an early but enduring touchstone for stories that foreground male characters who, for a variety of reasons, struggle to fit in with a variety of social situations and contexts. For Abrahamson, in work as diverse as What Richard Did, The Little Soldier and more recently Normal People, class has largely functioned as the means for exploring such themes while O’Halloran – as actor and writer (and it may be that the former informs the latter) – often focuses on the emotional vulnerability and insecurity of men. In Garage these perspectives combined to produce an unforgettable portrait of rural manhood in which Pat Shortt’s Josie became a tragic victim of the Celtic Tiger’s avarice (in the form of the Garage owner) but had its roots in a profound loneliness and clumsy longing for connection where he shares porno videos with a young man. Similarly Rialto focuses on another lonely man who uses sex and sexuality as a means of encounter and male companionship.

Rialto began as an in situ drama, commissioned by the acclaimed on theatre company THISISPOPBABY and premiered in an offsite B&B in Dublin’s inner city at the Dublin Theatre Festival in 2011. That performance starred just two actors (to the film) and was confined to the intimate surroundings of a bedroom where the audience stood observing the interplay between Philip Judge (as the older man) and Ciaran McCabe. It subsequently won Irish Times Best New Play and was optioned by producer Alan Maher for Marcy Productions.

To describe Rialto as the screen adaptation of Trade is only partially true. During its extensive development period O’Halloran was bound to “open it up” beyond its tiny original set but in doing do was compelled to extend beyond an intensely intimate encounter played out in real time. In doing so he could bring a greater sense of context to the encounter but also risk losing the intensity (as well as the sense of place) that made it so compelling. That scene is still at the heart of the film – literally so, occurring at midpoint in the narrative – but O’Halloran (and Burns Mackie) set out to imagine what happens before and after it; the events leading to this tawdry setting and the emotional fallout arising from it. But if space is opened out, the emotional intensity remains both focused and sustained through Vaughan Lawlor’s performance as Colm who remains the centre of every scene and whose pain and confusion wracks a restless body that constantly inhales cigarettes and cheap beer, submits to illicit and rough sex, is unable to touch his wife, wanders suicidal along the Dublin shoreline, and falls in the door of his home drunk.

If the death of his father and loss of his job are tremors that threaten and undermine the edifice of Colm’s middle-aged married manhood, they disturb something deeper and ultimately unresolved in the psycho-sexual substratum; his yearning for homosexual intimacy. As an added scene, when Colm visits Jay in his flat, shows that his yearning is more complicated than physical desire. O’Halloran further complicates this in positioning Jay as both father and surrogate son; a boy and man who works in order to take care of his baby daughter but with none of the self-doubt or self-loathing that are eating Colm. However, rather than clarifying matters, this pushes him further into self-disgust and he violently and grotesquely rejects his son in the most emotionally devastating of the film’s scenes.

Some years ago, Brian Finnegan spoke eloquently at the IFI’s annual Spotlight event of Irish cinema’s poor record of LGBTQ portrayals and counted just six gay protagonists in the history of Irish film. Is Rialto a film that remedies this history? And does it matter? On very obvious one level it does and that relates to the scope of representations available within Irish film. One could make the argument that Irish cinema has long been characterized by an over-representation of young men [by young men] and to an extent that continues here. But neither Colm nor Jay could be said to offer anything positive to Finnegan’s analysis and Colm’s sexuality ultimately remains entirely unresolved and re-suppressed – through a disciplining of the body.

Nonetheless, this is a queer film insofar as it questions ideas of (male) sexuality and ageing. That O’Halloran – a very visible member of the LGBTQ community – should choose to tell so unresolved a story, rather than (say) make a film with gay characters at the centre, is both revealing and mischievously disruptive. On the one hand one might say that it is indicative of post-marriage equality referendum Ireland (2015) where the theme of homosexual relationships is no longer taboo nor marginal in and of itself. But while that event took place after the production of the play, the film asserts an enduring homophobia and surrounding shame amongst an older generation, as well perhaps, as the limits of masculinity in a culture that remains stubbornly heteronormative. Whether or not Colm is a closeted homosexual is left unclear, but there is little doubt that this conventionally married, middle-aged and unemployed individual is in deep trouble with little sense of how to forge a path forward as a father, husband or man.

While Rialto shares similarities and can be fruitfully discussed in relation to the considerable number of contemporary Irish films dealing with Irish masculinities in crises – Glassland; What Richard Did; Michael Inside; Mammal, to name but a few – it rises above the majority by bringing nuance and a measure of maturity to that familiar theme. A spare but coherent screenplay by O’Halloran (though some might object to its ending), a harrowing performance by Vaughan Lawlor that is both raw and modulated, and lucid direction by Pete Mackie Burns that holds exterior realism and interior turmoil in tension, ground a story that is by turns extreme and every-day. Secondary roles are also crucial to its success, notably Monica Dolan’s deeply sympathetic portrayal of Claire and the more callous, but equally credible Tom Glynn-Carney as Jay, who emerges as the most grounded and in control of all the film’s characters.