by Mariana Bolfarine. This text may be archived and redistributed both in electronic form and in hard copy, provided that the author and journal are properly cited and no fee is charged for access. 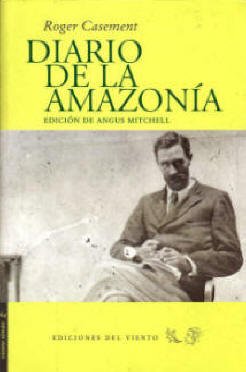 The Amazon Journal of Roger Casement, first published in 1997 by Lilliput Press, is the result of years of archival and historical research carried out by its editor, Angus Mitchell. Its translation into Spanish, by Sonia Fernández Ordás, Roger Casement. Diario de la Amazonía (2011) is a first step towards bringing to light the controversial figure of “Casement stripped of his sexuality” (Mitchell 2009: 196), which is, not surprisingly, his least known facet up to this day.

Diario de la Amazonía begins with a letter from Peruvian writer Mario Vargas Llosa to Angus Mitchell in which he describes Casement’s Amazon Journal as a sociological document that exposes the miserable condition of the Indians in contrast with the wealth in Manaus and Belem do Para due to the rubber economy. To Vargas Llosa, Casement’s journey to the Putumayo – a frontier region claimed by Brazil, Colombia and Peru – incited great changes in his character and individual experience.

Mitchell’s introduction provides a biographical overview drawing a parallel between Casement in the Congo, disclosing the horrors practiced by the expeditions of Henry Stanley, and in the Amazon, revealing the excesses committed during the four centuries of Portuguese and Spanish rule. Mitchell assesses the impact of the white man in the Putumayo and blames the second industrial revolution that was taking place among the developed economies in the late 19th and early 20th century: the invention of the pneumatic tire by John Dunlop and the process of electrification.

Following Hardenburg’s reports claiming atrocities against the native populations in the Putumayo, in 1910 Casement was asked by Sir Edward Grey to verify the living and working conditions of 200 Barbadians, British subjects transported to Peru to work as overseers on the rubber stations of the Peruvian Amazon Company. Thus, after the introduction the book is divided into 10 chapters named after the places Casement visited during his journey.

In order to describe “the devil’s paradise”,1  Casement employs a descriptive style based on Manichaeistic dichotomies such as good and evil: the Indians and the Barbadians are the victims, while the villains are the members of the Peruvian Amazon Company, ultimately Armando Normand, chief of the station called Matanzas, “[…] con una cara que en mi opinión era sin lugar a dudas la más repulsiva que he visto en mi vida. Era absolutamente diabólica, por la crueldad y malicia que transmitía. Me sentí igual que si me hubieran presentado a una serpiente” (166-7), who was responsible for the worst crimes against the natives.

There are three main issues raised in Diario de la Amazonía: the first is Casement’s empathy with the Indians. In the chapter “Regreso a Entre Rios” Casement sleeps amongst Indians and attends their wounds. He wishes to protect and arm them, “nada me gustaría más que poder armarlos, entrenarlos y adiestrarlos para que se defiendan ante estos rufianes” (217), mirroring his further actions in forming the Irish Volunteers, in 1914. Yet, a somewhat polemical Casement is revealed as he acquires “his” Indians, the little Omarino for a shirt and a pair of trousers, and the young married man Arédomi, over a game of bridge.Although he explains his reasons for doing so, “Mi esperanza es que al llevar a Europa algunos de estos indígenas allí desconocidos logre que haya gente poderosa que se interese por ellos y al mismo tiempo por el destino de toda la raza que queda aquí, en el tajo” (247), his means of raising awareness in Europe were quite questionable even then.

The third is his disillusionment with the civilizing mission preached by European Empires whose aim to shed light into the dark continents was but an excuse to exploit the native peoples and lands. The book starts as a travel journal of a diligent employee: “Esto nos llevó a un debate algo extenso sobre los métodos de la colonización británica y las garantías que nuestro gobierno había establecido y seguía estableciendo para proteger a los nativos en las colonias”(29), and it ends as the investigation of an anti-imperialist dissident after the Commission concluded that both the Hardenburg papers and the crimes committed against the Indians were true, “¡Qué régimen tan adecuado para una Compañía Británica civilizada!” (301).

The Epilogue informs of the outcome of Casement’s journey as he returned to England in 1911. The Blue Book (official Putumayo report) was published in 1912, inciting profound changes in the rubber politics and economy. In 1913, Casement retired to engage in the Irish cause, travelling to Germany to gather this country’s support. In April 1916, he returned to Ireland where he was arrested and hanged for high treason in Pentonville prison on the 3rd of August 1916. His fate was decided after British authorities found a set of intimate diaries describing homosexual practices, known as the Black Diaries.

The footnotes in the 1997 version of the Amazon Journal contrast the two different personae Casement assumes in order to prove that the Black Diaries were forged. In this sense, the Spanish version differs from the English, for the Black Diaries are only briefly mentioned in the Epilogue to explain the importance they once had. Up to 1997, the narrative of the Amazon Journal had been suppressed by previous biographers who legitimized the sexual narrative. Thus, its publication could be considered a counter response in favor of Casement’s defense. In Diario de la Amazonía, although appearing more scarcely, the footnotes are a supplement to Casement’s entries, assisting the reader to set the historical, geographical and sociological context. For instance, Mitchell describes the tributaries of the Amazon basin (26-7) and elucidates the meaning of words and expressions that appear originally in Portuguese or Spanish as cachaça (296), or muchachos de confianza (53).

Better than the 1997 version are the two picture sections: one of the Putumayo with notes by Casement, and another with captions by Mitchell, as well as the foldable map entitled “Croquis de la zona territorial del Río Putumayo ocupada por las empresas J.C. Arana y Hermanos”, giving an idea of the damage inflicted by the Company.

Diario de la Amazonía reveals a shift in late 19th and early 20th century travel writing about colonial atrocities, which, according to Robert Burroughs, is based on its “open admission of the witness’ angry response to violence” (120). He sustains that Casement’s travel account is unique as it not only draws together “centre” and “periphery”, but also expresses personal outrage in his discovering the “English” complicity with the Putumayo atrocities. Its style differs from Casement’s factual and distanced Congo report, since there he played the role of a representative of the British Empire, whereas Diario de la Amazonía is intimate, revealing his private feelings and perceptions about what he was actively witnessing.

To conclude, Casement had the traveller’s eye, but he was also an agent of transformation among the Indians, and Diario de la Amazonía is a powerful weapon for denunciation as it claims for changes to be implemented in the depths of the Amazon Forest and exposing to the world what would otherwise remain invisible. The content of Casement’s entries is up to date and relevant for a broad understanding of the exploitation by Brazilian and Peruvian societies of the Amazon forests and its native populations today, tackling themes that we now recognize as the province of human rights and preservation of natural resources. This excellent Spanish translation will certainly help to spread the narrative of Roger Casement, so that he can be remembered as a revolutionary and, chiefly, as a humanitarian Irishman.

Bourroughs, Robert. 2010. Travel Writing and Atrocities: Eyewitness Accounts of Slavery in the Congo, Angola and the Putumayo.Oxton and New York: Routledge.