Sacred Weather: Atmospheric Essentialism in the Work of John McGahern

Sacred Weather: Atmospheric Essentialism in the Work of John McGahern

by Yen-Chi Wu. This text may be archived and redistributed both in electronic form and in hard copy, provided that the author and journal are properly cited and no fee is charged for access. 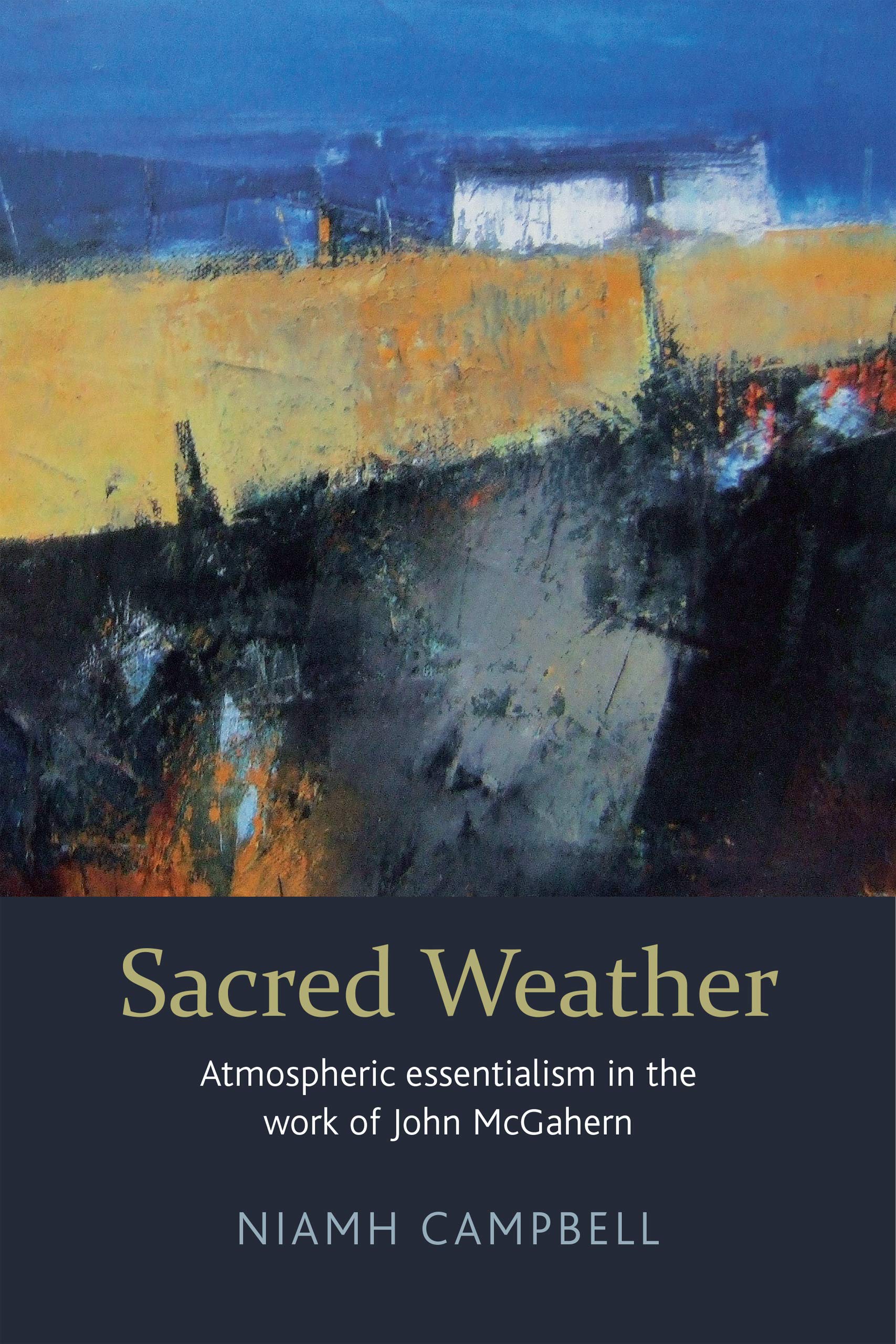 John McGahern’s “The Image” is often regarded as his artistic manifesto. The elusive way in which he describes the image in the essay and the extent to which this tenet may be applied to his writing have inspired much scholarly discussion that attests to the richness and complexity of the Leitrim writer’s literary style. McGahern writes:

Art is an attempt to create a world in which we can live: if not for long or forever, still a world of the imagination over which we can reign, and by reign I mean to reflect purely on our situation through this created world of ours, this Medusa’s mirror, allowing us to see and to celebrate even the totally intolerable. (7)

Certain images recur and echo in McGahern’s oeuvre: the religious and devoted mother, the domineering veteran father; a broken gold watch, and the rural landscape of in-land Ireland. These repetitive figures and images, however, are given different significance in their contexts. They contribute to a recognizable McGahern world that seems to suggest the writer’s debt to realism or naturalism; however, the visual quality and the re-purposed use of the images also imply a modernist twist. McGahern was often dubbed as a documentary realist by early critics, while recent commentators have paid increasing attention to the understated modernist sensibilities in his writing. To a certain extent, both realism and modernism prove to be restricted registers to account for McGahern’s particular style – a McGahernesque quality – that defies the rigid characterization of any given literary sensibility.

Niamh Campbell’s Sacred Weather: Atmospheric Essentialism in the Work of John McGahern (2019) does a brilliant job in proposing a new way of understanding the elusive McGahernesque quality – a term coined by the author herself. Placing McGahern’s work in a dynamic framework that includes reader response, Irish socio-historical context, and the often-debated idea of Irishness, the author sheds new light on the way in which we may better understand the relationship between “The Image” and the quintessential McGahern style. She does this by way of proposing a new methodology of “atmospheric essentialism”, which builds on affect theory, ecocriticism, psychoanalysis, and postcolonial cultural criticism. Theoretical reading of McGahern’s work is not new; Eóin Flannery’s ecocritical approach and Richard Robinson’s examination of McGahern from a (new) modernist paradigm are admirable examples that use a theoretically-informed framework to tease out the complexity of the Leitrim writer’s deceptively simple style. But Campbell’s incorporation of affect theory is not only new, it is a smart and apposite choice. It allows her to read the familiar McGahern images and landscape with a focus on their “profoundly ambient emotional afterglows” (1), as Campbell beautifully puts it. Her excellent employment of affect theory is Sacred Weather’s singular contribution to McGahern studies as well as to Irish Studies. By directing our attention to affect, she underpins a missing link to understanding the McGahernesque style that is more than purely aesthetic: it is deeply reflective of the affective attachments associated with Irish culture and history.

The four main chapters pursue some of the familiar themes in McGahern’s writing but examine them via a fresh theoretical lens. The introduction and the first chapter put forth the overarching ideas of “atmospheric essentialism” and “place-world” in the monograph. Campbell confidently and freely moves around different critical paradigms to make her own mark. Drawing from a diverse array of theorists and critics, such as Timothy Morton, David Lloyd, Jacques Lacan, Colin Graham, and many others, she proposes to understand atmospheric essentialism “as a constellation of affective phenomena bodying forth moods, responses and associations on different levels, and acting in both a personal and political way” (x). Understood in this framework, the elusive “Irishness” can be examined as a “consumable quasi-substance” (9). To demonstrate her point, Campbell uses “peatsmoke” as a representative of Irishness: it is quasi-substantive, and it is able to elicit varied emotional purchase as a signifier. She declares: “Every comical, cynical, poignant and prosaic implication of the poetics of peatsmoke is relevant and deliberate” (9). Reading McGahern’s work in the guiding principle of atmospheric essentialism, Campbell impressively draws out an interesting dynamism between the Leitrim writer’s minute evocation of local particularities and the affective associations with Irishness.

The framework of atmospheric essentialism also allows us to reassess McGahern’s relationships with the Irish literary canon, as well as social and cultural history. For instance, Campbell reads McGahern alongside Joyce by looking at the mothers – May Joyce and Susan McGahern – “as figures for a strand of conflicted psychic and artistic symbolism” in their works, instead of mere representation of historical figures (46). She challenges the socio-historical approach to reading The Dark by using psychoanalysis to problematise the existing “narratives of comprehension and atonement which surround the biopolitical history of the Free State” (91). In the opening scene of the novel, old Mahoney threatens to whip his son for using the word FUCK. The reader’s heart tightens as we witness young Mahoney lose bladder control in fearful anticipation of the flogging. But as Campbell reminds us, we never really hear young Mahoney utter the dirty word, and the whip never strikes the boy’s buttock. In this sense, The Dark is not merely a documentary of the dark oppressive past in the Irish history, it is also a prime example of how affective associations with that past endow the novel with a new affective significance. These are both fascinating readings that engage McGahern’s work with broader literary and social-historical paradigms. What is more impressive, perhaps, is Campbell’s ability to tease out the affective attachments of McGahern’s repetitive use of certain images and figures. In the fourth chapter, “Fascinating Francis: A Preposterous History”, she complicates the reading of Francis McGahern as a configuration from the writer-son’s memory that recurs in his fictions. Highlighting the historical figure of Patrick Pearse and the varied affective responses to him, Campbell draws out a big paradigm that alludes to Pearse’s fictional reincarnations in the works by W.B. Yeats, Sean O’Casey, Jamie O’Neill, and photographic artist Billy Quinn, in addition to how Pearse’s portrait is introduced to Irish students through state-imposed curriculum. According to her, much like Patrick Pearse, McGahern’s parents are better understood “as enigmatic signifiers in themselves” (139). Their signified meanings and affective associations are varied, selective, and highly problematic. In this light, although McGahern tends to recycle certain images and figures in his work, they are employed as unstable signifiers in their respective contexts. This creative use of the elusiveness of signifiers, Campbell points out, may provide us with a new way to understanding McGahern’s contribution to Irish modernism. Sacred Weather’s wide scope not only complements extant McGahern studies but also establishes a unique methodology for Irish Studies in general.

The theoretical richness of the monograph moves McGahern studies to a new critical terrain. For a monograph with such a great ambition, however, the preface to Sacred Weather is curiously defensive and almost apologetic in tone. One may surmise from such a tone that the author was trying to justify her approach in response to editors’ and reviewers’ criticism. This presumed editorial concern, however, is perhaps well warranted. Despite its brilliance, this monograph is very difficult to market to general readers. It is extremely erudite and theoretically dense. Campbell borrows from many heavyweight theorists to put forth the idea of atmospheric essentialism (for which she pre-emptively half-apologized in the preface). For readers who are unfamiliar with these theories, this heavy borrowing of academic vocabulary could be quite daunting. Campbell writes beautifully, a talent that is evidenced by the quality of her creative writing (her novel This Happy received rave reviews). But where theoretical lexicons are densely used, the clarity of sentence sometimes suffers and the flow of narrative stalled.

This quibble, however, is not a criticism of the book’s quality. I am conscious that a book’s difficulty is relative to the reader’s bearing. It is therefore unfair for a reviewer to dismiss a book as “too theoretical” when it is precisely what the book sets out to do. It should, however, serve as a warning. Readers need to be prepared to be challenged by Sacred Weather, which puts forth ideas that are “original, risky, and intended to start conversation”, as the book’s blurb suggests. Above all things, the book certainly achieved what it promised.