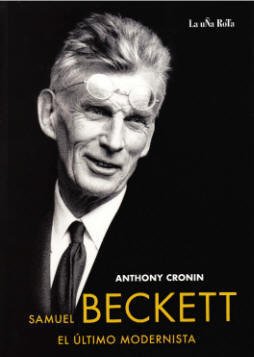 Almost 25 years after the author’s death, quite a number of books concerning Samuel Beckett’s life can be found. The variety on offer spans from engaging accounts for the uninitiated Beckett first timers to more scholarly investigations. A recent volume added to the list, for instance, is Samuel Beckett (2010), by Andrew Gibson, an instructive account of Beckett’s life and works in just 200 pages by a scholar fully up-to-date in recent developments in Beckett criticism.

The pioneering study on the life of the Irish Nobel Prize winner was Deirdre Bair’sSamuel Beckett: A Biography (1978), the only one written when Beckett was alive. Although it is a meritorious book, the biographer did not obtain Beckett’s acquiescence and there are many inaccuracies and mistakes. Then, in 1996, two major biographies were published, James Knowlson’s Damned to Fame. The Life of Samuel Beckett and Anthony Cronin’s Samuel Beckett. The Last Modernist. Before going any further with the discussion of these two books, it is worth mentioning the existence of another accomplished volume on Beckett’s life: Lois Gordon’s The World of Samuel Beckett 1906-1946 (1998), which is particularly good at explaining the historical context that surrounds Beckett’s experiences in the first half of his life.

James Knowlson’s Damned to Fame is, so far, the Bible of Beckett studies. Knowlson was a personal friend of Beckett and he counted on his full support, granting him access to all his documents and providing letters which certified that he was his sole authorised biographer. Besides, Knowlson had the opportunity to spend many hours in conversation with him (later recorded in Beckett Remembering, Remembering Beckett —  2006) in the previous months to his death, and therefore his account of Beckett’s life is informative and precise in a thousand minor details. In short, it is the kind of book one picks up to consult a particular point about the man or the circumstances of his literary production. In his condition as a Beckett scholar, Knowlson delves into the intricacies of every novel and play with a truly academic scope of interest. While writing the biography, he said in an interview, he “had to bear in mind with every sentence I wrote that that sentence is meant for someone who doesn’t know anything about Beckett but at the same time it is going to be read by Ruby Cohn [the doyenne of Beckett studies]” (in Fernández 2006: 60).

None of the books previously mentioned have been translated into Spanish, a fact owing less to a lack of interest in the lives of great personalities than on the cost of literary rights for translation. Therefore it is a matter of great pleasure to announce that a fine and comprehensive chronicle of Beckett’s passing through the world is now available for the general public in Spanish. Samuel Beckett. El último modernista was first a project by the publishing house La otra orilla. They commissioned the task to the person who, arguably, was the best translator from English of his generation, Miguel Martínez-Lage, a Beckett scholar by his own merits. La otra orilla closed down and could not  publish the book but a courageous young editor, Carlos Rod, offered to lead the project to safe harbour with his own independent print La uña rota. Carlos Rod himself took on the demanding task of compiling the 753 endnotes of the book and he made sure that the first extended text on Samuel Beckett’s life in Spanish had the makings of a carefully edited volume. The result is a superb edition, written in an excellent Spanish and virtually flawless in terms of formal aspects.

As regards the contents of Cronin’s biography, it must be stated that he is not a Beckett scholar but a creative writer and literary critic. This means that El último modernista is probably the best book one could choose in order to get a sound panoramic view of the  author of Waiting for Godot. Although Cronin does not examine every work with scrupulous detail, his literary judgment is firmly grounded and Beckett’s works are adequately contextualized and explained. He may not trace the origin of Beckett’s ideas as regards his plays and novels, but this does not entail that he is superficial or trivial about Beckett’s literary production. Cronin’s book is, more than anything else, the compelling narrative of a journey through Beckett’s life, becoming therefore the perfect biography for those who want to have a first glimpse into the fascinating life of perhaps the most enigmatic writer of the 20th century.

Cronin’s biography has particular strengths that make it different from the other books of its kind: it offers ample information on Beckett’s long, complex and for the most part solitary years in Dublin in the 1930s. Becket before Beckett was an arrogant young man, haunted by a domineering mother and clueless about the direction he would take in his life, and this feeling of hopelessness is conveniently rendered in the book.  Cronin fluidly describes the literary circles of the Irish capital in those bleak years, and offers perceptive insights into Beckett’s personal contacts with other intellectuals (as with his friendship with painter Jack B. Yeats or his warmth towards poet Tom MacGreevy). He also speaks with real feeling about what it meant to be a budding Irish writer in London, as young Beckett was at times during his early adulthood.  The density of the narration may get diluted as the book progresses towards the 1960s and 1970s, but in everything related to Beckett’s Irish connection, and also in describing the impact of French culture on the young man, Cronin’s book strikes the right notes.

Cronin himself met Beckett briefly in the 1950s and 1960s, but he manages to keep the necessary distance with his biographee. As Morris Dickstein stated in a review of the book in The New York Times, rather than presenting a finished, rounded-off portrait of Beckett, Cronin “is more attentive to the byways, hesitations and failures as they were experienced at the moment” (Dickstein, 1997). This point was confirmed by Steven Connor when he wrote that Cronin’s life of Beckett was “characterised by rupture and unevenness” (Connor, 1998). In this sense Cronin’s could be considered closer to an alternative biography, more an author’s well informed interpretation of the life of an influential figure in world literature than a neutral, exact, fixed photograph of Beckett.

Samuel Beckett. El último modernista is a book that is read with pleasure because of its fluent style and the personal tone given by its author. It is definitely a book worth buying and having in one’s library as a dignified homage to the man.

Fernández, José Francisco. 2006. “Beckett and His Biographer: An Interview with James Knowlson”. The European English Messenger, 15.2. 58-63.