by Bernardo Santano-Moreno. This text may be archived and redistributed both in electronic form and in hard copy, provided that the author and journal are properly cited and no fee is charged for access. 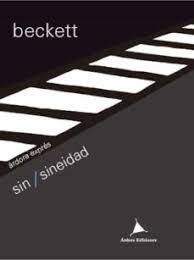 Edited and translated by José Francisco-Fernández and Loreto Casado

“To exhaust the inessential” defines much of Samuel Beckett’s attitude to literary creation. A gifted linguist who graduated first in his year in French and Italian, his way of writing shows his ability and playfulness to manipulate language, which he understands a mantic instrument. S. Becket was awarded the 1969 Nobel Prize in Literature “. . . for a body of work that in new forms of fiction and the theatre, has transmuted the destitution of modern man into his exaltation” . As Francisco Pérez Navarro has pointed out: “Beckett was able to portray like nobody else the deep, dark pessimism of humanity in its disintegration process” . Beckett, a singular author among the most unique writers, produced a copious literary corpus in both French and English, and successfully cultivated very different genres: novel, poetry, theatre, essay, radio, television, etc. As the publication of Sin/Sineidad (Sans/Lessness) by J. F. Fernández and L. Casado demonstrates, the interest in his works among academics and the general reading public remains very much alive in the twenty-first century.

Sans/Lessness has the reputation of being one of the most enigmatic and challenging of Beckett’s creations. Originally written in French in 1969, and later translated into English in 1970 by Beckett himself, this work is generally considered a prose fragment, although for some scholars, it is on the verge of poetry. Several critics have also established certain connections between the experimental musician John Cage (1912-1992), who achieved notable recognition in the 1960s, and Beckett himself. While it is true that there is no evidence that they ever met personally, other artists, such as the composer Philip Glass, have drawn parallels between Beckett and Cage and have considered them as sources of inspiration for his own work. In this sense, recent critics have pointed out that there are strong similarities between Beckett’s interests in experimental art, and particularly in Texts for Nothing (1950-52), Sans/Lessness, and John Cage’s treatment of silence .

The translation into Spanish (directly from the French text), by Félix de Azúa, has been available since 1972 (Sin seguido de El despoblador. Barcelona, Tusquets), when it appeared together with El despoblador (Le Dépeupleur, published in 1966 was translated into English by Beckett as The Lost Ones in 1972). This edition coincided in time and editorial formula with the Italian one, published in Turin (1972) under the title of Senza e Lo Spopolatore, translated by Renato Oliva. The Spanish edition was later reprinted in 1984 and 1997 . In his succinct introduction to the Spanish version Félix de Azúa describes the complex task of the process of translation by explaining that few of Beckett’s texts are so difficult, and so interesting at the same time, as Sans. According to Azúa, most difficulties arise from what he refers to as the “singular” rhythm of the French original (7).

The new edition and translation of Sans/Lessness not only supersedes the previous one by Azúa, but it is also novel in several respects. It presents a brief but elucidating introduction, a note on the translation with some relevant remarks on the general attitude towards the source texts, and a bibliography of works cited. The edition itself is a trilingual text in four different versions, the languages being French, English and Spanish, but each source text (we may regard both the French and English texts as originals) is accompanied by its own direct rendition into Spanish. The two Spanish texts are therefore somewhat different. The author of the translation from the French version into Spanish is L. Casado Candelas (University of the Basque Country) an expert in French studies and Beckett. The translation from the English text is by J. F. Fernández-Sánchez (University of Almería) one of the most credited scholars in the field of Beckett’s studies in Spain.

This edition is also accompanied by a well-grounded introduction by J. F. Fernández in which he points out that in the essence of this work lays a paradox. On the one hand, J. F. Fernández says, the text is “very ethereal, metaphysical and clean” (9), but on the other, at the same time, it is a “decisively physical text with … conspicuous, precise and exact material features of composition (10). As Beckett himself explained, Sans/Lessness follows in the wake of two previous works, Imagination Dead Imagine (1965), and Bing, a 908-word-long text in French which Beckett himself later translated into English under the title of Ping. Beckett summarized its theme as “the collapse of such refuge as that last attempted in Ping and with the ensuing situation of the refugee” (Garforth 2006: 82). The words in both Ping and Sans/Lessness are plain, and the punctuation is sober, which makes Sans/Lessness, according to Ruby Cohn, “…perhaps Beckett’s most difficult piece to read as narrative” (2001: 306, italics mine), as J. F. Fernández also agrees (10). In the last phase of Samuel Beckett’s literary career, according to Fernández, “… after a life reducing everything to the essential, without any further consideration Beckett gets rid of what he considers the falsehood that surrounds literature and focuses on reflecting inner worlds and mental states with little connection to a recognizable reality” (10-11); however, “the text oozes lyricism and preoccupation for its visual impact” (11).

The introduction clarifies the method used by Beckett in the process of composition of Sans/Lessness. As is already well-known by scholars, Beckett wrote 60 sentences (the number of seconds in a minute or minutes in an hour – according to Ruby Cohn (2001: 305), which are repeated giving a total of 120 sentences. They are distributed in 24 paragraphs (the number of hours in a day and limiting – as Ruby Cohn says – the number of sentences to a paragraph being limited to seven, the number of days in a week (305)). J. F. Fernández rightly emphasises Beckett’s resource to mathematics “… in his relentless search for new forms of expression breaking away from linear narrative”, since he always thought that this “diverted attention from what the words really hide” (13) in an endless attempt to make sense. J. F. Fernández brilliantly summarizes the challenge presented by Beckett in this piece as: “To create a narrative with no logical sequence, only governed by chance, but which at the same time was a beautiful text, full of meaning and highly evocative” (13).

Another relevant aspect that stems from the present trilingual edition is that both J. F. Fernández and L. Casado have provided a remarkable tool for scholars in order to explore another area of research which might have been somewhat neglected in Beckettian studies: the area of self-translation . As an example of the complex process of composition-translation-recreation, the first passage might be used to illustrate how Beckett worked and reworked his own text in the process of self-translation. Drawing on all this, the Spanish versions also show how the two translators, whose target texts stem from two different source texts, however created by the same (Beckett’s) mind, had to deal with the different nuances of the words chosen by the author. The very first sentence in the French original reads: Ruines vrai refuge enfin vers lequel d’aussi loin par tant de faux. This appears in English with some very visible modifications: Ruins true refuge long last towards which so many false time out of mind. It becomes quite obvious that the English text, which is the second original, shows the addition so many and time out of mind, an addition that clearly represents Beckett’s own correction of the original idea. Obviously, the Spanish versions of these two source sentences show differences which necessarily imply divergences in meaning. In this respect, a comparison of L. Casado’s interpretation of the French sentence and J. F. Fernández’s of the English one reveals the complexity of the rendering process for both translators. Casado’s version reads: “Ruinas refugio seguro por fin hacia el que de tan lejos por tanto falso”. On the other hand, Fernández’s version of the same sentence from the English source text is: “Ruinas verdadero refugio por fin hacia el que un gran número tiempo impostor ni un recuerdo”. It is evident that the French adjective “vrai” is equivalent to the English adjective “true”; however, both texts in Spanish offer somewhat different alternatives thus mirroring Beckett’s linguistic playfulness . For Casado “vrai” is “seguro”, and for Fernández “true” is “verdadero”. The fact that the French original itself does not include semantic references to “so many” (“un gran número”), “time” (“tiempo”) or “out of mind” (“ni un recuerdo”) highlights Beckett’s concern with variations in the possible interpretative range of the semantic contents of the words.
These modifications are of the utmost importance when dealing with Beckett and with such a complex text as Sans/Lessness even if this refers only to the first sentence of the first passage. The rest of the text deserves a close scrutiny which, no doubt, will offer significant conclusions. These variations make us think of Beckett’s conception of writing in French and English. As he once said to the critic Lawrence E. Harvey, “French represented a form of weakness by comparison with his [Beckett’s] mother tongue. Besides, English because of its very richness holds out the temptation to rhetoric and virtuosity, which are merely words mirroring themselves complacently, narcissus-like” (1970: 196).

There is much to celebrate in this unprecedented Spanish edition of Beckett’s Sans/Lessness, not least the editors’ effort at bringing together the two original texts and making accessible their corresponding Spanish versions to scholars and general readers alike. Ultimately, Sin/Sineidad appropriately reflects on translation as an act of creative transference (a reflection which is extremely relevant in order to approach the study of Beckett’s self-translations) thus opening new ground for research and debate in the field.