by Liz Carville. This text may be archived and redistributed both in electronic form and in hard copy, provided that the author and journal are properly cited and no fee is charged for access. 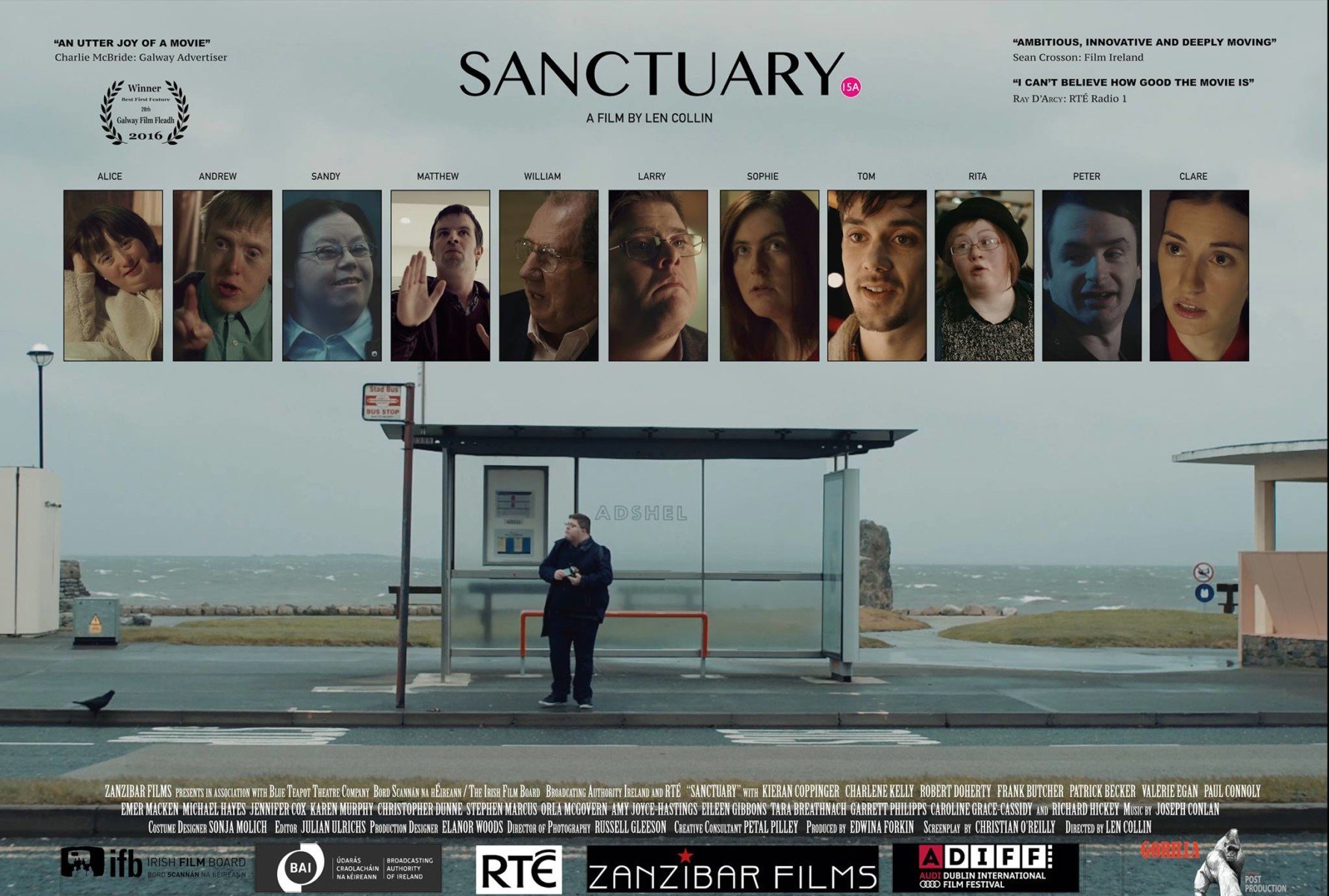 Sanctuary is a film that uses the generic conventions of a romantic comedy to explore the rarely-represented theme of sexual relations between young people with intellectual disabilities. The film originated from a theatrical commission by Petal Pilley, artistic director of Blue Teapot Theatre Co., a community arts project based in Galway that uses the expressive potential of performance as a “creative way to get people with intellectual disability involved in the community and kind of pull them out of themselves” (Collin 2016: 5). The resultant stage play by Christian O’Reilly impressed Len Collin, a Galway-based screen writer and director with a well-established career within the British and Irish film industry, who proposed rewriting the drama as a feature film. Collin began working with the cast from the Blue Teapot Theatre Co. in 2011, (most of whom had starred in the original play version and have intellectual disabilities), gradually developing a rapport with the actors and guiding them in film technique. With a modest budget of €800,000, funding for the new film was secured from the Irish Film Board’s Catalyst Project, as well as from the national state broadcaster RTE and the BAI (the Broadcast Authority of Ireland). Despite the adverse weather conditions caused by an Atlantic storm, the filming of Sanctuary was completed over an intensive five-week period involving eleven-hour days with the cast and their carers. Sanctuary premiered on July 10 2016 as the closing feature for the Galway Film Fleadh where it won the award for Best First Irish Film. This was followed by screenings at various locations across Ireland as part of the Audi Dublin Film Festival with national release scheduled for April 2017 as well as future festival screenings in America and Australia.

Collin’s decision to select Galway as a setting, a city that is local to the actors, is both novel and insightful and gives their performance a natural, relaxed quality that heightens the realism of the drama. Sanctuary is set during the busy Christmas season when nine adults with intellectual disabilities are on an excursion to the cinema with their well-meaning, if less than judicious, care-worker Tom (Robert Doherty). Tom has allowed himself to be bribed by one of the group, Larry (Kieran Coppinger), to arrange that he and Sophie (Charlene Kelly), (another service user of the day centre Tom works for), escape to a nearby hotel while their friends attend the film screening. How long Larry and Sophie have been romantically involved is never specified but the furtive glances between the couple, the clandestine way that Larry and Tom meet on the morning of the trip to arrange the payment for the hotel, and Larry’s insistence that the tryst take place on this day lest the pair miss their opportunity, communicates the fact that an intimate relationship between two people with (ID) intellectual disabilities is considered taboo by others within their community. Their plan begins to fall apart, however, when Tom learns from Larry that he intends to have sex with Sophie, which, as both have ID and are not legally married, is a criminal offence under Irish law. Despite his reservations, Tom gives Larry a condom from his wallet and leaves the lovers alone, but rather than return to the cinema to supervise the remaining group members, he delays at the hotel chatting up the receptionist, Clare (Karen Murphy). It is not long before the other members of the group at the cinema notice their friends’ extended absence and set out across Galway city in search of them. Tom then embarks on a frantic search for the wandering group before the arrival of the mini-bus which will return them to the day centre.

Sanctuary is not so much a film about disability as it is about how disabling society can be and the restrictions it can impose on the most natural of instincts; to participate in an emotionally and physically satisfying relationship with another human being. One of the most poignant and thought-provoking moments in the film occurs when Larry, on initially being refused his request to purchase a condom, asks Tom if things would be different if he and Sophie were “normal”. Tom responds with repugnance to Larry’s use of the word but the point is made: if Larry and Sophie love each other and are above the legal age of consent, why does the law prohibit something that is considered so normal for the majority of the population, a majority who are just as fallible, emotional and susceptible to heartache? That interpersonal relationships are both complex and fragile by their nature is underscored later in the film when Tom, whilst searching the streets of Galway for the missing members of the group he is supposed to be chaperoning, attempts to kiss Clare. This ends disastrously when she rejects him without hesitation. Tom’s furious swearing at himself for misjudging Clare’s response parallels a similar incident between Larry and Sophie when she finally learns of his intentions to have sex. To focus on the fact that neither couple’s relationship is intact by the film’s conclusion is to miss the general point: both are as capable of falling in love and failing in the execution.

Sanctuary is brave in the unflinching way it confronts, not only the social and legal barriers faced by people with ID in Ireland who want to experience the tenderness of a loving relationship, but also the way that, through the challenges of Larry and Sophie, the film highlights the practical difficulties that such a relationship involves; their lack of access to money beyond the spare change that Larry has accumulated in his piggy bank, for example, or the fact that Larry and Sophie eventually have unprotected sex because neither knows how to properly use a condom. If it falls down in terms of redressing imbalances of representation, it is in its tendency to privilege the perspective of male over female characters concerning sexual desire. It has for some time been recognized that media, such as film can be considered “amongst the most powerful tools of women’s ideological oppression” (O’Connor 1984: 79) and Irish cinema has been no exception in this regard. However, in a film such as Sanctuary that does contain such strong-willed and independent minded female characters as Sophie, Clare and Sandy (Emer Macken), the androcentric slant is all the more striking. This may be the inevitable result of a male writer and director, and to its credit the film does present a range of male identities. The most obvious contrast in this respect is in the way that the urgency of Larry’s desire to have sex with Sophie is juxtaposed with Peter’s (Michael Hayes) embarrassment that Sandy openly flirts with him in front of their friends, and thus offers two very different representations of non-hegemonic masculinity: one determined, the other hesitant and both sexually inexperienced. The problem is that this comes at the cost of both women’s prerogative. If it has been typical to consider people with mental or physical disabilities as “asexual” (Begum 1992), as Costan and Kimmel have noted, disabled men “are no strangers to accepting and relying upon social norms of masculinity. Despite their stigmatized status, they do have access to sites of privilege” (2012:103). Sandy’s playful sexuality, (“he’s lovely when he’s angry”) is tamed to suit Peter’s preference for a romance that is explicitly on his own terms, while Sophie’s immediate insistence that Larry phone Tom to take her home once she discovers the hidden condom, falls on deaf ears and is forgotten once Larry begins to dance in an attempt to defuse the tension between them.

A second issue in need of mention here is the way that, while the film does raise the portent of the sexual abuse of people with ID by the system in place to safeguard them, it does not develop it further. Nor does it pursue the issue that the group’s employment opportunities at the care centre will soon be cut lest service users lose their menial but crucial social benefits. But then to do so would inevitably result in a different film, and perhaps one more in keeping with the general tendency to represent people with ID as passive, vulnerable and lacking autonomy. Part of what makes Sanctuary so successful is the fact that, beyond dispelling any misconception that ID and sexual desire are mutually exclusive, it does not advocate a strong position on any of the issues it raises. Rather, the film incites viewers to contemplate its themes further outside the confines of the cinema theatre, and challenges them with the reality that there is rarely a right or wrong response to the dilemmas it puts forward. People with ID do deserve to meet their sexual needs as much as any other member of society, but unlike other members of society some are particularly vulnerable to abuse, and even with the best of intentions, putting in place a law that takes account of both realities is testing to say the least. It is apparent that Tom respects and cares deeply for the welfare of the group he chaperones but his actions, as a carer to Larry and Sophie, are ethically questionable. As a result, the combination of his lenience and negligence, without Larry’s better judgement, has potentially fatal consequences for Sophie when the hotel’s complimentary champagne interferes with her epilepsy medication. The film concludes with Sophie being taken to hospital by paramedics while Larry is prevented from travelling with her. As the ambulance drives off with the prospect that at best, the lovers will be separated permanently, at worst Larry will be charged with rape, Collin and O’Reilly’s film refuses any semblance of closure but instead chooses to linger on the fact that the private spaces currently available to provide sanctuary for Irish people with intellectual disabilities are few and far between.

Costan, Bethany M. and Michael Kimmel. 2012. “Seeing Privilege Where It Isn’t: Marginalized Masculinities and the Intersectionality of Privilege”. Journal of Social Issues, 68.1. 97-111.