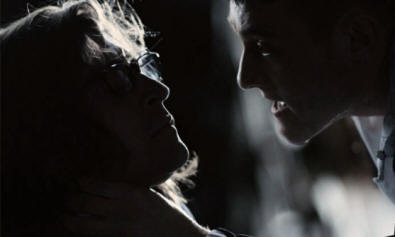 Savage, the debut feature by Brendan Muldowney, follows a photographer, Paul (Darren Healy), who is brutally mugged in an apparently random attack, and his eventual descent into brutal revenge killing.  The soundtrack is by the well established Irish composer of film music Stephen McKeon.  Described by one reviewer as “utilising a brilliantly insidious sound design” the use of low tones and discordant strings seems to tie in with the film as a generic revenge thriller.

The film score uses cultural standards to give meaning. McKeon uses violins, violas, cellos, to create an instrumental score that meanders through the low register, occasionally soaring to heights when apt, like when featuring Paul’s love interest, Michelle (Nora Jane Noone).  There is also much use of synthesized music, utilizing low drones, discordant tones, and sudden clashes, mixed with the sounds of the street, which creates an overall menacing effect.  He also uses some affiliating identifications (Kassabian, 2001) deploying two Chopin nocturnes to great effect, evoking sympathy in the audience for Paul’s mental and physical anguish. To generalize, certain cadences and low noises are taken to be threatening, while ethereal music is generally associated with the female.  We must acknowledge that this interpretation is culturally coded for an audience with musical competence to interpret it as such. Savage, in addition to exploiting and reinforcing such cultural norms, uses environmental sounds  —  part of the soundscape which is not usually seen as part of the musical score  —  in a similar way. Discussions of film sound tend to talk reductively about diegetic and non-diegetic music, dialogue and soundtrack as if these are all separate discrete elements.  While this may be the way a film is compiled, the audience does not perceive the layering of the sounds, but experiences it as an overall effect, not distinguishing sound from music.  R. Murray Schafer (2004) coined the term “soundscape” to describe what he calls “the vast musical composition which is unfolding about us ceaselessly”; environmental noises which we should appreciate and understand and not control and eliminate as a form of pollution.

In Savage, in contrast to traditional practice, the music drives the simplistic revenge narrative.  The use of music in a film is usually seen as subordinate to the visual narrative. Claudia Gorbman’s  “Unheard Melodies” (1987) illustrates the lack of importance paid to music which was seen as a (“silent”) accompaniment to the visual narrative. Film was, in the past, considered a primarily visual art and sound, the poor relation, seen as little more than a superfluous accompaniment. Altman (1985) proposes a justification for this visually oriented analysis by calling cinema a child of Renaissance perspective.  Gorbman says that the audience will not usually notice the music unless it interrupts the story.  But in Savage, unusually the music and the use of sound, in fact the overall soundscape, drive the narrative, giving meaning to the visuals.

The low hum of traffic permeates the soundtrack of Savage, with only occasional silence.  Sirens puncture the soundtrack, unsettling the audience with their ubiquity.  Occasionally the siren sounds increase in density to turn into the tinnitus that affects Paul after the mugging, overwhelming the power of the visual.  In one early scene, when Paul is in his apartment, the sirens get louder and louder, drowning out his telephone conversation, infringing his sanctuary of the home.  The composed music score uses a number of different approaches to create dissonance and an unsettling atmosphere, adding to the sense of foreboding permeating the film.  A low regular thudding/thumping sound mimics the drone of traffic.  The low drone of traffic can be interpreted ironically in a doctor’s office, where the bland doctor suggests a gym and a good diet as a cure for Paul’s problems.  We see that the outside world, with its ubiquitous violence, won’t go away.  The violence is endemic to society.

Music is not a pure system, as Adorno has claimed, (Adorno quoted in Kassabian 2001) but bears ideologies.  It establishes society while being constituted by it.  Music is gendered, and this film’s score plays along with this ideology by giving Michelle (Nora Jane Noone) a leitmotif of angelic, uplifting strings.  At times the music chosen seems hackneyed.  Michelle’s leitmotif of angelic strings leads us to the obvious assumption that redemption is possible through her.  But her leitmotif moves, and is subverted, through association with Paul in a scene where Michelle is not present.  Near the end of the film, when he sees the men that assaulted him arguing in the alleyway, the angelic music usually associated with Michelle kicks in.   Paul chases them and they seem to disappear leading us to question their presence.  Were they in his head?  The transference of her music to Paul’s internal descent denies her potential as a saviour, there has never been any possibility of escape or of redemption because of society’s ills.

The music echoes the morality of the film.  We are not given an answer to the question of the level of acceptable violence. In one of the first scenes before his mugging, Paul takes a picture of two winos fighting, a picture which ironically is of no use to his editor because of its ubiquity.  The violence increases throughout the film, culminating in the horrific double murder by Paul.  In one scene, when Paul is watching TV footage in his apartment, (journalist) Ian O’Doherty is being interviewed about the level of violence in society.  Comically, in answer to a question by the interviewer about himself, he says “If someone breaks into my house, I’ll kill them.”  He has been decrying the increased violence in society but then, deadpan, encapsulates the fundamental level of violence in society by implicating himself in it.  Echoing this, the music does not provide finality.  Unfinished cadences in McKeon’s composed score leave us with no answers.

Heightened visceral noises are used throughout the film for effect.  When we first encounter Paul’s father being fed by the nurse, the sound of his eating draws attention to his weakened physical state.  In the mugging, in the killing of the sheep by Paul in the otherwise bucolic countryside, and in the final brutal murder by Paul we hear the visceral sounds of knife on flesh.  But there are no such heightened noises in the lovemaking with Michelle.  So the lack of visceral sounds, where we would expect them, alerts us to the unreality and detachment of the Paul’s world.  We think that he might get redemption through the angelic figure of Michelle, but the lack of reality, emphasized by this lack of visceral sounds, in their encounter, means that we realise Paul is doomed to his violent fate.

In melodrama we expect resolution but Savage concludes in chaos.  This is achieved in part through the soundscape of the film with the use of discordant tunes, the slippage of leitmotif, the drone of traffic, and heightened visceral sounds.  The score in the scene where Paul walks through Dublin, before he is mugged, uses ethereal soaring strings to contrast with the violence of the late night city.  We see fighting girls, pools of vomit, and the general detritus of a city at night. The strings are like unanswered questions, with no conclusion.  Similarly, Savage uses its soundscape to show man’s war with himself.  In this the music echoes the morality of the film, which refuses closure.  There is no finality, no redemption, and we are left in a moral grey area.