by Jack Fennell. This text may be archived and redistributed both in electronic form and in hard copy, provided that the author and journal are properly cited and no fee is charged for access. 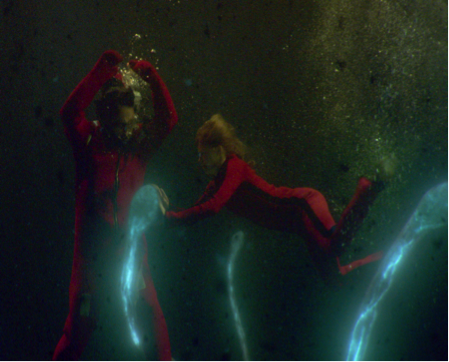 Neasa Hardiman’s feature-length debut stands in marked contrast to the colourful and bombastic television properties she had directed previously (including episodes of Tracy Beaker Returns for the BBC, Amazon Studios’ Z: The Beginning of Everything, and Marvel Studios’ short-lived Inhumans). Sea Fever takes a science-fiction/horror premise that the viewer will find familiar from the likes of Alien, Event Horizon and John Carpenter’s version of The Thing – and there are nods towards those films throughout – but Hardiman explores that premise in a remarkably sombre and contemplative way.

Hermione Corfield plays Siobhán, a PhD candidate researching the behavioural patterns of deep-sea fauna, who joins the crew of the fishing boat Niamh Cinn Óir to gather samples from the open sea. While following a radar reading of a large school of fish, the vessel is ordered to steer around an exclusion zone by the Coast Guard; due to financial problems, skipper Gerard (Dougray Scott) and his wife Freya (Connie Nielsen) decide to ignore the order and pursue their catch through the forbidden area. In so doing, they draw the attention of a massive, unidentified animal, which latches onto their hull and secretes its microscopic spawn into their water filtration system. As the crew try to make their way home, their situation becomes increasingly desperate.

Much of the popular discussion around Sea Fever has tended to focus on its apparent “timeliness”, having been released at the onset of the global Covid-19 pandemic, but while the commentary has zeroed in on the obviously resonant plot points of quarantine, infection and a rapidly spreading invasive organism, few reviewers have married this reading to the theme of a changing ecosystem. Indeed, ecological balance seems to have been the intended core theme of the film, which was completed before the coronavirus exploded into the public consciousness and eclipsed discussions of climate change: Siobhán argues for the necessity of a quarantine by using the example of invasive ant species decimating red crab populations on Christmas Island, and against killing the creature on board the boat by saying that “it’s just in the wrong place”. Absent any direct explanation for the creature’s emergence, the audience is left to infer that environmental changes in its usual niche have driven it into contact with humanity, in much the same way that zoonotic diseases will become more prevalent as isolated ecosystems come under increased pressure from human activity. Siobhán’s reason for joining the boat’s crew in the first place is to look for displaced deep-sea animals in their catch, which may account for her Ripley-esque insistence on protocol in the face of angry opposition from her crewmates: she is a scientist who has found exactly what she was looking for.

From the outset, though, the standard trajectory of this kind of monster movie is refuted. Siobhán and engineer Omid (Ardalan Esmaili) are the only ones on board with any kind of scientific training (with the others recoiling in superstitious disgust from Siobhán’s red hair), and they try a number of improvised techno-fixes that, in another film, might well have bought them some time; here, however, their efforts are in vain. As the token scientist on board, Siobhán might be expected to work out what their assailant is, and thus, how to defeat it; however, beyond the reach of any network and armed with just a microscope and a laptop, she can only guess that it is “some kind of cnidarian,” and her suggested solutions repeatedly prove inadequate. Other deviations from the standard plot abound: the first character to die is the amiable love-interest; the protagonist has no interest in killing the monster, and there is no hint of any conspiracy – rather than a cover-up attempt, the exclusion zone is for the benefit of a pod of calving whales, implied to be the creature’s usual prey.

More importantly, Sea Fever deviates from the standard “monster in the house” film in terms of its tone. There are no heroic triumphs or thrilling victories on offer here: the only thing the crew can do is make for dry land, and even then, Siobhán fights to prevent them from going ashore until they can be sure that none of them are contaminated. Rather than rugged survivors overcoming impossible odds, these characters are defined by their regrets, self-doubt and past traumas. The boat is named after Gerard and Freya’s deceased daughter Niamh (Cinn Óir or “golden head” referring to her blonde hair), and the figurehead is painted to resemble her; the circumstances of her death are not discussed, but Freya makes a pointed reference to drowning and Gerard has a noticeable scar on one side of his head. Crew member Ciara (Olwen Fouéré) alludes to having lost the rest of her own family, while Sudi (Elie Bouakaze) is in love with a woman who is unaware of his feelings for her; Siobhán struggles with loneliness that she does not know how to express, and Omid, in spite of his impressive engineering skill, is unable to find a better-paying job to support his wife and children. The characters all understand, on some level, that they are doomed. Quiet despair is a tough thing to get right, but the cast all deliver nuanced and affecting performances – from Scott privately admitting his feelings of guilt, to Sudi facing his own mortality, to a demoralised Freya abandoning ship. Interestingly, the goriest onscreen death is reserved for the only happy-go-lucky character in the cast; viewers who are particularly sensitive to the “injury to eye” motif will find this uncomfortable viewing.

Visually, the film for the most part is matter-of-fact and filmed in natural light. The lighting, palette and texture of the cinematography communicate the feeling of a low-key drama and emphasise the mundane: all the better to contrast with the anomalous monster, of course. The monster itself is only partially shown, in a scene where Siobhán dives underwater to inspect the damage to the hull, and sees scores of bioluminescent tendrils radiating from an unlit body in the dark. The visual dichotomy between the surface world and the depths is further underlined by the “dirtiness” of the sea: in every underwater shot, the water is full of shredded kelp and sundry particulates, and the water churned up by the boat’s engines, filmed from below, looks almost like smoke. The contrast between above and below also applies to the set design of the boat itself – above decks, the Niamh Cinn Óir looks like any other fishing vessel of its size, while below, it opens out into a number of spaces that seem bigger than they should, with Omid’s unique water filtration system being a focal point for much of the action.

An interesting variation on the subgenre, Sea Fever evokes the science-fiction/survival-horror film without indulging any of the attendant clichés, and ends up being something rather different: whereas horror films are driven by characters who believe they still have some slim hope of surviving, the fatalistic tone of Sea Fever means that ultimately, the viewer ends up watching a cast of sympathetic characters coming to terms with the inevitable. Whichever broader significance one reads into the film’s plot – Covid-19, environmental collapse, or something else – the mood will render it all the more disturbing.