Secrets of the Irish Landscape by Matthew Jebb and Colm Crowley (eds.)

Secrets of the Irish Landscape by Matthew Jebb and Colm Crowley (eds.)

by Patrick J. O’Connor. This text may be archived and redistributed both in electronic form and in hard copy, provided that the author and journal are properly cited and no fee is charged for access. 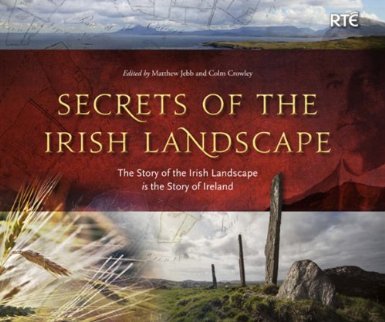 Amplified with the subtitle “the story of the Irish landscape is the story of Ireland,” this book purports to provide a comprehensive revelation of the Irish landscape. Landscape is an attractive, seductive and ambiguous term, and the Irish landscape for those who learn to read it aright may be the richest record we possess. After a day traversing one of our signature peninsulas the poet, Seamus Heaney, wrote “You will uncode all landscapes/ By this: things founded clean on their own shapes,/ Water and ground in their extremity.’Thus the poet may lay claim to the art of landscape divulgence, just as the editors of this volume lay claim to the unfolding of a “remarkable story.”

Jointly edited by Colm Crowley, Head of Production, RTE, Cork, and Matthew Jebb, Director of the National Botanic Gardens, Dublin, this cornucopia of secrets of the Irish landscape largely reflects their duality of interests. Crowley needed a “good story” to freight a television series for RTE, and in giving it orientation Jebb summoned the formidable figure of Robert Lloyd Praeger, one of Ireland’s greatest naturalists and wanderer, author of the classic book The way that I went, first published in 1937. Praeger rendered the botanical wonderland of Ireland. This book pays due homage to him.

It is a pity, however, that both television series and book miss out on one of Praeger’s talismanic sites, the Hill of Uisneach, near Ballymore, Co. Westmeath, which is set in a wonderfully bocage landscape, and proclaims the heart of Ireland. It is the hill at centre, Ireland’s best-kept secret (apart from the joint archaeological excavations of Praeger and R.A.S. MacAlister). Their findings reveal that it is layered in multi-period trace elements. It is, moreover, dotted in knarry thorns, and an enduring enigma to stake a primal claim.

Matthew Jebb’s introductory essay parades the Irish landscape as a “fabulous palimpsest.” It draws in particular on the Clare Island Survey, which was masterminded by Praeger in 1909, to count as one of the most significant biological surveys ever undertaken in Europe. Jebb points the way to secretive places – Lough Boora, Mount Sandel, Céide Fields and Corlea. He points up the “strange meandering ribbons of gravel that lie across the midlands of Ireland like inverted – riverbeds.” These are eskers, once primal roads, and residual havens of limestone-loving plants that festoon the vast prairies of raised central bogland.

To follow, and running to a total of 23 chapters, there is a veritable pot pourri of insight into the natural, biotic and cultural dimensions of the Irish landscape. The impact of the Quaternary Era shows greatest coherence with three separate contributions from specialists.  Of these, Paul Dunlop’s on  “the glacial landform system of the last Irish ice sheet” strikes best pertinence for its exposition of the fine, fresh glacial topography of moraines, eskers and drumlins that still bestows modality to much of the Irish landscape. Indeed as Dunlop points out, the term “drumlin” originated in Ireland, and yields a much-loved topographic and toponymic region, usually referred to by the term of “drumlin belt.”

Thereafter stand-alone chapters mostly prevail. Topics as diverse as evolution of the Irish coastline, our first forests, our exotic heritage of Arctic and Mediterranean plants, and dendrochronology or tree-ring analysis, help to set in place Ireland’s physiographic and biological inheritance. A trio of archaeologists detail the formative stages of human occupancy. There are contributions on Ireland’s Stone Age settlers, our first farmers, and the series of transitions that underpinned the human and artefactual dimensions of Bronze Age-Iron Age-Gaelic Ireland.

For the chapter on the impact of Christianity by Tomás Ó Carragáin, “a cross-carved landscape” serves as metaphor. The great monastic site of Clonmacnoise is posited as the supreme exemplar. Its cathedral is the largest surviving early medieval building in the country. Appropriately a stunning photograph of the fronting Cross of the Scriptures sets off the scenic splendour. Cathedral and Cross were commissioned in 909 by King Flann Sinna of the Southern Uí Néill, in collaboration with the abbot Colmán. On the cross O’Neill is commemorated as “king of Ireland,” a telling illustration of the fusion of lay and ecclesiastical power. A chapter on the “Viking impact” similarly emphasises its constructive effect on urban genesis and trade.

This book of essays is nothing if not eclectic in the variability of topic it espouses, a point illustrated by such eye-catching contributions as Michael O’Connell’s exposé of the Burren, north Clare. That is a cultural as well as a biogeographical landscape, full of reclusive places. Superb montages of photographs parade their charm. A cognate world is that of turloughs (temporary wetlands to produce a lake-strewn winter landscape), and Micheline Sheehy Skeffington is to be commended for her map of all recorded examples in 2006, which shows a high correlation with distribution of the element poll in townland names. Pioneering archaeologist, Seamus Caulfield, also takes the reader to a western setting, the Céide Fields of north Mayo, contenders for the title of “Europe’s oldest surviving dairy fields!” The beckoning West is summoned further in the dry stone-walling technique to delimit the fields of Árainn at Iris Oirr, a setting in which Féile na gCloch is hosted every September.

Standing singularly, Eamonn Kelly’s “The cruel goddess: death at the boundary” offers a tantalising extension to Padraig Ó Riain’s work on boundary association in early Irish society; the theme of food production is essayed in the contributions of Regina Sexton and Éanna Ní Lamhna; contributions on the paper landscape of Ireland as represented by estate maps and the austerely beautiful Ordnance Survey 1:10,560 sheets c.1840 are made by Patrick Duffy and Matthew Jebb respectively; and juxtaposed at the end, “Famine and Landscape” by Richard Collins and “Landscape and Irish Identity” by Peter Murray, make for an incongruous pairing.

Overall therefore there is a dearth of thematic unity to this well produced, large-format book, which is lavishly illustrated with maps and photographs (many in full colour), and permeated by the questing spirit of Robert Lloyd Praeger. As “fabulous palimpsest” in Mathew Jebb’s term or “book or parchment much written upon and written over,” the Irish landscape is thoroughly humanised. We live in a superbly coded land. The portrayal of its secrets in this inter-disciplinary and multi-authored volume should induce the discerning reader to go outdoors, look, and see. Then think about what we see.