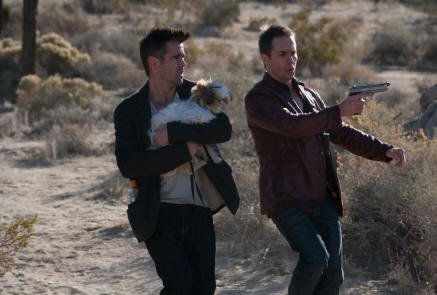 In 2012, Martin McDonagh returned to the big screen with his second feature Seven Psychopaths, a film set in Los Angeles and immersed in American culture but hardly devoid of things Irish.  Colin Farrell returns as McDonagh’s leading man, Marty, here playing a character who has much in common with his creator and director:  He’s called Marty; he is writing a screenplay; he lives in Los Angeles.  Most importantly, he’s trying to move beyond the clichés of film violence, to be done with “violence, guns, all the usual bullshit”. On occasion, Marty’s friend, Billy Bickle (Sam Rockwell), employs a stage Irish dialect in one of the film’s forays into self-conscious sentimentality (“Ah, bejesus, sure, you’re me best friend”).  Charlie derides both Marty’s pacifism and his ethnicity:  “You don’t believe in guns?  They ain’t fucking leprechauns, you dumb Mick”.  Perhaps most memorably, Billy cautions Marty about his drinking:  “It’s part of your heritage….  You’re fucked from birth.  The Spanish have got bullfighting.  The French got cheese.  The Irish have got alcoholism.”

McDonagh’s theatre audiences will recognize features of the plays that insinuate themselves throughout Seven Psychopaths. Again, as in A Behanding in Spokane, McDonagh portrays interracial couples: Myra (Linda Bright Clay) and Hans (Christopher Walken) as well as Maggie (Amanda Warren) and Zachariah (Tom Waits).  Again, we witness horrific violence, including the dismemberment of a corpse with a saw.  The badly injured Mairtin in A Skull in Connemara averred that “hospitals are for poofs, sure” (62); here Charlie Costello (Woody Harrelson) reports that “Peace is for queers” and Marty is quoted as saying dream sequences in films are “for fags”. Just as Mad Padraig’s deepest love in The Lieutenant of Inishmore was for his tabby cat, Wee Thomas, the most violent psychopath among many, Charlie, is besotted by his Shih Tzu named Bonny. Like McDonagh’s earlier work, Seven Psychopaths is structured like a matryoshka doll: smaller stories nest in larger ones.  The Pillowman, for instance, embeds nine of Katurian’s gruesome fairy tales; Seven Psychopaths contains flashbacks of Hans and Myra as revenge stalkers and of Zachariah and Maggie as serial killers of serial killers.

McDonagh again creates a dense network of allusions to cinematic history that runs from Takeshi Kitano’s Violent Cop (1989) back through The Godfather (Francis Ford Coppola 1972) and Taxi Driver(Martin Scorsese 1976) to Howard Hawks.  He hilariously rejuvenates the clichés of tough-guy dialogue (“Throw your guns down or the alcoholic gets it”).  The final shootout, often referred to and anticipated as the final shootout, unfolds in the badlands of Joshua Tree National Park in the Mojave Desert, a landscape and situation visually evocative of John Huston’s The Treasure of Sierra Madre (although Huston’s film was one of the first US films shot entirely on location).  Seven Psychopaths is, from its opening shot of the HOLLYWOOD sign, a movie about movies.  When Billy asks what happens to the seven psychopaths at the end, Marty confesses “I don’t know what happens to them at the beginning”.

Seven Psychopaths ventures into a self-referentiality that explores McDonagh’s weaknesses as a writer and filmmaker. On occasion, his characters simply spring from a captivating mental picture:  “I just like the image of a Vietnamese guy in a priest’s outfit with a snub-nosed 44”, says Marty.  Although McDonagh’s Irish plays were populated by egg-smashing or rifle-wielding colleens and a savage mother-daughter pairing in The Beauty Queen of Leenane, his women characters in The Pillowman, A Behanding in Spokane, and In Bruges receded in clarity and dimensionality.  After perusing Marty’s screenplay, Hans describes Marty’s women characters as “awful … they get shot or stabbed in five minutes.  Most of the ones I know”, says Hans, “can string a sentence together”.

Like In Bruges, Seven Psychopaths has the trappings and baggage of a buddy movie, a term that McDonagh himself has used to describe the depiction of the relationship between Marty and Billy: “decency, love for each other should be palpable throughout” (Interview with Kurt Andersen, Studio 360, National Public Radio, 25 October 2012).  Indeed, in a quiet moment as the film nears its conclusion, their friendship is made explicit:

In reading Billy’s Secret Diary: Keep Out Pigs!, Marty discovers Billy’s resolutions to help Marty to drink less and, in a “note to self”, not to set fire to the neighbor’s American flag.  Billy is both a sincere friend bent on self-improvement and the Jack of Diamonds killer, both Psychopath Number One and Psychopath Number Seven.  When finally challenged by Marty, Billy says “I killed all those people to spur you on a little bit and give you something to write about”, a statement richly resonant of conversations between Michal and Katurian, the brothers in The Pillowman.

While the first half of Seven Psychopaths is indeed, as Marty says, a perfect set-up for a shootout, its second half dwells on the teleological speculations of its trio of would-be screenwriters: Billy, Hans, and Marty. Billy’s moral compass knows only the North Star found in the formulas of film violence (“You don’t take the chief fucking villain to a fucking hospital”). In comparison, Hans, whose daughter and wife are both murdered, is positively ruminative. With Myra, Hans hopes that they will again be with their murdered daughter in the afterlife and consoles his wife, “God loves us ….  He’s just got a funny way of showing it”.  The direct descendant of Ken (Brendan Gleeson) in In Bruges, Hans has renounced revenge.  Admitting that the pursuit of his daughter’s killer was a waste, he endorses Gandhi’s belief that “an eye for an eye leaves the whole world blind”.  Hans’ peyote-fuelled vision of Myra in a grey place challenges his belief in an afterlife, but his dying words suggest something else again.  Marty routinely ponders the final questions and acknowledges that his writing gravitates towards Heaven and Hell, both of which are capitalized in the film’s subtitles.  Of Myra’s death, Marty says, “I guess she’s in heaven … I’m not sure what I believe”, but over Hans’ corpse he makes the sign of the cross.

The opening dialogue, in which two thugs discuss people who were shot through the eye, people like John Dillinger and Mo Green, initiates a concern with distinction between “real life” and the movies, and mirrors the question of the relationship between Martin McDonagh and Marty. McDonagh uses, for instance, “real” serial killers: The Texarkana Moonlight Murderer (1947), the Zodiac killer (1975), but also reaches back to the 1930s to track down the Butcher of Kingsbury Run, now an old man in prison.  Looking for a character who is an unlikely assassin, Marty outlines one of his psychopaths as first a Buddhist, then an Amish, and finally a Quaker father driven to violence by the rape and murder of his young daughter.  After Marty uses the Quaker’s story as his party piece, Billy protests that he told Marty the story months earlier (“there may be copyright issues”).  The next time Marty tells the story, Hans undoes its tidy irony by revealing himself as the bereaved father who slit his own throat and corrects Marty: “some of the details aren’t exactly right … our beautiful daughter was black” and Myra worked side-by-side with Hans.

Most of McDonagh’s psychopaths respond to the depravity of others: the Vietnamese “priest” to the murders of his family in the My Lai massacre; Myra and Hans to the murder of their daughter; Maggie and Zachariah to her brutal captivity.  This pattern is central to the comparison of McDonagh and Quentin Tarantino, whose influence McDonagh acknowledges and whose seventh full-length feature,Django Unchained (2012) won the Academy Award for best original screenplay.  Commentary on McDonagh almost invariably links him to Tarantino for their graphic portrayal of violence and their immersion in popular culture, especially film history.  (Surely we can anticipate conference papers comparing the second scene of The Lieutenant of Inishmore with the sequence in Django Unchainedthat features an overhead shot of Django [Jamie Foxx] trussed, upside-down, naked, awaiting castration.) Tarantino’s stock-in-trade draws the viewer into empathy with a victim (African-American slave, Jewish child, pregnant woman) of human depravity, so that the viewer welcomes, relishes, and thereby is implicated in violence against Nazis, sadistic slave owners, et al.  McDonagh’s and Marty’s meditation about film violence in Seven Psychopaths suggests that, as for Zachariah, delight in violence against the violent offers diminishing returns and that psychopaths become, as Hans says, “tiresome”.

Just as Pillowman offered alternative endings and The Lieutenant of Inishmore provided two endings (depending on whether Wee Thomas ate his Frosties), Seven Psychopaths has no fewer than five endings.  The first proposed ending, Billy’s version, is scripted expressly as a screenplay:  “Exterior.  Cemetery.  Night.  The Shootout”.  In a sequence crosscut between Hans and Marty listening to Billy around a campfire (underscored by Carter Burwell’s exquisite music) and Billy’s imagined film ending, a bloodbath filled with “money shots”:  suddenly all the psychopaths “burst out of their graves with a gun in every hand”; Kaya, wearing a wet t-shirt, convulses as “she is fucking mown down.  Fucking mown down”; Charlie is shot through the neck with an arrow − a veritable cinematic trope that imdb.com identifies in no fewer than nine films, including Howard Hawks’ The Big Sky(1952) − just before his head explodes. In Billy’s version, Marty grabs two automatic weapons and becomes one of the psychopaths.  (Here the seven are the Vietnamese man, Maggie, Zachariah, Hans, the Jack of Diamonds killer, Charlie, and now Marty.)  The second version comes from Marty (or Martin McDonagh) as another final shootout is played out against one of the spectacular rock formations in Joshua Tree, the perfect place for a shootout.  The violence culminates with a standoff with Charlie ready to shoot Billy who holds a flare gun to the head of Charlie’s beloved dog.  Closure in this sequence finds Billy, shot through the head, dying happy as Bonny finally responds to his command “Paw. Paw”.  And that might have been the end of the film, but Marty drove off to find that Hans left behind a third ending on a tape recorder bearing the message: “MARTY DOES THIS HELP?”  Thinking back to the Vietnamese priest and hooker, Hans imagines her, now a Yale graduate fluent in Asian languages wearing a red dress, telling the terrorist priest in flawless Vietnamese:  “Desist brother.  You know this will not help us.”  In Hans’ ending, the blink of an eye transports the Vietnamese man from a Phoenix hotel to a Saigon street fifty years earlier.  Now he is a Buddhist monk, the first to self-immolate in protest against the war.  When a fellow monk pleads with him, “Desist brother.  You know this will not help us”, the first monk whispers “it might” just before striking a match.  In the fourth ending Marty’s desk has framed photos of Billy and Hans, now both dead.  Marty says good-bye to Bonny and walks off with his now-complete screenplay, past the charred remnant of Billy’s neighbor’s American flag.  The music swells, the credits roll.  But suddenly the celluloid film stock jams and melts as a phone call to Marty from Zachariah Rigby interrupts the credit sequence.  Zachariah reminds Marty that he promised on his life to incorporate a message to his long-lost Maggie in the completed film. Marty realizes his oversight and accepts that Zachariah will come to kill him on Tuesday.  Zachariah, however, lets him off the hook: Tuesday doesn’t work for him and with that the credits resume.  The last of the these endings offers the least closure of any of the five, but a promise in McDonagh is always a promise.