by Audrey McNamara. This text may be archived and redistributed both in electronic form and in hard copy, provided that the author and journal are properly cited and no fee is charged for access. 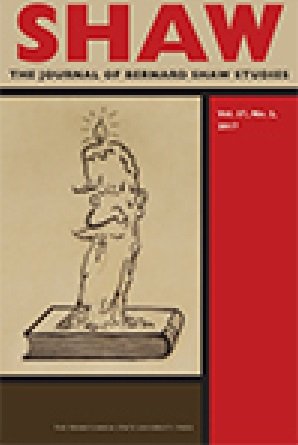 This special issue of The Journal of Bernard Shaw Studies is a unique collection of six essays from eminent Shavian scholars dealing with what Rodríguez Martín describes, in his introduction to the volume, as the “deep ramifications” classical literature has “in Shaw’s dramatic and non-dramatic discourse” (1). Rodríguez Martín creates a strong foundation for the volume by tracing Shaw’s exposure to the classics from his “formative years through to the reverberations in the form of his critical reception, long after his death” (2). Quoting Shaw from Sixteen Self Sketches, Rodríguez Martín clearly demonstrates Shaw’s interest, and indeed pride, in learning Latin, when in Wesleyan Connexional School he rose to the head of his class. (2). In exploring Shaw’s engagement with music and in particular his interest in Wagner, and classical Greek sculpture, Rodríguez Martín underpins the very core of Shaw’s writing, in all its forms. He describes The Quintesence of Ibsenism (1891) as Shaw’s “early dramatic creed” (3) as it “showcases the influence of classical philosophers” (4). The evidence strengthens as examples of Shaw’s allegiance to the classics is demonstrated frequently through the introduction, not least the mention of his meeting with Gilbert Murray, a leading classical scholar whom Shaw wrote to in 1940 commenting on the “revolutionary burst of playwriting activity in London” (6) telling him “the only ones likely to survive … are the old Greek ones in your translations” (6). The introduction, which Rodríguez Martín states leans “toward the classical references in Shaw’s critical writings” (7) creates a very effective forum for the discussions to follow on Shaw’s dramatic work.

Nigel Slater investigates an interesting interpretation of Heartbreak House and its connection to antiquity in his essay “Nostoi and Nostalgia in Heartbreak House”, aligning the notion of the “master metaphor of England as a ship” with the “classical trope of ship of state” (11) and Homer’s Odyssey. He highlights the classical unity of time and place to further draw attention to Shaw’s connection and interest in the classical form noting that all the action takes place over a twenty-four hour period in one place; the house. Slater creates a further strong link to classical Greek style by drawing interesting connections between Shaw’s Heartbreak House and Plato’s Republic. In keeping with the metaphor of the ship as a state, Slater considers the Platonic trope of a mutinous crew, who kill other sailors, keep the shipmaster “intoxicated or drugged” in relation to Shotover’s insistence that “he drinks not for intoxication but to supress the dangers of sleep and dreams” (14). By returning to the parallels with the Odyssey and the trope of story-telling or “advantageous lies” (15), Slater highlights the connection of the other characters to the “Odyssean elements” (17) that are prominent in the play and further serve to strengthen his argument. He maintains that the Odyssean notion of “returning” or Nostoi are “important structuring elements of the narrative” (19) of the play and discusses the fact that “the characters keep returning to the stage” to speak to “ a yearning for a return to an earlier state … a cultured, leisured Europe before the war” (20). The essay provides much foundation and thought for the work that is to follow it.

Peter Gahan’s “Bernard Shaw’s Dionysian Tragedy” also deals with Heartbreak House but as part of a trilogy with Major Barbara and Misalliance. Gahan convincingly makes connections to how Shaw drew on Gilbert Murray’s considered and perceptive translations of the classical plays, in particular “the Dionysian with its religious implications” (28). He acknowledges that “Shaw had begun drawing on Dionysian themes ten years before his encounter with Murray” (42) but argues that this only heightened his engagement with Murray’s translations. Gahan’s essay is divided into six sub topics that work well to draw out his argument on Shaw’s use of Dionysian “religion” (29) in the plays under discussion. Interestingly, in creating an argument that binds Modernism to Dionysian, he ties the plays together stating that “Heartbreak House combines Misalliances play of sexual attractions with Major Barbara’s weapons and explosives” (49). The richness and depth of this essay explores the historical and the biographical to form a very informative and strong argument not only for Shaw’s appropriation of the classics but the influence Gilbert Murray had on his work. In his concluding section, “Shaw’s Dramaturgy”, Gahan contends that “Shaw used Euripides Bacchae as a type of palimpsest, on which to write three discursive plays on modern life” (59) but perhaps more importantly is his earlier assertion that “the importance of Shaw’s dramaturgy, not to mention to the English speaking world of twentieth century modernism, of Shaw’s exposure to Euripides through the medium of Murray would … be hard to exaggerate” (39).

Matthew Yde constructively argues that “Plato was perhaps the greatest single influence on Shaw’s political thinking as well as on his dramaturgical strategy” (75) in his essay “Dialectical Drama and the Ideal State: The Platonic Dimension of Shavian Dramaturgy and Political Theory”. In referring to the school of thought that believes that “Plato was absolutely opposed to theatre” Yde reminds the reader of Plato’s Republic and that it was always “his goal to provoke thinking” (76). His insightful essay is divided into two sections; Form and Content using several of Shaw’s plays to argue astutely for the fact that the dramatic form for both men was “exploited for the higher purpose” of social reform (77). He effectively traces the effect of Socrates on Plato who, in turn, influenced Shaw creating a trichotomy of influence that can be seen in the “Shavio-Socratic dialogue – or dialectical argument” employed in examples of “Major Barbara, Misalliance and Getting Married” (81). Concluding his argument, he states that Shaw’s plays reflect “his passion for reforming the world, the same passion that motivated his mentor, Plato” (96).

Daniel Leary’s essay title is interesting and persuasive in itself, Virgilian Echoes: Arms and the Man and the Aeneid. As his argument unfolds the echoes become sounds and he convincingly draws parallels to the work of Virgil. Although Leary states in his introduction that the work is divided into four sections, there are just three headings: Literal, Allegorical, Moral but the final section is defined as the Anagoge in the opening sentence. Leary has a unique, informal and entertaining style of writing that demonstrates how a testing of ideas can arrive at a strong argument. He demonstrates great insight to Shaw’s approach of “borrowing from the masters” (109) and argues that Shaw never allows “the action to be resolved” (111). Drawing comparisons, he maintains that in Virgil’s Aeneid “the ending would continue to unsettle readers for two thousand years” (114) and believes that was as intentional on Virgil’s part as it was with Shaw’s approach to his own work. Interestingly, he does not conclude but grants, what he terms as an intermission, so that the reader can pause for thought on Shaw’s use of the epic formula to convey how society is in reality rather than how it is idealistically perceived.

An appealing and substantiated link is made by Biljana Vlaskovicilic in her essay “Shaw’s Joan of Arc and Heaney’s Antigone” drawing Seamus Heaney and Bernard Shaw together in the use of classical literature in their work. Both Irishmen won the Nobel prize for literature, Shaw in 1925 and Heaney, seventy years later, in 1995. Vlaskovicilic convincingly draws comparisons between the reception of both men to the prize, Shaw’s deliberate silence and Heaney’s lack of sentimentality in his acceptance speech. Heaney’s disillusionment with the political and social scene at the end of the twentieth century when he stated that “history is about as instructive as an abattoir” echoes Shaw’s agreement with Hegel when he stated “that men never learn anything from history” (137). She argues that both playwright and poet “devoted their art to revealing the true face of humanity’s ‘progress’” (138). She draws on the historical, political and religious background of both men, and through a detailed analysis of Shaw’s Saint Joan and Heaney’s translation of Antigone, argues that though the men differ in respect of these, they both “often direct their attention to the classics and the past in search of a solution to the problems of the modern age” (139).

Kay Li’s thought provoking consideration on Shaw’s use of the classical myth in her essay “The Shavian Protagonists and Shaw’s Changing Use of Classical Myths” argues that this ultimately led to him creating his own myth of “the Life Force and Creative Evolution” (156). She uses a little known play by Shaw, Passion Play (1878), to demonstrate the “embryonic Shavian Creative Evolution” (158) and maintains that “by the end of the nineteenth century, Shaw had already worked out quite a substantial theory on the Life Force and Creative Evolution” (162). Gilbert Murray’s influence on Shaw again appears in the discussion through an analysis of, what Kay Li terms as “Shaw’s most ‘classical’ play” (162) Major Barbara. However, Kay Li also discusses the attack on Gilbert’s approach in 1915 when the “interest of the modernists in classical literature” (163) was aroused so that, by 1917, she contends that Shaw had begun to deconstruct the classical myths to make way for his own myth of the Life Force and Creative Evolution. An interesting reading on this deconstruction is taken on Heartbreak House and Back to Methuselah of which she argues that “the classical myths are exploded and pulled apart” (176).

Kay Li’s concluding line “Through the Arcadian setting at the end of Back to Methuselah, Shaw shows that the gospel of Creative Evolution and the Life Force are as far as his thought can reach” (178) is a fitting final line for this important volume of essays in The Journal of Shaw Studies. Each essay, while different in style and thought process, contains important links with the others in the work and in so doing builds very strong evidence for Shaw’s use of classical myths and literature in his writings, both dramatic and non-dramatic. This is further compounded by the useful and interesting “Selected Bibliography” of Shaw’s reading material that Rodríguez Martín has chosen to complete the volume. There is no doubt that this collection will be invaluable to all researchers that are engaged with Shaw. An added bonus to the structure and depth of the volume is its appeal to all those interested in classical studies, whether they are Shaw scholars or not.