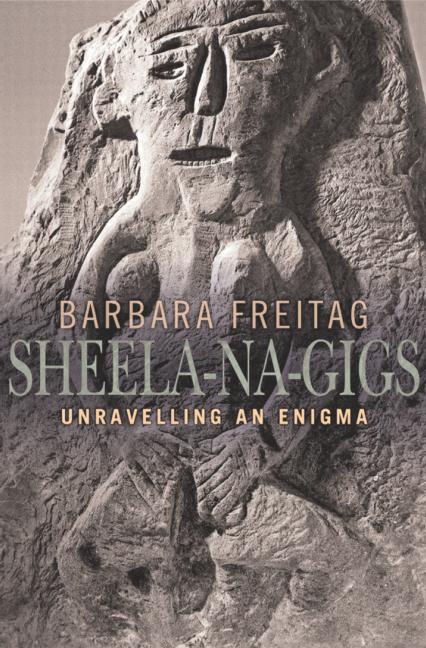 “Caught in stone / I celebrate / all who tell the truth / over centuries / of darkness”: These are the closing lines in Susan Connolly’s poem “Female Figure” (1992), where the protagonist – an Irish Sheela-na-gig – denounces the puritanical ideologies which considered her repulsive, to be hidden or destroyed. In the poem the Sheela’s powerful voice is determined to produce her own interpretation of her female corporeality by rejecting all that came before, a project we might add fraught with difficulties. However, these problems are not exclusively confined to the world of the poetic imagination and finding out the ultimate meaning of these stone images has proved to be a curious enigma for archaeologists and historians.

The stone carvings known as Sheela-na-gigs are naked female figures characterised by their display of female genitalia, usually quite exaggerated in size. Most of these icons can be found on the walls of medieval churches and castles, though some have appeared in isolation, detached from their original location. There are examples of medieval Sheelas in different parts of the Continent, but the Irish countryside is particularly rich in them. An air of mystery has surrounded the so-called “exhibitionist” figures since they began to attract serious scientific attention more than a hundred and sixty years ago. Although theories have not been scant, there is still disagreement on their origins and functions, so that the figures have remained – and will probably do so for a long time – controversial.

Given the elusive nature of Sheela-na-gigs any publication that casts new light on the topic is most welcome to the scientific community and cultural historian alike. And this is the case with Sheela-na-gigs: Unravelling an Enigma, Barbara Freitag’s most recent academic answer to the many questions that surround the name, dating, origins and functions of Sheela-na-gigs. The book offers a comprehensive catalogue of the Sheela-na-gigs of Ireland, England, Scotland and Wales, including references to earlier classifications of the carvings – such as those by Guest (1936), Andersen (1977) and McMahon & Roberts (2001) – together with descriptions of previously unrecorded figures, so that the reader can have access to a complete and up-to-date listing of Sheelas. The visual plays a major role in the perception and understanding of these icons and in order to help the reader get a sense of their meanings, past and present, Freitag’s study also includes excellent images of some of the most striking stones.

In Sheela-na-gigs: Unravelling an Enigma Freitag goes over the main interpretative frameworks that have been used so far to “unravel” the enigma posed by the intriguing medieval stones and expands on them with a lot of detail. Some of the most committed studies on the subject, she reminds us, link the Sheela-na-gigs to the developments of Romanesque art on the Continent and consider them as examples of the negative attitude towards the female body as articulated by early Irish Christianity. On the other hand, the exposure of the vagina has also been perceived as a sign that these figures were used as apotropaic or protective icons against evil. Then, too, a number of researchers (mostly women) have related the Sheelas to pagan fertility rites in which female corporeality was seen as reminiscent of Goddess imagery. While examining all previous literature on the subject, Freitag also offers her own interpretation: her belief that the “Sheela-na-gig belongs to the realm of folk deities and as such is associated with life-giving powers, birth and death and the renewal of life” (2). She offers a detailed description of the hazards of motherhood in medieval times (68-118) and inserts the Sheelas into this particular social context. According to this investigation, Sheela-na-gigs were primarily used as major divine assistants at childbirth, following the theory that from medieval times women from all over Europe are known to have sought the help of magic icons in their hour of need. The exposed vagina, Freitag contends, would show “the desirable degree of dilation of the cervix immediately before, during or after childbirth” (88). Her study is supported by ample bibliographical sources on medieval childbearing that confer scientific accuracy to this interesting new view.

Apart from Freitag’s own vision of the Sheela question, one of the most interesting aspects of this book lies in its rejection of previously accepted interpretations on the basis of what the author considers archaeological, historical or terminological inconsistencies. One of the most reputed theories on the origins and functions of Sheela-na-gigs is developed in Jorgen Andersen’s acclaimed study, The Witch on the Wall, for some a book that still has not been bettered. Andersen’s contention is that the carvings were warnings of lust and sin that eventually took the shape of the apotropaic power of the nude. However, this theory, which has found its way into museum guides and dictionaries of art, is discarded by Freitag because of the weak grounds on which, she maintains, such argument lies. Her statement that this generally accepted interpretation is based on unconvincing reasons that actually contradict folk tradition will no doubt be thought-provoking for anyone researching into this fascinating topic. Therefore, Sheela-na-gigs: Unravelling an Enigma casts new light on a subject that continues to promote the interest of artists and academics.

The merits of Freitag’s study are various. However, the dismissal of previous research – intimated through expressions such as “weak grounds”, “harboured doubts”, “incongruous” or “it defies all logic” – is perhaps too rigid in the interpretation of an icon whose very strength may dwell precisely in the various functions it has fulfilled over the centuries and until the present. Although Freitag supports her views with excellent bibliographical evidence, a pluralistic methodological approach that takes more into account the various theories would probably offer a more comprehensive view of the problem. The icon known as Sheela-na-gig is a symbol upon which different meanings have been imposed and superimposed and, perhaps, it is not always clear where to draw the line between the different interpretations. Claiming that the Sheelas were invoked as magic assistants of childbirth is not so different from stating that they were used as protective icons against evil. Are not assistance and protection equivalent terms in the context of childbirth? The different interpretations could be seen as new layers of analysis to disentangle or, to use Freitag’s expression, to unravel the enigma, and it would be interesting to devote further research to the combination of pagan and Christian meanings in the study of the many Sheela-na-gigs that flood the Irish countryside.

Barbara Freitag’s book is a valuable source of information for anyone interested in this important part of the Irish archaeological heritage. In the last few decades there has been a growing interest in these icons on the part of academics from different areas, as well as poets and visual artists. The women’s movement in Ireland, together with recent theoretical developments on the body on both sides of the Atlantic, has triggered new (artistic) interpretations of the Sheela-na-gigs, which are now used to illustrate the articulatory possibilities of female corporeality, previously despised and hidden by the religious ideologies of the Christian west. Irish poets and visual artists have cast new light on the stone images and have seen in the Sheelas an appropriate icon to pose their feminist and/or postcolonial vindications. The contemporary Sheela-na-gigs are given a voice of their own in poems and lithographs, sometimes reclaiming the power of female corporeality, sometimes bringing to the forefront the female dimension of pre-Christian cults. The puzzle formed by these medieval stones has now gained a new and rigorous piece that will no doubt contribute to our understanding of the Sheelas.

McMahon, Joanne and Roberts, Jack. 2001. The Sheela-Na-Gigs of Ireland and Britain: The Divine Hag of the Christian Celts. An Illustrated Guide. Dublin: Mercier Press.